Today's announcement of this year's Pulitzer Prizes reminded me that the events that led to the creation of the prize were set in motion here in Down East Maine in 1902.
Chatwold, Entrance front from Sheldon's Artistic Country Seats
In 1893, Joseph Pulitzer, arguably the most powerful newspaper publisher in America, and his wife, Kate Davis, cousin of Confederate President Jefferson Davis, came to Bar Harbor for the summer, renting the Louise Bowler Livingston estate, spectacularly located on a cove off Ocean Drive south of town. 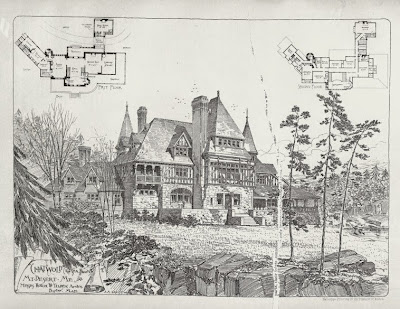 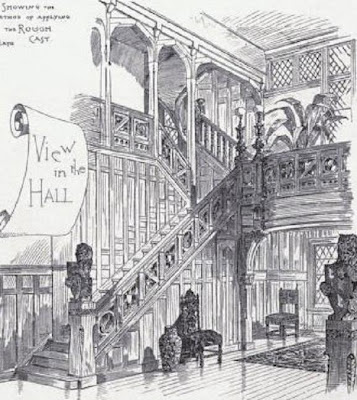 Views of Chatwold from American Architect & Building News,  1882
The estate, known as Chatwold, had been designed for Mrs. Livingston, when she was Miss Bowler, in 1884 by the prominent Boston architects Rotch and Tilden.  Much admired, it was published in many of the foremost architectural publications of the day, including George Sheldon's Artistic Country Seats.  Of stucco and half timber construction over a first floor trimmed in the local pink granite, the turreted affair consisted of 27 rooms and an astonishing 7 bathrooms on its three main floors.  The Pulitzers liked the property, and bought the estate from Mrs. Livingston the next summer. 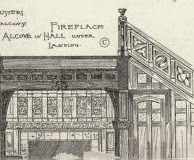 Fireplace alcove under stairs.  American Architect
Pulitzer suffered from a nervous disorder and blindness, and was extremely sensitive to sound.  He was said to be happiest on water, especially on his 267 foot steam yacht, the Liberty, which was kept anchored and ready offshore.  To achieve ideal quiet on land, McKim, Mead & White were summoned from New York to design an addition with special soundproof bedroom for Pulitzer.   And what an addition it was---connected to the main house by a new wing, it was a huge stone tower, forty feet square, four stories high.  At basement level, there was an indoor pool, ocean fed and steam heated.  On the main floor, there was a dining room, and a huge paneled library. 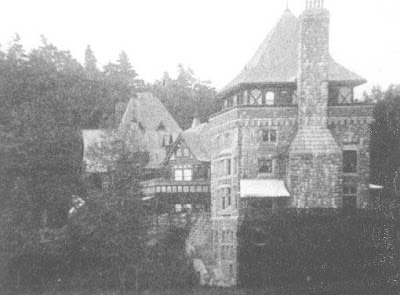 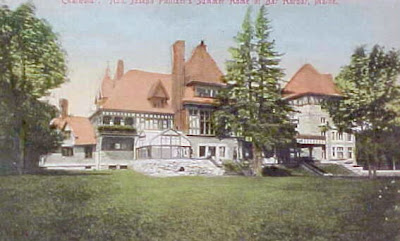 Two views of the ocean front, showing Tower of Silence
Above on the next two floors were offices and bedrooms for Pulitzer's secretaries (who were said to dread their working summers with their driven employer).  At the top of the tower was Pulitzer's bedroom---with a floor on ball bearings, double glazed windows, and walls insulated with steel wool.  The completed structure was dubbed the 'Tower of Silence' by family and staff.  A new stable, with stalls for 26 horses and extensive servant's quarters was built, along with enlarged greenhouses to keep the house in fresh flowers and fruits.

Entrance front, American Architect & Building News, 1883
Entrance Front after additions of Tower of Silence (left), and new service wings (right)
Despite his paper's editorial stance on wealth, Pulitzer himself had no trouble adapting to the luxurious life at Bar Harbor.  Summers passed, with yachting parties, tutors and dances for the children, daily horseback rides with his secretaries, and yet another enlargement of Chatwold.  Andrews, Jaques & Rantoul, a Boston firm with a large Bar Harbor practice (Herbert Jaques had a summer house just down the road at Schooner Head) were summoned, and the servant's wing  was nearly tripled in size, and yet another stone tower added.  A critic at the time said the whole had come to resemble a Norman village.  With over 50 rooms, Chatwold was now one of the largest houses in a town of very large houses.
In the summer of 1902, seized with a new idea, Pulitzer summoned his secretaries, and in the library at Chatwold dictated an outline of this idea---for a school of journalism at Columbia University, which would also administer a prize for journalistic excellence, which eventually became the Pulitzer Prize.
Pulitzer died aboard his yacht en route to his winter home on Jekyll Island, Georgia in 1911. The next year, the new Columbia School of Journalism was opened, and in 1917, the first Pulitzer prizes were awarded. 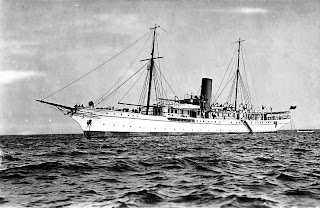 Pulitzer's yacht, the Liberty
By 1925, Mrs. Pulitzer found the responsibility of maintaining the estate too burdensome, and retired to her chateau at Deauville, leasing the cottage to her son, Joseph Pulitzer II, for $2,500.  Two years later, upon her death, he assumed ownership of the estate.  Guy Lowell, architect of the Museum of Fine Arts in Boston, was brought in to make updates and alterations to the house.  Life continued on much as before until the stock market crash of 1929.  The  John Singer Sargent portrait of Kate Davis Pulitzer was still shipped to Bar Harbor each summer to hang in the dining room, which had acquired new murals of the Bay of Naples.  A chauffeur still drove the sleek gray 'country' Packard.  But, though still a wealthy man, Pulitzer felt the pinch and tried to economize where he might.  Among his cost cutting measures was reducing Gardenia operations in the greenhouse---no longer would each breakfast tray have a fresh gardenia every morning, only those of Mrs. Pulitzer and special guests---"the children won't really miss them".   Nevertheless, hothouse melons were still grown for the table, and a Swiss chef, several gardeners, a butler and a bevy of maids continued to be employed, at reduced wages, and somehow the family muddled through. 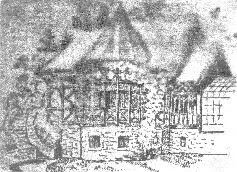 The music room, attached to the greenhouses.
The end was near, however.  Chatwold wasn't opened in the summer of 1932, and in 1936, the Tower of Silence was taken down.  In 1938, the Pulitzers rented a smaller cottage nearby, although they found the net saving was only $2,000.  Chatwold was placed on the market for $225,000, but with the effects of the depression still being felt, and war on the horizon, there were no takers.   A lavish wedding for daughter Kate  in 1941 was the last big party at Chatwold, with several hundred guests dancing to an orchestra on the terrace.  In 1945,  after writing a friend that "the day of the summer palace is over", Joseph Pulitzer II had Chatwold,  the greenhouses, and all outbuildings except the huge garage demolished.  He had planned to build a new house on the site, but instead purchased a relatively smaller cottage, Beachcroft, closer to town, and remodeled it, incorporating salvage from Chatwold.  Other choice bits--mantels, doors, paneling and art, were stored in the garage for future use .  In 1947, a forest fire swept Bar Harbor, destroying the garage and the stored fragments of Chatwold, and were it still standing, Chatwold itself would also have gone up in flames.  The day of the summer palace was indeed over.

For a tale of the servant problem at Chatwold, read a story by the Dilettante in New York Social Diary by clicking HERE
Posted by The Down East Dilettante at 1:50 AM

What a fascinating story. The house reminds me a bit of Cragside in Northumberland, like Chatwold built by a late Victorian plutocrat, and in a similar 'palatial cottage' style.

How sad those days are gone
What a fantastic place.
I'll take the yacht.
Wonderful and interesting post.

What a depressing start to my day, haha. Fascinating story -i wonder if those ball-bearings really worked on the bedroom? I would love to see the cottage with grand remains from Chatwold.Does it still exist or was it destroyed in the fire as well?

Emile de Bruijn. I agree about the Cragside resemblance. There was actually another estate in Bar Harbor, that was directly influenced by Kragside, but interpreted in simple wood & shingles.

Stefan, I'm told that despite the soundproofing, Pulitzer was bothered by the sound of the Foghorn off-shore, and attempted unsuccessfully to have the coast guard silence it. His New York bedroom similarly soundproofed, later became the French drawing room whose decorative history you may remember I detailed a few weeks ago.

Beachcroft, the 'smaller' (only by Chatwold standards) replacement cottage, shingle style with colonial revival details, still stands, owned by descendants. It has a minor place in social history as the site of Brooke Marshall's wedding to Vincent Astor.

What a wonderful article! Thank you for presenting so much of the later history of the house - I learned a lot. I'm also glad you used seldom published images to present the grandeur of Chatwold. The land side view of the house was far more beautiful, but it rarely shown. The graceful wall that lined the water side of the property is still standing. There are now two small cottages on the site, which makes it fun to imagine just how large the original house really was. I definitely recommend taking a boat to see this viewpoint.

What a great post! I honestly had no idea about the history of all that. I was planning to post tomorrow about some of this year's prize winners...so this is perfect timing!

TYTYTYTYTYTY!!!!! as you can imagine, another of my favorite places and thanx for all the different views of it. the view in
"lost bar harbor" is a little limited. of all the places lost, this has to be one of the saddest altho it would have been lost anyway in the fire. where exactly was it? i think i may have wandered around that area on one of my selling trips to bh. i attended an event put on by the audubon society back in the early 70's at COA before they bought the Turrets and got to wander through that pre-restored place and so visited many spots since developed.

Beth, thanks so much

Janet, I think your own news story yesterday deserves a Pulitzer

Turner, almost across from Callender House on Old Ocean Drive. The driveway now serves as a small subdivision leading down to a cove where the aforementioned stone seawall now fronts newer houses.

Well, if there were Pulitzers for blogging this would win. I read the list of Pulitzers this year and your article was way more interesting!

Fascinating background on the grandeur & life of the Pulitzers.

The original mansion was perfect, but i have to say after the additions and the Tower of Silence it lost a lot of its character. It sort of just rambles on and takes away from the original. Great blog!

You might enjoy reading "Stanford White's New York" by David Lowe (1992); the Pulitzer story about Chatwold (in brief) is on page 243. Better torn down than burned down, I say. Thank you posting this article.