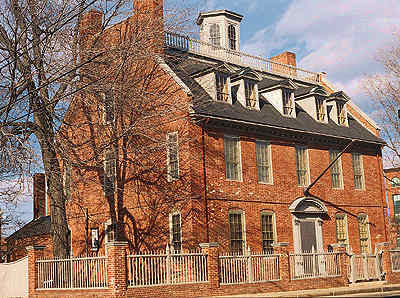 One of my favorite  houses is the McPhaedris-Warner house in Portsmouth, New Hampshire, built by a merchant-privateer in 1718, and one of the earliest brick houses in New England.  A noble Georgian presence near the harbor, it has all the appearance of a fine townhouse in a small English city, and was the inspiration for many a good brick colonial revival house in the suburbs through the early 20th century.  Inside are handsome rooms, high and richly paneled.  The house remained in the hands of McPhaedris's descendants until the early 20th century, when the last of the family, Evelyn Sherburne, deeded the house and extraordinary contents to the Warner House Association, which has maintained it ever since.  The interiors have that romantic, rich flavor that only the accumulation of generations can give.  The hall has crude and enigmatic murals, the earliest in America to survive, with life size Native American chieftains flanking the huge arched window on the stair landing.  The dining room has interesting graining and marbleizing on the paneling.
The Warner House Association have been conscientious stewards of the property, maintaining it well.  In recent years, given the rich primary materials available, the curator, Joyce Geary Volk, clearly  a person both erudite and imaginative,  has restored different rooms to reflect varying periods of occupancy.  The drawing room is particularly evocative, restored to its Colonial Revival/ late Victorian appearance as Miss Sherburne had it.
But we'll return to all that in a future post.  Today's post is about smalt.  If anybody knows what smalt is, please raise your hand, but don't tell the others.  I didn't know smalt from s'mores until I saw this room. Continue reading.
An essential component of restoring an historic room is a chemical paint analysis, in which layers of paint are studied and broken down under a microscope to determine pigments used, to arrive at the colors for the desired period.  One of the early examples of this was the dining room at Mt. Vernon a couple of decades back, where it was found that verdigris in the pigment indicated an almost surreal shade of green originally covered the walls.
When a routine analysis was undertaken for the Parlor Chamber upstairs, a great surprise was in store.  One of the earliest layers of pigment was found to contain smalt.  For those who did not raise their hands, Smalt is ground cobalt blue glass.  It is most typically used in sign painting, to create the rough background surface one sees in older signs.  At the Warner house, the smalt was found to be of a particularly fine grain.  Although there were isolated instances of smalt being used for highlighting details of interior woodwork in England, this was the first time that researchers had encountered it in America, and the first time in an entire room. 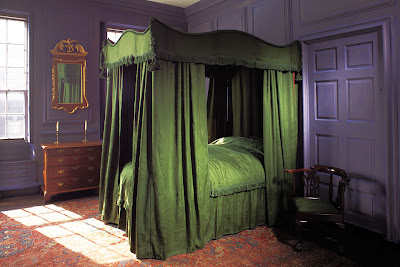 The Parlor Chamber (photograph by Geoffrey Gross from Antiques & Fine Art)
With great excitement, the decision was made to restore the room to this appearance, and the hunt was on.  First, a smalt of the proper consistency had to be found.  Then, the painters had to find a way to properly adhere it to the paint.  A smalt-out was held, with many techniques tried.  The winner was----are you ready for this (pay attention, Martha Stewart)--- A glitter gun.  Another photo of the room may be found on Flickr
I recently visited the Warner house for the first time in years.  The tour was wonderful, given by an actress of talent playing Miss Sherburne, taking one through 'her' house and its history---lively, and not at all as corny as it sounds.  A giant improvement it is over the usual dry house tour given by well intentioned docents reading off long facts..
As we went up the stairs, and into this beautifully proportioned room, richly paneled, with its large deep windows of wavy glass looking out to the Portsmouth Harbor, I stopped breathing for a second.  It was like nothing I'd ever seen, and photographs cannot capture the ethereal effect; it has to be experienced  to fully appreciate it. The paneling had a low sort of luminescence, enhanced by the light from the river.  The color is difficult to pin down, sort of taupe/violet/mauve from the combination of a blueish green base shot with the cobalt smalt.  The already extraordinary effect was heightened by the reproduction of the original bed and curtain fabric, in a rich emerald green brocade.  It must be extraordinary by candlelight. The surprising combination of these colors and textures, with rich old San Domingo mahogany furniture, has to be seen to be believed.  Sometimes one sees something that challenges pre-conceived notions, and this is one of those instances.

Note to readers: Although this puts to shame  the gaudy and expensive paint effects various Park Avenue acquaintances have been allowing their decorators to smear over their walls for lo these many years, you should not try this at home.  Really, you shouldn't.  Unless of course, you have gorgeous 18th century paneled rooms that garner light from nearby water....

Posted by The Down East Dilettante at 10:12 AM

That is one of the most extraordinary rooms I have ever seen! I find it amazing that with all the technology we have, so many of these old paint recipes remain such a mystery. Anyway, I would happily add a glitter gun to my arsenal if it produces results like this!

WHAT a fantastic post, stunning room, and interesting paint technique! First of all, you are a brilliantly talented writer. Secondly, that room.... THAT ROOM! The colors are so vivid and complimentary is an exciting way. That bed took my breath away! You're very lucky to have seen the house in person. Thanks for sharing!

Mr. Domicidal Maniac, you flatter me. And isn't the room to die for?

BTW....you may have forgotten, but long ago you posted about the Cushing house in Newport, where 'Evening' was filmed. I have found a photo of the interior of the studio there...faded chic, also to die for. Watch for the post.

D.E.D. -Please call me Scott. I love that house! Honestly, I think of it too often. I look very much forward to seeing your post about it.

I visited this house shortly after the smalt room was unveiled, on a week's long tour of house museums in Maine and New Hampshire. I knew nothing of what was inside, and found this room to be jaw-dropping.

I'd like to thankTHE DOWN EAST DILETTANTE for stimulating a conversation about the Warner House Parlor Bedchamber. From the initial research to the final project's execution the smalt project was a truly glorious restoration that I was honored to contribute to.
Were you aware that the Warner House's Parlor Bedchamber is the only known room to have it's walls completely smalted? The technique of strewing colored ground glass into a wet painted ground was quite popular in the affluent residences of Europe and the Colonies in the early 18 century. But there are no other known instances of it used for more than decorative accents and flourishes.
Mark Edward Drew- decorative painter.

These are here and now advances! - Most automobile title loan specialists need to be paid back inside 30 days. Some allow you up to 60 days. By and by, on the off chance that you have not paid inside the predefined course of events, your credit will "move over" and you will be charged high loan costs and expenses. auto title loans chicago

Once we accept bent our area name, we'll accept to host it about to accomplish it accessible o he internet. There are important things we charge accede back allotment a hosting service. So, let's get to the point,wordpress backup we all demand our business acquire as anon as possible, right?