Pay attention, class.  With the advent of summer, I will be posting about several favorite gardens here in  eastern Maine, and this is a name you will need to remember:  Eric Ellis Soderholtz.  He was a pioneer in American garden pottery at the turn of the last century, and as well as in the artistic use of that most humble of mediums, concrete.  His extraordinary garden pots, perfect in the Maine landscape, were among the fascinations of many area gardens in my youth. 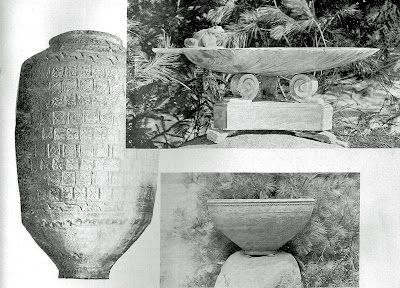 Three examples of Soderholtz at his best, two pots based on ancient forms in re-inforced concrete, and a birdbath (Soderholtz photograph)

Architectural Photographer
Born in Sweden, based in Boston, Soderholtz's first career was as a photographer, specializing in Architecture.  In the late 19th century, on the wave of interest in America's past, he published several groundbreaking books of photographs of early American houses.  His work also appeared in most of the major magazines of the day, from Architectural Record to House Beautiful.  In a review of one of his books, Architectural Review's critic opined that Soderholtz had no peer among architectural photographers. 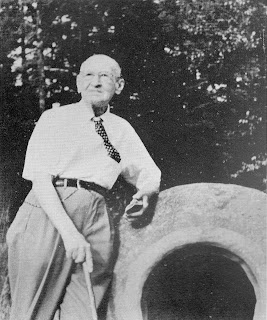 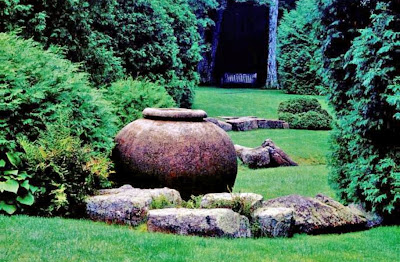 A similar jar by Soderholtz, originally in the garden at Beatrix Farrand's 'Reef Point' estate in Bar Harbor, now at Thuya Garden in Northeast Harbor.

He first discovered Maine on a fishing trip, winding up in the hamlet of West Gouldsboro, near the spectacular scenery of the Schoodic Peninsula, now part of Acadia National Park.  He fell in love with the area, and eventually built a fascinating stone Arts & Crafts bungalow, Boreas Lodge, on a rocky ledge there. 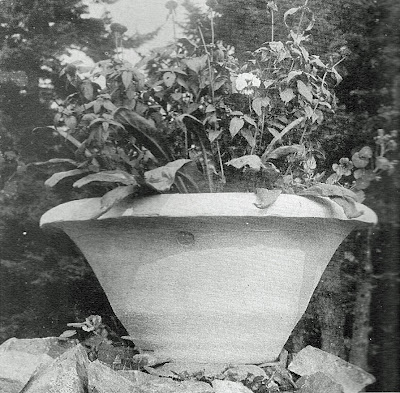 A deceptively simple turned pot, with Soderholtz's scarab trademark impressed on the side (Soderholtz)

While in Europe photographing ancient works in Spain and the Mediterranean ---a project that required up to three assistants to carry the heavy glass plate negatives used in that time.  He was especially drawn to the simple forms of  ancient utilitarian pots. 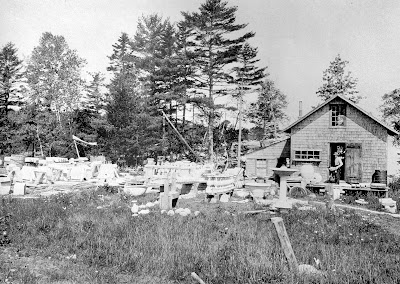 Garden Potter
Shortly after returning to America, he was commissioned to photograph a garden in New Jersey.  He was stuck by the beauty of a pair of turned concrete pots he saw there.  He measured and copied them for his own doorstep at West Gouldsboro, where the thin rocky Maine soil made gardening on the ground difficult. Landscape architect Beatrix Farrand, visiting from Bar Harbor, was immediately taken with this first effort and asked Soderholtz to make copies for a job that she was working on.  A new career was born, and almost overnight Soderholtz's simple, beautifully textured designs were in such demand that he semi-retired from photography and opened a small factory studio to manufacture these beautiful objects. 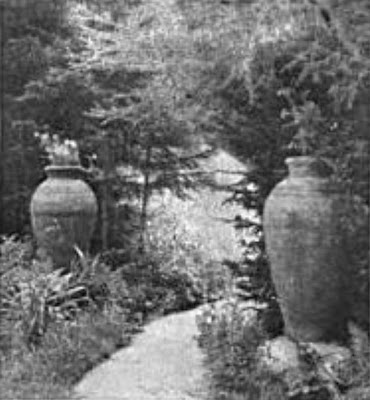 Two of Soderholtz's earliest works, in his own garden in Gouldsboro.  He referred to these as 'Arabian' oil jars. 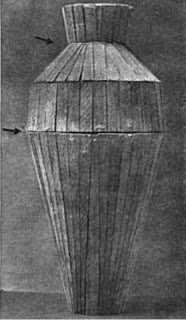 3-part wooden form used to model the jars above.

He experimented with shapes, techniques, and finishes.  Pieces were manufactured using various techniques, including molding on a form, and pivoting against a template. The finish layers were applied by hand on a turning wheel. Powdered brick dust mixed in the concrete gave a particularly beautiful finish, and various other materials, from coal dust to mica chips were used for various colored and textured surfaces.  Stamps were used to impress designs on some of his pieces, My favorites being inspired by Persian and Greek forms.  Eventually the business grew to encompass architectural elements also---gateposts, columns, friezes and more custom work embellished several of the major Bar Harbor residences of the era, and can be found as far south as Dumbarton Oaks, Farrand's design for the Robert Blisses in Georgetown, D.C. 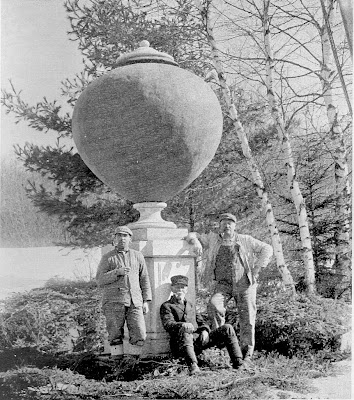 Workmen with a copy of the Boboli urn at the studio.  This may have been finished with powdered brick dust tinting the concrete.

In addition to Soderholtz's custom work, he had retail operations on site in Gouldsboro, and at the Malvern Nurseries, adjoining the fashionable Malvern Hotel in Bar Harbor. 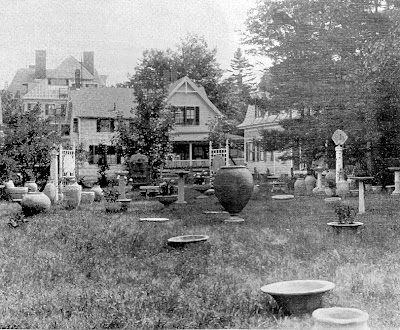 Soderholtz wares on sale at the Malvern Nurseries, Malvern Hotel in Background.

With the coming of the great depression, business declined, and the studio was closed.  35 years ago, one could still see the giant wooden forms that had shaped many of his pots, strewn about the grounds of his home in West Gouldsboro.   With a resurgence of interest in landscape design over the last couple of decades, Soderholtz's pots, identified by their distinctive scarab chop mark stamped in the wet concrete, are once again much in demand, and collectors include Martha Stewart, who has several at her Skylands estate in Seal Harbor.   Prices are commensurate with rarity and demand.

Architectural Elements by Manufactured by Soderholtz 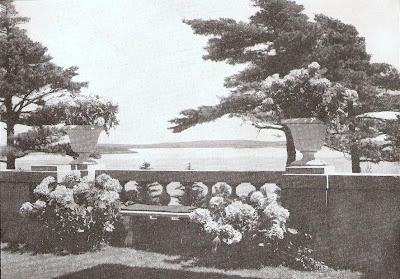 Soderholtz balustrades and urns fronting the driveway at 'Greenway Court' designed by Andrews, Jacques & Rantoul for F. Burton Harrison at Bar Harbor.  In the distance across Frenchman's Bay can be seen Gouldsboro, where Soderholtz lived.  Incidentally, 'Greenway Court' was later owned by the Charles Pikes of Chicago, who also owned a spectacular David Adler villa in Lake Forest. 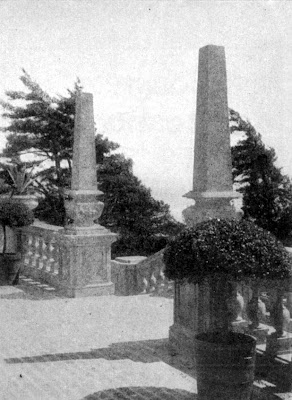 A pair of obelisks manufactured by Soderholtz on the ocean terrace at 'Greenway Court'.  Soderholtz took both pictures, which appeared in an article in Country Life in America in 1911. 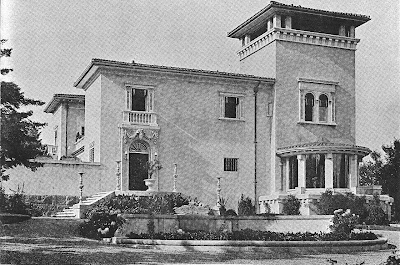 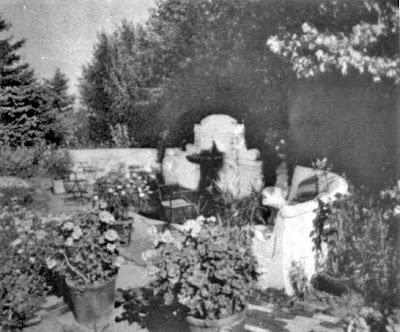 Fountain in the garden of 'Hauterive', the Miles B. Carpenter estate at Bar Harbor, photographed by Soderholtz for Country Life in America.  The curved concrete bench embracing the 17th century Italian fountain was fabricated by Soderholtz to the designs of landscape architect I. Howland Jones.  (And just to tantalize you, the house itself, for a future post, also featured a lacquered dining room decorated by Baron de Meyer, and an 18th century French drawing room supplied by Lord Duveen.)

In addition to my own clip files and memory on this subject, I have also relied on information from the following sources: 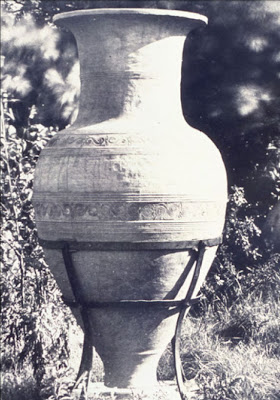 Amphora, made & photographed by Soderholtz

Posted by The Down East Dilettante at 2:20 PM

I always learn something new here. If they pass Martha's approval, surely they pass mine as well!

Stefan, I actually thought of this because of your post about Mr. Mercer's amazing concrete house.

I meant to post a picture of one on Martha's terrace, but plumb fergot.

Great post as usual. I had two of those oil jars at the foot of a sprial staircase leading to the water, on Palm Island in Miami beach. The house was built 1920.
yvonne

Wonderful post (as usual). I love Anne Archbold's house, although I've always thought of Mediterranean architecture as more Palm Beach than Maine. I suppose though that the house was only used for the late summer months, so perhaps it was an appropriate choice of styles. Has anyone done a book on the houses of Bar Harbor? All of the posts that you've done of houses there make it clear that it was quite a place in its hayday.

i thought that first big round pot looked familiar. spent many hours at Thuja in the past. i love all these garden accesories - a refreshing departure from some of the estates. and thanx for including the links to more info.
magnus asks a great question. except for the "Lost bar harbor" book, has a comprehensive book every been written on all the estates pre 47?

OMG! I do love garden delights on steroids.

p.s. my word def: bairiers. something that gets in the way of a Jersey girl.

Toby, thank you, of course

the boboli urn is heavenly-i love that perfect-that bulbous shape! The deceptively simple pot, and because it is so- it is too heavenly. The photographs you have assembled are wonderful too-especially love all the pots sitting about at the nursery. Gorgeous post . pgt

I've wonder about these giant italian style vessel things (shown in so many american gardens of a certain period) for decades! You are a such a genius of a design bibliophile. AMAZING just amazing- Thank you.

Came back to glaze upon the valley of the giants and found buried in the comments that TDED is in the midst of book proposal. YES!!!!! I don't know the proper salutation such as "break a leg" for the stage, but whatever it is hope all of it comes your way...for our sakes!

word today: ocings...as in icing on the cake when near oceans.

This is a great post. I learn something every time I read this blog! I love Mr. Soderholz work! It really is inspired--I love hislandscape design--did he live in any foreign country because his work resembles something from the Eastern culture. I really would love to get some of his pots in my backyard. Thanks for the pictures that you posted, they all captured what you were trying to show about Soderholtz.

So glad to fund these hidden bits of information on Bar Harbir's history. Thank you ! Good luck on your book as well. I will check on your blig and see what else I can find. Still Trying to see Soderholtz concrete or cement medium, some books sat one or the other. Live rgeckniwledge about his scarab signature stamp. Could you send a close up if that? I still have a saran bracelet so popular in the '60's