I snapped these pictures of a graceful early 19th century house with my phone camera on a rainy day last year.   I know nothing about it, but have admired it for years.  It sits across the Route 2  from the Deerfield River in Charlemont, Massachusetts.  This is Asher Benjamin territory, near his hometown of Greenfield, and as all over New England, many houses in the region bear his mark. 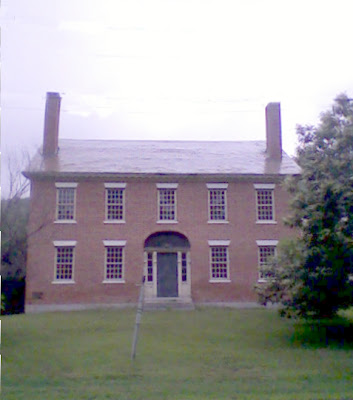 Nothing more than is needed:  Good proportions, spare planes, and few, but beautifully wrought details.
In recent years, Charlemont Academy has sprung up in its grounds, and as the Academy has grown, the beautiful house has grown ever more ghostly, apparently unused and unloved, its maintenance not the highest priority.  It's condition is so  unsullied by attempts at prettifying, or the modern curse of plastic shutters and replacement windows, that I can't but but admire its purity.   On this visit, I noticed that there were broken panes in the arched windows in the gables, never a good sign. 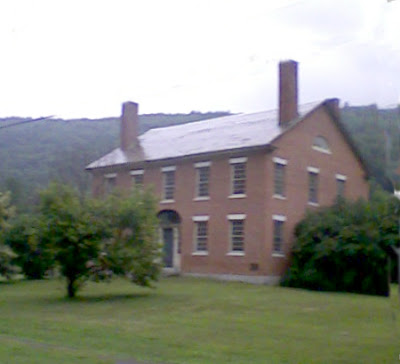 Less is more.  Sometimes these houses look best with minimal plantings, allowing the house to speak for itself.
It's hard to absorb.   I grew up admiring these pre-industrial age houses, graceful and spare, often built by untrained carpenter architects using nothing more than their good eyes and handbooks like Asher Benjamin's American Builder's Companion to create these buildings. They are potent symbols of the country whose birth and early years paralleled their own.   Almost since they were new, they've been admired and coveted, and suddenly, a decade ago, tastes changed, what people want changed (thank-you, HGTV, for all the destruction you've wrought), and  across New England, one increasingly sees forlorn examples---too old, too big, too small, too close to the road, no great room----the reasons are many, but what I do know is that they are disappearing, or being tamed into McMansion-Easy-Maintenance submission, and we are poorer for it.
Posted by The Down East Dilettante at 1:57 PM

I live in a similar house, minus the Palladian arch. The locals didn't want to buy it(although they could have) because they spent years feeling poor in cold drafty rooms as children, ogling something NEW and BETTER. The grass is always greener I guess. So I'm slowly trying to patch the thing back together, and enjoying the sunny rooms, endless space and good proportions, and the thoughts of stories that all the old quirky details bring. What's funny is that the locals all want me to fix the house up, often helping out in surprising ways, or giving me old photos of it that have sat around a hundred years. There is a wistfulness about the way they feel about these houses. Its too bad that our pop culture can't evolve to make these places the objects of desire for many, instead of a few quirky nuts like me.

It's exactly the house that I've been dreaming of since I was a kid. All I've ever wanted, and hope to someday have. It's sad that something as classic and timeless as this should remain unloved for what it is.

Thank you for this post. It expresses exactly how I have felt for years.

No foundations plantings are perfect for this house.

Down the street from where I live there is a very good Colonial Revival house that was perfectly sited where one road met another and it (because of a deed of sale could not be torn down) was shunted to one side to make room for a driveway to the most hideous block of flats to be built - a totally unsuitable yellow fake stucco monstrosity topped by laughable belvederes. I hate to see it but here the house sits, increasingly forlorn and decrepit.

Lovely house, so much nicer than the Holmes House, which seemed to me an exception to the rule that
provincial versions of sophisticated buildings can be charming. Those spindly columns, that awkward balustrade...!!

Yes, I also grew up in the 'country' and have also witnessed the changes which have infiltrated even the rural farm/estate areas of NY.

Wonderful 18th & 19th Century homes are being cast aside in favor of newly built ones which suggest the benefit of low maintenance and modern convenience.

One positive effort I am seeing however, is the conversion of the largest of farm estates to upscale apartments - utilizing the original floor plan as closely as possible, with the hope that it may be returned to its original configuration in the future.

Given that few have a use for large scale estates these days, thoughtful re-use is helping to preserve these properties. For the time being it seems an option in giving them a life, as opposed to watching them whither.

I hope that once the McMansion's start to have thier own maintenance issues, people will again consider the inherent beauty and value of older homes.

And yes... if we could somehow stop being so new product-driven, we possibly wouldn't be romanticizing the concept as much. It's such a difficult thing to acknowledge that what we are doing to ourselves has become so non-sustainable and inauthentic in the long run.

Back a lifetime ago, I lusted after the Enos Collins estate - Gorsebrook - in south end Halifax Nova Scotia. It was a georgian mansion with attached dependencies (and at that time still had extensive acreage and stunning stone walls and iron gates) built in the early 19th c by a banking and merchant impresario who got his start by privateering. Unfortunately, it too was owned by an educational establishment - this time St.Mary's University who let it run down and finally destroyed it as being useless to them. Perhaps a secular university might have made it their president's residence - perhaps not. Sadly all that remains are the measured drawings but at least we have those.