MEMORIAL DAY AROUND THE VILLAGE

This post is a week late---I got distracted by architectural frivolity and Edith Wharton, and forgot I had these pictures.
Of course I spend many days of my life running errands, going to meetings and parties, passing through our village.  But it is on Memorial Day that I slow down for a few minutes, literally smell the flowers, and stop and think about where I live.  It takes an even harder heart than mine not to be moved by this day of remembrance, solemn and sweet, played out against the reluctant, delicate, spring. 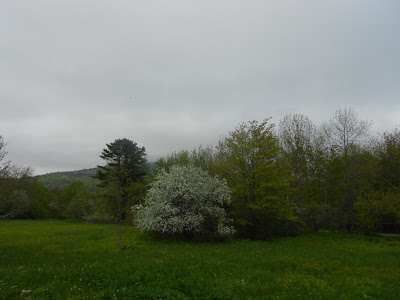 The weather this year has been----how do I say this gracefully----perfectly, absolutely,  shitty---cold and rainy 24/7, a slight improvement over the winter, which was grey or snowy 24/7.  Above is an old untended crab apple at the edge of my field,  the mountain behind obscured by cold fog.  It was a perfect cloud of blossom the day before, disregarding all rules about wearing white before Memorial Day.  Memorial Day came off hot and hazy, and by evening, the blossoms were gone.  Life is short.
I wandered down the street to the parade.  Around the corner, at the school, the band---a very good band---was warming up, not yet in formation. 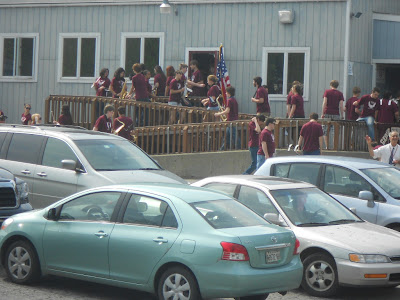 And everywhere, in yards, hanging over fences, were lilacs and apple blossoms.  The short week or two that lilacs are in bloom in New England are justification enough for the unbearable winters, and hot humid summers that we endure to enjoy another season of bloom.  Almost. 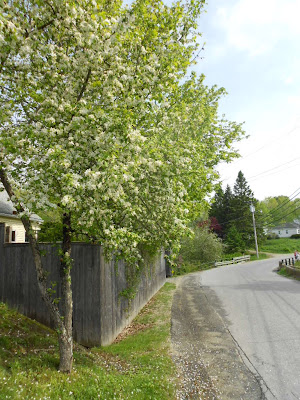 A mill stream meanders through the village, emptying into the harbor from a small fire dam in the village.  The small gristmills and sawmills, and even an early 19th century cotton carding mill that flanked it are all long gone, leaving a few traces.  Just upstream from this view is a flat hollowed out ledge, where long before the settlers from Colonial Massachusetts arrived, the Native Americans who were here first ground their corn. 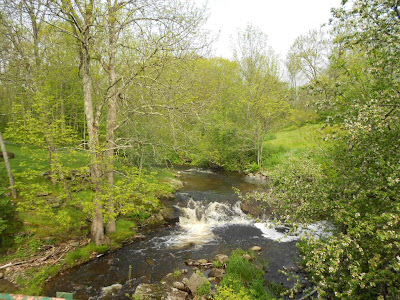 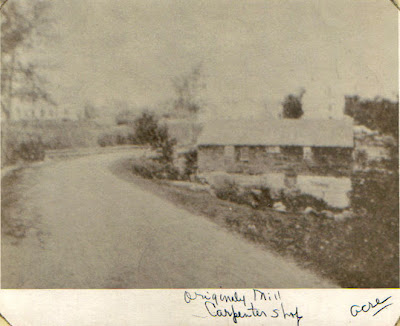 The combination of Memorial Day and spring makes one tend toward reflection, even---don't tell anyone---sentiment.  My family is long settled in this region, and were active in the affairs of the village when I was growing up, and we were related to everyone, but now, half a century later, our relatives are fewer, their houses occupied by people 'from away', the points of the compass have changed, and my father and I are the last of our line in town. 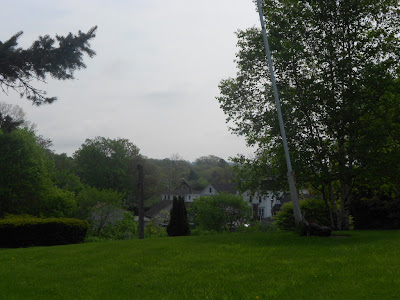 Above was my great-grandmother's lawn, sloping down to the millstream and a view of the harbor and main street.  Her white Victorian house, with its bay windows and faded parlor filled with curiosities, is long since demolished, but I still walk past this spot, 45 years later, and remember the scent of the old fashioned monkey faced pansies freshly planted around the birdbath in the garden, the sugar cookies baked in a wood cook stove, the mints kept in a covered dish on the sideboard.  Her father was a 19th century schooner captain, born around the time of the Mexican war.  His oval framed portrait glared down on one in the parlor.  The past was always just around the corner in my childhood. 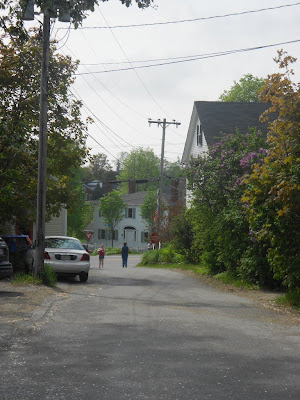 Looking toward Main Street, the crowd gathers for the parade.  A Civil War cannon on the lawn of the Legion Hall was fired, with great noise and even greater smoke, a momentary reminder of the spectacle of war, and the parade was begun. 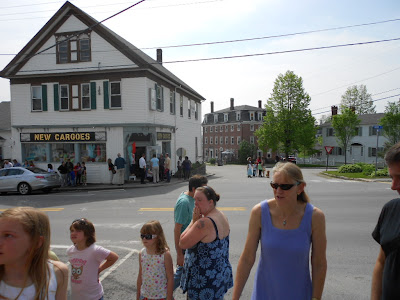 The village square, above, is but a triangle.  Originally, the parade ground was a quarter mile away, at the top of the hill in front of the meeting house.  There mustered the local militia for the War of 1812, when we briefly found ourselves British again. 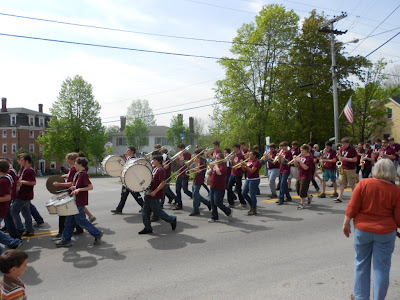 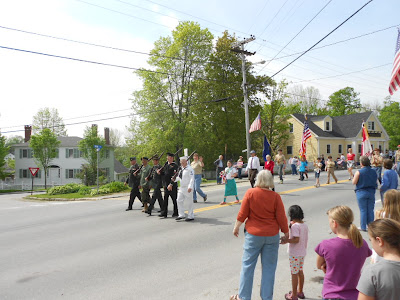 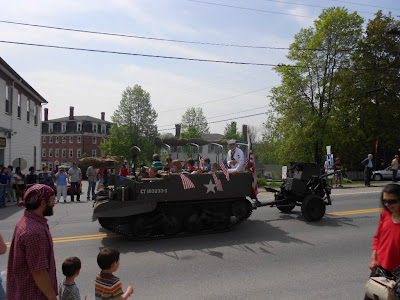 When I first remember this parade, there were still survivors of the Spanish American War.  Someday will someone write that when they first saw the parade there were still survivors of the Iraq war?  I look at my friend holding her granddaughter's hand, and like so many before me, I make the futile wish that by the time she's our age, war has ceased to exist, but of course I know better ( I also marvel at the passage of time:  When did my friends become grandparents???). 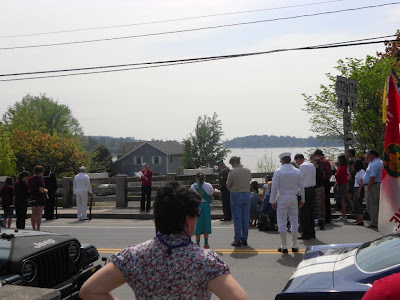 At the bridge where the millstream empties into the harbor, a remembrance is read, a gun salute is fired, a floral wreath thrown into the harbor, and taps is played, followed by the National Anthem.  My neighbor, an extreme conservative, and I, an extreme liberal, are the only ones who remove our caps, to my great surprise.  There is not a dry eye in the house.  For many, it is the remembrance of personal loss, or battles fought.  For others, the sadness and futility of wars past and wars to come.  I'm just glad I was wearing my Wayfarers.  Walking by two hours later, a friend and I note that the wreath has floated out to sea. 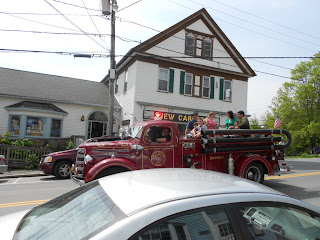 The local fire department loves a parade.  I  remember the thrill of riding in the old Mac pumper as a kid, of going down to the firehouse to look it over with my dad.  It was definitely one of the ten coolest things in town.  Perhaps still is. 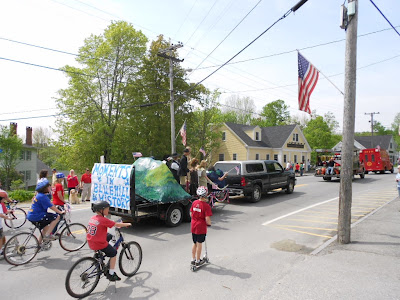 The local historical society decided that it needed a float---the only one---in the parade.  It was sort of cute, a capsule rendition of the town's history.  Following behind, at the end of the parade, the soldiers of tomorrow's wars. "When will they ever learn?" 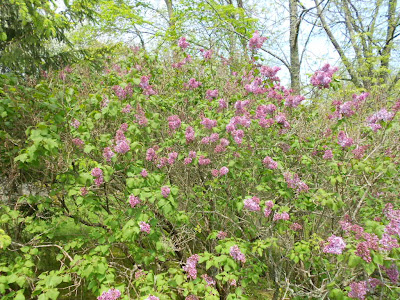 Did I mention lilacs everywhere? 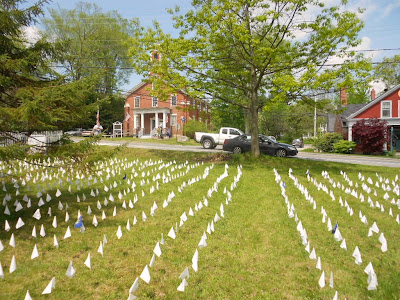 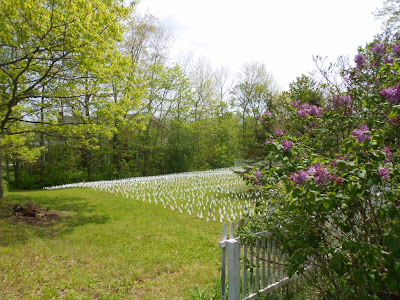 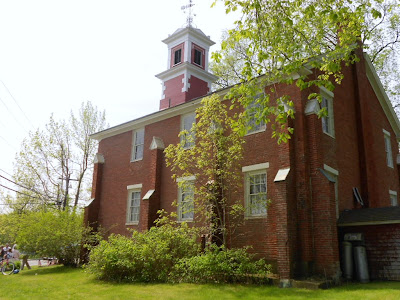 Facing each other across Main Street, two versions of remembrance.  The Legion Hall, in the old Academy building, and a lawn with thousands of white flags, symbolizing those killed in Iraq and Afghanistan.  The blue flags represent soldiers from Maine. After the parade, some gathered on the lawn of the parsonage for bluegrass music
And everywhere through the village, old white houses that have lived through more wars than can be counted. 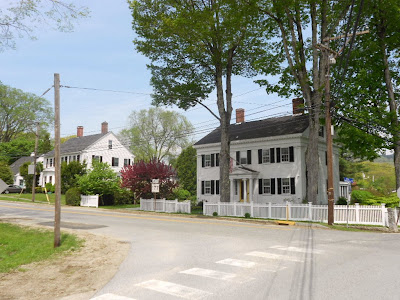 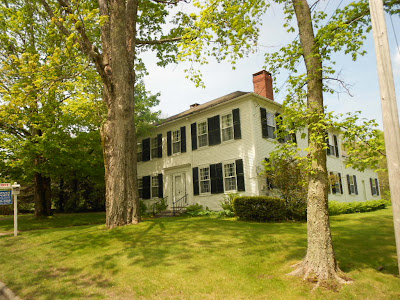 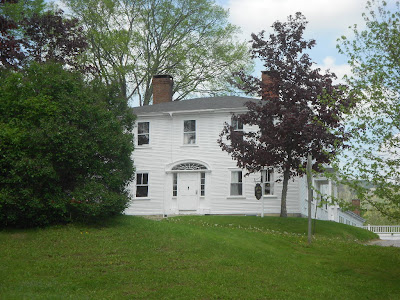 In a moment of personal remembrance, I walked up my grandparent's former driveway, for the first time since they ceased to live there 20 years ago, though I pass it nearly every day.  The magnificent elm tree on the lawn, which barely survived them, is gone, but a couple of the elms that lined the drive are still there, and the forget-me-nots still bloom in the shrubbery 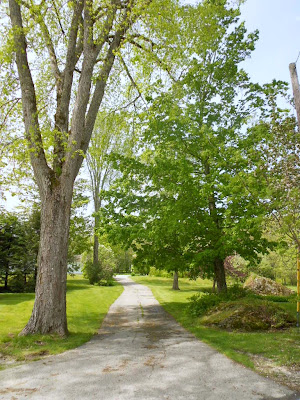 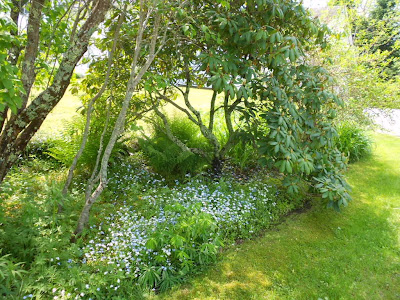 And that's it.  The sweetest, most nostalgic week of the year up here at the eastern edge of the country.  In two or three more weeks, it will be summer, and the world will be on our streets.  Celebrity sightings will be made, real estate and sailing gossip will rule conversation, checkout lines at the grocery will be unbearable, and the snarled traffic on Main St. will remind one of the Hamptons. 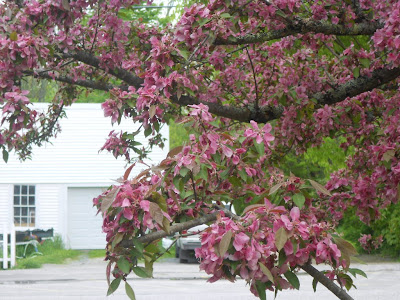 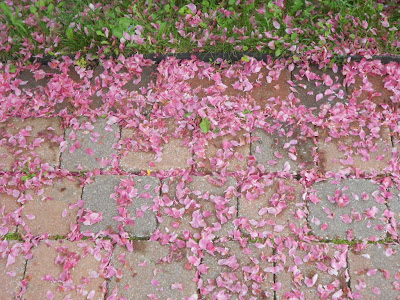 Posted by The Down East Dilettante at 11:51 AM

Someday will someone write that when they first saw the parade there were still survivors of the Iraq war?

As this is the anniversary of D-Day, I'll pass along a fragment from the Greek lyric poet Ibycus (6th C. BC), translated by a young classicist of my acquaintance:

Nor will I recount
The valor of magnificent heroes
Whom the hollow ships bore in their riveted hulls...

...The Muses, whose voices are wiser than mine, might try,
But no mortal alive could tell all their deeds.

Apart from the snow, the tourists, and the bugs, I can't see why any sensible person wouldn't want to live were you live.

(At some future date, I could possibly be induced to tell the story of the worst Maine canoe trip ever.)

now this post makes me miss maine, this is the maine of my birth and my childhood. i love fancy houses beyond belief, but this is the one that gets to me. happy summer. have some chowder for me. :)

This is terribly affecting and a wonderful evocation of village history. Can you explain the reference to the 1812 war when you were briefly British. It was that bit that gladdened my heart!

Things come into view at this age, don't they? You can see around the corner both ways, when we were young we thought time was standing still until the view expanded and we gained periphery [and, in my case, fear!]. This post is a lovely reverie, DED, the poignancy in the way you reflect and write makes me well up each time I read this. And that last frame, oh.

I was in St. Louis on Memorial Day weekend, and wound up tracing the route I always took to my grandparents' modest bungalow on the South Side. I used to visit them on Saturday mornings when I was in my first apartment, and I'd always stop at their favorite bakery on the way down to pick up a stollen. We'd sit and eat it and listen to the '40s music they loved on the radio. On this visit, as I drove up, I could see everything had been changed in the years they've been gone: new roof, new siding, new trim. The house as I knew it was gone. Then, as I got closer, I saw that the front steps, which my grandfather meticulously kept painted red, still had their crimson hue, and I knew my trip had been worth it. Thanks for sharing your memories.

A gentle, wise and loving view of your world and worlds. America defined across time in one village. Glad to see the snow finally melted. With our 95+ days I'm thinking winter was a mirage.

A beautiful post that captures the spirit and essence of our town. You could even entice the unwary tourist to come for black flies! I've been away so long...I even missed the lilacs.

Wish I could see a close-up of that float!

Oh, this makes me homesick. However, we marked the day in another small town, half way across the country. The sentiments were the same, as was the spirit of the people.