This gate is a footnote in landscape history.  Subtle, deceptively simple, it is only as one examines it that one realizes how good it really is.  It is the main entrance to Pointe d'Acadie, the long demolished George Vanderbilt estate at Bar Harbor.  Like all of his family, Vanderbilt was an inveterate builder, and in 1889, even as he was acquring the 146,000 acres of North Carolina that would become the Biltmore estate, he had Frederick Law Olmsted at work landscaping this smaller (by Vanderbilt standards) project at Bar Harbor.  Olmsted's work at Pointe d'Acadie, a prelude to his final great work at Biltmore, would include new roads, carefully composed clearing and tree plantings, a new stone terrace and stairs that would enhance the transition of the large shingled house to the landscape, and the damming of a small cove to be used as a naturalistic swimming pool, Bar Harbor's first, complete with rustic Adirondack style cabanas.  All this even as George Vanderbilt was embarking on the largest private building project of the era at Biltmore.  The site of 'Pointe d'Acadie', which Vanderbilt had purchased for the then large sum of $200,000 (Approximately $7,000,000 in today's dollars) is a spectacular little Peninsula jutting into Frenchman's Bay, views of water and mountains on all sides. 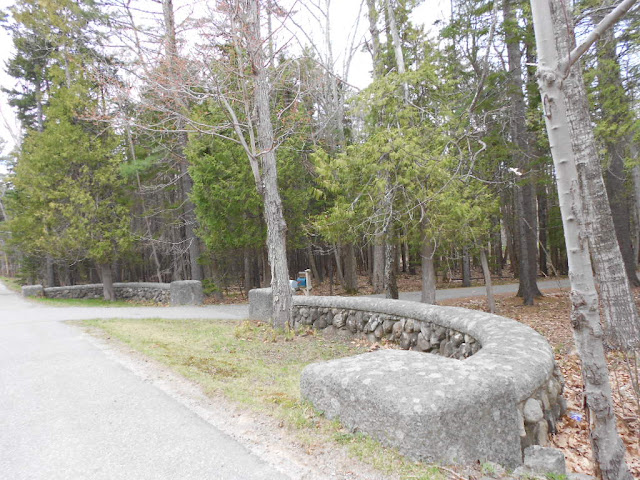 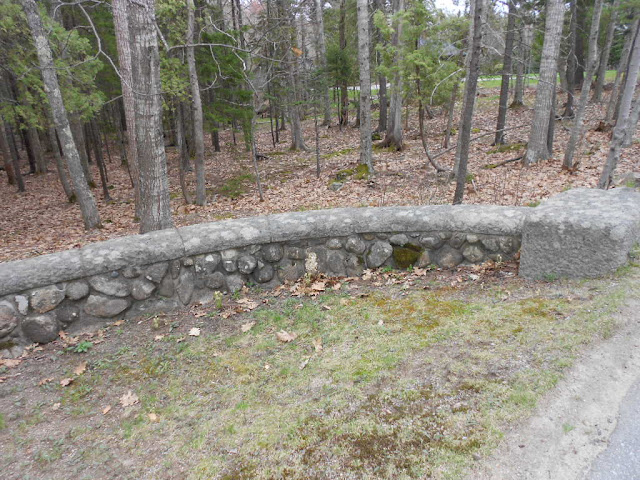 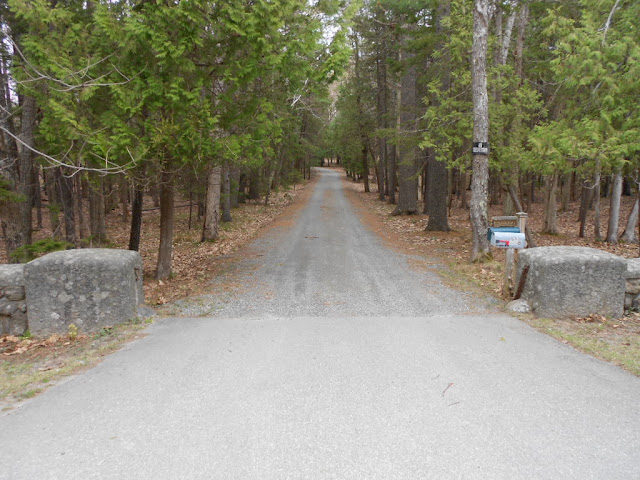 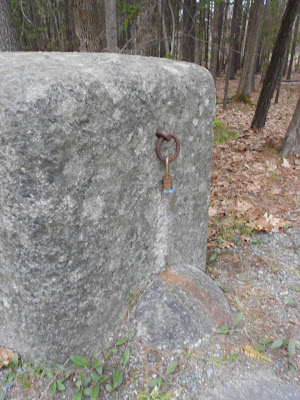 Later highway construction has partially submerged the gate, but it is nevertheless a classic example of Olmsted's approach to designed elements in the landscape, subtle, with materials and shapes carefully considered in relation to the landscape.  The sweep is broad and gentle, the granite coping carefully rounded and shaped.  It is almost in rebuke to the massive Beaux Arts gate of Vanderbilt's  neighbor, railroad tycoon John Stewart Kennedy of Kenarden Lodge (below). 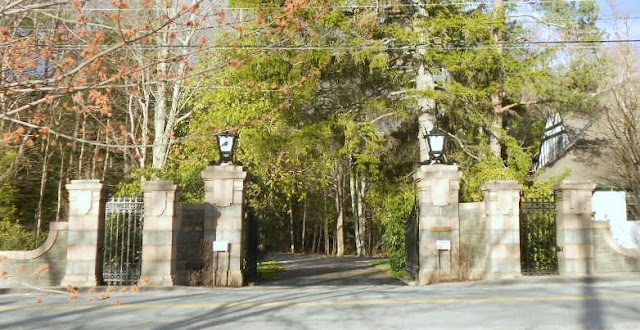 The driveways at Pointe d'Acadie, carefully constructed to Olmsted's exacting specifications, although today not maintained to the manicured, daily raked, standards of the Vanderbilt era, have rarely needed major work since. 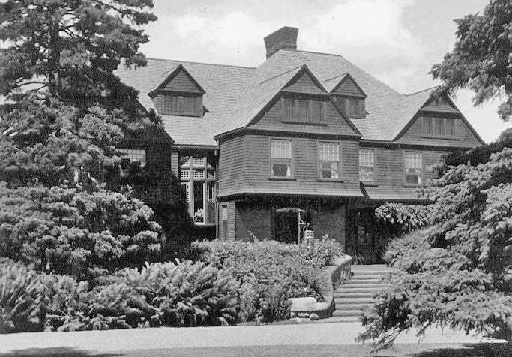 The terraces of Pointe d'Acadie with their broad shallow stairs to the lawns, with stonework and coping matching that of the gate, were similar to other examples by Olmsted, and typify his approach to integrating house and landscape.  The terraces survived for many years after demolition of the house---I regret never having photographed them. 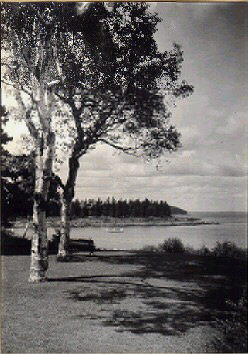 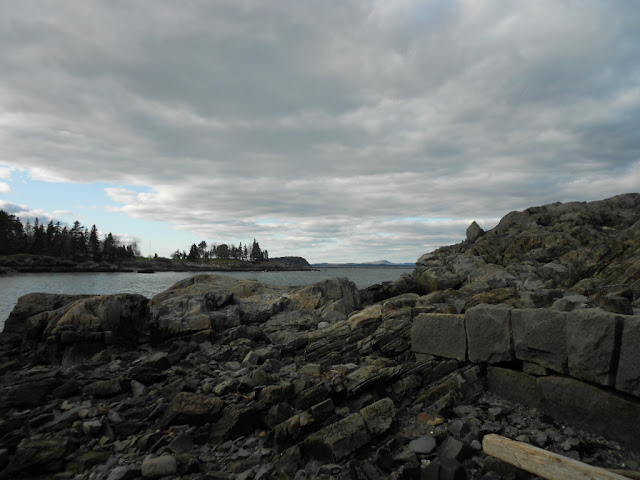 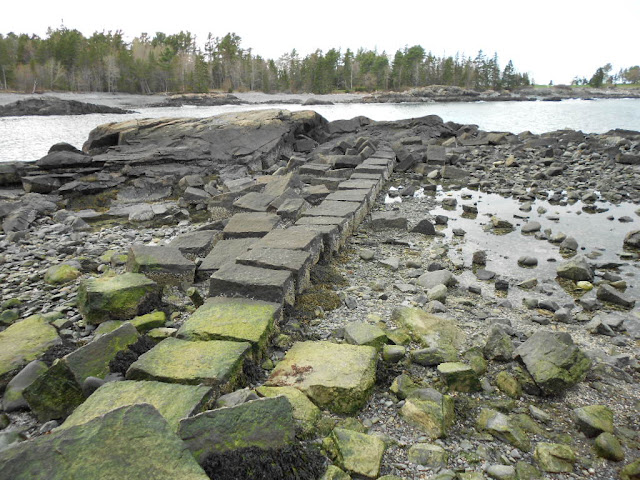 Vanderbilt's naturalistic swimming pool started something of a trend at Bar Harbor, and several other estates featured them.  Above is are early spring views from the ruined cove side pool (nature reclaims her own) at Old Farm, the George Dorr estate, looking across to Pointe d'Acadie.

In recent years a new house was built on the Pointe d'Acadie site, which is private property.  Old Farm is now part of Acadia National Park, which was founded by Dorr.
Posted by The Down East Dilettante at 9:26 AM

The senior Olmstead, in particular, really knew his stuff.

You can do no wrong with Olmstead -but that Beaux arts gate is just beautiful. Thats the nasty architect in me though LOL. I guess it boils down to personal preference.

I always feel smarter after reading a Dilly post.

Vestiges of grandeur for sure. Sort of funny that the gates survived the house.

A very interesting posting. My impression of the two gates is that the Vanderbuilt welcomes and the Kennedy excludes.

Cool, but it's Olmsted

I particularly like the photo of the stone blocks from the pool, with their mysterious indication of what had been there before.

Incidentally, when I was in college I wrote a long paper on Frederick Law Olmsted, and spelled it "Olmstead" throughout. The professor circled in red every single instance of this, and I remember being angry because I had gotten the message after the first couple, and all the red circles obscured the points I was making.

The first time I was ever at Biltmore, and came across that life-size portrait of Olmsted, I thought, "Why is there a picture of the damned gardener? The roofer did much more work!"

Love The Ancient's comment about the roofer doing much more work.

There are two brothers here who have worked hard on an amazing renovation of an 1860s building with one of the country's oldest candy stores on the ground floor. The original shop windows were broken ages ago and the brothers ordered beautiful huge expanses of curved glass that were installed. Everyone oohs and aahs over the glass, and they kindly point out that the really remarkable effort was made by the carpenter who recreated the old molding profiles and the surrounds for what used to be glass block below that let light into the basement level. Huzzah for the carpenter and the roofer!

Every one of those tiles on the Biltmore roof -- and I can no longer remember how many hundreds of thousands there are -- is individually wired/tied to an underlying substructure. And down in the basement somewhere are enough additional tiles, made at the same time, to replace the entire roof.

On one level, this admirable. On another, you can see how Vanderbilt managed to run through all his money, and leave his descendants with the biggest white elephant ever.

Mr Ancient, Biltmore had to buy more slate tiles from the same Penn. company after hurricaine hugo in 1989 and there is a small supply but by no means many in Biltmore hands.

Interesting to know. Thank you.

I learned a very good lesson from this article and that is some learning experience we can not encountered it. For me It is very inspirational.