I first consciously saw these buildings when I was five or six, and my little eyes nearly popped out of my head---veritable fairy tale houses sitting at the edge of the woods in the enchanted landscape of Mt. Desert Island.  Whither Hansel?  Gretel?  Sleeping Beauty, are you there?

Designed in 1930 by Grosvenor Atterbury, they were built by John D. Rockefeller, Jr. as protective entrances against motor cars for his great public/private project, the network of carriage roads that traverse Acadia National Park and the Rockefeller estate in Seal Harbor on Mt. Desert Island.  Rockefeller's vision for the park was one in which the  public could travel and recreate quietly within the wild landscape.  With the gatehouses, beautifully designed and maintained carriage trails and their ornamental bridges, the effect is often less of nature unspoiled than of a very sensitively landscaped country estate amidst spectacular surroundings, and very beautiful it is, regardless.

The two structures, with their unlikely evocation of rural France, one at Brown Mountain in Northeast Harbor, and the other at Jordan Pond in Seal (we'll deal with the Jordan Pond House and its famous popovers another time, class) are far more charming than they have any right to be.  Textures and picturesque details are all at high volume, but in the hands of a master designer like Atterbury, they are always under control, each playing its part in the whole. 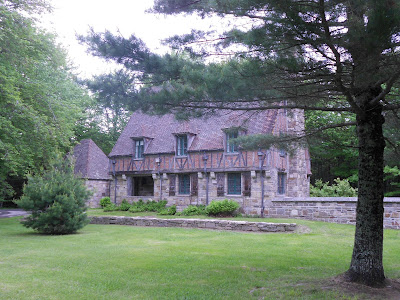 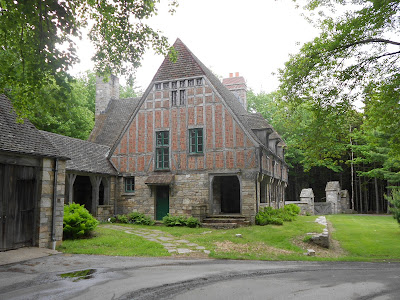 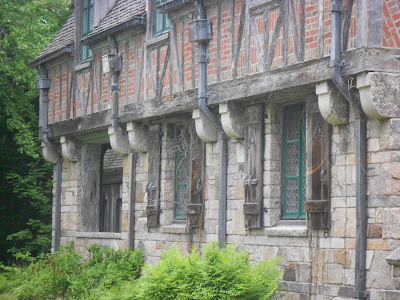 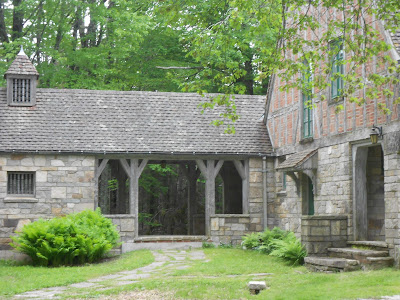 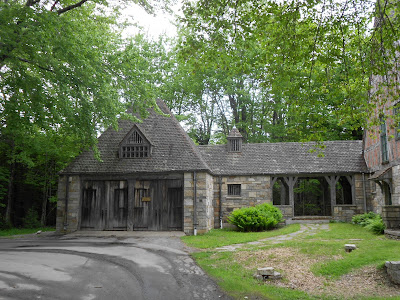 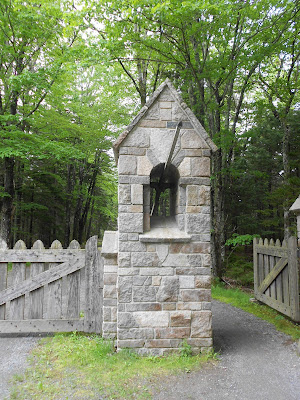 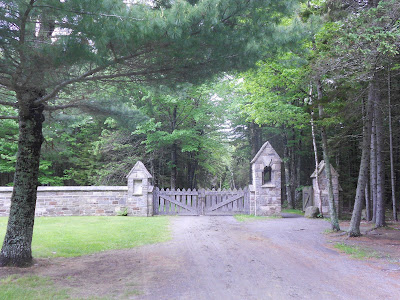 The larger of the two gatehouses is at Brown Mountain.  Long used as housing for park staff, it is no longer in use as an entrance, in favor of a new gate a hundred feet away. 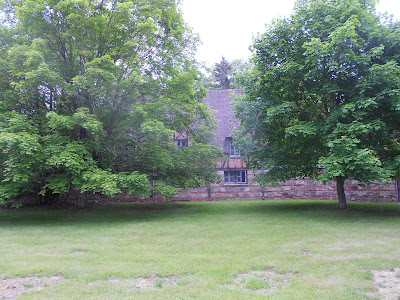 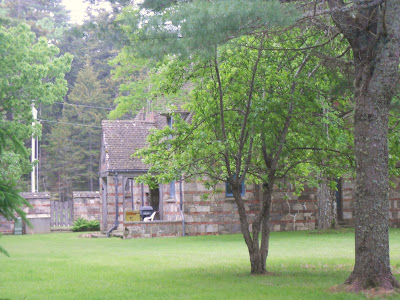 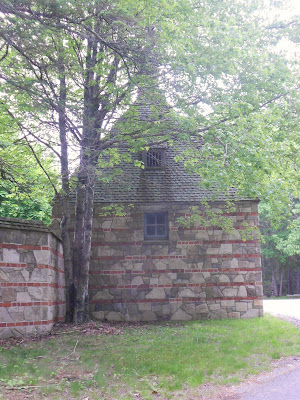 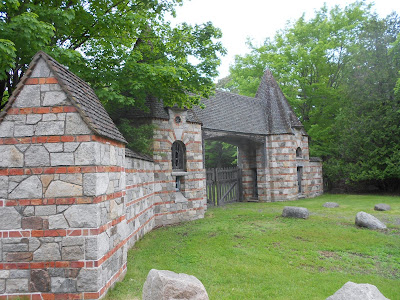 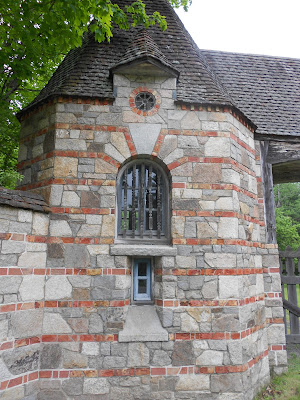 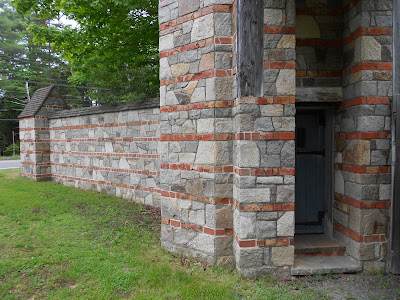 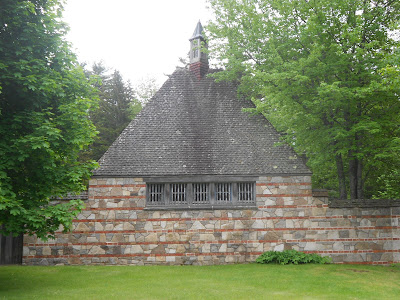 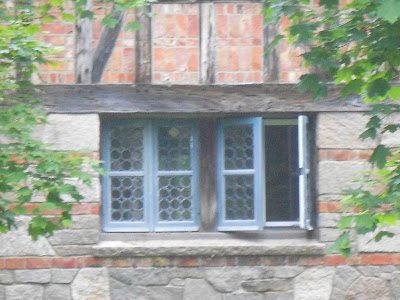 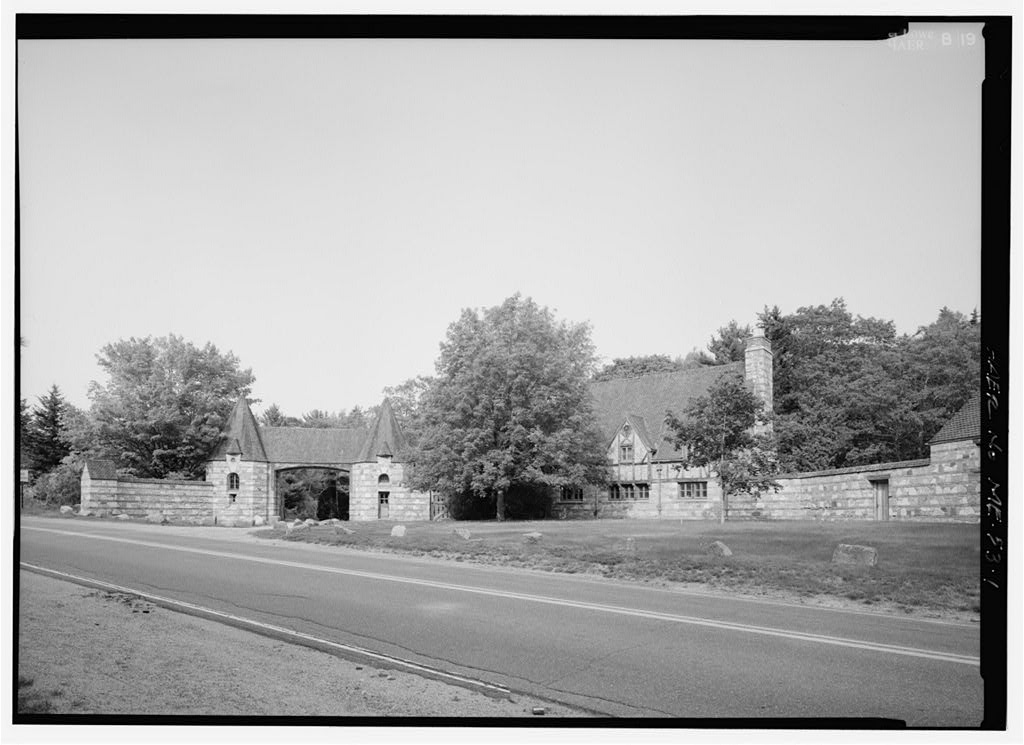 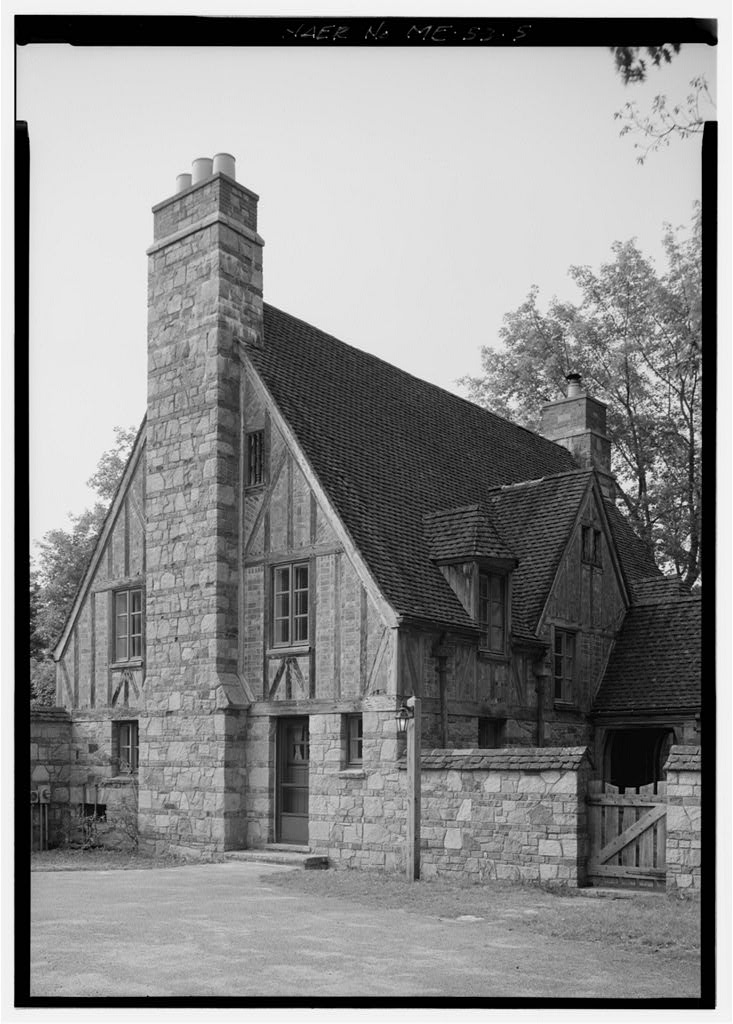 Details count:  Naturally, masonry repairs have been necessary over the years.  Originally, under Atterbury's watchful eye, local craftsmen carefully distressed brick, and used dark mortar.  Repairs have been made with smooth modern brick, and wide white mortar joints.  While obviously the work of a good mason, they stick out like the proverbial sore thumb.  Yeah, I know I'm a grump, but details count. (When I'm King, things will be different. Fake plastic shutters will be first to go).  We so need to give the National Parks more money---or is this one of those sometimes misguided but well intentioned edicts from the Department of the Interior in which new work on historic buildings must be identifiable from the old? 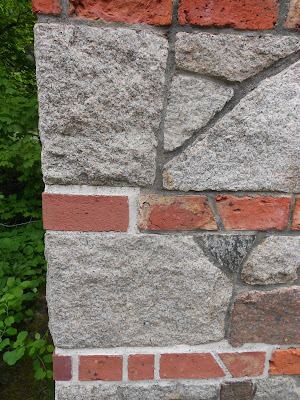 Looking at  the new gate, I am reminded of Vincent Scully's great quote about the new Pennsylvania Station after the demolition of the old one: "We used to enter the city like Gods, now we scurry in like rats".   And so though luckily the Gate House is in no danger of demolition, one still enters more like a racoon.   When these gate houses were built, Frederick Law Olmstead Jr., Beatrix Farrand and others, as well as Atterbury, were involved in the design of public circulation and space and they chose their materials wisely to integrate with the landscape and designed entrance to the beautiful land beyond as an event.  We so need to give the national parks more money. And who designed those Leaning Tower of Acadia trash cans? 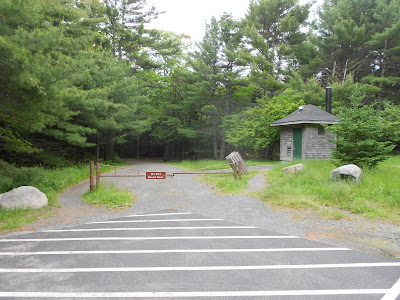 I had originally intended to natter on at length about the history of the Gate Houses (the Dilettante does tend to go on), but while researching facts, I read a piece by Aimee Beal in the National Park Traveler that tells the story so well that anything I write would be tantamount to plagiarism.  For that account, click HERE.

Posted by The Down East Dilettante at 9:46 PM

These gatehouses with their charm and quality remind me of WPA projects taken to the next level--not too surprising given their dates.

I think I prefer the Jordan Pond gate house. The alternating stone and brick courses at the Brown Mountain gate house are unusual and interesting, but I'm not so sure that I like the effect.

Can you enter the gate houses, or are they off-limits? I wonder what they are like inside.
--Road to Parnassus

Fabulous! I love the Bell Post and all the wonderful HABS drawings. The combination of brick and stone is sublime, but the "repairs" inexcusable. I think surely it is the result of a poorly written specification and no supervision. It makes one wonder if the previous condition was not better than the "restoration". Perhaps a deep-pocketed summer resident would sponsor a masonry restoration workshop some day soon, and/or a patron could be found as was done for each of the bridges in New York's Central Park.

How fascinating! Love little public buildings like this where details were lavished as if they were private homes. You're right -they are right out of a Grimm fairytale! While obviously well cared for, one does wish a more sensitive approach was taken to repairs. I have very mixed feelings on whether repairs should blend in or be fairly obvious (as these are) but as they're not architecturally significant, I think blending in would be much more appropriate.

Not that I'd expect otherwise, but the Jordan Pond Gate House couldn't scream Grosvenor Atterbury any more than it does. That isn't a negative whatsoever as I adore the perfect execution and oozing timeless charm.

If you could lift this gate house to Indian Hill (OH) as part of the estate Cobble Court (by Atterbury) they would fit hand and glove perfectly. Clearly he knew what clients liked and could get his contractors to build with consistent precision.

Loved learning more about the gate lodges. I remember the first time I drove by the Jordan pond lodge and wondered about it. They are remarkably handsome buildings and never fail to elicit a long look. I'm hoping that once the renovations at the Atterbury building at SERC are completed, they'll offer tours.

This is marginally off topic, but the following bit from your post jumped off the screen:
" We so need to give the National Parks more money---or is this one of those sometimes misguided but well intentioned edicts from the Department of the Interior in which new work on historic buildings must be identifiable from the old?"
That topic, endlessly debated, could fill many columns. How is that we've got to a stage in preservationist thinking, where repairs or rebuilding "in the manner of" has become suspect, something to be distrusted and for all intents and purposes, outlawed? There's an impressive restoration of a
Frank Lloyd Wright house taking place in these parts,
and I am told that the architect's plans for a sympathetic outbuilding (in fact a garage) have been
seriously challenged for the simple reason that future generations might mistakenly brand that new
structure as "original". Therefore it must be reduced to something blatantly out of key, in order to sustain
the pure Truth, or some such drivel.

Decades ago, I was given a private tour of the necropolis under St Peter's, sometime before it was opened to the public. My guide was a very clever and very dissolute Jesuit who wore impeccable jackets out of Naples. His commentary on the brickwork -- which hinged on the collapse of standards with the decline of slavery and servitude -- was both brilliant and oddly discomforting, under the circumstances.

3) Jordan Pond Gate Lodge seems much better, as if the architect was reaching back in his inventory to pull out something he once did but couldn't quite remember. So we get gestures, quotations, but not really anything new.

2) and 3) above probably comport fairly well with Peter Pennoyer's suggestion that Junior was keeping Atterbury afloat during these years.

I agree!! Hahaha!! These gate houses are amazing! The design is amazing and somehow, it is unique. I've never seen a gate house like this even on movies.

Superb posting for house . amazing this post great your idea