DIRIGO. Back to the center.

The Downeast Dilettante's distinguished panel of editorial advisers have often and repeatedly recommended that he stay away from politics and stick to less incendiary topics, like Elsie deWolfe's refusal to visit Maine if she could possibly avoid it.  Mostly I heed their wisdom, but not today.  I am practically bursting with pride for my state--and my town--- after last night's elections.

Maine's state motto is Dirigo---'I Lead', and  for many years conventional political wisdom was that 'As Maine goes, so goes the nation'.  Let's hope that's true.   After accidentally electing the nation's most embarrassing Governor a couple of years ago we learned our lesson (this is not even a partisan judgment on my part---the guy is embarrassing, and it was an accident, albeit of the train-wreck variety) and this time the Democrats got behind the most electable and moderate choice, Independent Angus King, to take over the admirable Olympia Snowe's Senate seat---by a wide margin.  Maine re-elected President Obama by a 16% margin.  And last, but definitely not least, the simply and clearly worded Ballot Question 1 "Do you want to allow the State of Maine to issue marriage licenses to same-sex couples?" passed by a 5% margin---more than even supporters were expecting, and enough to guarantee that no recounts will be forthcoming.

At the local level here in our village, the statistics are even more impressive:  1760 of the 2206 registered voters turned out---65% for Obama, 55% for King, and a whopping 66% for Gay Marriage.  (The moment I knew that Question One was going to pass was last week.  My 84 year old mother, not by nature a progressive or liberal, asked me if I was going to vote yes.  I answered 'of course', and to my surprise she replied, "So am I.  It's time, and it's respect".  The sheer nastiness of the other side, combined with seeing several nieces and nephews in loving same-sex relationships combined to give her a new perspective).

I live a town that is by and large populated by the well-to-do and well educated.  But this is also Maine, and as the misery unleashed during the Bush years continues, so does rampant poverty.  As I came down the stairs from the voting booths, volunteers of the local food pantry, including the Reverend Betty Stookey (her husband Noel is better known as the Paul of 'Peter, Paul & Mary'), were collecting signatures on a petition to ask the town for financial support for their services.  For the first time, as we go into Winter, the food pantry's needs have outstripped its funding and they are asking for help.  Despite our veneer of affluence, jobs are scarce, skills are limited, and gas and fuel are high, leaving 20% of our population below the safety net.  Another of the volunteers told me how shocked and saddened she was to discover that this was going on just beneath our pretty surface---that she had had no idea before that it was so deep or so widespread.  One cannot help but reflect on the billions wasted on the recent election and feel a bit rueful.

The campaign for Question One was well funded and beautifully run.  It never went off message, and compared to the dishonest and inflammatory rhetoric of the opposition with the usual claptrap about the 'Homosexual Agenda' (they're going to convert our children!!) it was positively uplifting. I received a pre-recorded phone message from the opposition that was actually stunning in its willingness to play to the lowest common denominator    Major donors to the gay marriage campaign included Brad Pitt, and believe me, I'll make a point of seeing his next movie.

Thank-you Maine.  I have hope for the nation again.

PS.  I did not lead in with Elsie deWolfe capriciously---she and her longtime partner, theatrical agent Elisabeth Marbury, were perhaps the original femaie power couple--and despite the fashionable Ms. deWolfe's aversion to the wilds of Maine, Marbury enjoyed a summer home in Mt. Vernon near the Belgrade Lakes, about which more soon.
Sailor, hiker, and aesthete, Sturgis Haskins, a friend of 40 years standing,  one of the most remarkable  of the many remarkable people I've had the pleasure to know, was perhaps the father of the Gay Rights movement in Maine.  He died a few weeks ago, and I am sad, as I suspect are his hundreds of other friends, that he did not live to see this victory.  This post is in his memory. 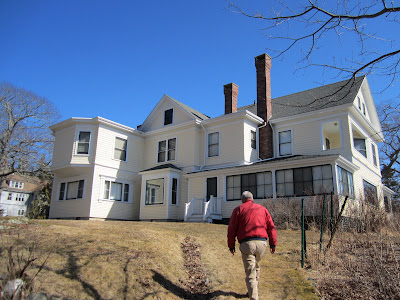 Posted by The Down East Dilettante at 10:20 AM

As I said elsewhere, I think it's the best possible way to change the laws. And it succeeded by a wide margin.

P.S. Good for Mother Dilettante, too.

What marvelous news for Maine!

Seems a level-headed lot you have over there.

It was a happy evening for sure :-) How amazing to have your mother be part of all of these political changes and have her so level headed. We're not all so lucky!

We are on the same page today, dear DED. xxoo.

Dear Dilettante, I can feel your pride, and well placed it is.

It says so much about what was at stake (is at stake) that so many people not only came out to vote, but stood in line for hours. I voted at 10:00 a.m. on November 6th and was told by a polling official that 80% of my precinct had already voted!

I hope the distinguished Mr. King can help bring some sense and moderation to the national scene.

I spent yesterday in a nine-hour-long jury selection process and came home almost speechless with fatigue and pissed off was unable to vote (seemingly our attempts at registering to vote had been mislaid or perhaps misunderstood) as the judge had urged us to do on our ways home. I went to bed fearful and awoke to the best news we've had on the political scene for many a month. So, congratulations and many sincere thanks to the people of Maine.

P.S. I wasn't selected to serve on the jury but I will say one thing: tedious as the waiting is in the selection process it was most impressive to see for the first time at close-hand how the the system works and how well it works.

Thanks, Brad. You are a beacon of light. Say, didn't I hear there was a vacant seat on Blue Hill's Board of Selectmen?

Congratulations and give your mom a big hug. Respect indeed!

good day for Maine. congratulations. NC was off this year while I feared it-the incumbent Dem governor did not run for a second term and I think that hurt the President. he lost the state by only about 3 percent.we elected a Republican gov this time-who has been running since he lost in 2008. As a state that held on toothlessly to Jessie Helms-we have come a long way-baby, and we will be back.
I for one Do deviate from agreeing with you esteemed editors-especially when politics and the good and evil of it threatens our own hearth and home. pgt

If I might be permitted to draw your readers' attention to a related development:

I'm very proud of our state! And how are you Dilettante? I haven't seen you in ages!

I am here to tell you that blog commenting is one of the most powerful traffic generation methods around. I believe blog commenting has taken over what traditional article marketing used to be.