Today class, we're going to consider the importance of thinking small, but in a big way. 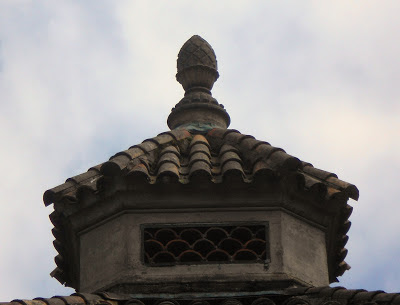 Edmund Beaman Gilchrist (1885-1953), was a gentleman architect, Philadelphia born and bred  His  specialty was residential design, although he also created some notable smaller public structures..  He was part of that distinct group practicing in Philadelphia---the firms Mellor, Meigs and Howe,  Duhring, Oakie and Ziegler; and Tilden, Register and Pepper---who were leading the pack in the design of beautiful houses that somehow managed to be picturesque and vernacular, and at the same time, imaginative, modern and new.  These architects were among the most imaginative, and most influential of the era in residential design.

In the first half of the last century, this stretch of the Maine Coast, and Northeast Harbor in particular, was known as 'Philadelphia on the Rocks', and indeed it sometimes seemed in this Dilettante's youth that there was a Philadelphian behind every tree in the summertime.   Thus it was only natural that Gilchrist and his peers would receive many commissions for summer houses in the region.  Collectively those cottages constitute some of the best architecture produced up here during the 1920's and 1930's and five of those houses have been chosen for inclusion in my book.  (For those, the faithful reader will have to wait.  And it will be worth it) . 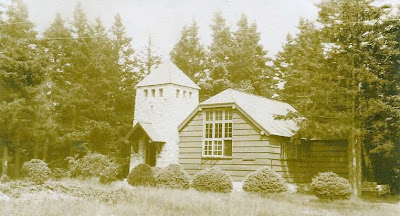 For my entire life, I've enjoyed looking at--and learning from--Gilchrist's work here in Maine.  Picturesque as his buildings are, they are also at home in their surroundings, precise, elegant, understated,  but never under designed, and not without surprises and mystery, and in that eclectic age, he proved himself an adept player of the game, always creating something fresh from traditional idiom.  Here are three  buildings whose small size belies the vast quality of their design, making mockery of so many of the overblown structures of today. 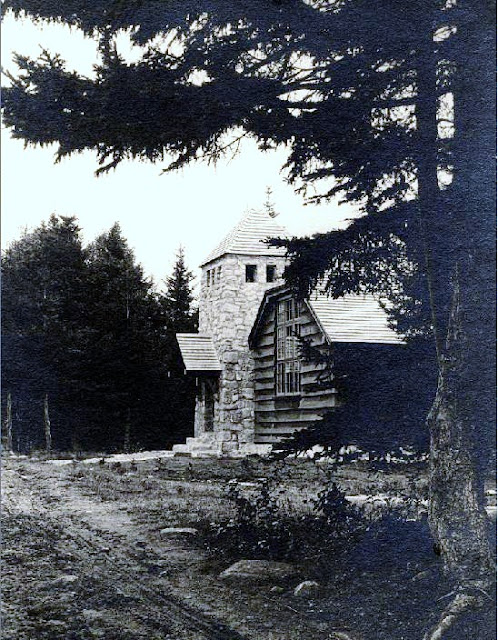 Eleanor Denniston, like Gilchrist from was from Germantown.  She summered on remote Petit Manan Point, far from the social whirl of Mt. Desert Island.  In 1911, she commissioned Gilchrist to design a chapel for her property at Petit Manan.  It is a simple, almost miniature building, in the English tradition, but nearly reductionist in its design. A tower was built of stones hauled up from the beach, the slab siding was cut from trees on the property, and the interior was left unfinished, dependant entirely on simplicity, light and proportion for effect.  Click HERE for an evocative series of photographs which give a far better idea of this building. 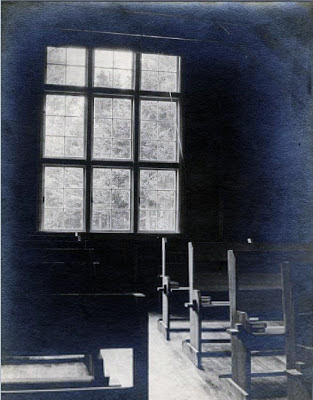 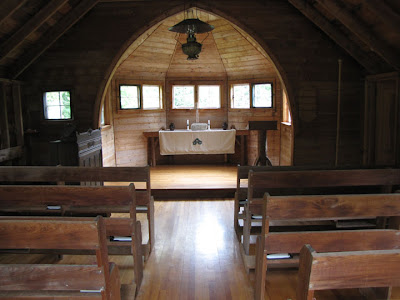 As one approaches Islesford on Little Cranberry Island off Mt. Desert, if one can take one's eyes off the spectacular scenery for a moment, a little cluster of buildings comes into focus on shore,  Most are vernacular structure of clapboard or shingle--boathouses, sheds, small cottages--but soon one spots this sophisticated little brick building sitting tactfully in their midst, different from them yet, fitting in.  This is the Islesford Museum, built again for a Philadelphian, Dr. William Otis Sawtelle, an Islesford summer resident strongly interested both in local history and cultures, as well as the ancient history of the Mt. Desert region.  He commissioned Gilchrist to design this elegant reductionist structure for his collection in 1927.  It is now the museum for Acadia National Park.  I could happily live there, should the Park ever tire of it.. 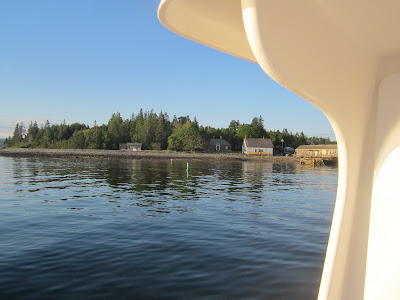 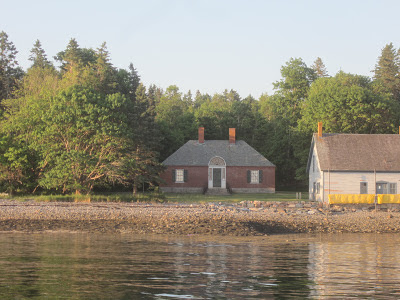 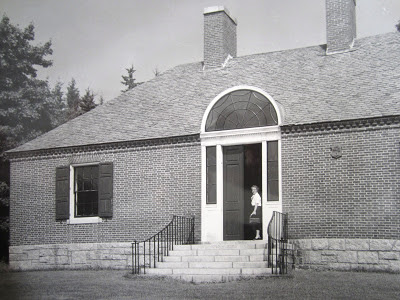 Outside, it is as reductionist and as imaginative as a Delano & Aldrich design, beautifully detailed, its unusual hooded fanlight echoed by another, this time antique, over a  door within. The brick is handmade, the details no more and no less than are needed for effect.  Inside, a hall connects three rooms on a 'T' plan with brick walls and gray painted floors, a fireplace in each room.  It is spartan, quiet, and cool, and for all its city airs, feels exactly right for its island location.  Sadly, I have no interior photos available.


At the other extreme, Bar Harbor in the 1920's was at the height of fashion.  Through much of the early 20th century, the Italian styles were popular there, being thought appropriate to the scenery and as a backdrop for summer gaiety, and many of the large cottages there were veritable replicas of Tuscan villas.  Even new  Lafayette (now Acadia) National Park, designed to keep the landscape forever wild, did not escape.  At the Park's Sieur de Monts Springs, local architect Fred Savage was commissioned to design a protective structure over the spring, based on a design by summer resident Egisto Fabbri, that would not look out of place in the countryside near Florence.

Thus in 1926, when Robert Abbe, a pioneering radiologist who was also an amateur archaeologist made plans to create a small museum for his collection of Stone Age antiquities, it did not seem incongruous that he would commission Edmund Gilchrist to design the museum in the style of a Florentine chapel at Sieur de Monts. (Okay, it is incongruous, an Italian chapel in the middle of the forest, housing ancient Native American artifacts.  But it works.)  Dr. Abbe died before his museum was completed in 1928

Even with Savage's spring house as introduction, it is a surprise to walk up a gentle wooded trail and suddenly be faced this exquisite little echo of the Renaissance in the forest.  Yet, it is a tribute to Gilchrist's skill that the building also seems inevitable and appropriate, even right in its surroundings, against all logic. A critic once wrote of the unexplainable alchemy and mystery of Gilchrist's architecture.  All of those qualities are present in this cool, understated building. 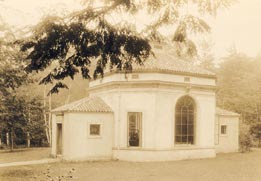 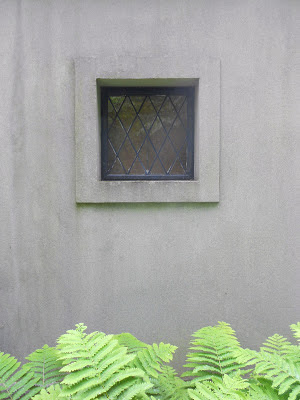 The domed main room maintains its period museum charm, with original display cases, dioramas, and relief maps created by Dr. Abbe.  These maps were in great demand among his friends and were decorative features of several Bar Harbor cottages. 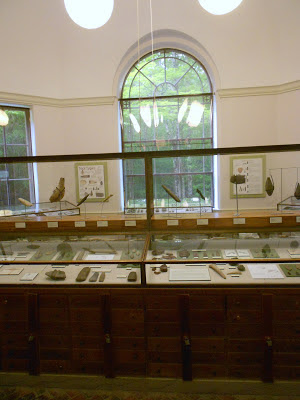 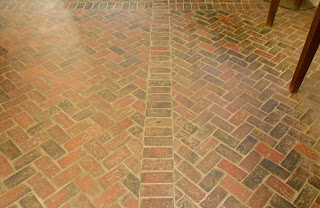 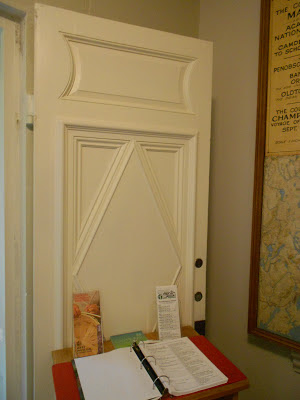 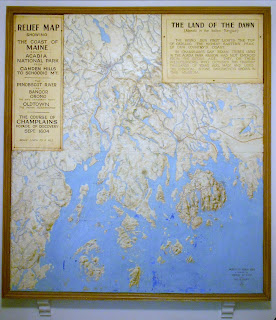 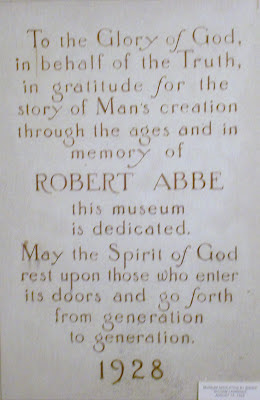 Posted by The Down East Dilettante at 1:34 PM

The placement of chimneys is particularly interesting on the brick museum building. The design of all three buildings is noticeably well thought through.

I. Want. That. House!! Green eyed monster of jealousy has overtaken me. Reggie

Professor, this is a particulary tasty seminar on "simplicity, light and proportion" today, thank you.

I am happy for Reggie to take the Islesford as that leaves the Abbe AND All Souls for Me. My mission at the Abbe, yes I accept it, is to return the building and its surroundings to the unvarnished elegance of the aged postcard photo you posted. What joy it will be to take up that asphalt, out will go the pair of Lowe's in-a-box-u-bild-it park benches, pull out the silly sod, bring in a few semi-mature trees to shrink the clearing slightly, even the bright green of the ferns jars somehow, couldn't agree more about the banners [Board member: "The entry, we need COLOR!"]

My selfish mission at All Souls [thanks to your interior photos link] is simply to remove the pews, and move in. Would you like me to have the pews delivered to the storage area at your shop, just a little gift of thanks to you for all you do to enrich the internet.

Reggie is going to have to arm-wrestle me for the brick building.

My opinion is that lined with bookcases, the Abbe building would make a very fine little private library---a nice renaissance work table in the center...

I have to join the chorus vying for Islesford, but with one weird question that will illustrate my OCD perfectly: is the limestone cap on the chimneys as shown in earlier photographs missing? I spent a lot of time looking over contemporary images of the museum and the chimneys definitely look different, and in fact I'm not sure they are a true pair any more. The right chimney appearing to be 1 or 2 coursings shorter than the left. I don't believe it's the light in the images -- I counted the coursings where I could. Unacceptable. What next? With a design this austere, the devil is in the details -- everything must be maintained to the highest degree or it loses a lot of its potency; not exactly forgiving architecture. I'd still claim Islesford as mine, though.

Just stumbled upon your blog, and your site is such a great source for renovation and housing design.

You almost triggered my OCD with your comment---I was facing many sleepless nights over those chimneys once you pointed out the discrepancy, but rest easy---there is no lost granite or limestone coping on the ceilings---what you are seeing---and it took considerable enlargement of the photo for me to realize it---is a sheet zinc or tin winter cover placed over the chimney (the building is unused in Winter, and it is often done to keep out rain and birds and drafts.

But there's still the matter of those not quite matching chimneys...

The Philadelphia-Maine connections are interesting--way down south, our family home in York Harbor was also built as the summer home of a Philadelphia family. For some reason, maybe because I just read an article on them, several of these structures are reminding me of the wooden Russian churches captured by Richard Davies: http://www.nytimes.com/2013/02/21/garden/an-architectural-photographer-on-saving-russias-wooden-churches.html?_r=0

As always, Thank You, DD.

I think the asphalt path might be more of a shame than the signs, though. Someone ought to take up a spare pine needle collection, and just cover it up one night . . .

Forgot to mention, I agree with Donna! I put a photo of one of those churches on my blog a couple years ago and I thought of it again looking at this this morning!

I also thought of some of the octagonal houses we have in Connecticut, where I grew up:

These remind me of one of my favorite houses ever!

Jerome Zerbe's house in Essex Connecticut!
I've only seen a few pictures in "Happy Times"; but just ordered an old book that has 10 pages on it!!

Welcome to Exteriors Plus MN, We are the best savage commercial roofing contractor that provides the savage steel siding service. We are a savage specialist for roofing, siding and window services.