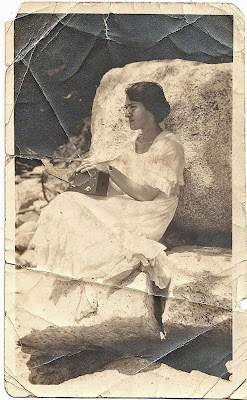 I treasure this tattered photograph of a young woman in summer dress, leaning against the rocks on the shore, her Kodak Brownie at the ready, gazing into the future. The location was her future mother-in-law's cottage.  The day was her 20th birthday, a warm day in late May 1921.  The young man who took the photograph would become her husband two years later.  They were my grandparents.  Sixty-seven years later, he still carried this photograph in his wallet, and as my grandmother was pleased to point out, never forgot Valentine's day.
Happy Valentine's Day.
Posted by The Down East Dilettante at 10:58 PM

These walleted photographs are telling, I love a good love story any day of the year.

Hope you and yours have a Happy Heart Day!

Mesmerizing photograph. Enchanting story. Yet its singular importance is in the personal.

HOW LOVELY. THAT IS SUCH A HEART WARMING STORY. THE WORLD SEEMED SWEETER THEN. GLAD YOU STILL
HAVE IT.
YOU HAVE A HAPPY WEEK END.
THANK'S FOR SHARING..

She is lovely. No wonder he carried her with him every day. Happy Valentine's Day you big softie!