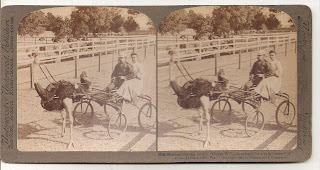 Ostrich 'Oliver W' pulling a cart in Jacksonville Florida.  He held the world's record for trotting ostriches, a 2.05 minute mile
Long ago, in a more innocent age, back even before the Dilettante was born, the stereo viewer, a device through which two side by side photographs mounted on a card could be viewed with three dimensional effect, was a popular household entertainment.  With this device, one could view a story told by multiple cards, travel the world through photographs, view the latest disaster, or simply enjoy pictures of one's friends and relatives. 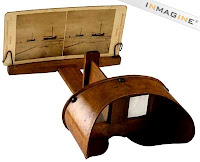 By my childhood in the 1950's, a device called the View Master, with a round disc of tiny transparencies, had replaced the stereoptican as the device of choice for the armchair traveller or curious child.  And now, we achieve the experience at the click of a computer mouse. 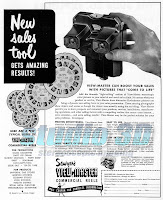 Despite the up to date technology of my View Master and my View Master projector, I remember well what a thrill it was to be allowed to play with the Stereopticans in my great-grandmother's parlor, a room where time had stopped around 1890. There were two:  A hand held device, like the one above, in which the cards were placed at a distance in a holder, and then viewed through two lenses in a face fitting frame, and the other, a large rosewood box with gilded corner mounts, and two viewing lenses, through which one would view the cards laid inside.  Needless to say, the latter was only used with supervision.
I had intended to write today about 18th century garden houses in New England or the moving of The Lindens , or maybe the scenic wallpaper at the Jeremiah Lee Mansion. However, about 48 hours ago, I came across a large box full of stereo views that my mother had squirreled away years before, and even without a viewer at hand, I've been complete diverted ever since, time traveling through these amazing 19th century scenes, transported to other times and places. 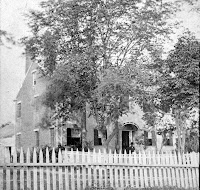 Part of the marvel of the stereo view is that the pictures are not prints of the photographs, but direct from glass negative, giving extraordinary detail.  I was looking at a view of an old house here in the village, and suddenly, in the elegant fan doorway I realized I was looking face to face with the long ago owner, standing in his doorway in top hat, gazing straight at me, a tantalizing glimpse of wallpaper barely visible in the dark hall behind him. 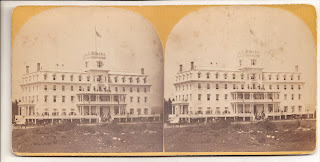 In another, a long vanished summer hotel, built on the ramparts of a revolutionary fort 30 miles from here, stands high above the bay, with people crowding its porches and balconies for some celebration long forgotten, and a buckboard waiting on the drive below.  The picture is so immediate that one can almost here the shouts of this crowd, smell the salt air, hear the crunch of gravel under the wheels, yet it is so unmistakably not of our time.  One has entered a time machine 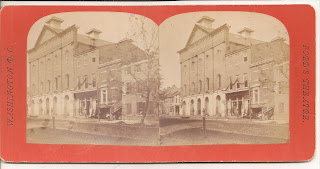 A view of Ford's Theatre in Washington, clearly taken shortly after Lincoln was assassinated there, shows tattered black crepe fluttering from the buildings, and two soldiers shouldering rifles guarding the entrance, people in the hot street watching the then unusual event of a photography in process as they are captured themselves for the ages. 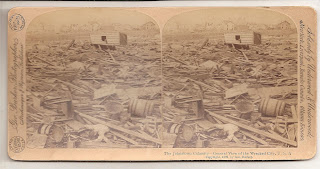 A view of the devastation of the Johnstown flood, long before the newsreel, shows what appears to be a body under wreckage in the foreground.  Startled, I started to push this one aside, thinking how little the debate about whether to photograph bodies in war or tragedy is not a new one, but instead, looked more closely, and realized that this one was staged, and the man has posed amidst the wreckage for the photographer, face down, under a board. 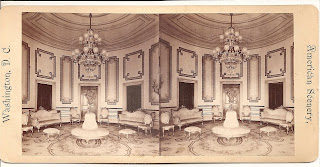 The Blue room of the White House, ghostly still, long before the tasteful redecorations of either Theodore Roosevelt of Jacqueline Kennedy, firmly centered by a circular sofa, whose proper nomenclature suddenly escapes my antique dealer brain. 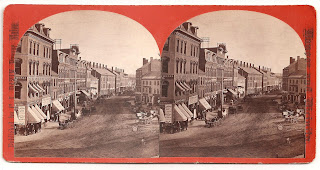 Exchange Street in the lumber boom town of Bangor, Maine, one of the flourishing cities of the East Coast in the mid 19th century, now a backwater of shopping malls and sprawl and grand old mansions cut up into tenement apartments.  Most of the buildings in this picture were lost to urban renewal in the 1960's and were replaced with parking lots and blocky bank buildings with no life at street level.  Notice the optician's sign in the foreground. 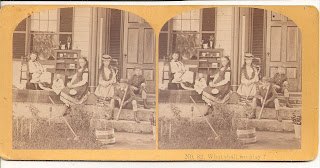 Children of the 1880s, sitting on a porch, toys and games at hand.  Tennis anyone?  Baseball?  Croquet? 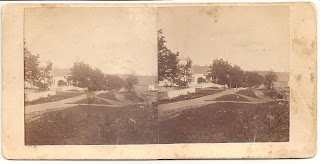 My own street, in the 1870's.  The houses are shuttered against the summer sun.  Fences keep the animals out of yards, the street is dirt and still follows the contour of the hill.  Every house in this picture still stands, in good repair, yet the scene is so different.  The young elm trees had grown up by my youth to form an arching green tunnel in summer, only to mostly succumb to Dutch Elm disease in the 1970's.  Yet, a couple still survive, their crowns rising seventy feet above the street. 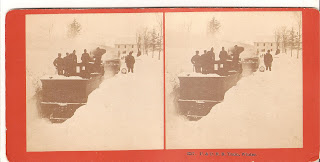 A train of the Portland & Ogdensburg Rail road, being dug out of the drifts of a long ago snowstorm---Amtrak travelers stranded by the latest storms in the mid-Atlantic, take note. 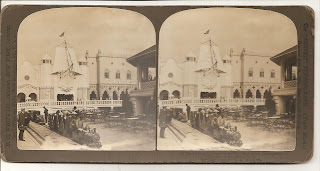 And last, long before Las Vegas gave us the international experience at the Bellagio, there was Playland at Coney Island, where one could board the smallest locomotive train that carried passengers, and travel past a pasteboard version of the Doge's palace in Venice.

Faux Venices, trotting Ostriches....what funny people we Americans are....and how easily entertained.
Posted by The Down East Dilettante at 3:27 PM

Oh that snow scene hits a little too close to home! I have some great stereos...some fabulous French gardens.

Remarkable clarity and what a sense of nostalgia! The images are even more astounding when viewed in the large size. I would have been transported by your treasure trove too..thanks so much for a wonderful post!

We have one of these devices at home, and they are indeed remarkable.

you can get the effect without the cardholder. according to the lindsay catalog, the way the cards work is the two photos are shot from a slightly different angle and when the lenses in the holder combine them, it mimics what our eyes do all the time. your left eye sees a slightly different pic than your right eye and the feeble mush in your head makes them into 3D. so, if you have the cards but no viewer, just stare between the two pictures and let your eyes go out of focus and the 3D picture will appear between the other two.
its more fun with the viewer but not everyone's granny kept theirs.
we had the viewmaster and many discs when i was young and in later years, i found one of the projectors. what a technological advance.
thanks for the memories.

Hello DED,
Marvelous posting, a delight to read and look at. My mother was mad for stereoscope images, and I have several hundred of hers (along with the viewer) in a box I haven't looked at in over a decade...

I must dig it out.
Reggie

I live in Washington Maine. I own http://stereoviews.com with one of the largest inventories of stereoviews in the world. David Spahr

I have my great grandmother's cherished one with her more cherished dozen or so views. Love seeing yours- I have purchased a few additions just for fun. I will indeed check out the kilgore site.