A Down East Chandelier---Oh Buoy! 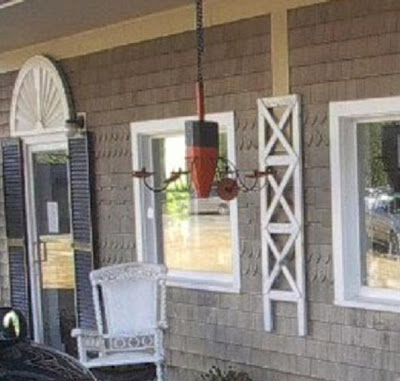 I don't have a better picture of this entertaining  item that passed through inventory a few years ago, and I cropped this out of a larger picture of the store, hanging out front---but I am surprised that it's the only one I've ever seen.  It's a true Down East Maine original---a chandelier made from a lobster buoy.  Though one can't tell from this picture, it was actually rather attractive--nicely curved iron arms attached to the body of the buoy, with tole candle holders painted to match, and suspended from a sturdy bit of anchor chain.   It had great scale, and was just the thing for a big rustic seaside boathouse----the Down East equivalent of a wagon wheel chandelier in a New Mexico adobe.
For the uninitiated, all those of you unfortunate enough not to  live within breathing distance of the Atlantic ocean,  a lobster buoy is one of the  major sights on waters around here---brightly painted, as surely as a racing stable's colors to identify its owner, and show where his underwater traps are.   From the black and orange of this buoy, one is tempted to speculate that this lobsterman  may have gone to Princeton.   One of my favorite clients had a sweet old husband who lived for three things, Golf, The Republican Party, and Princeton.  He wasn't much interested in antiques, but would sit in the car with his Wall Street Journal, waiting for her to make her purchases.  Until the day that he spotted this....I have almost never seen a husband so excited in an antiques shop....his very own school colors!!!
Posted by The Down East Dilettante at 5:17 PM

Oh goodness...whatever floats your boat (sorry, I couldn't resist). I love it.

In the right setting this would be divine. In the wrong one it would be a kitch nightmare. It's all about context, but isn't everything? I lurv it.
Reggie

I've always said no one can touch Mainers when it comes to recycling and here is spectacular proof! A wonderful item....glad it went to such a happy home.

Another example of your tripping the light fantastic. Do you think it matters if you are a buoy or a gull for this to be truly appreciated?