While preparing last Saturday's post about an old friend's apartment, I was flipping through The Finest Rooms by America's Greatest Decorators, a wonderful compendium given me back in 1967 when I was fourteen. (Yup, the die was already cast.  Someday I'll tell you about the silk neckerchief I affected that same year.  But be kind when I do.) 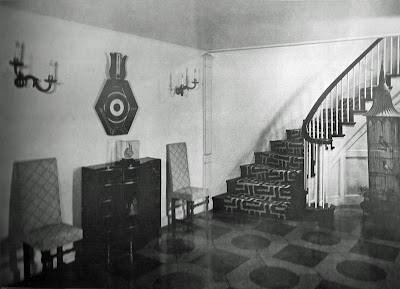 Pictured in the book is this wonderful stair hall designed in the 1930's by Billy Baldwin, the master of edited chic.  The interplay of stair carpet runner, the sensational patterned floor , and the wonderful fabric on the chairs is nearly perfect.  Looking at the stair carpet, I think it is safe to guess that Baldwin was familiar with the grand circular stair of the Kersey Coates Reed House in Lake Forest, decorated by Frances Elkins. The interplay of scale between patterns is masterful.  The photo caption gives a hint of the color scheme: "Lacquer, a black and white still modern stair carpet, Dutch in quilted beige linen, a remarkable beige floor in patterned stone, brilliant emerald glass sconces".  Wham! Pow!

The only mystery remaining is what color was that amazing barometer on the wall?  It looks as if its faceted frame is eglomise glass (gilded in reverse), but what color glass?  Black?  Green?  I'm hoping green.

Despite the caption, written 25 years after the hall was photographed, I find myself wondering if the inlaid floor isn't actually Zenitherm, once a favored flooring material of decorators and architects like David Adler, who often used it to stylish effect. 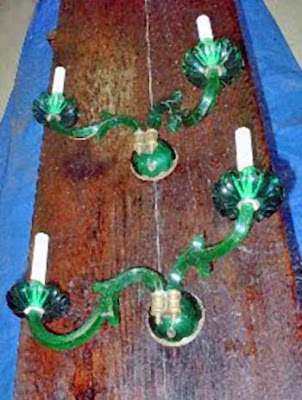 Apologies for the lousy photograph of the sconces--they were on a table top, not on the wall, and I was still figuring out my first primitive digital camera and the concept of resolution, ten years ago. Bad case of old horse, new tricks.
As my seven or eight regular readers know, I enjoy connecting the dots.   It happens that I once owned a pair of those snappy emerald green sconces.  They were sold to me as Victorian, and the seller's idea was that they had perhaps once been arms to a chandelier.  Later, I chanced across an identical pair in clear glass, which were positively known to be Steuben, from the 1930's, making it most likely that these were also.  Their very Vogue Regency style would support the latter. thesis.  Whatever their origin, what really matters in the end was that, like the room above, they were GORGEOUS, and I hope the person who bought them from me is still enjoying them.
Still to come at Down East Dilettante:  My focus returns to New England with 'The Third Mrs. Astor,' 'A Favorite House', 'When Bad Things Happen to Good Houses', and 'Shelter in New England Gardens'

Posted by The Down East Dilettante at 5:31 PM

That is the first time I have ever seen sconces like that.

I keep this hall in my head always as the combination of floor and stair carpet patterns plus green sconces just sends me. I agree with you about Zenitherm being the floor material, nothing else looks or act quite like it.

So great and as one of your regular readers, privileged I should say- I love the investigative part. Well done, Sherlock. Those green sconces are dynamite and are you longing for more than the picture? What a wonderful book to have gotten at 14, ah and the scarf-thing can not wait for that. Billy B- yes a perfect description edited chic!

Yvonne, you know what they say: "March comes in like a lion..."

Anonymous, thank you. I blush at the compliment.

Little Augury, you don't want to know about the neckerchief, you really don't. Worn with a very nice Glen plaid sport jacket and a pink oxford button down, it was a mod touch. I think I was trying to channel the Duke of Windsow. Unfortunately, I channeled him on a day that he was channeling Paul Lynde....

I graduated from high school in 1967 and I was channeling Jacqueline Kennedy and Audry Hepburn. I wonder what I would have done if I had been given this book when I was 14. I don't think I was evolved enough, yet. So nice to have such erudite youngsters to ferret out the facts of such loveliness and pass them on to us. Great mysteries do abound at DED. Can't wait for the next installment.

"Down East Dilettante to Block!"

i picked up a badly smashed chandelier at the dump that had arms like those sconces. i thought it was more modern but maybe not. have to give its remains another look.
to me, the odd thing about that hall is all that modern pattern stuff seems to be in a sort of colonial interior - maybe neo which i suppose would make it all right in someones mind. love the sconces and if the barometer was green it would match.

sorry - i couldn't come up with a good definition for the security word - "maetedic" - maybe you can.

This sconce is very unique. I haven't seen this type of sconce yet. I think this green sconce fits in a kid's bedroom because it looks so playful to the eye. When I turned 14, I told my dad to install traditional hand forged iron sconces in my bedroom, because I want my room to look more lady-like. My dad agreed with my suggestion. He bought sconces and some hand forged iron fireplace accessories.

Just stumbled onto this blog today. I can answer the question as to the color of the barometer because this house belonged to my grandparents. The barometer is black and gold "verre eglomise".

Ruby Ross Wood, Billy Baldwin's employer/mentor before he set out on his own, first decorated this house. In fact, the decor of the foyer is much more a reflection of Mrs. Wood; Billy only made two minor adjustments here. These include reupholstering the Dutch chairs (originally in pink leather) and the addition of the Gothic style birdcage. Mrs. Wood's decoration of my grandparent's home can be seen in the July 1949 edition of House & Garden.

Boy, those green sconces are something!

this comment by "anonymous"
has to be the stellar moment of your experience in the blogosphere!

I think we have to believe him/her!

Lordy! I have to say again!

Interesting......there are no "HEADLINES" in the blogosphere!

Fascinating! This is!!
Penelope

Sheesh! Who could guess that from that picture......except you??

And how did the grandchild stumble upon this?

Do we believe this? I do!! No question!!

(proof of the puddin)g......I have set out a search for the July 1949 edition of House and Garden) I want it for reference of great and exquisite taste!!