If It Ain't Broke, Don't Fix It, # 3: When Bad Things Happen to Nice Buildings 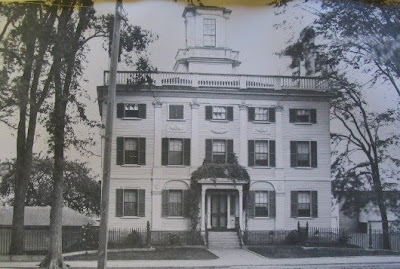 The Pierce Mansion in the late 19th century, with Victorian Porch
The Pierce Mansion on Middle Street in Portsmouth, New Hampshire, is one of the great Federal houses of New England, an American interpretation of Adam motifs.   Built in 1799 by John Pierce, the house remained in the hands of his descendants until the 1950s.  The design is sometimes attributed to Charles Bulfinch, and indeed is nearly identical to his now demolished Appleton house in Boston, and has details virtually identical with those on his Ezekial Hersey Derby house in Salem. 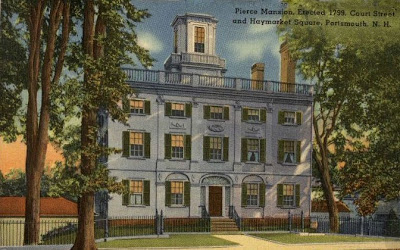 In a 1930's colorized postcard
The house was situated at the head of a curve in the street, a location meant to impress . The over scaled cupola gave an almost monumental appearance to the otherwise delicately detailed house, and the attenuated neo-classical detail of the house signaled a new direction in design from the Georgian and Rococo that had dominated Portsmouth architecture for the previous half century.  Here is seen the optimism  and prosperity of the New Republic. 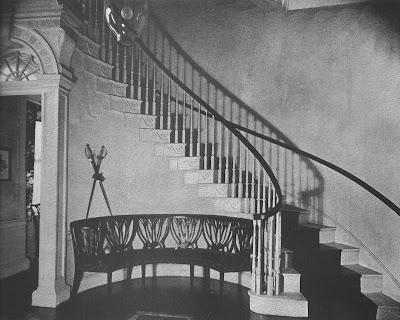 One entered a wide hall with delicately carved woodwork in the 'punch and gouge' characteristic of Federal work.  To the left was an elliptical staircase flanked by arched openings, with delicately reeded woodwork giving delicate life to the composition.  In the curve of the staircase sat one of the extraordinary pieces of furniture to survive from the era, a curved shield back Hepplewhite settee, built to sit against the curved wall of the stairwell.  So extraordinary was the settee in the canon of early American furniture, that it was pictured on the cover of the very first issue of The Magazine Antiques in 1922. 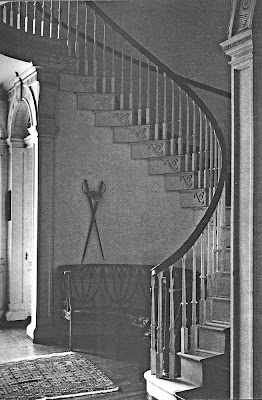 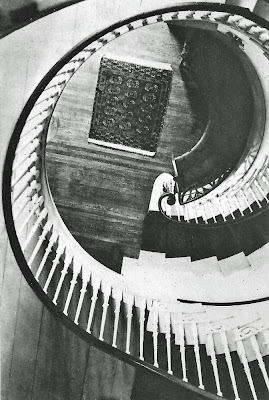 Two views of the stair, by Samuel Chamberlain, from Portsmouth, A Camera Impression (Hastings House, 1940)
In the 1950's, the house was occupied by Mrs Winslow Pierce.  Her son, the next heir, was uninterested and unwilling to take on the house.  The curved settee was sold to Henry Francis DuPont, and taken to Winterthur, where it can still be seen in a niche built for it in an upper hall, stripped of its original context. 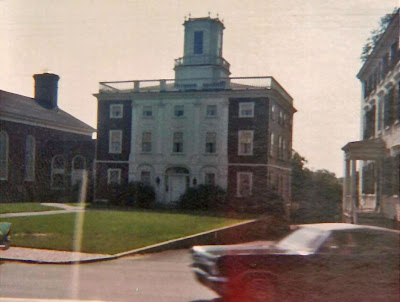 The Pierce House in the 1960's, red and white, and more than a little blue.
The house was placed on the market, and purchased by the Baptist Church next door for use as meeting space and vestry.  Although their intentions have not been bad per se, they have chipped slowly away at the integrity of house and setting, and stirring though the house is, it is also sad making.  The great curving fence that embraced the facade and tied the house to the street, was swept away.  The new church, designed in a flat, well meaning 'colonial' style was joined to the house by a wing, badly scaled.  The house was painted red and white to 'blend' with the red brick and white trim of the church.  The front walk was rerouted to a divided path that split the difference between the connector door and the main door, removing the front door's direct axial contact with the street.  It is very awkward looking, and more than a little sad.  The rear grounds were leveled and paved for a large parking lot.  The house became white again, but only by dint of the addition of vinyl siding.  Plastic shutters, screwed to the sides of the windows, replaced the original working shutters.  (NOTE:  For more on the Dilettante's stand on plastic shutters, read here)  Now, where was I?  Oh yes. Pierce mansion.  The balustrade was next.  A new balustrade on the roof is thinly made and constructed in relation to the old one, further destroying the scale.
Personal Note:  Our friend Gregory, a man of both formidable taste and purse, and his wife then summered at nearby Kittery Point.  He was taken by relatives to visit Mrs. Pierce, who it was understood, wished to sell the set of Chinese Chippendale chairs in the drawing room, one of the rare American sets in this style., originally owned by the brother of New Hampsire's last Royal Governor.  The motivation for the sale was that the disinterested son desired money for a new pick-up.  The chairs went later with Gregory to his  summer home on Coolidge Point in Manchester Massachusetts.  A few years later, Gregory hired the Boston architect W.W. Brewster to build a brick house on the estate.  Mr. Brewster was at the time also involved in the restoration of Gore Place in Waltham, and persuaded Gregory to donate them to Gore Place, where they can still be seen, in another of New England's great Federal Houses. 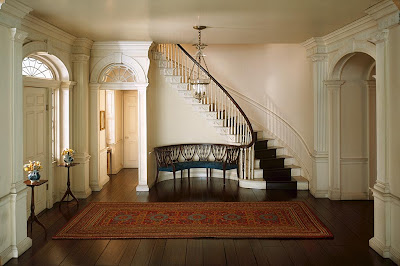 Just for fun:  A tiny rendition of the Pierce hall by Mrs. James Ward Thorne, part of her famous collection of miniature rooms at the Art Institute of Chicago.
Posted by The Down East Dilettante at 11:53 AM

Down East -
Thanks for such an interesting post on a really lovely house. Depressed me though as I moved down the pictures. HOWEVER, at least the house still stands and maybe one day a more sympathetic renovation could happen. Loved the Thorne Room pic too - and here it doesn't even look like a minature!
Doug

Sad but not untypical story as far as old houses are concerned, but it survives and may well, as the Anonymous says, be restored. That settee is wonderful and I assume it was made here in America. I'll look for the photo of the Thorne room - I have the book.

jeez - dilletante - you might convert me with this place. OMG - what am i saying. i always liked the scale of the three story federals - they were the precursors to the li mansions of which i am so fond. but more balanced, more thoughtful, more precise. what an entrance hall and that banister. more calculations went into that than the space shuttle.
the good news is with religion on the decline, maybe someone with sense will buy it, demolish the church and restore it to its former glory and symmetry. it looked so nice all one color. maybe a grant from the plastic shutter manufacturers (to absolve themselves of their guilt).

security word def - "unervale" - a meadow that makes you feel high strung instead of mellow.

I agree lets be hopeful. I also agree about the complexity building a staircase. Today with all our power tools at the ready, the results are often so pedestrian.

Glad the snow is finally behind us. But today in the midwest, I awoke to the crackle of lightning and sound of thunder. Nature balances things out with such power!
My word verification is excarti: definition of a retired wheelbarrow toting gardener?

Chalk this up to when bad things happen to good houses. Vinyl siding and shutters? Oh my........the curse of the 20th century

A very sad story, but being that its owned by the church this leaves some bit of hope for a restored future.....
Might it have to be auctioned off someday to raise money for the possibly failing congregation or some messy church high-jinx?

Is the entire interior (all its millwork) intact?

Big fan of George W. W. Brewster. I Grew up around his work, really dig his mid century modernist take on the New England vernacular. His exteriors seem much more resolved than the interiors. Except the Runnells house (LR pictured in BB Decorates), an early Brewster and a great use of his good bones.

That staircase is one of the most beautiful staircases I have ever seen. I printed that picture of the Thorne model and I'm going to use it as the inspiration for the foyer of my future/dream house.

Also, this is one of my favorite blogs. I am an enthusiast of Georgian and Federal architecture (and the revivals), and I thought the entry on smalt was fascinating.