Vizcaya in 1917: The Interiors

When I posted early photographs of Vizcaya from the 1917 Architectural Review several weeks ago, I promised a post with the interior views.   I'm undeniably easily distracted, but I always get around to it in the end, lest you thought I'd forgotten   These pictures show the interiors, more plushly furnished than today, as Paul Chalfin first created them for James Deering.   The Deering heirs, in a plan to open the property to the public, removed many excess items to facilitate the flow of visitors, and to emphasize the antique over the modern.
For my previous posts featuring the early photographs of the gardens and exteriors, click here and here.
For the original article in Architectural Review, written by Vizcaya's presiding genius, Paul Chalfin, about the creation of the house (in which he churlishly does not give credit to landscape designer Diego Suarez), click here.  It provides fascinating insight into the sensibility that led to creation of this most extraordinary place. 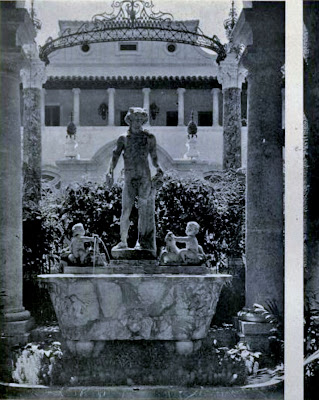 The entrance loggia, with statue of Bacchus. 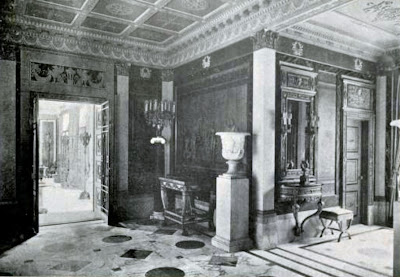 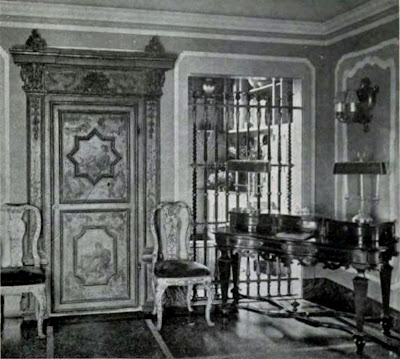 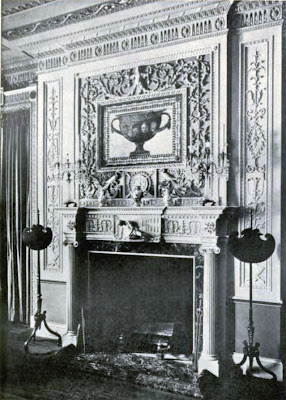 The Adam Library, with Roman mosaic above mantel 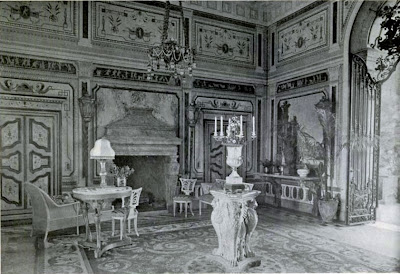 The beautiful reception room, with grisaille wall mural, and (above) the gate from the courtyard 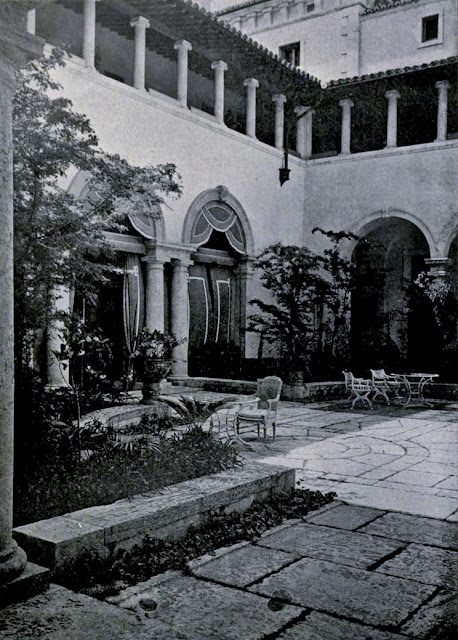 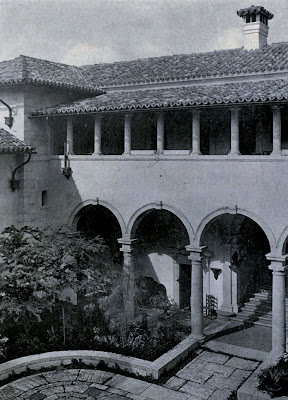 Shown here is the courtyard before the vandalism perpetrated on it by Vizcaya's then director and board in the 1980's.

As president of the board of a much smaller historic house museum myself, I am painfully aware of  and sympathetic about the hard choices facing museum directors trying to protect their buildings and collections.   The problems facing Vizcaya are huge---a house directly on a saltwater bay in a humid tropical climate, filled with textiles and furnishings created long ago in gentler climates.   Nevertheless, the rule of thumb in these matters is to approach the solution holistically, with as little intervention as possible.  At Vizcaya, one of the greatest houses in America, a perfect storm of ideas and needs resulted in one of the greatest acts of vandalism I have ever seen perpetrated on a protected historic building.   To seal the house for climate control, a decision was made to cover the courtyard with a glass pyramid, supported by huge concrete pylons.   The beautiful courtyard, open to the sky, recorded so beautifully in watercolor by John Singer Sargent, now has the feeling of an upscale shopping center atrium.  The experience of light and air is completely changed. There was no excuse. Many other solutions were possible.
Apparently, many architects and preservation groups banded together in protest at the time, but with visions of the Louvre Pyramid, and the ability to book the courtyard for all-weather events rentals (indeed, events venues are de facto an important factor in the funding of this expensive property) in their heads, Vizcaya's management forged ahead.  I understand that there is talk of undoing this awful construction, and as one who saw Vizcaya before it happened, I can only hope that it is taken down, and the integrity of the house restored. 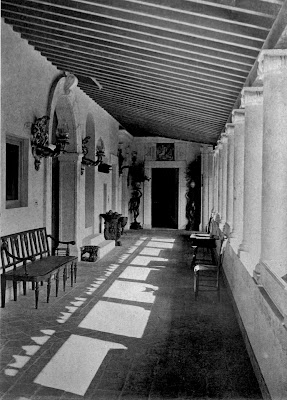 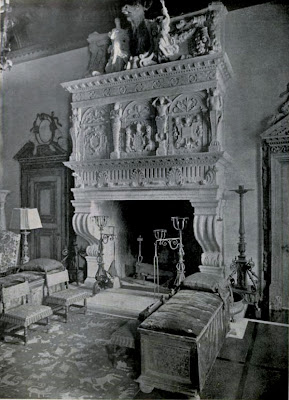 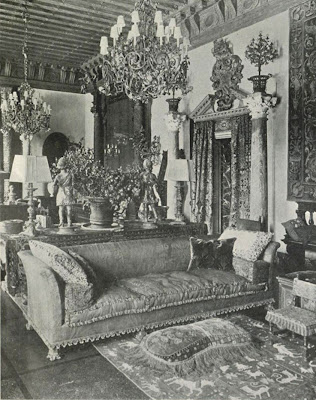 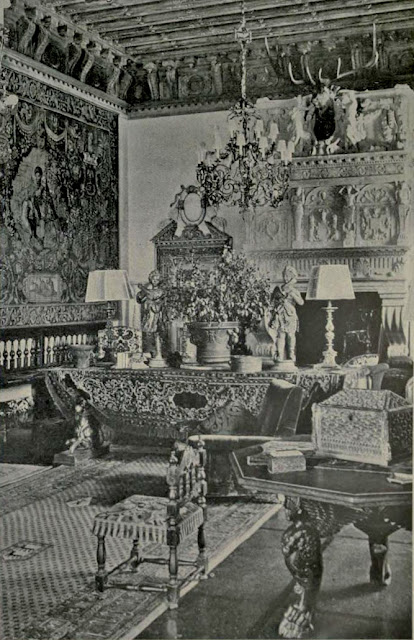 Three views of the living hall in 1917 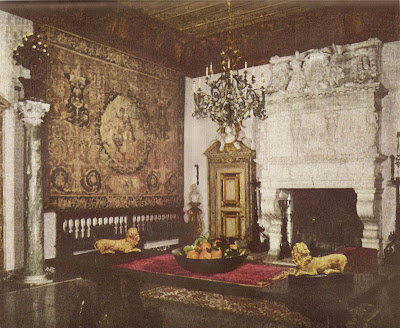 The living hall in 1950, nearing the end of Deering family occupancy 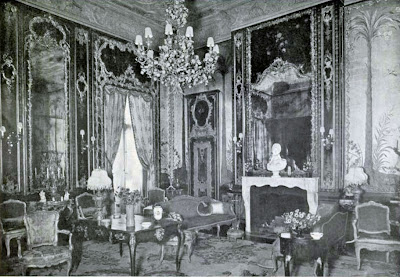 Two views of the salon, with 18th century Italian boiseries, and grisaille ceiling from an Italian palazzo, and 18th century French silk wallcovering with a palm tree motif, brought together brilliantly by Chalfin 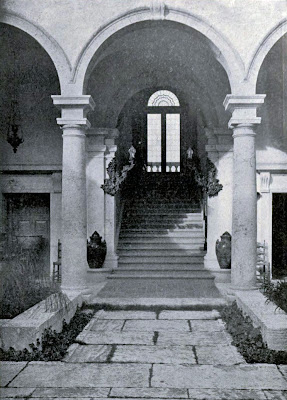 The main staircase from the courtyard 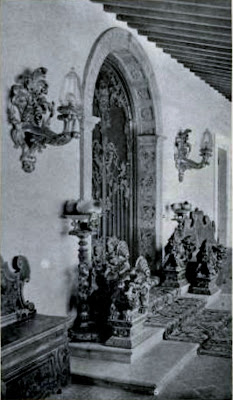 Gate from upper loggia to the breakfast room 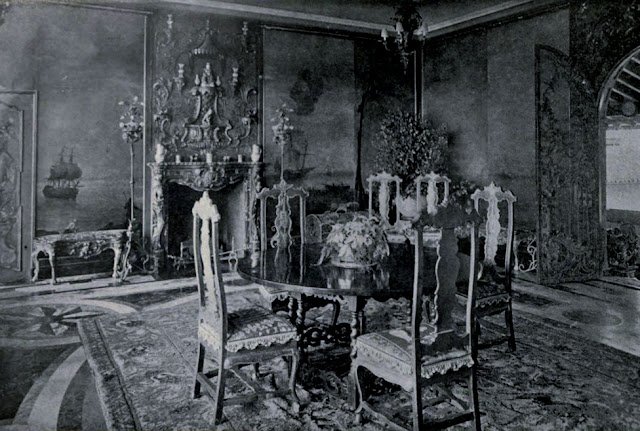 The upper dining room.  This room faces the formal gardens.  The first time I visited Vizcaya, the windows, which slide back into the wall were open, making of the room an open loggia.  The effect of garden and bay outside, and mural inside, was unforgettable. 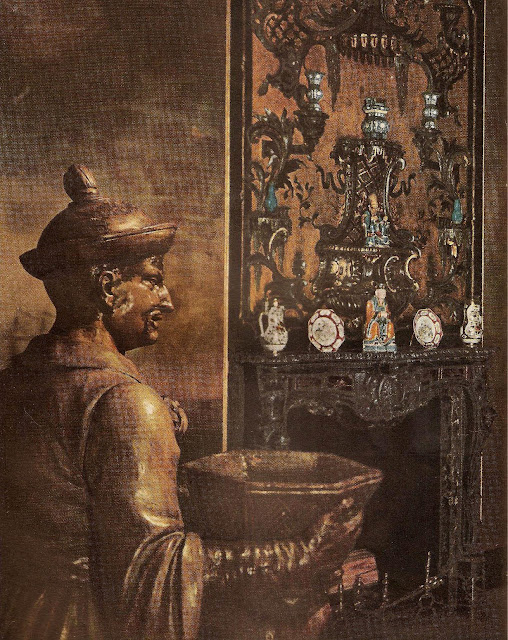 A view of the small dining room in 1950
The sitting room of a guest suite. 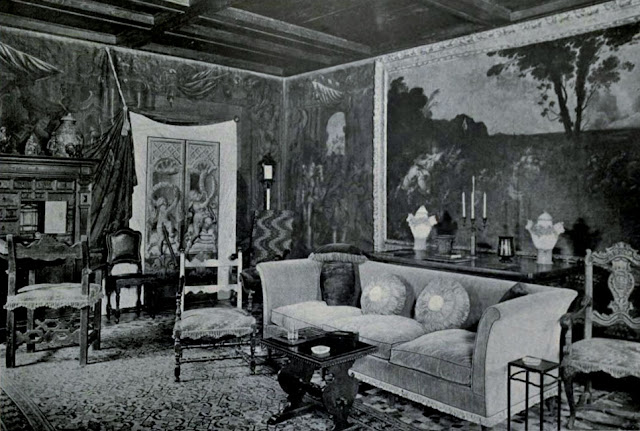 The ground, or basement level of Vizcaya originally contained a suite of rooms for recreation including a bowling alley, billiard room and the smoking room seen in these two views, adjoining the swimming pool.  These spaces are  now re-purposed as cafe and gift shop. 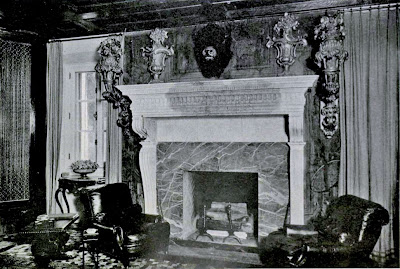 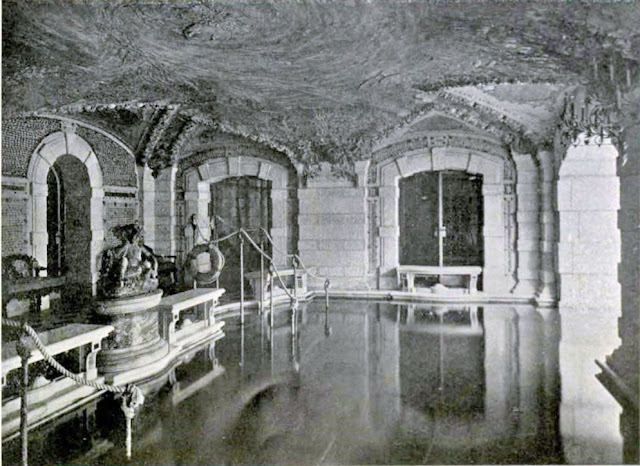 The astonishing swimming pool, partially outdoors, and partially covered by this fantastical grotto under the house.  The walls are encrusted with shell motifs, the ceiling mural of underwater scenes is by Robert Chanler.  The details are extraordinary---note the seahorse caps on the railing posts
Posted by The Down East Dilettante at 11:46 AM

Down East -
All I can say is WOW! Each & every picture you have here shows a stupendous creation. Thank you1
Doug

Fascinating, although personally I would find it all a bit too heavy for my own occupation. This house, like the chateaux, castles and palazzos that inspired it, is really more suited for its current use, as a museum. Even in their day these places had plenty of bodies around to fill the cavernous spaces, so that would make it more palatable, I suppose.

Every art historian or architectural historian would drool over detailed internal images of the houses they are involved in. Researchers at Vizcaya are very very fortunate.

I would want a separate group of photos taken in a house, before and after every single restoration or renovation. One mansion in Melbourne, a house that should have been studied and photographed at least three times in the last 110 years, has left me totally baffled :(

What an extraordinary house. I did not know about it before, so thanks for showing it in such detail.

I have just been reading a biography of William Bankes, a Regency batchelor who added lots of Spanish and Italian art and furnishings to his house Kingston Lacy in Dorset. But at Vizcaya everything was obviously on a much more lavish scale.

The covered courtyard sounds dreadful. At National Trust properties we also have lots of issues with climate control in old buildings, but as you say there are more subtle solutions. And interestingly, there is now a discernable trend to allow for a bit more climatic variation in museum environments, as objects are often more robust than we thought in the past.

Which historic house are you involved with?

Extraordinary~and a treat to see it richly and authoritatively furnished. As you say, it's an essay in
sensibility.

Absolutely breathtaking details in this historic propery. That courtyard cover must come down.

Well, it is spring break in Miami. Yummy.

I have been there many times and I can still see that pool, it is gorgeous.

I am so happy to see these photos of one of my favorite house museums as it was originally! I have visited several times and have been intrigued by Chalfin, a person about whom I know little. Is there any truth in the insinuations that Deering and Chalfin had a special relationship? (Not that there's anything wrong with that).

JT, I confess that as I wrote this post, the same question ocurred to me---it would make sense.

Paul Chalfin also designed a beautiful little Baroque style church - complete with onion dome - in Ashford, CT: St. Philip the Apostle in the Warrenville section of town, which had a large population of eastern Europenas. Apparently Chalfin summered in Ashford and became friendly with the founding priest. Sources say he designed the church in two weeks, and the community did the rest, working side-by-side with Fr. Dunn. Some photos here wihtin a slide show: http://saintphilipsaintjude.org/