The Frescoes of South Solon Maine

The Dilettante's curiosity frequently diverts him from his intended path.  This was the case a couple of Sundays ago, as I was returning from Newport, Rhode Island, where I'd viewed an exhibit of Gothic art in the opulence of Marble House.   It was a grayish day, with more than a hint of late fall, but as I reached Fairfield, Maine, the sun broke through, and I decided to veer off I-95 and head up to see the South Solon Meeting House, a place I'd known about for 45 years, and had always wanted to see, and on this day I decided the time had come. To get to South Solon takes some perseverance.  One drives up Rte. 102 to Skowhegan, and then up Lakewood Avenue and out of town, on the path for Canada.   The convenience stores and car lots of outer Skowhegan rapidly give way to open country----hardscrabble farmland, fewer houses, more forests.  It's a wilder, poorer, remoter Maine than the one on the south, coastal, side of Interstate 95.   As I approached Solon, I kept watching for some sign that I was there---I knew I was south of Solon village proper, and logic dictated that I must be in South Solon now, but nothing, almost literally nothing, was to be seen to give a clue.
The next day was the opening of hunting season, a serious event in this part of Maine, and in the village, I stopped to ask how to find South Solon and the meeting house at a convenience store adorned with a huge banner welcoming the hunters who would be arriving the next day.   The nice guy at the store directed me 'a mile back down the road, turn at the Quonset hut, and go about two miles'.  He said the road would get 'wicked curvy', and he did not lie.  It also went relentlessly uphill on its winding way, and after passing a certain elevation, I found myself driving on the first snow covered ground of the season, past evergreens and stone walls frosted with fresh snow.   At the crossroads, where once a little village had prospered, there now remained only a couple of old farmhouses, and the object of my quest, the 1842 meeting house.  It sat on its corner, a spartan little early clapboard structure in the beautiful, unlikey, mix of Gothic and Greek revivals that is often seen in New England Churches, a wonderful contrast to the Gothic and classical splendors I'd just seen in Newport.  The sun had disappeared again, and I went inside, to view the wonder of South Solon Maine. 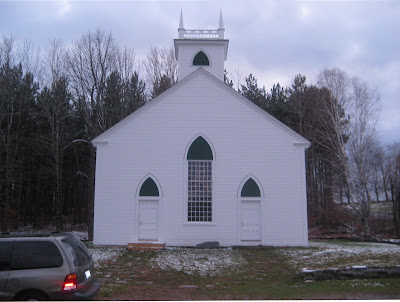 The South Solon Meeting house interior has been barely altered since construction, with only original coats of paint on what few surfaces ever were painted.   The interior is spartan, no more than is needed, with the box pew of an earlier age, and a high pulpit reached by double staircase, from which each Sunday the parson would endeavor to save his flock from eternal damnation. 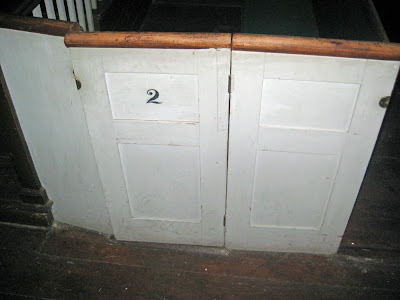 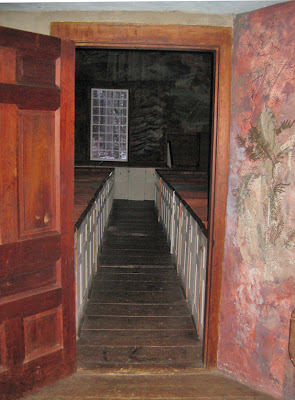 Ah, but are you still with me?  As beautiful as I find all of this, it alone would not be enough to take me so far out of my way late on a chilly afternoon.  No, the real astonishment of this isolated structure is a series of frescoes covering  the walls and ceilings of the entire interior, executed in the 1950's by students at the Skowhegan School of Painting & Sculpture.   The Sistine Chapel it isn't, and in fact the overall effect is both odd and beautiful, but the story of how this unexpected New England evocation of an Italian hill church came to be is fascinating. 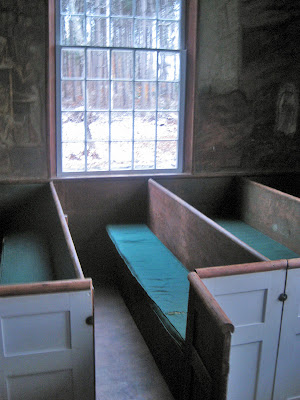 As I was walking toward this section, the pew door quietly and slowly swung open.  It happened to be Halloween
The Skowhegan School was founded in 1946, concurrent with the rise of the New York School,  by portraitist Willard Cummings, muralist Henry Varnum Poor, stone sculptor Charles Cutler, and Sidney Simon.  It was, and remains, an art school governed by artists, and has been an influential presence in the American art scene since its inception. 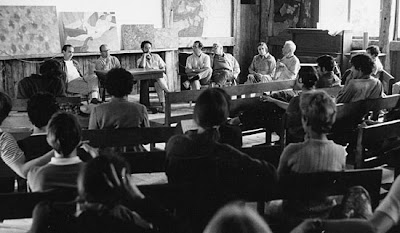 
In 1951,  Margaret Blake, a trustee of the Chicago Art Institute, who had been visiting the Skowhegan School, was driving on the back roads and came upon the Meeting House.  Moved by its shabby, untouched interior, she had the idea of a cooperative art project between the school and the church.  Working with the school, Mrs. Blake set up the 'Margaret Blake Fellowships For Decoration in True Fresco of the South Solon Meeting House'. A further statement was made that while there were to be no limitations in subject matter, the religious character of the non-sectarian building should be considered, and should have meaning for those whose worshiped there.  A national competition was held, and 11 artists were chosen.  The work was completed five years later, in 1956. 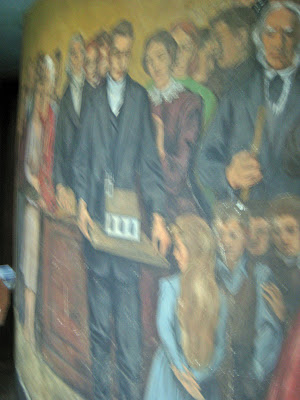 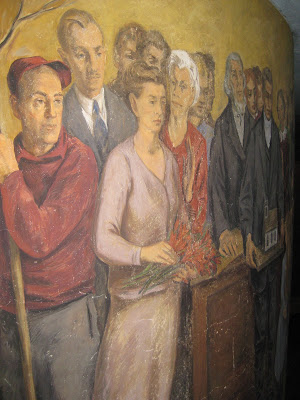 Frescoes on a convex wall in the narrow vestibule show the story of the meeting house, from original building to dedication of the paintings, with Mrs. Blake holding a bouquet of roses 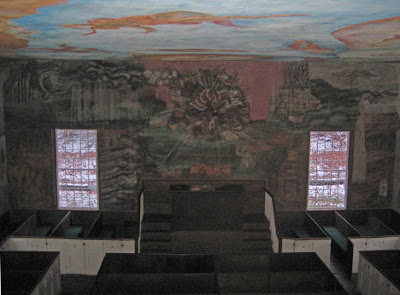 The wall behind the pulpit, by William King.  The ceiling fresco is by Edwin Brooks 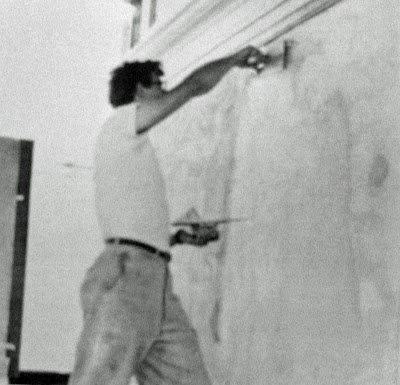 Sidney Hurwitz applying plaster to the wall for his fresco (Photograph by Paul Cordes, Down East Magazine Nov. 1957) 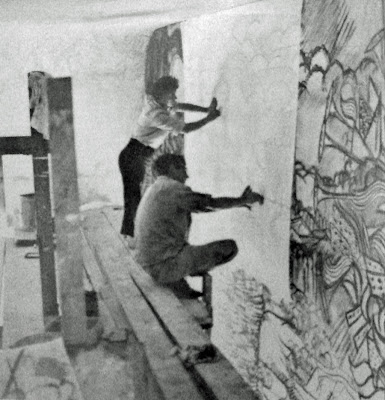 Michiline Beaumont and Philip Bornath transferring a design to the wall (Cordes, Down East( 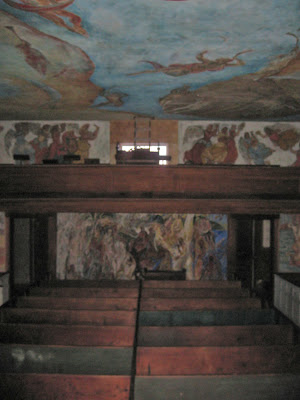 The curved wall at the rear depicts the Gospel of St. Mark, painted by Ashley Bryan
The choir loft above is the work of John Wallace, Judith Shuman and Sigmund Abeles
(Unfortunately, it was a gray afternoon just before dusk, and this wall defied either available light or flash) 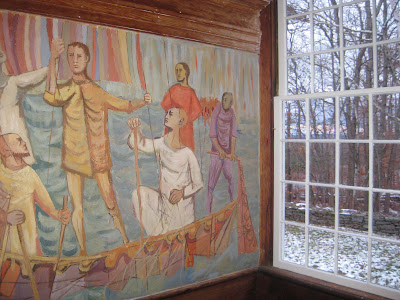 One of Sidney Hurwitz's frescoes, flanking the Bryan mural. 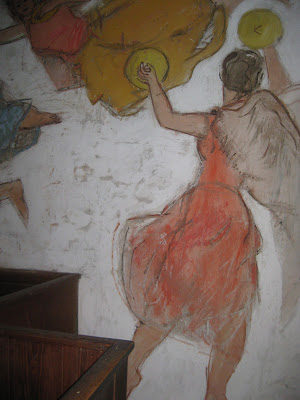 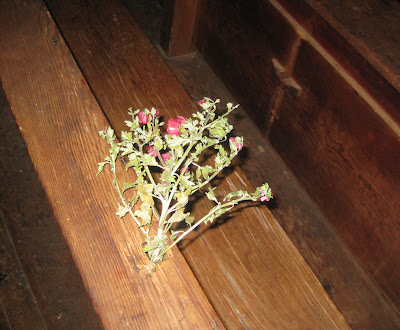 A sprig of scented geranium, mysteriously and touchingly attached to a bench in the choir loft 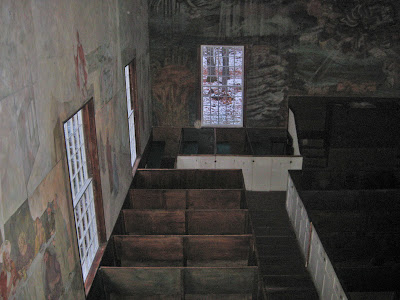 View from the choir loft.  The frescoes on the right, by Thomas Mikkelson, depict scenes from the New Testament 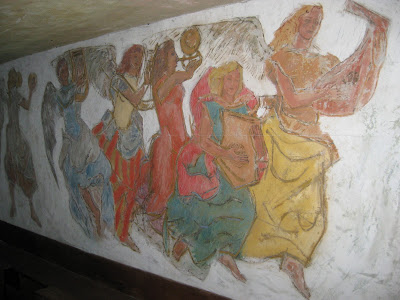 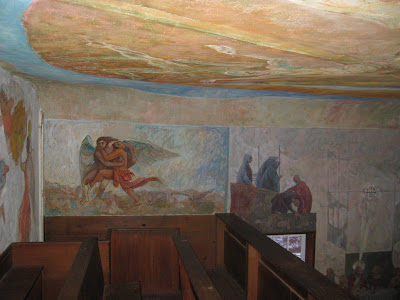 Another view of the Mikkelson mural 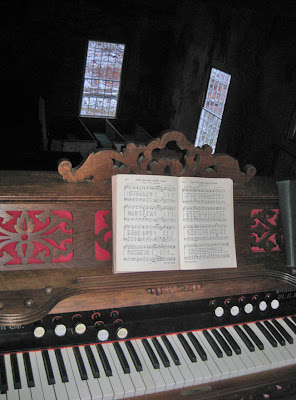 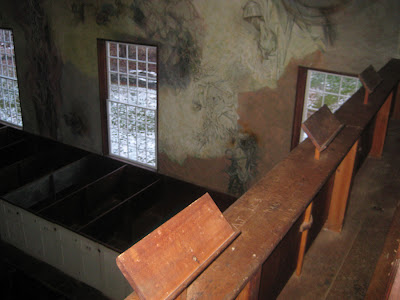 View from choir loft to fresco depicting the trials of Job and the story of Abraham and Isaac by Alfred Blaustein
In recent years, with the aid of grants, considerable funds have been expended on the conservation of the frescoes, now in the care of the South Solon Historical Society.  In 2007, a grant from the Maine Humanities Council supported the return of several of the artists, to discuss their work on the Meeting House. 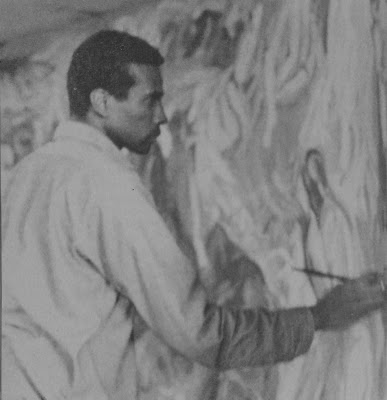 Ashley Bryan working on his fresco on the curved rear wall 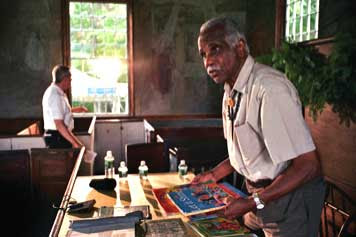 50 odd years later, Bryan returns to South Solon to discuss his part in the fresco project, and his subsequent career as an illustrator. (Garrett-Young photograph, Maine Humanities Council)
The South Solon Free Meeting House, never locked, is open year round.  Heat is not an option in cooler weather.
The Dilettante is indebted to an article by Lew Dietz, in Down East Magazine for Nov-Jan. 1957 for much of the information in this post.
Posted by The Down East Dilettante at 11:17 AM

Dilettante, thank you for this post. The murals are beautiful as is the meeting house itself. Near where I was born is (was?) a quaker meeting house, perhaps one of the earliest, and it too had the feeling of a place of contemplation.

That is quite possibly one of the most perfect buildings I have ever seen. Good things come to those who persevere (and to those who read their blogs).

So do you think the frescoes are inspired or a desecration?

Also, the ghosts were happy to have a visitor.

Thank you for sharing this. I find the way on how you've discovered it very interesting. I have been so interested with it that I'm planning to have it presented in class. I'd be glad to retold the story of this beautiful structure which I would be turning to a model using a portable CMM. Thanks again for sharing!

Ohhh. I can't find words....thank you will have to do....I'd not seen pew doors before, doors that open/close adding yet another detail to the monumental scale of this intimate chapel. DED, you do such fine work, you give us so many riches.

Oh that is amazing! I of course would wish they would all be somewhat more..related or connected but it's sort of charming and naive that each wall seems discordant -much like the original simplicity of the church itself. Or is that my imagination? Is it more a whole in person?

Flo, you are always too kind, and glad you keep stopping by.

Stefan, it is wonderful, and discordant and naive, and no, they don't make a better whole in person, but are amazing nevertheless

I always enjoy your diversions but really not sure what to make of these frescoes. They challenge my nostalgic desire for purity and simplicity in a building like this and I am often ambivalent about public art. It's looking a bit like I don't like them! But I would want to be in the meeting house before making a final judgment.

It's a curious dilemma to maintain a building...keeping it as the designers intended, or add some character (or quirk factor as I think of it in this case.) I wonder if its location (middle of nowhere) adds to our tolerance. I love the effect of the paintings in your photos...would dearly love to see this place. Thanks for a wonderful post!

What a wonderful, wonderful post. Thank you for all the research and hard work. So very interesting and beautiful all at the same time. Keep it up!

A post like this is why I am an avid follower of your blog. How can one read such a fascinating story if it weren't for your intrepid driving and research? What a thing to discover in such a rural location! So happy to read that it is being kept "alive" for future travelers to enjoy. Few things strike such wonder in the mind and heart these days. Thanks so much!

You were right DED. I love this story!