ANNALS OF TASTE: A Garage in Palm Beach.

Taste is always a tricky topic---subjective, and relative.  As regular readers know, it is a subject that endlessly fascinates me--when should one be wild, when should one leave well enough alone, when do you break the rules, when do you follow them?   Well, as I said, it's subjective.  Years ago, when I was misspending some of my misspent youth in Palm Beach, this was a house that I particularly admired.  While it might not give the Via Mizner competition, I thought it was one of the most interesting new houses on the island  I'm sorry now that I didn't take many more pictures when I had the opportunity.  I used .to be very restrained with my camera.  Unlike with my opinions.
The house is on an in-town lot, maybe three hundred feet from the ocean in the shadow of a giant condominium complex on South Ocean Blvd..  It flew in the face of the prevailing Palm Beach aesthetic of high show and pastel painted stucco.  It was original, and it was brave. 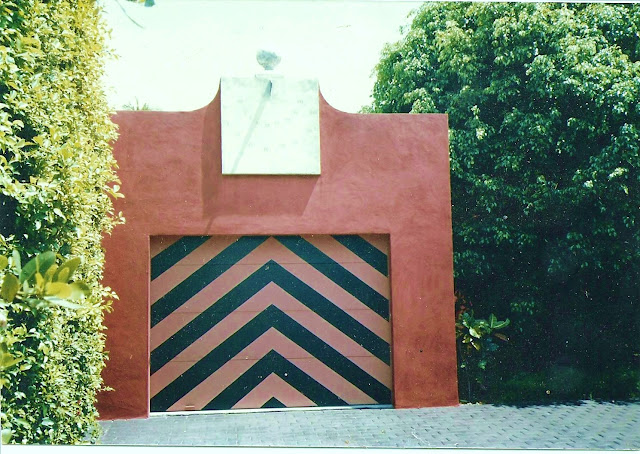 This garage is all one sees from the street---the smallish house is entered from the side, and runs shotgun to a living room and loggia overlooking a pool.  Although the design inspiration was Italian----mutual friends told me that the then owner had modeled this garage at the front of the house, with its orange and black chevron patterned door and sundial set in a pediment, after similar features on his villa in Italy.   The stucco, stained, not painted, a deeply pigmented red, was so right in the tropical light, and so rich of surface that it made a mockery of all its larger, more ambitious and more ordinary pastel neighbors.  Within the courtyard, one might as well have been in Tangier.
Nowadays the house has different owners.  The garage door is white, the tinted tucco a covered with flat lifeless coat of peaches and cream paint.   As happens so often, conventional and ordinary have won.  People are so afraid.

Posted by The Down East Dilettante at 8:02 PM

Amen...I built a house once in that very colour and the accent was a deep blue garage door. A week after selling the whole thing was painted condo beige!
Then happily the next owners brought it all back.

Oh, that is glorious.

Just to mess with our HOA, I'm going to submit this photo when we request exterior paint approval.

Oh I love that! Nothing is more boring than beige garage doors!

I just want to run up and hug those warm terra cotta red walls. Then I'd pull up a beach chair and settle in with a cold glass of Pinot Grigio. The whole thing just works. Like a Sol Lewitt wall drawing.

Oh, Dilletante, often you are so succinct - people are so afraid - words to live by. Though brought up in the cradle of Federalism/ Colonialism, if i had ever had the wherewithal to build something, it would have been more along the lines of Mercer Castle or some of the ferroconcrete, beer bottle and tile hippie things. screww the critics - full speed ahead.

I was struggling offline to figure out how to express that its greatness was a lesson in scale and proportion, blah blah, and then I read your post and thought, yes, "it just works." There's a pattern somewhere in the deconstruction that explains how and why it works, that's the stuff that fascinates me. I look at the garage door+pediment and realize the whole thing could be 8' or 14' or maybe even 20' tall.

When I first started the post, I tried writing an analysis, because in some ways, it shouldn't have worked...and it does things I normally hate---presenting a garage door as the front of the house, a little bit pastiche with the baroque gable, all that----but, in fact, it just works---so, I delete what I' started, and wrote the above instea.

it has color, texture, scale (you were about right at 14 feet, and it gives to the street..it just works...or rather, worked, as it is now beige and white, 25 years later...

Ok the red is fine but I gotta tell you the chevron door is most certainly not fine. Of course in my humble opinion.
Lynn from Decor Arts Now