As regular readers of this blog know, my aesthetic tastes are all over the map.  I'm easily seduced---the gentle New England charms of Hamilton House, A Marin watercolor, a Holbein portrait, the modern wonders of Fortune Rock, a Moroccan garden, a Franz Kline, a Murano candlestick---all call to me as surely as a siren song lures a sailor
No matter how diverse or worldly my taste has become, a little corner of my heart forever belongs to the world I knew and loved best growing up---the austere and optimistic elegance of Federal New England. 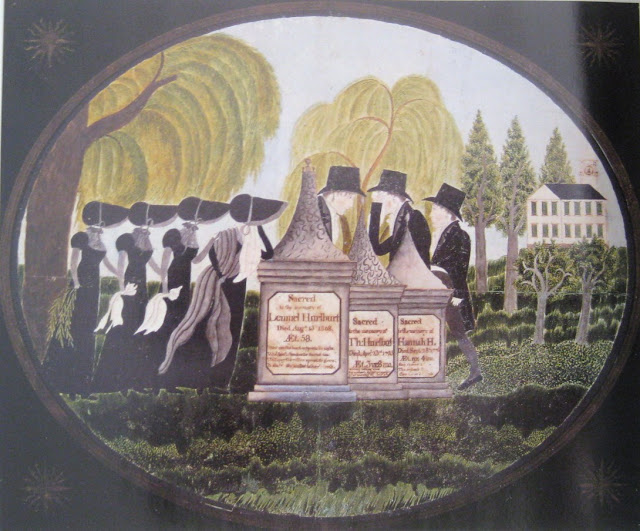 The watercolor above, The Hurlburt Family Mourning Piece, was painted in Connecticut in 1808 by Sarah Hurlburt, using techniques that she doubtless learned in a young ladies seminary.  I love the composition, with the strong shapes of the mourners in their hats and bonnets flanking the elegant monuments of departed relatives.  The palette of fresh green and black emphasizes the details---this is the style of early New England as I loved it.
The New England sensibility evoked by this painting aside, it is even more personal for me, as it  hung in my childhood bedroom.  Our parents encouraged my sister and me to choose paintings from their collection for our rooms.   My sister, as befitted a horse-mad adolescent girl, chose an early 20th century horse portrait, and two sporting prints that also featured horses.  These co-existed in her room with posters of Davy Jones and the Monkees, and a pen and ink drawing copied from Aubrey Beardsley, drawn by yours truly---but that's a different story.
My first choice was a Gilbert Gaul of two boys on a dock, very Eakins in composition and palette, a crisp painting utterly unlike the genre work for which Gaul is better known.  That request was denied, as it was my parent's favorite painting, and probably most valuable of their modest collection, and it remained where it was, at the far end of the living room.  But my mother more than cheerfully parted with the mourning picture, which had hung in the dining room, and a charming Barbizon school painting by Troyon---the usual rural French scene  with sheep and a church and sunset in the distance.   Yes, I was an odd child, with odd tastes, I admit it.  Not for me the usual posters of Cars and baseball players.   These joined a Beaux Arts style architectural drawing I'd bought with my allowance at an estate sale, and which still hangs in my sitting room 45 years later.
As for the mourning picture, it is an object lesson in how pieces travel through the marketplace  My parents bought it in 1964 from a noted Maine artist, Francis Hamabe.  He had acquired it a woman in Bangor who used it as partial payment for one of Hamabe's works.  How she happened to have it is lost to history.  When we owned it, it was frame dwith a modern white  mat.  I can still remember every detail of that picture---the crackled horse glue remaining on the border from a previous mat, with the ink signature of the artist visible underneath---and the texture and iridescence of the stippled dots of rich green gouache that delineated the rippling grass in the foreground
In 1973, I sold the picture, if memory serves me correctly, for $1800.00 .  It seemed a lot of money at the time.  Gosh knows what I did with the money---a car?  a trip to Europe?  Dinners out?  All of the above?  Probably.  You know what they say about a Dilettante and his money...
The painting was purchased by Calista Sterling, who was THE fashionable antiques dealer of our region in that era ( a position the Dilettante would later occupy in his turn in the 1990's).  She sold it in time to Joe and Hazel Marcus, retired textile manufacturers, collectors of Americana, who in their retirement ran a well known business called The Ebenezer Alden House.  Then the trail runs cold for awhile, until 1987, when to my great surprise, I opened  the new issue Architectural Digest (I still subscribed in those days), and in an article about American Folk Art, was the Hurlburt Memorial.  it was in possession of David Schorsh, a dealer both famous and notorious.The simple white mat was gone, replaced by an appropriate and fancy black and gold eglomise mat.  It was interesting to see it pictured there, and of course caused a pang of regret, for the $1800 dollars was long gone in support of youthful extravagance, and now the painting was worth far more.  I closed the magazine, and didn't think of the painting again, until for some reason it crossed my mind the other day.
I typed 'Hurlburt Memorial' into Google, and to my surprise, there it was, now in the collection of the Museum of American Folk Art in New York, and considered perhaps the finest of its genre.  Exhibited earlier this year in the exhibit, WOMEN ONLY: FOLK ART BY FEMALE HANDS, the catalog notes tell the rest of the story:

Young women of the upper classes received art instruction at such schools as Sarah Pierce's Female Academy in Litchfield, Conn. There, they learned to do watercolor landscapes in the fashionable pastoral style. This gentle view of nature was extended into another popular form of the early 19th century – the memorial painting. These employed various symbols of death and mourning, including the weeping willow and the obelisk, from Egyptian art. You can see more Egyptian influence in the 1808 memorial work by Sarah Hurlburt, with its four bonneted women lined up in nearly identical flat profiles.
Posted by The Down East Dilettante at 9:37 AM

Oh what a fascinating tale you weave, as always! Yes, I was a strange child myself (shocker, no?) and spent my allowance at garage sales and flea markets on antique vases and silver serving pieces (and old architectural digests) which I had piled in my bedroom. Strangely enough, I was embaressed of my loot and parted with it all right before college which I now regret!

Great story, as usual, in a great blog. Thank you. Barbara

Magnificent, you AND the painting. I marvel at the colors, how the horizontally terraced landscape resembles a rich tapestry, wonderful hats and shoes, how did she pack in so much pathos I wonder. Wondering too about the sprigs of rosemary [kidding] carried by the female at left, loving how the vertical lines of the bonnet ties continue down the fronts of all the dresses, and underneath the shoes, makes the ladies look like they're levitating.

The piece is spectacular, especially given its early date.

But, that's all part of being an esthete, living with an object of beauty and passing the object along to the next care taker to be enjoyed. There is always another object to take its place and then too pass along. It's an addiction really.

It is a thrill though, to sell an object, see it published on 1stdibs.com buy a prominent Madison Avenue dealer and then in a published home in a high end shelter magazine. HA!! If the current owners only knew.....

What a lovely ending for the moment for this painting!
A wonderful story.

Isn't that why we never stop. another ripping tale, investigative I have to say. I do love the ghostly handkerchiefs the mourners carried, not to mention the fur stole. all crying out "Edward Gorey"

I love and collect mourning at. This is a lovely piece with a fascinating story. Great post!

Love the tale and the art. Looks like a country version of the opening of Masterpiece Theatre. Glad the exhibit will feature works of women. Hopefully with names. As Virginia Wolfe opined, if it says it's by anonymous, it's usually by a woman.

ps I spent my father's collection of silver dollars not knowing they were more valuable than just enough to buy a magazine or a cheery lime freeze and peanut butter crackers at the drugstore. He said his silver collection helped the druggist send his kids to college!

Sadly, up to this point in my life I have only seen the "fill in the blanks" template mourning images from the 1840s on, so this image is literally eye-opening for me. Thanks so much. You can't regret parting with it: you unleashed it upon the world! And of course it's all about Federal.

there you go again contributing to my vocabulary. you always use some esoteric word i have to look up - eglomise - but now i can look at one of those iconic mirrors with the painting above and say in a voice loud enough to draw attention "what a great example of xxxxxx."
she knew her perspective too sometimes not too well portrayed in folk paintings.
as we were the reliquary of all things ancestral in my house, my bedroom displayed a huge steel engraved picture of a famous race horse - "Mr Amos" which i bought at an auction for 25 cents and which one of my deadbeat tenants spirited away.
the local auctioneer always told me never to have "sellers regret" as long as i made money on the deal.

security word def - "inflaosh" - a contraction referring to the price paid by the Museum of Folk Art for the painting formerly owned by our own little Dilletante.

what a great history for a magnificent little gorey-esque painting. nice to know it found a good home.

Hello.
Given your wonderfully eclectic aesthetic, perhaps you might have some little interest in what I'm up to, here: manuscript-americana.tumblr.com

So lovely to see your blog with its civility and manners and appealing posts. Thanks for the work that you do.
Peter
Upstate New York on a farm west of Albany

You should be patting yourself on the back!