INTERMISSION: "Apart From That Mr. Dilettante, How Did You Enjoy the Winter?"

Our summer visitors sometimes ask us How Do We Survive Up Here All Winter.  I remember that a long departed friend, having been asked The Question one too many times, once sweetly replied "Why by talking about all of you, of course, what else is there to do?".  Others returning for the summer will ask, with nothing but kind, innocent, good intentions: "How was your winter?"  Asking a Mainer how the winter was is like asking Mrs. Lincoln how she enjoyed the play.  Usually one grits one's teeth and answers 'just fine, how was yours?'.  By 4th of July weekend, with winter long gone (well, a few weeks gone, anyway) one chafes: "How the Hell do you think it was? It's f---ng Maine---it was long, it was cold, it was dark at 3:30! If you really cared how our winter was, you'd have sent plane tickets or at least, some gin." By early August, one doesn't even try to remember they're only being polite: "How was my winter?  Really?  Is that the best you've got? Call me up and ask me in March. I'll tell you how my winter was..."
Last winter, we were spoiled.  Very very spoiled.  We were given a glimpse of another world.  The one that has Spring. The storms and deep chills that overtook much of the rest of the country last year blew out to sea before they hit here, and we had the shortest and mildest winter in memory, and the earliest and truest spring we've ever seen----we might as well have been in Virginia. Our hearts were full of sunshine and love for mankind.  Really.  It was just like a technicolor Disney movie, with happy citizens tossing Bean boots and down parkas aside and happy little forest critters waking up and dancing with them in the streets.  Just like that.
But, the Calvinist spirit of retribution beats deep in the hearts of true Mainers.  It's a spartan place, and we know that we'll be punished if things get too good----and this winter was ample proof that we're right.   Nearly nine feet of snow fell, and it fell often--at any given time, two to four of those feet remained on the ground. Old timers who never complain were complaining loudly.  Souls and tempers were frayed. Temperatures stayed below freezing, heating oil stayed above $3.50 a gallon, plans were made an just as quickly  canceled as the next storm moved, and well, as you can tell it was just more fun than a trip to St. Kitt in February.  Thanks for asking.
So why do we stay here?  Better not ask me right now, with freezing rain predicted for Thursday---but part of the answer can be seen in the photos of my friend Sidekick's very beautiful shrub and flower gardens, a glimpse which in the pictures below.  Maybe another day I'll post a few of sailboats on the bay in August, and the question will be answered.
On the flip side, the Maine coast is superior gardening country, so for those few brief weeks of summer, we enjoy a floral abundance that temporarily makes up for the rest.  In summer, only a very cold and dry martini will lure my friend Sidekick out of her garden, seen above in late July, and below in late May-early June.  It is her firm belief that when it comes to flowers and shrubs, more IS more.  Based on the evidence, I firmly believe she is correct. 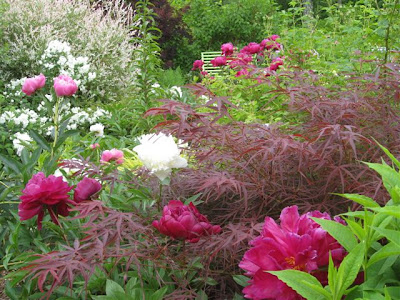 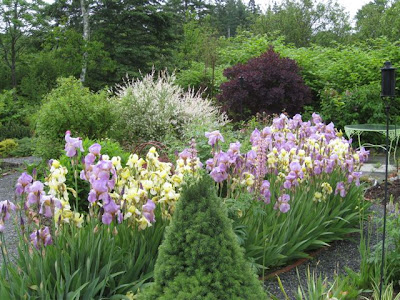 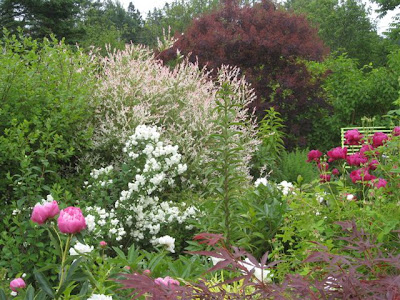 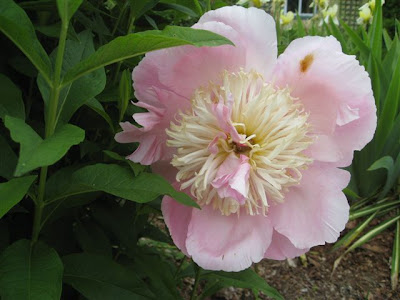 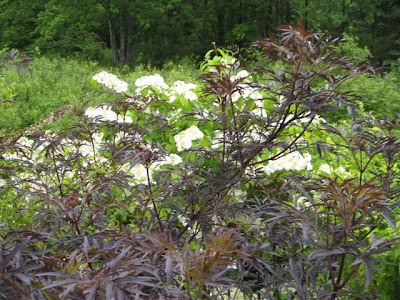 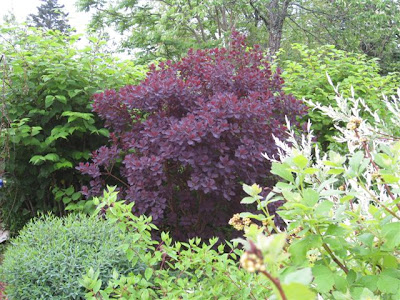 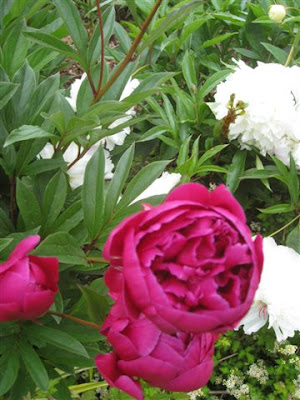 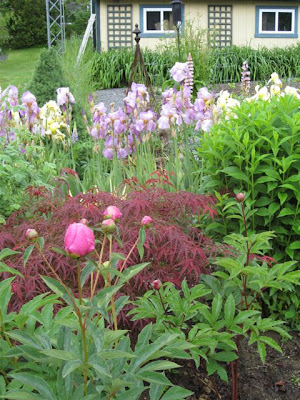 Posted by The Down East Dilettante at 10:52 AM

What a gorgeous garden! You answered my question 'why do you stay' with them. Love the last shot of the iris, spring is on its way here and I bought a bouquet of Iris yesterday at the grocery store.

Buck up DED. In a few short months you will be picking masses of glorious flowers and enjoying the cool Maine breezes while I will be battling blackspot, mold, water restrictions, 80% humidity and Long Island Expressway traffic.

And, by the way, AD, I love iris' too. I think they have the most wonderful, ellusive fragrance that is like nothing else, and their colors are astonishing. I use them as cut flowers as well, although twisting off the dying flowers tends to stain the fingers almost indelibly. it's worth it though.

Thought of you today after seeing this tweet...
TheOnion The Onion
by smilla4tweets
Nation Savoring Every Moment Of Glorious Late-February, Early-March Days http://onion.com/eaULnl

It's gorgeous. Really gorgeous. Not sure I have the winters in my, but the summer is amazing.

Just dug out from 24 inches here, so I sympathize. I find it hard to believe bloggers who are writing about spring buds already. I keep trying to think that snow does better things for plants than rain. Very funny post and Sidekick's garden is a dream garden.

The Tulip Poplars and Cherry Trees have bloomed down here in Atlanta. It seemed like it happened overnight and it was much appreciated. It seems they are more beautiful than ever. So it will be coming your way before you know it.......down east that is....

Maybe in that Maine nannosecond where snow melts and gardens are profuse with beauty, you'll do a tour for us of Sidekick's Garden. WOW! WOW! WOW!

and maybe those that queried would like to have spent monday night at my house after a half ton branch cut my power off monday morning. that branch had ice an inch thick on it and many more branches crashed to the ground all day long. from the top of my hill, all you could see was ice covered trees in every direction but typical of Maine, if i drove down to RT 4, no ice just rain. monday night the temp dropped to 8 degrees F and it was 25 degrees in my house. if finally got the power back on at about 3PM on wedenesday altho there is still one loop of convectors that must still have ice in them. on the other hand, the view of mt washington and the presidentials from my west window today was spectacular and i finally shovelled a path to my farthest shed - a place i haven't been to since mid January since there was no place left to put the snow. and the drifts between me and the next house north are down to about 8 feet deep (from a high of 11 feet). how f***ing springlike.

Security word def - "phinonit" - the next album by a well known new hampshire jam band. the songs will be mostly about phish.

Before February was done, we had the first signs of spring and they seemed to arrive earlier than in the past. As mentioned above, by another commentator, pear trees are in bloom, the tulip magnolias are stunning and the cherries are just on the point of bursting into a frenzy. As I spend more time walking, I notice that the winter bedding, the damned pansies, smell pretty bad.

When we lived in Europe, except for the years when it was so cold the canals in Amsterdam froze - ice thick enough for skating - there was little snow, just constant, endless rain, week after week month after month.

This year we had snow overnight and it closed the city down for days on end.

The photos of the garden are just beautiful.

Re: summer people and Maine winter

God bless them; they don't get it and they never will.

Sign on the Hull's Cove General Store a few years back:

Summer people, some are not.

Your friend's garden is SUBLIME.

Oddly enough, Denver has had next to no snow this winter. It was 65 and sunny here today.

Ok I will never ask about your winter bit those follows are gorgeous!
Lynn from Decor Arts Now