i wonder why 'Mizzentop', a grand Bar Harbor summer cottage built in 1883 for Louisa Hunt, widow of artist William Hunt, was not designed by her brother-in-law, Richard Morris Hunt, but rather by H.L. Putnam of Boston.
There is much more to write about Mizzentop, which went on to have a distinguished list of tenants and owners, and when I do, I will tie it to the invention of the reaper, to one of the finest metalworkers of the early 1900's, the Titanic,  the decorating firm of Sills and Huniford (no, they did not do interiors of this house, which burned before they were born), and even the TV show Law & Order, but not right now.  I was just wondering out loud for the moment.  I wish I were closer to the AIA Library, which houses the Hunt papers.   One would love to imagine that maybe there is a letter from Hunt to his sister-in-law, regretting that he was unable to take time off from the Vanderbilts, but recommending Mr. Putnam.  More likely however, Mr. Putnam was part of Mrs. Hunt's social circle in Boston.
Another curiousity is that there is a little cottage in Bar Harbor, know as 'Mizzentop Cottage'.  It is claimed to be the laundry cottage of Mizzentop, moved from the site to an intown location and converted to residential use in the 1930s.  Yet, it is almost identical to the laundry cottage at 'Blair Eyrie', further up the hill from Mizzentop, and in a 1940s real estate ad, the laundry building at Mizzentop is still listed as on site and containing six additional staff bedrooms.  As it happens, 'Blair Eyrie' was demolished in, you guessed it, the 1930s, and its laundry house was trucked off to a new location.  Research is a constant struggle to separate truth and conflicting, often romantic or apocryphal fiction.  Which is why real estate brokers are able to sell so many houses designed by Stanford White years after his death, and why so many families own sideboards made in the 1830s, but with a firm family story of having been given to an ancestor by George Washington, despite his having died years before.
Blair Eyrie was built at the highest elevation of any cottage in Bar Harbor, with 360 degree views, and never was a laundry building more prettily situated.  Below are the stairs that led to garden level from the laundry cottage.  Picturesque though these steps are, one does not envy the laundry staff making the trek from the house, down the service drive at left, and then down these steps with full baskets of laundry. 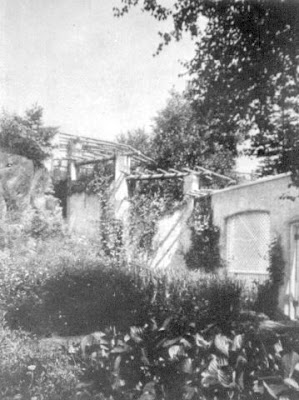 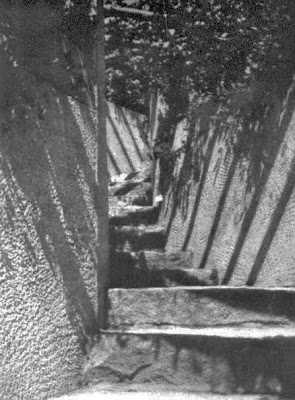 Posted by The Down East Dilettante at 12:49 PM

Hello:
This is all most intriguing and, although far from Central Europe where we are,it is easy to understand your fascination,and that of others, in this vanished house. Indeed, it is only in the latter part of the C20, and now into the C21, that there is at last widespread concern at how much of our architectural heritage has been lost.
We shall look forward to your continuation of this saga.

I salute your inquisitive mind and sharp eyes, and look forward for the rest of the story!

I can't wait to read more about Mizzentop. Your house postings are always my faves, and I find these enormous summer cottages endlessly fascinating.

p.s.
Pssssssst, DED, I think you may have made a little booboo within your very first sentence of this entry.

I was so busy looking for a grammatical booboo that I missed the actual booboo. Thanks for calling it to my attention. The Dilettante's fact checking department is not as well staffed as that of the New York Times. Which reminds me of the time that the FBI and the NYT fact checking department called me within five minutes of each other...but that'a another story for another day...

Don't you have siblings? Right off the top of my head I can think of a number of reasons why the brother-in-law potentially wasn't hired!

I am transcribing letters from a friend of Mildred McCormick's ~1907-09. My daily letter writer's correspondence was preserved 1904-32. Her stories of trooping to Mizzentop with Mildred in this period are intriguing. Have you pictures of the period to share beyond those posted?

Debra, this just caught up with me, and unfortunately, I do not have an email address to reply to. But here goes: Mizzentop is a very frustrating house to trace—very few images seem to have survived, even in the McCormick family. Email me and I may be able to give you a few more leads.

We enjoy reading your grand blog and to support the wonderfulness of it must note that Mizzentop's architect was John Pickering Putnam Jr. (1847-1917), contrary to almost every written account. We have the same article from Building magazine that you have and, if you look very closely at the drawings, you will see that they credit J.P. Putnam as architect. We searched high and low for H.L. Putnam as you seem to have, and could never find a trace of him as an architect. John Pickering Putnam, on the other hand, was well known.
Charlotte R. Morrill
Archivist, Southwest Harbor Public Library