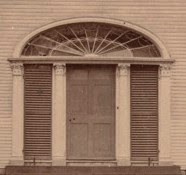 Thanks to the intrepid Flo, yesterday's beautiful mystery house (click here) is a mystery no longer.  The handsome house was built in Roxbury, near what is now the intersection of Washington St. and Blue Hill Avenue, around 1800 by one Thomas Kilby Jones, a prosperous merchant, as seen in the 19th century engraving below.  It was demolished in 1898, as the tide of development overtook the neighborhood, which had become 'Grove Hall' which had been the name of the estate.  General Dearborn never had anything to do with the house, and it is apparently just one of those labeling errors.  Any study of history is a search for the truth, often obscured below many layers of urban legend.

The embarrassing part?  I had gotten as far as the first page of the website that Flo found, and failed to click the link that would have taken me to the place of enlightenment.
The house had a checkered history, related here in an excerpt from http://www.gettingtotheroots.org/grove_hall_history:

"The Grove Hall estate and mansion stood at this crossroads for nearly a century from 1800 to 1898, although it served many different purposes over the years. The original owner, Thomas Kilby Jones, was “a prominent merchant and auctioneer of Boston and a gentleman of liberal hospitality.”15 He joined the First Church of Roxbury in 1804 and was a trustee of the Roxbury Latin School.16 In 1832 the original Grove Hall mansion was enlarged and became a hotel and summer boarding house resort. By 1837 it was owned by Edward D. Clarke and managed by C. A. Flagg. Bowen’s 1838 travel guide describes it as “a delightful resort for private parties, having every accommodation for their recreation and amusement.”17 The estate was converted into the American Orthopedic Institute in the 1840s by Dr. Alanson Abbe. The institute treated various medical conditions (curvature of the spine, paralysis of the limbs, club feet, etc.) and offered several regular school courses so young people could continue their studies."

And there you have it.  Thanks Flo.  My best regards to Frederic March.  But now I have more questions:  What sort of space did that pavilion at the top of the house hold?  A study?  The nursery?  An observation room?  Maybe even, as sometime happened, a ballroom?  Or was it merely attic behind that ambitious facade? 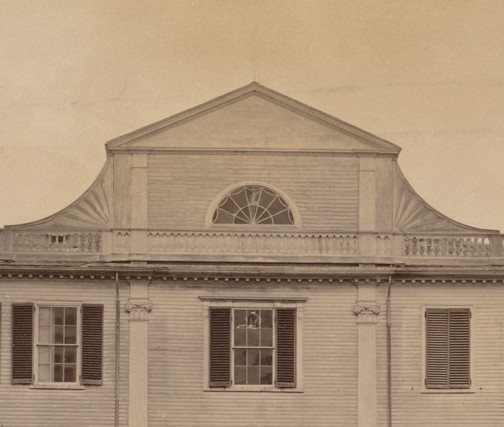 Posted by The Down East Dilettante at 3:08 PM

"And what of its amazing design? What early designer had created this? One of the many talented carpenter builders? One of the early and rare architects, like Charles Bulfinch? Had its design come from a pattern book?"

See? Your original questions haven't even been answered, DED. I must return the prize and soldier on.

I have a bottomless appetite for historical sleuthing of this type--way better than even the best mystery/whodunnit plots.

And like Flo, I long to ID the designer.

"What sort of space did that pavilion at the top of the house hold? A study? The nursery? An observation room? Maybe even, as sometime happened, a ballroom? Or was it merely attic behind that ambitious facade?"

Professor, thou doth bring me to my aching knees. Oh how I wish I could find a set of plans. Eyeballing says ceilings are too low up there for grand purposes; and the heat, oy. But.

Map the Grove Hall intersection, and you see the estate isn't that far from Quincy Bay/Massachusetts Bay. So was the upper portion of the corps de logis meant to catch seabreezes? Was there a plan to catch and circulate breezes downward?

Jeopardy is on, I shall return.

Most every owner of an old stately home in Memphis claims his marginally finished attic was a ballroom despite the abundance of gracious entertaining spaces on the ground floor. Here, such spaces were usually a winter playroom for children as servants did not customarily live in the main house. But if there were a view and sea breezes, it might be a different story (although headroom has to be considered).

I bet you anything that was simply an attic; a large window to let light in and provide a presence to the facade. Can't wait to hear what you find out though!

"I bet you anything that was simply an attic..."

I bet you're right. I dug into the history of the area pre- and ca 1800 and found a bunch of really interesting stuff, a canal being dug, a railroad coming etc. I loved the idea of an overlook up there, a captain's walk of sorts so the owner could keep watch for vigilantes, or supplies coming by buckboard, as far as the Bay. But I think you're right.

My brothers and I just liberated an opposing set of half-round attic windows from our 100 year old-growing-up-house; at one end was a pair of quarter rounds, at the other was a single half. For show, for aesthetics according to the times. Glad I could liberate them prior to demo.

"I had gotten as far as the first page of the website, and failed to click the link that would have taken me to the place of enlightenment."

That's because you were STARVING. Moral: never search on an empty stomach.

What a great followup and shows the merit of going with the Flo. Hope this conversation has removed all of the vestiges of that harrowing winter illness you suffered: Maine-in-ghites

Pondering if Mr. Thomas Kilby Smith might have been inside the elegant, new, nearby house of Mr. James Swan, gasped at the interior dome, issued directions to his draftsmen that he too wanted an elegant double-height second floor, hence this marvelous and mysterious confection on top of his house.

Something else nagging at me is DED says Mrs. Perez Morton [another neighbor in another new trophy house] was a cousin to Charles Bulfinch. Well, Mrs. Thomas Kilby Jones' maiden name was Morton. I will dive later into those possibilities, but a blood line connecting Grove Hall to Bulfinch might explain a thing or two.

Hmmm, that is most interesting. I've searched all the Bulfinch books for reference to Thomas Kilby Jones, and come up empty.

Actually, I misspoke---it was Mrs. Bulfinch and Mrs. Morton who were cousins---but yes, that seems a plausible lead.

As for the monitor on the roof---it is a tradional palladian inspired design motif, and traces through the pattern books. These monitors took many forms---at the Perez Morton house, it was in the center of the roof, and was an octagonal room used as a study. On the Maine house of General Henry Knox, a friend of Mrs. Swan, it lit the entire stair hall---a contemporary account of visiting the magnificent house mentions the icy draft created by this impressive feature (future post)

And here for the neighborhood long after the house had vanished:

I keep loggin on to this post just to keep looking at these photos, gosh I love this house. And the history.

Thanks DED. Going to look up "monitor" now.

Devoted, agree, for every actualy 3rd floor ballroom in an old mansion, there are 200 big finished attics that the owners wish were.

Anonymous, I cannot get enough of old house mystery and research either. Turns out that this one was hiding in plain sight, but until the photo surfaced, it never caught my attention.

AD, I'm sure you're right

Flo, with you all the way. It turns out that I've seen a couple of 19th century engravings of it before, but it just never registered until this stunning photo crossed my path. I've been long familiar with its doppelganger in Kennebunk, but that one, though lovely in details, lacks the proportion and presence of this one. The Federal houses of this era, especially these that have some ambition, always fascinate me.

Glad I found your blog. I too have a fondness for Federal houses, especially of the south such as my own. I'll enjoy catching up on your postings...

What a wonderful house, and previously unknown to me. I happened across your blog in looking for Bulfinch's Swan house. (I'm at the office, and my copy of Kirker is at home.) Can't wait to read more of your posts.

I was delighted to find your blog and the engraving of the Grove Hall mansion. It was the home of Thomas Morton Jones in his youth, a close business associate of my husband's g g grandfather here in Birmingham, England. All I now know, is that TMJ was a son of Thomas Kilby Jones, and I would be interested to learn more about his ancestry. TMJ travelled in Europe as a young man and spent about a year in Russia in 1810/11 where he socialised with John Quincy Adams. This friendship continued until at least 1816 when JQA was in London, England. Were the families related? TMJ died here in 1857, unfortunately in much reduced circumstances. Sue Darby