Moving one's house has always been a popular pasttime in New England.  Since the earliest days, buildings have been on the move, by land, by sea, by oxen or truck, whole or in parts.  My own house, a cape built in 1814 was replaced when the family who owned it achieved a modest prosperity in the late 19th century and built a new larger house designed by William Ralph Emerson.  Rather than demolish the existing house, where the owner's wife had grown up, they lifted it from its foundations, put it on greased logs, and then moved it across fields to its present location. 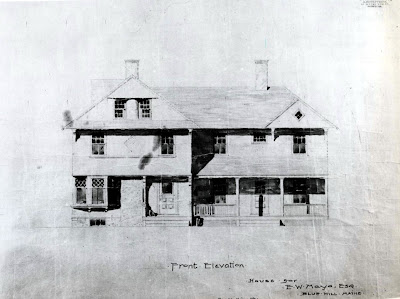 In the neighboring town of Castine, Tory loyalists, not wishing to live in the new United States after the Revolution, took their houses apart, and transported them by boat to Saint Andrews New Brunswick, where they were re-erected, and their owners remained subjects of King George.   Elsewhere in our town is a house built in Ellsworth, 15 miles away, in 1796.  When threatened with demolition, it was purchased by a decorator who borrowed a barge from the St. Regis Paper Company (''fortunately, our family had stock in the company'') and floated it to her parent's summer estate here.  And, in a post last year, I told the tale of Spite House, a Federal Mansion that took an 80 mile trip by sea from its original site in Phippsburg Maine (click HERE).
After writing last week about "La Rochelle" a grand old summer cottage at Bar Harbor, I was reminded of another traveling house  (Click HERE for the previous post).

One of the fascinating things, to me, about fashionable summer resorts is how the desire to be near society trumped the need for a little elbow room, and how the variety of architectural styles, sit cheek by jowl on lots often as small as those in the city, making strange bedfellows in their architectural cacophony.  West Street in Bar Harbor was no exception.  The first house on the street was La  Rochelle in all its French Renaissance glory.  Its nearest neighbor, the summer cottage of Kentucky poet George Douglass Sherley was a log and stone lodge on a mere half acre of shorefront, and so it went down the street, as one passed shingle style, colonial revival, and Eastlake Victorian cottages by some of the most important architects of late 19th century America.
The Sherley cottage was built and designed by a local carpenter to Mr. Sherley's specifications sometime after 1900.  When Mr. Sherley decided to give up Bar Harbor in 1912, he sold the land to his  neighbor, Mr. Bowdoin of La Rochelle, who desired a larger lawn.   The house, however, wasn't included in the sale.  Mr. Sherley instead had the place dismantled, as if it were a giant Lincoln Log kit, and had the whole shipped back to Lexington, where he had it re-erected.  And of course, I'd love to know if it still exists.  I once saw a picture taken in the 1950's at its later location, but there the trail grows cold.
Posted by The Down East Dilettante at 10:05 PM

What don't you know about Maine architecture and interiors?

I'm grateful for this postscript as well as for your earlier post on the "Spite House" as I'm putting together a post on houses that have been moved in Salem for later this week. It's taken me some time to put it together because there were so many! Another great example of Yankee thrift.

Of course the practice continues unabated. A few years ago a friend's grandmother moved an 18th century Vermont farmhouse to a nice spot on the sea in Nantucket, after searching for years and finding nothing that suited her exacting standards already on the island. By all accounts the thing was quite charming. They didn't stay long, however, as the constant rattling of the shutters in the breeze drove said grandmother crazy, and I don't think they lasted more than a season or two.

I'm sure it will all be lost to the ages as the waters rise, but how strange and frivolous we will seem to future generations -- not to mention impossible to trace. Considering how much we move things around, future archeologists will have quite a time of it.

When the archeologists of the Nigerian Empire of 5000 AD scrape down to the levels of this primitive state of humanity, I doubt they will discriminate much between us and everything else for a thousand years on either side.

(Perhaps Manhattan will pass for some degenerate version of Göbekli Tepe, with Swifty's as a portal to the underworld.)

It makes perfect sense to me. . . why let a good thing go to waste. The Ancient makes a great point! In 3000 years, I think it not such a bad thing to be a bit of a puzzle.

The house is neat [as we geezers used to say]. You ain't kidding about a cold trail. How could something like this have slipped below radar? The photo taken in the 50s, did it for sure specify Lexington? I even cruised through Louisville just in case there was an editorial L-word lapse, nada.

Hi
Its a nice piece of information.Generally people face lot of problems while shifting their home or office. Its really a difficult task.For all those who hate wasting time in shifting, man and van is for you.They provide you man and van services for shifting in all over UK.

This is interesting information. Great for architecture enthusiasts. Anyway, thanks for sharing this with us. May you have a great day ahead.

The final end of the Sherley house (renamed Birch Nest) is truly sad:

This is a Nice inspiring article. I am pretty much pleased with your good work.You posted really very helpful information... thank you. packers and movers Bangalore marathahalli

A really great article it's got great information for everyone that needs it. keep posting great staff.