Asher Benjamin Down East: A Doorway

Until the practice of architecture became a widespread profession after the 1840's, carpenter/builders, using pattern books, most prominently those of Asher Benjamin, were responsible for most of the graceful classically inspired buildings that one sees in New England villages.   One of those carpenter/builders was the prolific Thomas Lord of Blue Hill (1806 - 1880), who can be fairly said to have taken the architecture of that area out of the Federal and into the Greek Revival, with the publication of Benjamin's 1833 volume, The Carpenter's Assistant. 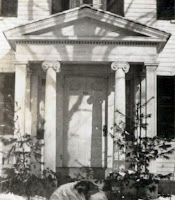 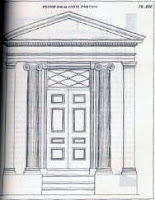 Lord's own house in Blue Hill, built in 1840, after he had achieved professional success, was was a showcase for his skills.  This is the lovely front door of his house, compared to the plate which inspired it in Benjamin's volume.
Posted by The Down East Dilettante at 9:40 AM

Fantastic post! I had never heard of Asher Benjamin, but am going to spend a little time this afternoon researching him!

Thomas Lord of Blue Hill (1806 - 1880)- do tell us more about said Tom Blue. His original nomenclature implies peerage, but now I think not.