The family antiques business has been going for 45 years, and I have been running it for 25 years now, a temporary gig until I figure out what I want to be when I grow up.  We've been in business long enough that we are beginning to see things we sold years ago coming back into the marketplace. 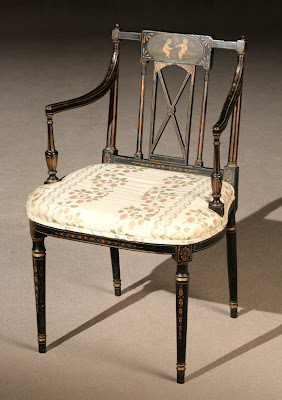 I discovered an old friend back on the market this evening as I was surfing the auction news over at the always entertaining Homer's Odd, Isn't He.  I realized with a frisson that the Weschler's auction that he was reviewing was  the estate of a beloved long time customer of our shop, a founder of the Washington Antiques Show who died last year at 103.  She was a marvelous woman who had  been a client of the fashionable decorator Mrs. Joseph Weller, who did many of Georgetown's best houses in the middle of the last century (and was the mother of another well-known decorator, Nancy Pierrepont).  The client had a marvelous eye, and the innate knack for placement that was so characteristic of certain ladies of that era.  I recognized a few things that I'd sold her, including this wonderful Regency chair with its swoon inducing painting of Turban clad figures sitting in a landscape,  I'd chased the chair for awhile.  It had been love from the moment I saw that delicious little painting on the back. The eight or nine of you who regularly visit this blog may even remember that I have a slight chair problem.  This one had belonged to friends who inherited it from their grandmother, who had owned a grand estate outside Albany (the chair can be seen in a photograph of the music room of that house in an article in Magazine Antiques, December 1967, should anyone care).
I remember the sale well.   I had brought the chair into the shop, absolutely delighted with it, and it was immediately spotted by my most tiresome customer, a surgeon's wife who summered in a nearby town whose collective denizens are considered by most of us in the pretty things business to be collectively the most annoying customers in the area.  Funny how different communities can take on different personalities.  At any rate, she put the chair on hold, as was her wont.  She then called too many times to beg a better price (for the record, the 1987 price was $325.00).  I turned a cold heart to her pleas, and she finally agreed to take it, but would not be in for several days to pay for it and pick it up (of course), blah blah blah, etc.  Then as was his wont, her husband--like his wife, a pain in the ass (in those gawd awful red trousers with a red gin nose to match)---told her she could absolutely not have the chair.  This was a typical transaction for this customer---hold, whine, renege.  Consider the foregoing to be the Dilettante's Dish on How NOT to be a Favored Customer.  Then, as this drama was winding to its inevitable tiresome conclusion, the favored customer came in, took one look at the chair, said she must have it, could I please put it in the car right now, and her man would bring the check by this afternoon.   And off it went, and the check was delivered by the faithful servant within the hour.  And now, here it is, 22 years later, back on the market.  Think, the dear lady was 81 when she bought it, still taking joy in the pursuit of beauty.  I'm tempted to call Weschler's and leave a bid.....I'm sentimental that way. 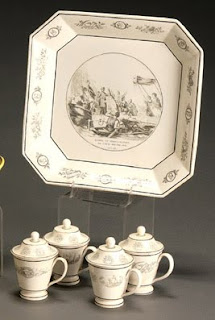 Also up at the sale is this Creil transfer ware tray and 4 matching pot de cremes.  I purchased them, along with many other pieces of Creil, my favorite china, at the estate sale of one Mary Meeker Cramer, a Chicago meat packing heiress, whose architect husband Ambrose had been an associate of the great David Adler.  The Cramers had just the sort of taste one would expect of associates of David Adler.  Stylish.  I'd love to see that sale come by again---but enough about the past.
The chair is not the only old item that I recognize going up at auction this week----a pair of swagged tables from the 30's, pictured in this post a few days ago, which I sold to another delightful customer a few years ago, are going up at Thomaston Place Auction Galleries this week.
Posted by The Down East Dilettante at 11:57 PM

I plan on attending this auction (my first one!) and there is a piece I have my eye on...i'll pay attention to these too -such a small world!

Hmmm, I look forward to your auction report. Hope whatever it is you spy joins your other stylish goods at your apartment.

And yes, hasn't the blogosphere reduced the world to the size of a pin?

What a forensic memory you have, and what a terrific story about the chair. The joy of the entire process.

Interesting to see objects circulate within dealers and auction houses. I occasionally recognize the same object, clearly identifiable by some aspect of it, moving from dealer to dealer. Boy and I recognized a pair of Regency chairs at the Winter Antiques Show that we saw at auction near us in the country only a month ago. Same upholstery, too. Not only to objects resurface, but their provenances change, too: we had dinner the other evening with friends who said that a pair of 19th century hall chairs that they sold at auction at Doyle apparently came up at auction in the mid-Atlantic last week identified 18th century chairs.

That chair is beautiful.
When I saw it, I did my happy dance.I can relate to that pain in the ass customer, had a few in my day. How fabulous to find it again.
Your story was fasinating. I miss all my Antique dealers in Florida. Do you know Thomaston Auctions??
Have you had dealings with him?
I have!!!!!!!!
yvonne

Columnist: My startling memory for details is alternately a curse and a blessing...sometimes it terrifies my friends, and yet, I often forget why I went into a room just two seconds before.

Reggie: Sometimes provenance changes because of new research and discoveries. More often it changes because the owner or dealer just can't help romanticizing and embellishing a history out of wishful thinking. And sometimes, sometimes, I regret to report it is just because the owner or dealer doesn't know enough, and will boldly say anything in the hope that they make it true, and they don't really know....and less often, but not never, the speaker is just plain dishonest. For myself, I've always preferred a policy of confidence in what I do know, and willingness to admit what I don't.

Yvonne: I'll email you about that question.

The blogosphere certainly does make six degrees of separation smaller all the time. Thanks for your comment over at my site. I love that chair too but love the Cane one more. Ahh, I wish this recession would end. But I plan to attend the auction just to watch.

As to that six degrees remark, I took my swimming lessons at Nancy Pierrepont's pool in NJ, along with her son Jay when we were youngsters. It was of course a long time ago. Cheer's Homer.

I am going to the preview with AD on sunday, and will think of you fondly.

Dilettante - I'm with you on the terrifying memory and walking by your side as you forget why you entered a room.

Lovely story and told with wit and wisdom. I once had a great steel trap of a memory. At 60, that is starting to be just a trap. The old grooves stay with us the longest, so I tell younger people to cram their minds with wonderful things because that's what they are going to be remembering in their dotage!

Janet: Awwww, wish I was going with you guys.

Blue: How we suffer for our art

Home Before: I'm about to be 57. You mean I only have 3 more years? Oh dear. I'll be a lot of fun at the nursing home, remembering only details of Adamesque columns, but nobody's name...

Many thanks for highlighting this.

(I bid on two things and got them both.)

((I bid by email, and almost certainly overbid. Blame the snow.))

Ancient, how delightful! I wonder if what you bought were among the 20 or so things I recognized as having come from moi!

I got your chair and a brass-bound wooden liquor box on a stand, and am very happy to have both.

I can't tell you how delighted I am to know the next installment in the story of the chair---and isn't the little painting on the back just the bee's knees?