In yesterday's post about Duck Creek, I mentioned that madness was setting in because I could not find my exterior photos of that lovely house, not yet digitized,  lost somewhere in paper form somewhere amidst the cluttered file drawers. 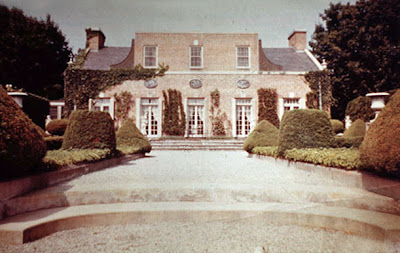 
Architect James Shearron, of Bories & Shearron, designers of elegant small houses themselves, heard my cry of pain, and kindly sent along a wonderful group of pictures from his own files, thus saving my sanity for another round of blogging. 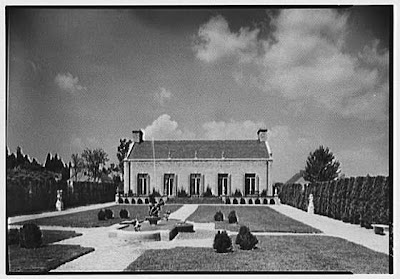 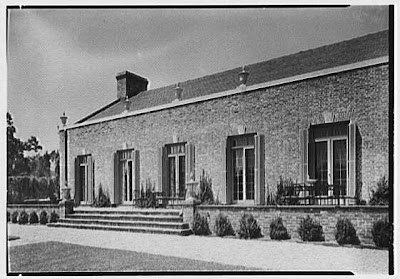 Two view of the garden front as originally built, spare and elegant

The pictures were also a revelation, for as much as I have admired Duck Creek, over the years, I did not know that the house had originally been  designed differently from its present center pavilion form.  The earlier form, elegant in idea, somewhat betrayed its origins as a salvaged post office, on the entrance front.  The garden front was long and restrained, elegantly punctuated by five French windows. Handsome urns were placed unusually and attractively on the parapet, above the windows themselves, rather than the more academic placing above the spaces between.   Addition of a central flat roofed dormer gave the house more the air of a folly or garden pavilion.  The three paterae above the central windows, a keystone above the central window only, and the brackets flanking and tying the dormer to the roof, are just the right amount of decoration in this perfectly scaled composition. The entrance front as originally built.  I'm afraid I must admit that in this view I have no trouble imagining cars parked diagonally in front as their owners pick up the mail.
There was one more surprise in the photos that Mr. Shearron sent:  Mr. Knudsen's own bedroom, completely leaving the 18th century behind for a modernist style.  Interestingly, in this particular case, the furnishings appear more dated than the 18th century artifacts that furnish the rest of the rooms. 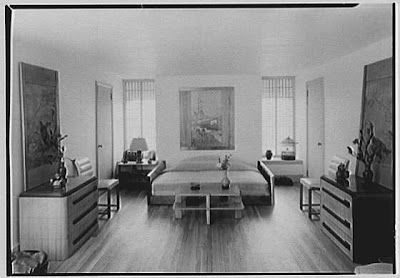 The master bedroom
I love many types of houses, from vernacular Maine farmhouses to graceful French chateaux to modernist glass boxes, but I have a special fondness for this type of house, relatively small, but designed with the the spacious intent of a larger house.  One sees it in all types of architecture---an elegant New England farmhouse, a story and a half high, yet with the Adamesque fan door of a mansion; a small French pavillion built around a central room with the airs of a large chateau; or Philip Johnson's perfect, elegant Glass House.  The would-be palace builders who cluttered up the landscape and suburbs over the last decade would have done well to heed the lessons of these small elegant mansions.  Duck Creek is perhaps not a masterpiece, but it is masterful. 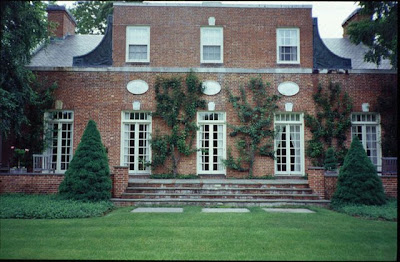 Posted by The Down East Dilettante at 9:31 AM

Ooh, that's a nice house. The elevation is indeed spare and elegant. I am so glad you got the
files.

What a great follow up- to your post. This is a lovely exterior-I can not imagine why the landscape continues to be cluttered with the would bes as you say.

I've long enjoyed your blog and your take on architecture. Thank-you.

I thought you might enjoy seeing the records I found at the Smithsonian about Duck Creek. Most are digitized and can be seen online, but a few you would need to request "old school".

Please continue with your great work.

I was lucky enough to go on a Sotheby's decorating tour of houses on Long Island; actually two! One on the "Gold Coast"; and one in the "Hamptons"! I will find the pictures.....this house was on one of them!

Charming inside and out! Peeking and searching for inside shots!