Even though the modern world has  caught up with us here in Down East Maine, and we mostly lead our lives in real time nowadays, some old ways die hard—place names are a prime example.  After all, until GPS came along to spoil the fun, this was a place where directions often started out "Go past where the old sawmill used to be, turn left..." 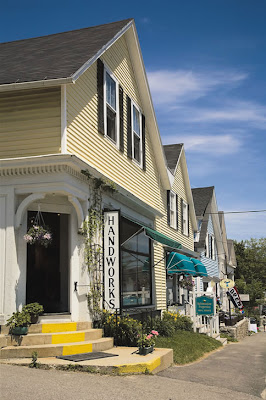 "Charlie Ware's"
For example, this building was formerly the  Blue Hill Department Store, which did business on Main St. for about 100 years.  In my childhood, it was owned by a man named Charles Ware, and was always referred to as ‘Charlie Ware’s” (as in “Mommy, can we go to Charlie Ware’s and buy a new toy?”).  For the last 20 years of its existence, it was owned by a woman named Ellen Werner, a great friend of mine.   Ellen was not unknown in the community— as a state legislator, a community activist, and the wife of the local obstetrician.   Nevertheless, throughout most of her ownership, she gracefully suffered her business being referred to as ‘Charlie Ware’s’.  And when modern times brought an end to the era of the small village dry-goods store, the question around town was ‘Have you heard that Charlie Ware’s has closed?’   And now, a few of us still refer to the place, for the last decade a crafts gallery, as ‘The Department Store'. 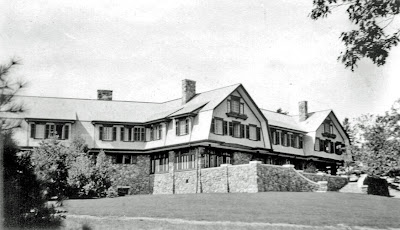 "The Haskell Cottage"
Above is Dundree, a summer cottage overlooking the entrance to the harbor.  It was built in 1913 for Cleveland industrialist Coburn Haskell, inventor of the modern golf ball, and his wife, Gertrude Hanna, a daughter of Cleveland’s wealthiest family.  The house was owned by the Haskells until Mrs. Haskell’s death in 1938.  It was then owned in succession by the Harry Gerhausers, the Merritt Taylors, and Katherine Filene Shouse, the department store heiress who gave Wolf Trap Center for the Performing Arts to the nation.  Kay Shouse was no slouch.  She held the Presidential Medal of Freedom, was a Dame Commander of the British Empire, and first woman chairman of the Federal Prison for Women board.  But even she was not prominent enough to dislodge the Haskell name from the house  (although the sight of her liveried chauffeur taking trash to the dump in cans lashed to the rear of a stately 1951 Jaguar Mark V Saloon was a summer tourist favorite.  Never has garbage traveled more elegantly to its destination).   The present owner’s parents bought the house in the late 1970′s, and hence the current family has owned it longer than any other, including the Haskells.   But yes, you guessed it, it is still referred to as the ‘Haskell Cottage’, even by those of us too young to remember the Haskells.


"Josie Barker's House"
My great grandmother’s cousin, Mrs. D. Chase Barker, lived in an old cape  on Pleasant Street in the village.   Josephine Barker, a pillar of the community,  was of that generation of ladies who revered their ancestors and the artifacts of the past, and the house was always on local house tours, where visitors would oooh and aahh over the warming pans by each fireplace, and the six foot cooking fireplace and brick bake ovens in the original kitchen. Mrs. Barker died in the mid-1960′s, and the house had two owners after that before being acquired in the 1980′s as the home of a terrific bookstore. The locals referred to the bookstore not by its name, Blue Hill Books, but as ‘the bookstore at Josie Barker’s’.   I remember well the day my grandmother rang me up in the bookstore’s third year of business and asked, “Would you stop at that bookstore at mother’s cousin Josie’s and pick up a copy of Roy Barrette’s new book for me?” 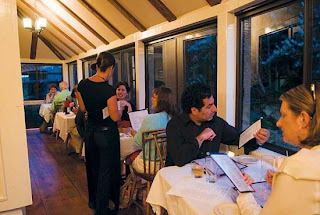 "The Forge"
The local blacksmith shop, next to the Mill Stream,  ceased operation in the late 1960′s, and the building became a charming restaurant known as The Firepond.   It has been a restaurant in many incarnations since—’Toscana (don’t ask), Firepond again, and most recently ‘Table: A Farmhouse Bistro’ (don’t get me started on that one!  I abhor such nomenclature.  Subtitled restaurants, indeed!).   And yes, you guessed it.  I still hear it referred to as ‘the forge’.
There are many other examples, several of which I will be posting about for their own colorful stories—this is just a random sampling.

…plus c’est la meme chose.
Posted by The Down East Dilettante at 10:11 PM

Thank you for the mini tour - it's almost like being there.

Blogger is treating you a bit better I hope.

In a slight variation on the theme, you omitted my favorite direction -- "Go to (name of nearby village) and turn left where the store used to be." An accurate and perfectly understood direction for anyone who has lived in our charming part of the world for at least 15 years.
Currently I am on a brief visit to my childhood home east of Los Angeles, where almost nothing
remains from that period, the orange groves and strawberry fields having been replaced by malls and housing developments. Occasionally a remnant of the earlier California survives but so crowded by franchises and big box stores, as to lose all context.

Boy and I bought our country house, Darlington House, from the Proctors in 1998, who had lived in it since 1931. It is still referred to in the village as either "The Proctor's House" or "Margaret Proctor's house." Which I find amusing, and I encourage the continued use of. Shortly after we bought it, we interviewed a contractor who had worked on the house when Mrs. Proctor still owned it, who responded to some of our ideas that he wasn't sure that what we were proposing would fly with the owner of the house, who was very opinionated on such matters. When we pointed out to him that we were the owners, he got somewhat confused, as he obviously thought Mrs. Proctor still did! Needless to say, we did not engage his services.

I guess old habits die hard! It is pretty charming though!

Turn left at The Cheese House...

(The building that refuses to die.)

I always love your perspectives of our small town, but I feel bereft...like you are moving away to Nebraska or North Dakota! :-(

How about the Burden / Noguchi House?

What was lost in the fire is beyond comprehension, yet the house was rebuilt.

The best antiques I've ever bought, especially the antique dominoes and pool balls are from you. BTW I knew this blog was you__love it-obsessed!!