In General
When one thinks of architecture in Maine, three tropes come immediately to mind:  The classic and spare early 19th century white houses and village buildings so beloved by the Dilettante; the large shingled summer houses of the rich that occupy much of our 3,000 miles of coastline; and the prefabs and mobile homes that are the homes of necessity for much of the state's population.  But of course, there are many other styles too, from the cardboard corporate Spanish of Taco Bell to a flourishing scene in modern architecture. 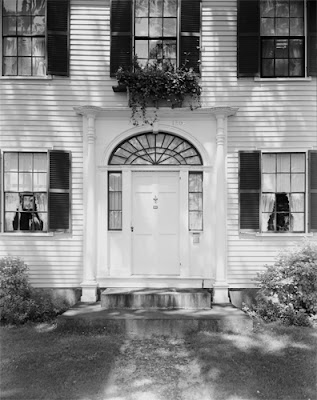 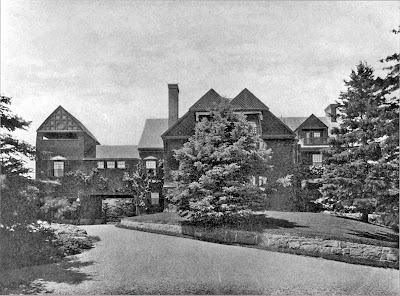 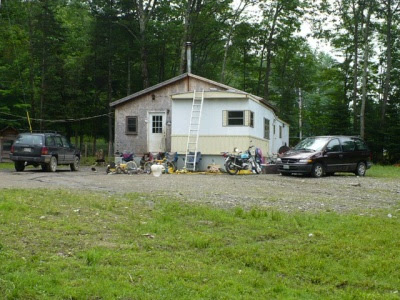 The other end of the spectrum in Maine building and housing.
The Exhibit
I had hoped to run down to Portland today--a nearly 3 hour drive---to view the Storefront for Architecture's exhibit about the last 50 years of modern architecture in Maine, and hear a lecture about same by Philip Isaacson, a Harvard trained lawyer who loves architecture and  is architecture critic of the Portland Press Herald, and winner of the 2010 Maine Prize for Architecture.  Unfortunately, fall chores and commitments made the trip impossible for today, and I will forgo the exhibit until next week, sadly missing the lecture. 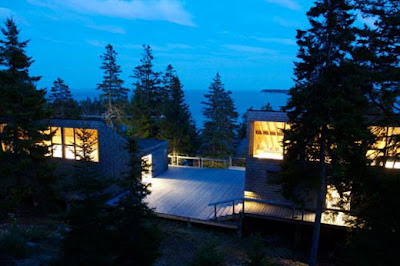 Haystack Mountain School of Crafts on Deer Isle, by Edward Larrabee Barnes
I have never met Philip Isaacson, but have been entertained and educated by his writings about art, design and architecture, including his very grown up children's book Round Buildings, Square Buildings, and Buildings That Wiggle Like a Fish, which I highly recommend for both its wonderful photographs of vernacular and designed architecture, and the perceptive writing about what constitutes great design. 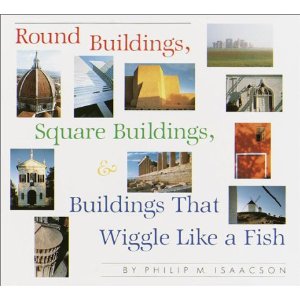 I have however, had several occasions to chat with Mr. Isaacson by phone on other matters of art & history, and by coincidence happened to have reason to talk to him yesterday.  In the course of the conversation, which was about early 19th century woodcuts, he mentioned that his own house, featured in the current exhibit, was also in last month's Dwell magazine.   Naturally as soon as we hung up, I was off to both the Storefront for Architecture website, and to Dwell Magazine's web site. ( I was supposed to be off for work, but I've never met a diversion I didn't like). 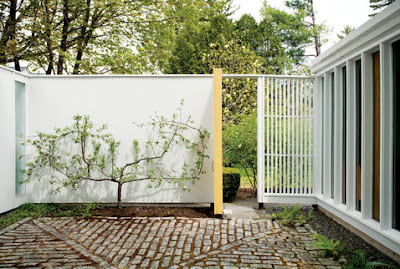 Courtyard of the Isaacson House, Lewiston, Maine (Photo by Eric Roth, Dwell Magazine)
The Isaacson House
As a student at Harvard, Issacson studied law, but was fascinated by design, and followed closely what was happening over at the graduate school for design, then headed by Josep Luis Sert.  In the late 1950's Isaacson proposed a project for his own house, a small house on an in-town lot in Lewiston, Maine.  Although interested, Sert ultimately declined, and in 1959, Harvard trained F. Frederic Bruck was commissioned for the job.  For a budget of $25,000 (ultimately $32,000), Bruck produced a small jewel box of a house, functional and spare, with a floor plan that echoed that of the traditional maine farmhouse, rooms arranged around a chimney core.   The house is carefully maintained by Isaacson in its original state. 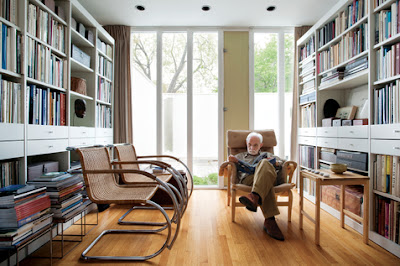 Philip Isaacson at home in his library (Roth photo, Dwell) 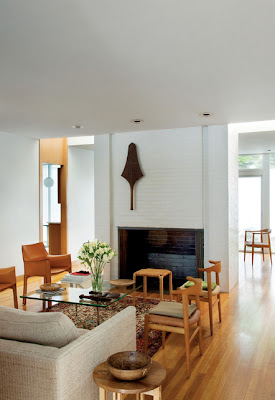 The Isaacson Living Room, looking through to Dining Room (Roth, Dwell)
The Dilettante's chair obsession is more than satisfied by the collection seen here, including
Cab chairs by Mario Bellini for Cassina, a pair of Cowhorn chairs by Hans J. Wegner for Johannes Hansen.

I will review the architecture exhibit next week.

For the complete story of the Isaacson House, by Chelsea Holder Baker, and a terrific slide show of photos by Eric Roth, please visit the full article, A Fine Vintage, on the Dwell website by clicking HERE.
Posted by The Down East Dilettante at 12:54 PM

cool post. I cracked up over that awful camper or trailer. Maybe a good wind will blow them away.

Mr. Isaacson's house is so lovely. Too often I find interiors design to take a back seat to "important" architecture. In this house, the balance between bones and furnishings is perfection.

I have to say DED, you out did me here. Cow Creek in Oklahoma is way more better than the other end of Maine's housing spectrum. Now where is that floating sofa?

Lovely to have you back again and so nice to now put a face to the blog! Great feature on Modernism in Maine. What a wonderful structure. So alive with sun, personality and snapshots of the outdoors. Unfortunately, housing for the poor is still something architects don't give much focus to, but people have to live the best they can sometimes. Thanks again.

It's worth pointing out to the young people in attendance that 25 to 32 thousand was about the cost of a three bedroom suburban rambler in 1960. Which makes this all the more remarkable.

Love that library, how beautiful...

Thank you for taking the high road and not being snarky about poor people in Maine. You present a comparison image and make a statement, and allow others draw their own conclusions. In many cases, "homes of necessity" indeed.

Stunning architecture with interior design that only enhances!

Law students are infamous for their descents into modernism.