Tonight in eastern Maine, as little ghosts, ghouls, and Lady Gagas rampage the streets in ruthless search of a candy high, there will be one terrified middle aged couple who are forced to flee for their safety, even though there is not a day in the year that the husband does not himself scare a few poor souls out of their wits.  Nevertheless, he is no match for the crazed hordes of children and adults who wish to descend upon his spooky mansion, and storm its iron gates on All Hallow's Eve.  Nobody knows where he goes on this night, but nobody blames him. 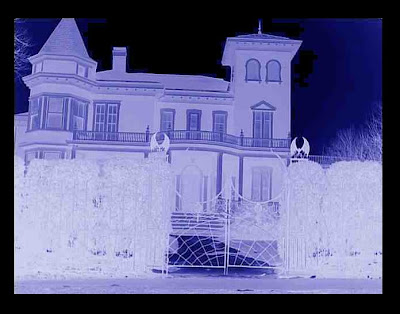 (Photo by Wendy C. Allen, found at eelkat.proboards.com)
The man in question, of course, is horror writer Stephen King,  and when he and his wife Tabitha moved into their appropriately Addams family-ish mansion in Bangor, they learned the hard way that they Halloween really is the scariest day of the year.  Since then, the couple have been forced to place notices in the local papers that they will not be in on Halloween.  It is a rare day, perhaps even a rare hour, that a fan, having made the pilgrimage, cannot be seen being photographed in front of the King house. 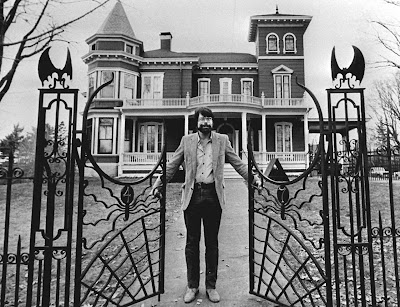 Stephen King in front of his house in 1982, with the appropriately creepy iron gates he added to the property (Bangor Daily News photo)
Bangor, 'The Queen City of the East" is the largest city in Eastern Maine, third largest in the state in fact, with a population of 31,473 (we think big up here)   Speaking of scary, it sometimes seems that there is a big box store for  every one of those 31,473 souls, ringing the entire outlying perimeter of the city like giant fluorescent fortresses.  In the mid 19th century, at the edge of the wilderness, it was one of the lumber capitals of the world.  Thoreau visited on his trek through Maine, and found a raw town full of activity---brothels, muddy streets, tent encampments, new mansions for the newly rich, the Penobscot River flowing through clogged with logs, and the ships that would then take them around the world.  In the 20th century, Bangor was a dying backwater.

An English steamer and a Scottish 4-masted bark loading birch spoolwood (for spools or bobbins) at Bangor in 1895
The lumber barons mansions were mostly turned to rooming houses and offices, or torn down for gas stations, and half of the handsome downtown was eradicated for urban renewal in the sixties, giant riverfront parking lots replacing 19th century warehouses, beaux art theatres, a magnificent Romanesque train station, and cobblestone streets.   In desperate need of a tourist attraction, the city fathers built a new civic center, and in front of it, erected a giant statue of Paul Bunyan (much to the chagrin, understandably, of many a Michigan resident).   This statue became THE place to be photographed when visiting Bangor, and wasn't displaced until Stephen King moved to town, bought an 1850's lumber king's Italianate mansion and gave local tourism a much needed shot in the arm. 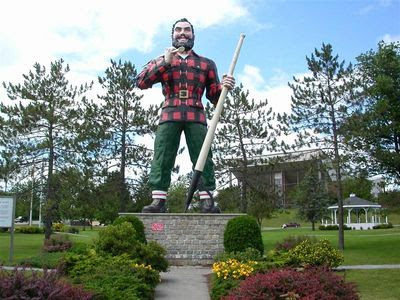 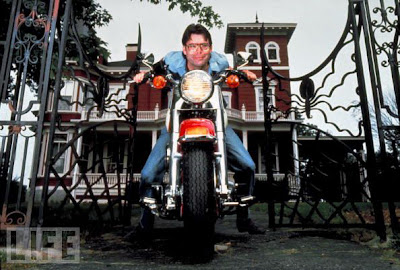 Stephen King at home---the new tourist attraction (Life Magazine)
When I was growing up in Blue Hill, the local celebrity, in the next village over, was writer E.B. White.  It was a very different scene from Bangor and Stephen King.  White once famously convinced an interviewer to merely report that he lived in 'a New England coastal town somewhere between Nova Scotia and Cuba'. We all assiduously protected--and respected--White's privacy.  In the summer, when the hordes half crazed fans would show up, wielding the predictable cameras around their necks, and in their hands copies of Charlotte's Web or One Man's Meat that they just knew they could get autographed if only they could find his house, we locals would just have no idea how to direct people to his farm.  Nope, no idea at all how to get there.  E.B. Who?
As for Stephen and Tabitha King, we have never met (although he and I were both patients in the orthopedic ward of the same hospital at the same time, both of us considerably fractured in encounters with careless drivers, although his presence there elicited considerably more press attention than mine did), but my admiration for them is boundless.   Their lifestyle is relatively simple in relation to their means--oh sure, there are those private jets to baseball games-- but their philanthropy is huge by any measure, their Stephen and Tabitha King foundation having given away tens of millions of dollars locally.  What has impressed me, countless times, is the thought and intelligence behind their gifts---a serious desire to nourish mind and body is a hallmark of a King gift.  The gift can be small and personal---new uniforms for the local little league---or large and grateful---a multi-million dollar writing fellowship in honor of King's writing teacher at the University of Maine, hitherto a school that tended to emphasize hockey instruction over education.  King made a multi-million dollar lead gift to the Bangor Public Library, enabling this central library for the eastern half of the state to upgrade facilities and services.  Although the Kings understand the importance of lending their name as well as giving money to some projects, most gifts are quiet and gracious---the Shawn Mansfield Stadium---named for a local little league coach's son who has cerebral palsy---the Beth Pancoe Aquatic Park in honor of a local swimmer who died of cancer.  The local Y's have state of the art facilities thanks to the Kings, and they fund literally dozens of high school and college scholarships.  There is hardly a library in the state that has not received a grant from the Kings.  The list goes on:  Public Radio.  Progressive political causes, more important than ever in these politically regressive times.  Conservation.  The arts.  The Eastern Maine Medical Center.
Yup, the Dilettante has a big ole philanthropy crush on Mr. & Ms. King.  There should be more like them.  They've earned their day of rest from the creepy and the spooky. 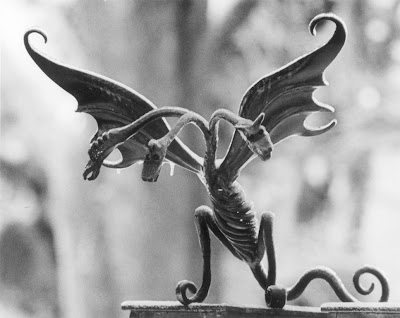 Detail of 3-headed serpent on the King's gate (Bangor Daily News)
Posted by The Down East Dilettante at 10:58 AM

Absolutely fascinating history. I had no idea the details of Bangor's past or present. Oh, the joy of our blogworld!

The gates at the King estate certainly would draw tourists and fans from near and far!

Great post on Stephen King and Bangor...I'm dying for that three headed dragon! I just bought a ton of candy, so if you're in costume and passing by tomorrow.....Boo!

the Paul Bunyan is AT least as scary as anything Mr King has conceived. I like the way ME thinks by the way. and felicitations on all hallows eve to you. la