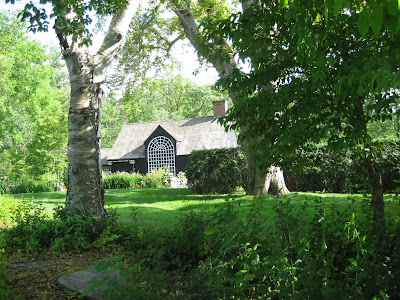 Sunday's post about Hamilton House (click HERE), would have been too long had I done justice there to the delightful Garden House, so herewith pictures from last summer, and from 1926, of the cottage that inspired Henry Davis Sleeper to decorate Beauport as an American house.  The cottage was built in 1902 from parts salvaged from a house in Newmarket, NH, and subsquently enlarged by two more rooms to the form it has today. 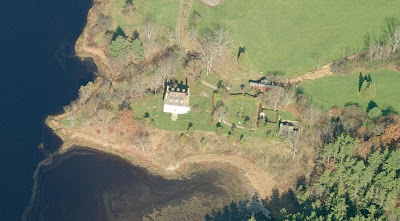 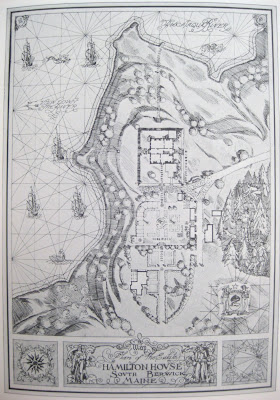 It is interesting to compare a modern aerial view with a map of the grounds drawn in 1932 for Great Georgian Houses of America  published by the Architect's Emergency Committee to provide work for draftsmen and architects during the great Depression.  Amusingly, the river is labeled as the Piscataqua, which divides New Hampshire and Southern Maine.  In fact, Hamilton House is on the Salmon Falls river, a tributary. 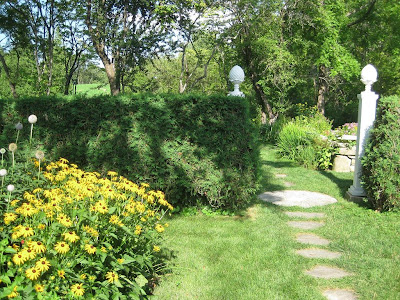 A small garden room makes the transition from the large formal garden to the more intimate old fashioned garden in front of the cottage. 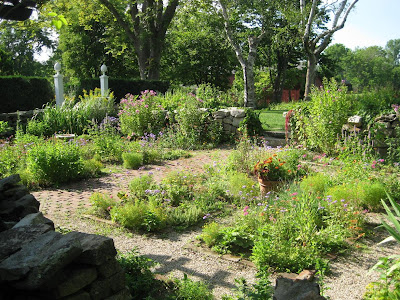 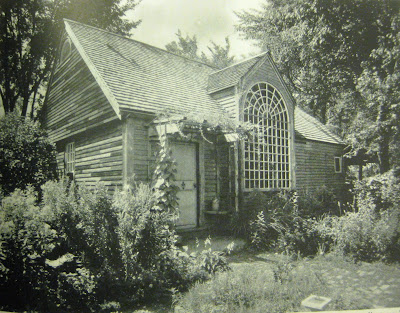 The cottage was built as one room garden retreat, with careful attention paid to scale and texture in materials. Although much seen since, this sort of careful attention paid to the appearance of age had rarely been applied to an American design before this---although of course European inspired examples were rampant.  This is concurrent with a rise in pride in traditional American design and craft. 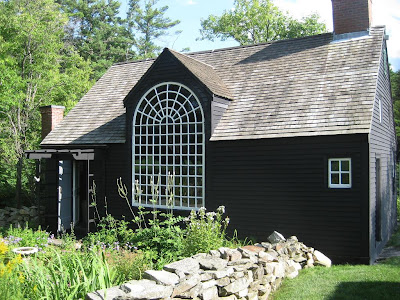 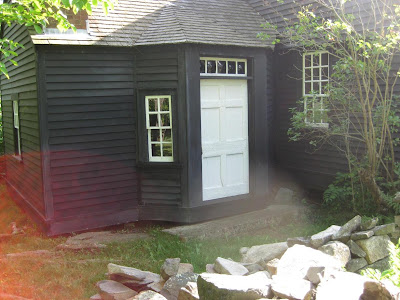 The semi-octagonal entry to the later wing is charm itself, carefully composed as a painting to evoke an earlier New England.  The panes in the transom are bull's eye glass. 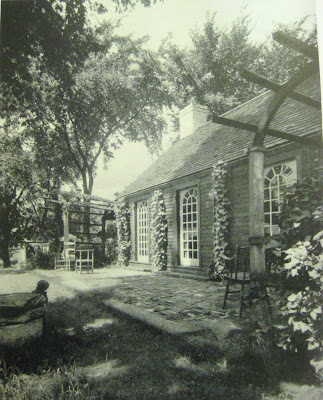 The garden house as seen from the river side in 1926, with antique painted chairs casually placed on the terrace. 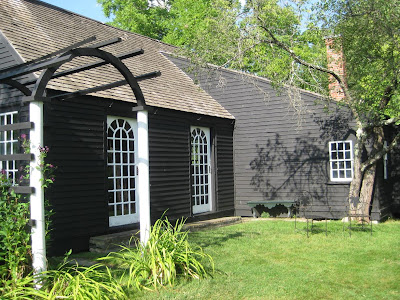 And here as it appears today, with the later wing.  Although it appears casual, it is in fact a deliberately composed picturesque composition, to appear as a shed addition to an earlier building.  Would that everyone still added so sensitively to early buildings, and threw away the window catalog 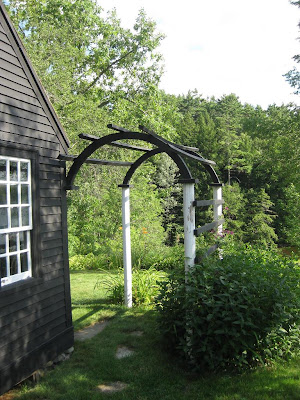 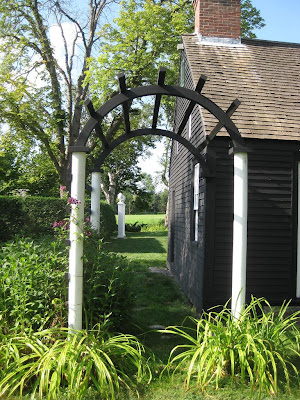 The Pergola  arch attached to the corner is a charming touch, framing views in all directions 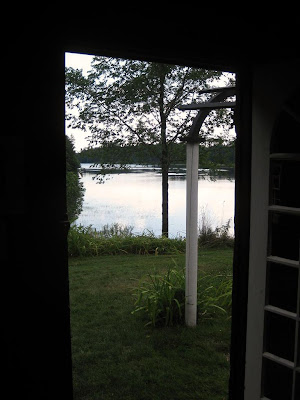 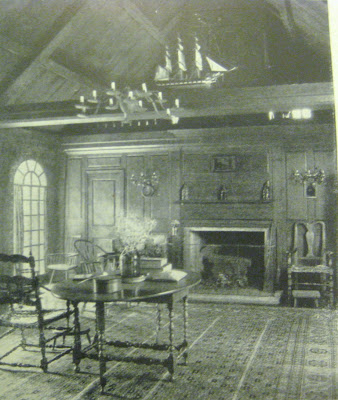 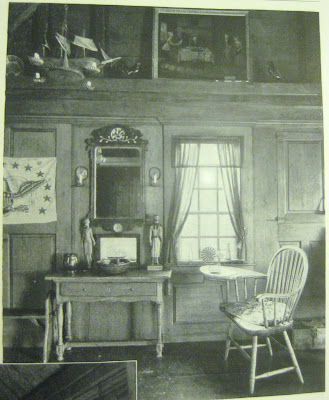 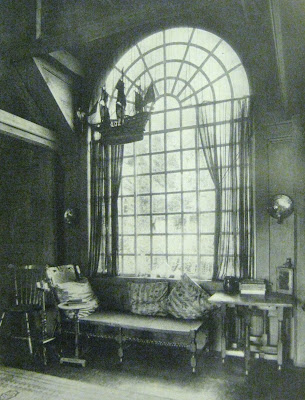 The main room, with its salvaged 18th century paneling.  Great attention was paid to the furnishings as to texture, patina, and scale.  The room has a romanticized 18th century appearance, on a modern scale, with its high ceilings and balconies.  The window is masterful---designed to echo the arched stair windows of the main house, it is much larger, but the small pane size retains the scale of the building.  Notice the ship's models hanging in front of the window, a favorite motif of the Colonial revival. 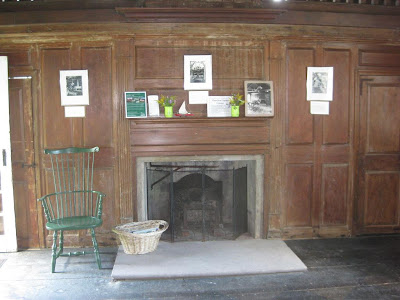 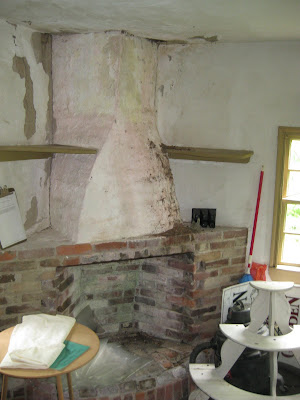 If the Dilettante were to make a criticism of Hamilton House's otherwise excellent management by Historic New England, it would be in the secondary rooms of the garden house, of great architectural interest themselves.  Maintenance is clearly deferred.  The tiny vestibule is shabby, with random storage (there are both a carriage house and a barn on the property, one presumes with some storage space.  The other small room is used as the very necessary gift shop, but so poorly arranged as to completely obliterate the room--and yes, I understand very well, as president of an historic house museum myself, the problems involved with volunteers and good intentions and necessary functions.  That said, it should still be better arranged.  The main room fireplace wall could use some clean-up of arrangement also.  And the opposite wall, with an ice cream cooler?  The less said the better.  End of rant.  Back to our program.  The room sees service today as a beautiful setting for events, concerts, or just as the Tysons intended--a cool retreat from the garden. 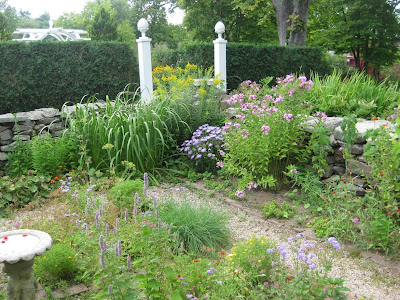 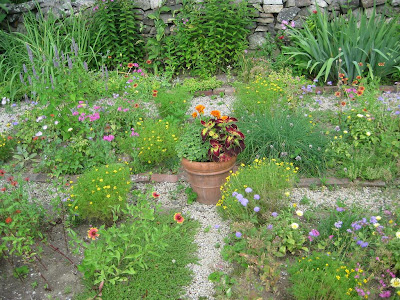 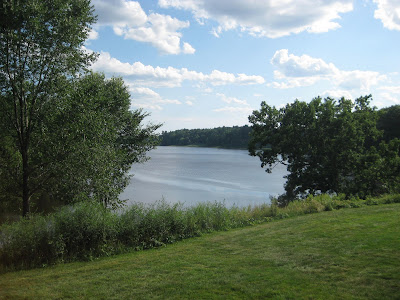 The cottage sits at the far corner of the gardens of Hamilton House, at the edge of the large meadow, flanked on one side by a charming dooryard garden, the other by the river view. 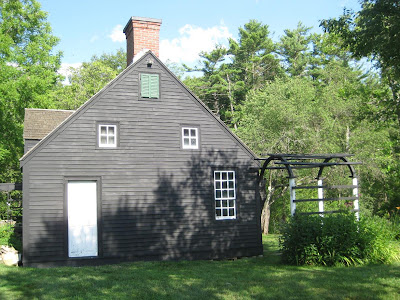 The irony of the model of a hardscrabble one room New England cottage being adapted as the playhouse of two wealthy women, with its echoes of the Hameau at Versailles does not go unnoticed, but the results of the Tyson's romanticized vision of Olde New England are charm itself. 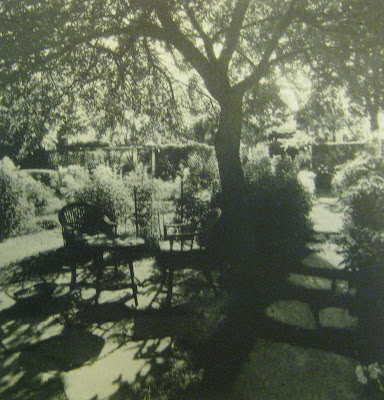 In 1926, this area was called the 'Coffee Garden' by the Vaughans. 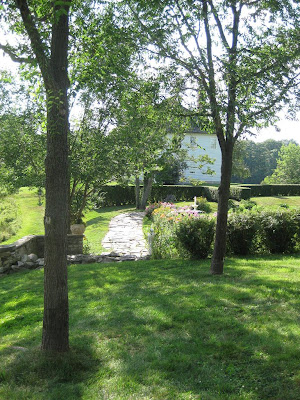 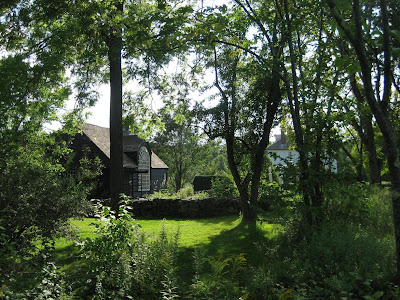 Hamilton House is located on Vaughan's Lane in South Berwick Maine, and is owned by Historic New England.  The grounds, and the adjoining 250 Vaughan's Woods, given by Elise Tyson Vaughan to the state of Maine, are open year round dawn to dusk.  The House is open during the summer months.  Also in South Berwick is the Sarah Orne Jewett Homestead, also an 18th century Georgian colonial, preserved as it was in the writer's day, with family furnishings and William Morris wallpapers selected by Jewett and her sister, and also owned by Historic New England.  Much more information about both can be found at the Historic New England website by clicking HERE:
For the faithful reader who wanted a closer look at the valances, click HERE for Reggie Darling's post at EEE about the Hamilton House dining room. 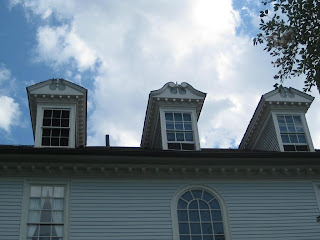 Posted by The Down East Dilettante at 1:15 PM

You are a photo sourcing wunder.

Such a lovely little retreat.

Absolutely charming! Hopefully your constructive criticism will be taken into consideration. I very much appreciated your including the beautifully drawn site plan and photos of the garden. The landscape setting is such an integral part of the whole story of a historic house. (I can't believe the magazines today that neglect to even show a small shot of the exterior).

Oh, oh, oh...I'd rather have the garden house. Lovely.

Does the size of that arched window bother you? It's not so bad from the inside, but outside it looks like the work of the neighborhood bricoleur.

Raina, it comes from a long life spent looking at picture books.

John, I couldn't agree more, I think that plans are essential to an understanding of the work at hand

Mrs. Blandings, couldn't agree with you more--my idea of a perfect house (for me) is one large room with two small rooms and plenty of doors outside. This has been a favorite since childhood.

Ancient, I'm just fine with the window inside and out. And the lesson learned for me is how it's held to scale by keeping the panes small.

If only I had a small garden room that could make the transition from the large formal garden to the more intimate old fashioned cottage garden. I would be a very happy woman. And I would use the garden room, itself a delight.

But your photos make the gardens look big. Did they have full time gardening help?

Hels, several full time garden helpers back in the day. And I totally agree with your vision of happiness.

charm itself indeed. just my idea of perfect, yes the garden house will do just fine and I promise to keep it tidy. pgt

ah, Gaye, I know you will furnish it with marvelous wonders!

About that over scaled arched window, it ought not
to work, but for some strange reason they got away
with it!! As you say, the smaller panes etc. But then I
fell in love with the whole damn place and as we know,
love is blind.

It certainly ought not to work (which, as you will see next week is a hallmark of Herbert Browne's designs) but it does---it's that bold stroke. And indeed, love is blind.

Reminds me a house in Southampton, The Port of Missing Men owned by the Rogers family, but on a much smaller scale.I always love the quirky odd structures on old estates that have been made into other uses.

Gary, absolutely reminds me of Port of Missing Men also---the very same sensibility at work, but this one seems to have been the one that spawned many imitators---this sort of room appeared in many important houses in the first third of the 20th century. The earliest of all the colonial revival pastiches was Indian Hill at Newburyport Massachusetts, built in the mid 19th century by the wonderfully named Ben.Perley Poore

This cottage, this house, I've not been quite so taken by anything in a very long time, it's exquisite, that window, some kind of lust set in and I began looking for an antique window somewhere anywhere, something monumental yet intimate [the intimacy being, as you say, the product of the small lights]. This is close, close enough, imagine this fitted into a small country house. How wonderful that these people hold out treasures from the demo work they do.

Isn't this little house a delight? And it has held up so well---avoids corniness or cliches, yet full of charm.

That bow window is a bit of heaven.

oh my it's so lovely! and i love that the garden house is painted black, too - such a great backdrop color for plants.

And fascinating to see how it was decorated in eighteenth-century style - as was done with many restored or new-old houses in England at that time.

We From SEO SUPER Wowo Introduces Its Sales Sells Herbal Products Men And Women ALL PRODUCTS FROM our clients in Down's.