"The Riviera, Where Every Golden Coat of Sun Tan

...has cost the gold of more than one man..."
The calendar says late fall, but a  look out my windows says winter.  With darkness arriving by 4:00 PM, one is very glad for Netflix---where I can dig deep into the archives of forgotten films and sometimes come up with gold, streamed to my laptop even as I check email.  Amongst the movies I've viewed lately, a theme has emerged (and one knows how the Dilettante loves a theme--bring on the coincidence!)

It started with 'Encore', a collection based on short stories by Somerset Maugham, the writer whose reputation in the design world is eclipsed by having been the ex-husband of decorator Syrie.  Each story is introduced by Maugham himself, and one of the treats is that these narrations are filmed in the garden of his home, Villa Mauresque at Cap Ferrat, almost overshadowing Glynis Johns' performance as a high diver who loses her nerve while performing at Monte Carlo.  The decadent Maugham bought La Mauresque in 1928, and like so many houses of the socially ambitious before him, it became his calling card into Society, with invitations coveted even by those who disdained him. Crime writer E. Phillips Oppenheim wrote, ‘Everyone on the Riviera accepts an invitation from Maugham at any time they are lucky enough to receive it’ 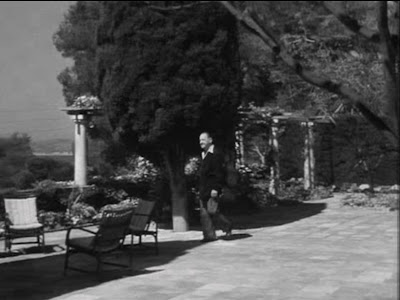 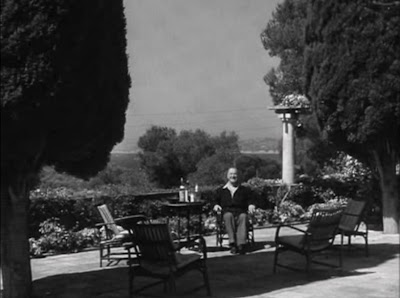 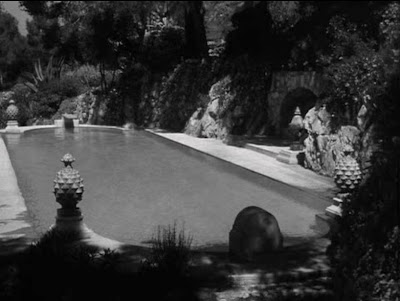 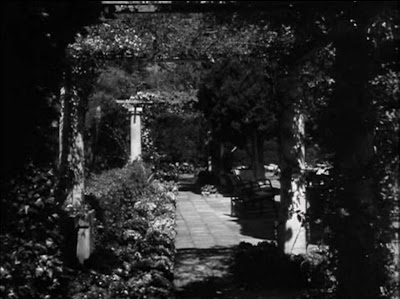 Screen caps of Somerset Maugham and his garden at La Mauresque from 'Encore'
Two movies later, I found myself back on the Riviera with "Love is a Ball", starring Glenn Ford, Hope Lange, and Charles Boyer.  A plodding romantic comedy, the movie was filmed on location, and although Boyer does his best as a sophisticated matchmaker for money, the real star of this movie is its location---Ogden Codman's villa La Leopolda at Villefranche-Sur-Mer.

Charles Boyer, as Mr. Pimm, arrives with entourage and realtor at 'La Leopolda' in "Love is a Ball"
Everyone interested in design history knows the story of Codman, I'll try to do the briefest of recaps---a highly refined soul, he grew up in an aristocratic Boston family.  When his father suffered financial reverses, the family removed themselves to Europe, where Codman's aesthetics took shape.  He became a designer/architect, and collaborated with Edith Wharton, on the groundbreaking The Decoration of Houses, the book that blew the knick knacks of Victorian America right off the what-not shelves, and ushered in an era of delicate French style that was to define rich taste for the next half century.   From Wharton came Codman's big break, the decoration of the private quarters of Cornelius Vanderbilt's 'The Breakers' at Newport.   From there, he went on to collaborate with Elsie de Wolfe, and became one of Society's favorite architect/decorators, creating delicately detailed houses for the haute monde from New York to Newport.

They inspect the terrace and the view, where the realtor warns them that the rent is "very expensive---7,500,000 francs a month"
In middle age, to everyone's surprise, 'confirmed bachelor' Codman married the wealthy widow Leila Griwold Webb, six years his senior.  After her death a few years later, he found himself rich, and getting richer by the day on the inflated stock market of the 1920's.  He decided he could retire, and casting aside the vulgarity of America, so unpleasant to his delicate sensibilities, he removed himself to France, where he bought the spectacular property of King Leopold of the Belgians, and began construction on his dream house, 'La Leopolda', the distillation of all his design theories, and intended to be the finest house on the Riviera.

Boyer & Company inspect the kitchen, and walk through the empty main floor
After hubris comes a fall, and the Depression hobbled Codman's finances.  Forced to rent out 'La Leopolda', Codman retired to his small chateau at Évry-Grégy-sur-Yerre.  After their marriage, the skinny broad from Baltimore, and her ex-king husband, whose names do not get uttered in this blog (there is a limit to my shallowness, dammit, and those two are it), attempted to rent La Leopolda.  Famous freeloaders both, they tried to get a better deal and concessions from Codman, who finally declined to rent to them, grandly saying "I regret that the House of Codman is unable to do business with the House of Windsor".

Keeping an eye on the heiress across the bay, from the terrace at 'La Leopolda'
Codman spent WWII at Gregy, in bed with his books and chocolates, even as the chateau was occupied by the Nazis.  Codman died in 1951, the year La Leopolda was sold to Izaak Killam.  It was later owned by Gianni Agnelli, and currently by Lily Safra, who almost, but not quite, sold it to Russian billionaire Mikhail Prokharov or Russian billionaire Roman Abramovitch, depending on which account you read, for half a billion dollars.  Repeat:  Half A Billion.  The buyer backed out, and Mrs. Safra, who really didn't need the money, got to keep the 50,000,000 deposit.  One hopes she donated it to charity.

Glenn Ford on his way to see what everyone else has been watching through the telescope
The Rivera theme thus established, I moved on to the wonderful movie version of Maugham's The Razor's Edge---the version with Tyrone Power, Clifton Webb and Gene Tierney of course, not the embarrassing Bill Murray remake.  And how do I intend to tie all this together?  Be patient.  We're almost finished.

The Riviera of 'The Razor's Edge is mostly a sound stage version, albeit a gorgeous one.  The sets include a paneled Paris salon, which was built from  boiserie rescued by MGM from the Fifth Avenue mansion of Codman's first patron, Cornelius Vanderbilt II, when it was demolished in 1927.  And in one of the movie's best scenes, Codman's famous remark to the Windsors is echoed by the dying snob Elliot Templeton when an invitation is procured to a party from which he had been snubbed "Mr. Elliott Templeton regrets that he must decline Her Highness's kind invitation due to a previous engagement with his maker..." 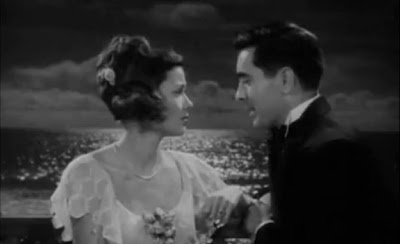 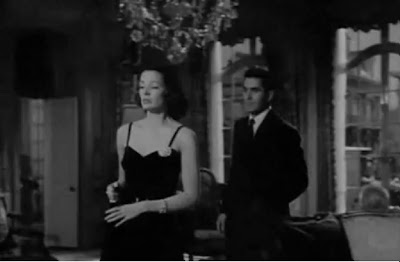 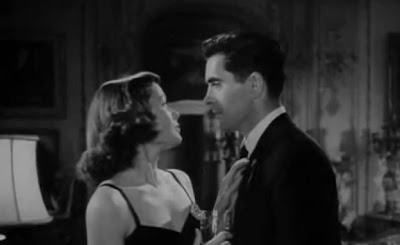 Soundstage Riviera:  Gene Tierney and Tyrone Power fall in love on a terrace on the 'Riviera'
and years later, re-unite unsuccessfully in 'Paris', actually a salon from the demolished Vanderbilt house
I think that ties up all our lose ends for today, although I probably should now rent 'The Red Shoes', with its famous scene of Moira Shearer running down the endless garden staircase at La Leopolda..  Or 'To Catch a Thief', where Cary Grant introduces Grace Kelly to quiche in his villa high above the Riviera... 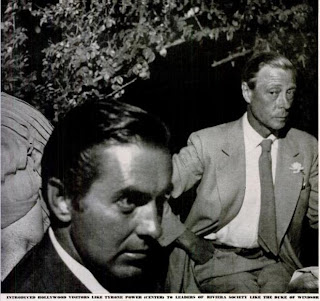 Class dismissed.  We'll go out with this clip of Mabel Mercer singing Cy Coleman's  The Riviera.  I could tie this all into Down East Maine by mentioning the great actress Maxine Eliot, who was born just south of here in Rockland, Maine, and who knew both Maugham and Codman on the Riveria, and whose villa at Cannes was was later owned by Aly Kahn and Rita Hayworth, who no doubt knew Tyrone Power, but I have to go shovel the car out of the snow.... 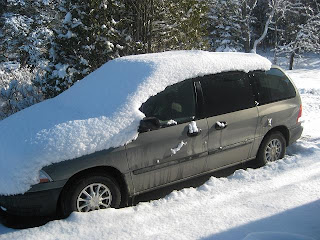 Posted by The Down East Dilettante at 12:34 PM

Leave the car alone and see what else Netflix has to offer.

Oh, and have a most wonderful weekend!

La Leopolda is My Favorite House I Never Even Visited!

Rushing over to Netflix, before everyone else does. Thanks, you've made my weekend!

Finally! Someone else who shares the same gag reflex I have towards the Windsors. I recently saw "The Razor's Edge" again and found it a little tepid. Never saw the Glenn Ford title so I'm off to Netflix as well. What treasures you unearth. While having lunch many years ago on the terrace of the Villa Ephrussi I gazed down at the villa La Leopolda from the entrance drive and thought - wow, do my fellow Bostonians know a good spot to party or what? - lol. Have a great weekend. Pray the nor'easter stays well out to sea.

"Ah, the Riviera. On every street a gay casino..."
I once played Blossom Dearie's rendition of that tune
for a French woman who lived in the South of France.
A puzzled look came over her.
"Gay casinos? On the Riviera? Jamais."

Those two interior shots of La Leopolda give a sense
of it being stripped down over the years and I'd swear that Codman had it lushly decorated. Still, being distracted by film backgrounds is, I agree, an almost
irresistible temptation and once you begin to recognise
actual rooms the plot can just go to blazes.

I know what I'd like to do next week when I am up in northern New Hampshire...be enchanted by the Riviera.

Thanks so very much...I love how you tied the strands into a gorgeous knot.

DED: Another genius post. I, too, share a disdain of the couple you shall not name. Amoral parasites, with lots of fabulous stuff. I, like others, shall be mining this movie list this holiday. When reading your essay, I wondered "How is he going to wind this up?" and about busted a gut at its conclusion. Hilarious! Reggie