It is my impression that decorators were not much used up here in the 50's and 60's.  Most people did their own houses.  If new upholstery were needed, one went to Mr. Macaul, the excellent upholsterer over in Bar Harbor, who had the best sample books, and gave good advice.  For slipcovers or curtains one would call Mrs. Horton.  One knew enough not to hang paintings too high, and the rest was up to fate.
There were exceptions, of course.  I remember one house from my youth that always struck me---with a very stylish dining room in dove gray with bold accents in leaf green and splashes of yellow.  Only years too late, after that big old shingled house was demolished did I discover that the the reason for those stylish interiors was the owner's sister-in-law, Diane Tate of the famous firm of Diane Tate and Marian Hall.  Tate is given rather short shrift in Adam Lewis's The Great Lady Decorators, but on evidence of a few pieces of Tate's furniture which came my way years ago, I would beg to differ. 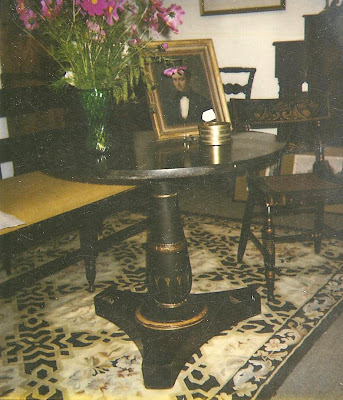 This Directoire center table, with its Egyptian inspired lotus column base, painted in black with red and gilt accents and a stone top, was one of those pieces, and according to the niece who inherited it, was used in Tate's New York apartment.  I'm sorry for the poor photograph---it's a scan of an old Polaroid, and doesn't begin to convey the real quality of the table..  I don't know how we antique dealers survived before the invention of the digital camera.
Below, just for fun, an old advertisement in which Tate & Hall endorse a silver plate pattern.  Personally, I'm mad for the Etruscan inspired china. 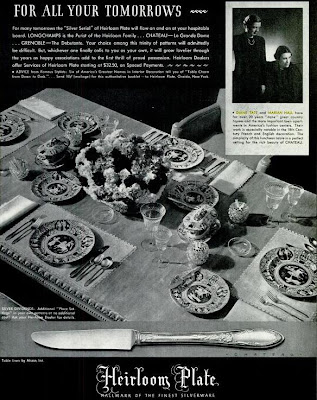 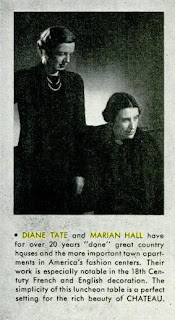 Posted by The Down East Dilettante at 10:23 AM

Thank you so much for featuring Diane tate. From the little that I have read and heard, she was an amazing woman. The table and china are just a glimpse!

I have a New Giveaway from My Sparrow, do come and enter!

I totally agree about the china pattern. Oops, I realize that borders on the phrase "my fine china and crystal" (drives me nuts) but it is beautiful. The table is a beauty too, and from your description would have had quite a presence in a room.

I have an inexpensive blue & white Spode repro of the china that I use everyday. On the back it says that the pattern is 'Greek' first introduced c.1806. It does not have the subtlety of the nineteenth century plates, however, and I would love to have brown & white. But it is a carefree substitute.

If Diane Tate would seem to be a shadowy figure that is partly explained by the way Marian Hall concluded her essay in The Finest Rooms. She ends
with the terse statement that "the accompanying illustrations include her work as well as mine..."
yet no distinction is made in the captions to all the
photographs of her work.
That book, very much of its period, was discovered by my younger self at the public library in the late 1960s. I wasted no time in doing over my sister's bedroom in Rose Cumming purples, and then moved on to convert the family playroom (actually a summer room attached to the garage) into a fantasy on a theme of Mrs Henry Parish II. Walls painted with leafyfronds, sofa slip covered in faded blue brocade, and a poor man's version of an oval Aubusson carpet inhooked wool. That the end result bore no relation to its modest suburban setting, was not something that concerned me at the time. It was decoration with a capital D.

Each piece of "provenance" that can be put together on posts like these are wonderful gifts. I know there are many unsung designers of "old" that deserve more than anonymity. fortunately you are up to the task-and for that thank you. pgt

Each piece of "provenance" that can be put together on posts like these are wonderful gifts. I know there are many unsung designers of "old" that deserve more than anonymity. fortunately you are up to the task-and for that thank you. pgt

!! so much for word verification! and might I add merry christmas