ANOTHER SIDE OF MAINE: An Early Carpenter's Simple House 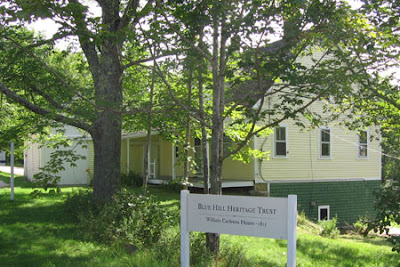 As one approaches our town on Route 15, one rounds a bend along the shoulder of the 'mountain' and drives past a grove of beech trees, barely changed in my lifetime (but for the addition of an unfortunate steel storage building), that marks the beginning of the downhill descent to the village. After a long road trip, it is the moment that one knows one is home.  At the left is Mountain Road, and on each corner an early house.  The uphill corner is occupied by an elegantly conceived cape with an octagonal entry porch, and dormer with arched window above, the down hill corner by an old yellow farmhouse, now the headquarters of the local land trust, stewards and protectors of the front slopes of the mountain above.
This yellow house, also unchanged in my lifetime, is happily kept so by the Trust,an admirable echo of their policy on the 5,000 acres of land they steward on our peninsula. But appearances can be deceptive, and the house, which appears at first glance an ordinary Victorian farmhouse, is actually much older, a remodeling of a tiny Federal era house, and it holds several secrets.
It was built around 1815, on what would then have been a lonely bare hillside, by a housewright named William Carleton.  Built into the slope, its lowest level is thought to incorporate an 18th century cabin already on the site.  This space contains an early kitchen, unused and barely touched for most of the 20th century, in effect a time capsule, shreds of mid-19th century wallpaper clinging to the simple red-painted sheathing underneath.  The 1810's were a moment of prosperity in the hardscrabble 19th century history of our village---several of the elegant, Federal style houses there, with their lovely doorways were built in these years---but it is clear that Mr. Carleton did not  share in this prosperity.
Early photographs of Mr. Carleton's own home bear evidence of a hard New England life----one thinks immediately of Ethan Frome, or the poorer villagers and farmers of William Dean Howells or Sarah Orne Jewett novels. 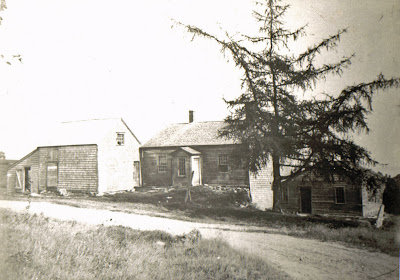 This first photograph probably dates from the 1880s, and shows a house untouched by time, already old, faded, worn. 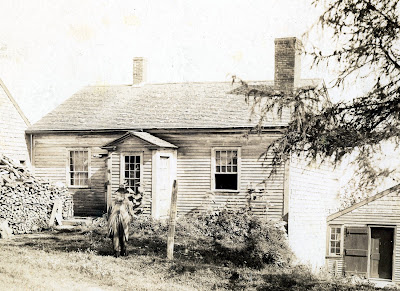 It is interesting (to me at least---you the reader will either have to ride along or jump out of the car now) to zoom in closer and contemplate the many details in this next picture.  At the windows hang simple panels of fabric, one drawn up to let in light and air.  There is no screen at the open window. 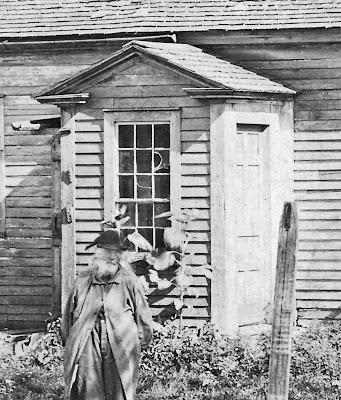 In front of the house, stands an elderly man, likely either Mr. Carleton or his son, wearing the costume of more than half a century before, tricorn hat and homespun jacket.  Behind him sunflowers grow in front of the small-paned windows with wavy glass. To the left of the vestibule, a complicated homemade gutter is seen, ending in a wood spout whose high placement suggest that a rain barrel would have been placed below it to collect water. 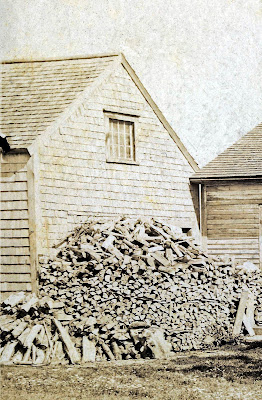 There is a huge woodpile stacked in anticipation of a long Maine winter.
The small shed at ground floor level harbored a secret, quite unlike anything else I have ever seen in an early house.  Down a flight of stairs to an underground level, one finds oneself in a tiny chamber.  The walls are blocks of rough cut granite, the ceiling a granite slab which would have been the floor of the shed above, perhaps once used as a still room or buttery.  The floor of this underground underground chamber is another slab of granite, with a hole in the center, giving access to an underground spring.  However utilitarian its purpose, this cool, damp, quiet space is as mysterious as a Druid cave. (and for the life of me, I cannot at the moment find my photo of it, lost somewhere amongst the thousands). 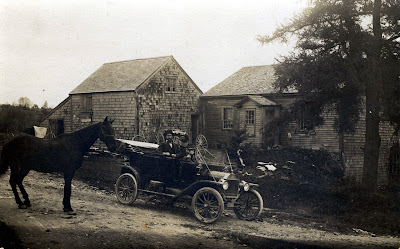 In the early 20th century, the rise of photography made many things possible, and 'real photo' postcards of one's home, printed directly from glass negatives, were very popular. Miss Kate Carleton, the spinster daughter of the house, posed for her postcard, sitting in a Model T with an unidentified gentleman.  Against the shed is a buggy, soon to be obsolete, and beside them, a horse, clearly contemplating the new contraption that will soon render him obsolete. 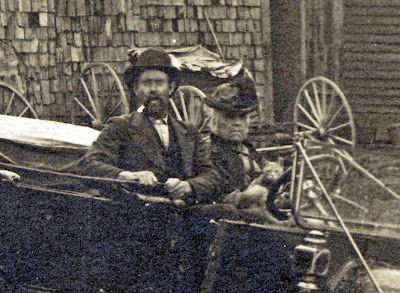 When we zoom in on this photograph, we find that Miss Carleton, aunt of the village doctor, holds a large plump cat in her lap.  One doubts that the cat remained for the drive, and the wild expression on the man's face could be interpreted either as madness or 'let me out, of here,  neither the old lady or the cat know how to drive and she's got a gun'.  In these two photos, 20 or 30 years apart, we have spanned a century from Mr. Carleton in his tricorn hat to his granddaughter behind the wheels of a mode of transportation that he could not even have imagined when he built the house. 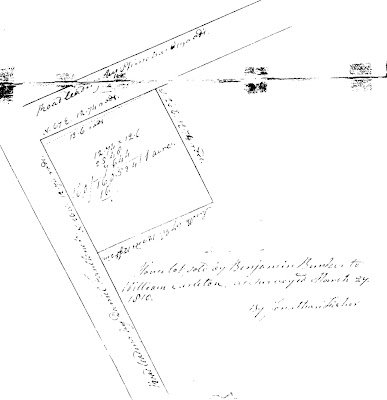 Footnote:  The town's first settled minister, Jonathan Fisher, also worked as a surveyor to supplement his meagre pastoral stipend.  This is his survey of the Carleton property.  Interestingly, no structure is shown,  raising the question whether it is not true that there was an existing 18th century cabin, or if it was thought so insignificant as to be not worth indicating.


Photographs from the collection of the Blue Hill Heritage Trust
Posted by The Down East Dilettante at 8:56 PM

I love the ride-the family resemblance is shocking! Do you suppose it was he in the seat rather than the granddaughter? that the house is thankfully preserved is comforting. You must be the village historian amongst other titles. pgt

Fascinating! An old photo can tell so much, but it helps to have a knowledgeable interpreter.

What you said of the span of time between the old man in his tricorn hat and his granddaughter in the automobile reminded me of my grandmother. She was born in the 1880s and lived to see men on the moon which, if you think about it, is an astonishing range of technological change.

Charming. About screens, I wonder how many bugs there are in Maine in late summer in midday? Interesting to see the woodpile, not fussed over, just piled as high as one could reach, making it easier to get at in deep snow.
Were they perhaps playing dress up at least in the first photo? I have photos of my house from the 1910's with lovely girls on the porch giggling in early nineteenth century clothes at spinning wheels.

Gaye: Hmm, that would make her our earliest known drag queen.

Blue, my own grandmother, born 1901 lived into the internet age, and her observation was not far from yours

Balsam, yes, there are plenty of little biting flying things up here in midday in summer. Plenty. Oh yes indeedy. Lots and lots. And lots. Though it is at dusk, as the mosquitos gather that you can actually hear them revving up like a bomber squadron...

and if you live north of Bangor, they have the Maine state insect up there year round - that would be the Blackfly except up there in the cedar swamps they're 2inches long and have stainless steel stingers.

DED - that granite room with the spring sounds like a dyn - o - mite root cellar too me. the roots and the taters would love it.

i am lucky to still have in my possesion my great-great-great-grandfathers journal. he kept track of his daily doings from when he moved up here to northern Massachusetts in 1800 (for those "from away", Maine didn't become a state until 1820) until he died in 1846. we still have many of these. he told the weather, what he bought and sold, doings on the farm, births and deaths and now and then ramblings on politics. they give a great pic of life that none of us will never experience.

security word def - "pitte' " - altho you probably didn't know it, that famous actor is French and his last name means envy or jealousy. (sometimes i think DED makes up his own "random" security words)

Fascinating. I'll never see that house the same way again. Could the granite room be for storage of milk? There's a much larger but similar thing alongside but at a distance from Battle Abbey in Sussex.

Robin--always a pleasure to hear from you!

Good question. There's nothing else like it in town. Although it covers and provides access to the spring, certainly they must have taken advantage of its cool damp for winter storage.

I live in the Adirondacks, where we certainly have black flies, and mosquitoes, but not all year. How unfortunate (we have fewer bogs). Sunflowers rarely get big enough to bloom for me, however, since it can be cold through all of June. I was thinking that they likely closed the windows at night.

I change the wallpaper on my monitor every week or two. Just now, it's a picture of my aunt, who is still improbably alive, with her great-grandmother, who knew Abraham Lincoln.

The past often seems impossibly distant, but really it's just around the corner.

When FDR was first elected, he went to pay his respects to Oliver Wendell Holmes, then retired from the Supreme Court. Holmes tried to make just this point to Roosevelt when he pointed to a sword hanging above the fireplace. "My g-grandfather used that in the French-Indian War." And then he regaled the new president with his grandmother's eyewitness account of Bunker Hill.

What an evocative post. Your comments suggest an entire novel about simple, slow, perhaps excentric rural lives being caught up in the changes of the twentieth century.

I love this house, and the randomness of its siding. But the picture with the man in the tricorne kills me. I wonder what he would think of its sunny yellow present?

Were screens used much in the 19th century? I actually have no idea but to me they seem more of a 20th century invention. A sign that our culture is getting 'soft' perhaps!