WE INTERRUPT OUR REGULARLY SCHEDULED PROGRAM...

...TO BRING YOU THE NEWS
Although we are having a rare day of full sunshine, the weather forecast has been, and remains for the foreseeable future, snow, snow, and more snow. Although there have been really a lot of storms, even by Maine standards, one can't fairly complain, because it turns out that all of you are suffering from snow---except for the folks down in Florida, and we don't want to hear any whining about a few chilly evenings.  It has been genuinely epic up here.  Yesterday, as 15 more inches got dumped on us in back to back storms lasting 36 hours, only the post office and two grocery stores were open---the rest of the village was shut down. 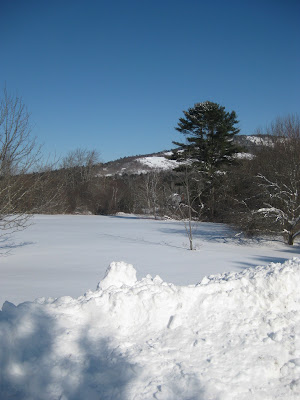 This is a view of the meadow behind my house, taken a few minutes ago.  Don't be deceived by the sunshine.  We've been having more than a foot a week of this white stuff.  Even with melt and settling, there are fully three feet of it on the ground.  In the background can be seen Blue Hill Mountain, which is really a hill, 78 feet shy of the official 1,000 feet required to make it a mountain.  Over the years, a few enterprising souls have erected rock piles to try to gain those few feet, but they tend not to finish.  Piling up 78 feet of rocks is a lot harder than it sounds.  In the foreground can be seen Dilettante mountain, the 6 foot high snow pile at the end of the driveway.  This name is to distinguish it from the six foot piles of snow at the entrance to the driveway, which are connected to this one by a smaller range of 4-5 foot snowbanks along the length of the drive.  I think of these mini-mountain range as my own personal Alps. The driveway definitely feels like a snow Mountain pass.  I know some of you will be tempted to say how pretty it is.  Save it.  Uh-uh.  Don't want to hear it.  Nope. 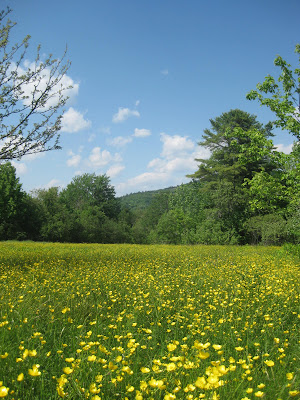 Just to make myself even more miserable, here is the same view, alive with buttercups, in late May of last year.  This is how the world is supposed to be...
And how do we cope with all this snow?  Who says we do?  I, for example, while stocking up on supplies, spotted a package of Betty Crocker peanut butter cookie mix.  And I bought it.  And I baked them.  And I ate them.  This is not the type of thing I'd usually do.  Oh No.  Not I ...I'd make them from scratch... 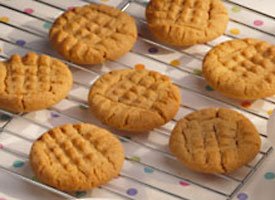 EDITORIAL PAGE:  I pretty much live for Thursdays and Saturdays, when Gail Collins appears on the Op-Ed page of the New York Times.  She manages to skewer the stupider moments in American politics---a wide open field these days---and she takes out her targets with lancer wit and surgical precision.  I recommend her take on the snow situation in today's paper.  That is I recommend it unless you aren't a left leaning commie pinko effete liberal like me, and/or  you have no sense of humor.  Then you might be offended.  Click HERE.   And as long as you're in The Times, check out the really great story about Margaret Russell's overhaul (long needed) of Architectural Digest, and the current state of shelter magazines, without which the Dilettante could not survive, HERE


LATE BREAKING NEWS FROM A ONCE-GREAT PAPER:  The Washington Post, the paper that brought us the Pentagon Papers, is perhaps not the news source it once was.  This week's Home section's lead story is that Pantone has announced it's color of the year, 'Honeysuckle', which many of us would call 'Pink'.  This news is two or three months old, having been covered by practically every design blogger and newspaper style section back when Pantone first announced it (replacing last year's Tiffany Box Blue, whose Pantone name I've already forgotten).  Way to go, Washington Post.  But, speaking of pink, that allows me to gratuitously insert this clip of marvelous Kay Thompson, author of the Eloise books, in Funny Face, when her fashion editor character decreed that Pink was the new color.


AND IN OTHER NEWS:  For those of you who haven't heard, as surprisingly neither the Times nor the Post covered the story, the Dilettante can now be read in New York Social Diary.  Thanks to all of you--and a special shout out to you, Little Augury--for all the kind words and compliments.  I am most grateful to DPC for this adventure, and to JH for making my words and pictures look so good.  More to come!
Beginning in April, I can also be read in Portland Monthly, as their new Antiques Marketwatch columnist.  Also, in their next issue, I will have an article about a bold mid-century design and art venture started up here in 1950---how mid-century can you get?---by the mother of architect Ben Thompson.
And that's all I've got today.  There's  a snow shovel and yet more aerobic exercise waiting for me at the store.  Fortunately, the cookies are all gone.
Posted by The Down East Dilettante at 10:51 AM

Congratulations on your new opportunities. Please be sure to remind/provide links for us folks in the hinterlands who don't always read those venues but who do appreciate your writing.

I am just snowed by all of this! Congratulations on everything but that white stuff.

Curious whether the Dilettante Socialite has electrical outages during snow season and, likewise, curious whether he keeps a generator there on Dilettante Mountain? I'm generally a good sport in life, unless the power goes out, what about you? We don't have snow, but we have epic storms regularly. I'm beginning to wonder about bringing a modest generator to this humble abode, having the computer as a comfort might humanize me during power outages.

So exciting all your new ventures. Many things to be delighted about to offset yet another upcoming storm!!

Wow - your view is spectacular (in the summer)! How lucky can you get. Love the run down and WHOLE HEARTEDLY agree on the washington post. I stopped reading it (and I live in washington...2 blocks from where it is written!). Now thats saying something

Sounds to me like everything is coming up roses! Congrats on the new gigs.

Mazel Tov on all of your new projects (except for the snow shoveling)!

Now the world will know the fabulousness that is Dilly.

The snowy scene IS pretty! Pretty and pristine and a bit awe inspiring. You can't afford to say it because your shops are closed and normally life is struggling. But I can afford to say it, sitting in the swimming pool and cooling down as best I can :)

I'm so sick of this snow. It's even more embarassing getting caught by the neighbors cursing the world talking to yourself while you shovel and sweat your ass off. I only wish I had peanut butter cookies to sustain me.

Well done on the NYSD appointment. I've been reading the archives of homes they've covered, which I find quite fascinating in a voyeuristic way. And now I have another reason to read it.

Snow drifts and cookies and Margaret Russell, oh my!
How nice to see your essay in the NYSD, too.

my favorite and my best- MFAMB to you said...

i don't see how you do it.. hats off to you for enduring such long winters.
that spring meadow is stunning. and i think, that maybe...it's bc of winter that we are able to appreciate that stunning may meadow.

i want to hop through it like a new born lamb.

With so many well deserved opportunities, you can be forgiven the slice and bake cookies! And you said you can't take pictures...the photos are beautiful! Congratulations neighbor!