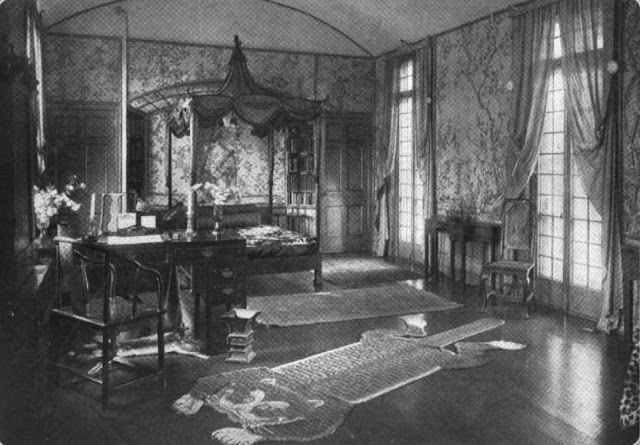 This morning, while paging through the 1920 edition of House & Garden's Second Book of Interiors, I passed many handsome rooms, most of which betrayed their time and place---typical Long Island country house drawing rooms, all correctly Georgian, stockbroker Tudor libraries, and Colonial Dining rooms.   Suddenly, the room above jumped out at me, and demanded a closer look.  It was something more unusual, rich, yet looser and more imaginative after the acres of floral cretonne and hooked rugs of most of the book.  Here was something bolder---a bedroom with drawing room pretensions---the furniture well chosen, loose and sparely arranged in the vaulted ceilinged space, long French windows, curtains freely draped, facing each other on two sides.  Old black and white photograph is deceptive.  My first instinct was that the room was likely in traditional Chinese export color schemes---all celadon and rose.   The bold Tibetan tiger rug should have clued me otherwise.  The caption describes something far more dramatic for this room 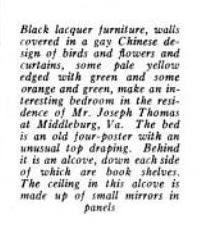 Okay, that got my attention.  I googled Mr. Thomas---the house was called Huntland (click HERE and HERE for more), and he himself was prominent in the foxhunting world in the land of silver stirrup cups and good English furniture.  How he came to have interiors of such imagination, or who did them for him, eluded me, but clearly he was a guy with some dash.

The Thomas bedroom room appears to be missing from the history of Chinoiserie interiors  in America in the 20th century, a body which includes the Chinese Room at Beauport, not published by House & Garden until eight years after the Thomas Room.  It is worth noting that Henry Davis Sleeper was one of the ushers at Thomas's wedding to Clara Fargo in 1915---perhaps he had a hand in the Chinese bedroom? 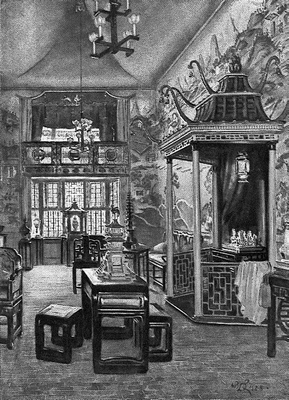 Or Conde Nast's ballroom, decorated by Elsie de Wolfe, with its famous set of Chinese papers from Beaudesert, an Anglesey family house in England.

And of course, the Chinese drawing room of 1930 at Henry DuPont's Winterthur House, whose wallpaper came from the same set as that in the Chinese room in Beauport.  The DuPont room is seen below in a stereoview as it appeared when the family lived there, from the Winterthur Digital Archives.


I was tempted to veer off to Middleburg with more about the Thomas house, but instead decided to contemplate some of the bedroom's spiritual descendants, such as Pauline de Rothschild's Chinoiserie bedroom at Chateau Mouton, as famously photographed by Horst for Vogue, below.  The same 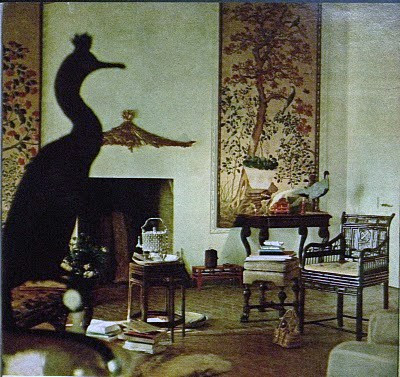 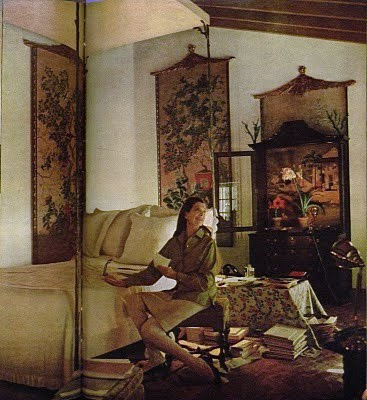 Or Nancy Lancaster's famous bedroom at Haseley Court.   One is tempted to wonder whether Mrs. Lancaster, in her own Virginia foxhunting days as Mrs. Field and later Mrs. Tree, had ever visited Huntlands and seen the glamorous Thomas bedroom.  Certainly her famous bedroom there, despite stylistic differences has much in common. 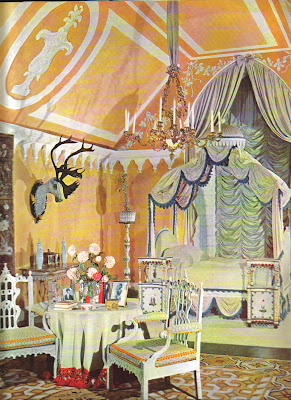 Last but not least, the longer I looked at the Thomas room, the more familiar the bed became.  And sure enough it is apparently the same bed for which Doris Duke paid $400.00  at a shop called The Flea Market in 1942, sold for many times that ($20,000 to be exact) at the 2004 Christies auction of her effects. 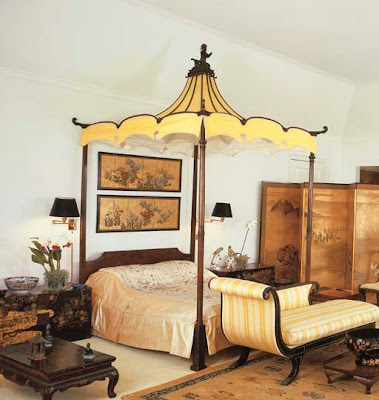 UPDATE: Perhaps I should have followed through on Joseph B. Thomas after all, for had I thought about it a moment longer---or not been so focused on dramatic bedrooms, the lightbulb would have gone off and I would have realized that he was the same Joseph B. Thomas who, inspired by Fenway Court in his native Boston, developed Beekman Terrace, the first luxury co-op on the East River, complete with gondola landing, and who was married to Wells Fargo heiress and muralist Clara Fargo Thomas, whose house up here is one of the epochal houses of the 1930's, and which I blogged about HERE

AND TODAY IN NYSD:  In 'House' I interview Michael Kathrens, author of  American Splendor, the Residential Architecture of Horace Trumbauer, newly revised by Acanthus Press.  Click HERE
Posted by The Down East Dilettante at 9:56 AM

Words can't express, nor emoticons convey, the
effect of this post on what up until now was a pretty
dull morning in Blogsville.

Thank you for your dogged research and an inspiring post. Now I'm ready to redecorate!

This, Dilettante, if you ever think of giving up blogging .... G-d help us both!

Hello! Just wanted to say thanks for linking to Full Cry: A Hound Blog's post about Huntland and its kennels, with the great old photos provided by Karen L. Myers. Your post about the Thomas Room intrigued us, and I'd like to link back to it so our readers--familiar with Thomas as a foxhunting man and a truly wonderful author on the history of hunting with hounds--can also take a peek inside the room. Many thanks again for pointing to us so we can share in your great post!

Your sleuthing abilities are amazing! Wonderful post! Thank you!

What a mind, and for that matter memory, you have! This was marvelous. I ditto any comment that basically says you may never give up blogging. And that's that. M.

A very chic bedroom indeed. Although I love the tall windows and the proportions of this and the other rooms in general, there is something a bit off with the architecture that is corrected here by this magnificent wallpaper that pulls it all together beautifully.

this is totally FABULOUS! A remarkable detective as always. Can you imagine finding a bed like that for a mere $400? I would be so incredibly excited!

Sometimes, children, your Uncle Dilettante is not as clever as you give him credit for. If he were, I could have tied up all Six Degrees of Joseph Thomas in this one post. Had I thought about it, I would have realized of course that he was husband of muralist Clara Fargo Thomas, and there would have been no mystery about the stylishness of their bedroom, for Thomas was the developer behind Manhattan's famously glamorous River House---and his wife built one of the finest modern houses in the country, not 30 miles from where I sit (this link takes one to my post about that house: http://thedowneastdilettante.blogspot.com/2010/01/modernism-in-maine-clara-fargo-thomass.html )

He married her in 1915, but he bought the house long before. When do you think this room was built and/or put together? After 1915 or before?

(I confess I can't tell anything from the various references to "expansions," but from the windows I assume this was not an original part of the house.)

P.S. As for the bed, if the people at NYSD can't figure out how Doris Duke could have fit in it, how could we imagine her and Rubirosa in it as well? (Well, part of Rubirosa.)

Thomas first arrived in Middleburg in 1905, purchased Huntland in 1911, married Miss Fargo in 1915, the room was published by 1919. Good question. It would seem in a room so theatrical that her hand, as a scenic designer for the stage, must have been present

As to DD and PR and his parts in bed---hey, this is a family blog!

Here's one last, family-friendly picture of the bed before auction day --

I really enjoyed this post as well: it got me thinking about bedrooms as LIVING rooms..and I'm still thinking.

In the 18th century, bedrooms were used to recieve guests, hence the decoration?

The rug in the foreground is something I've never seen before...hmmmm....

What a great post. But here's my question: how do wonderful things like the Thomas' bed end up at a joint called the Flea Market in the first place? The slow decline of things' station in life, as fashionable styles slip from favor, is surely as interesting a story as that of their eventual (one hopes) recovery. Either way, I'm glad it finally the bed had a graceful landing.

And I think that's a pretty good guess about the possibility of Henry Sleeper's having a hand in that decor.

You could not possible be expected to recognize the bed right away!! How old are you anyway!!!??!!

You are totally amazing and brilliant.....and know way too much for your age!

(you must keep your elders in mind.....and not embarrass us!)

I will brag right now. Just for a moment.

What I am telling you; is this: I saw that room in black and white and the mirrors over the bed alcove with bookcases on the side....and

Henry Sleeper leaped into my head! It HAD to be him! I would bet a million dollars!~No one else could possibly have thought of all of that at once!

Chinese wallpaper (viney and light ) not so populated as at Beauport and Wintherthur.......the mirrors......(no one but Henry would have thought of that THEN!!)

The reason that Doris Duke found it in the thrift store is that no ones ancestors (lots of times even children) know the value of anything! And so the
Goodwill, or the Salvation Army, or some charity picks it up. " And there it is!

Doris knew what she saw! And she bought it!

I know the feeling! I went to a "charity sale" looking for a rug for my "Auntie Clare's apartment"!

There it was, lying in the dirt.

the volunteers had not known its value.....so I was able to sell it to my client for half of its appraised value.

That is a very long way to say how that bed ended up in a thrift store.....and how Doris was able so see such a treasure!

Had to be Henry!