I RISKED MY LIFE TO TAKE THIS PHOTOGRAPH 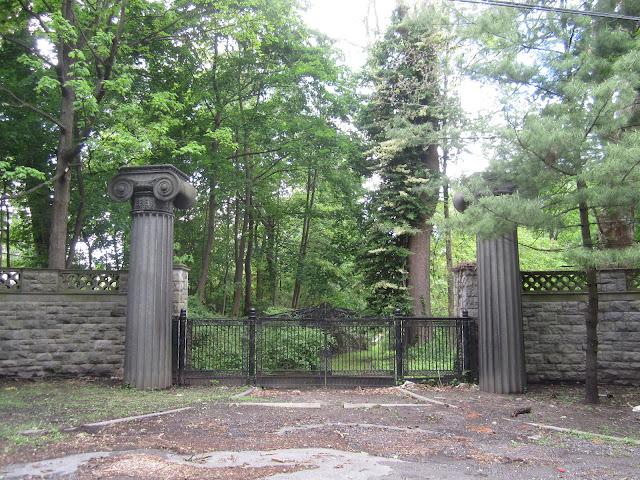 No, seriously, I really did, although undeniably the bar lowers for what can be considered dangerous risk in late middle age.  No derring-do on ocean sailing boats, no climbing of sheer cliffs.  No, what I did was merely park illegally for five minutes and stand in a narrow traffic island in the middle of speeding commuter traffic (those suburbanites do love to drive their Audis at inappropriate speed in inappropriate locations) on Rte. 9 in Scarborough New York, all in order to photograph this amazing gate, which I've admired for years.  No false modesty about the builder of this Brobdingnagian construction. 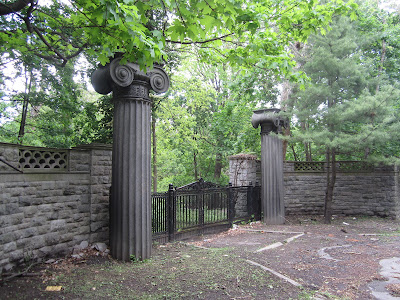 I spent three days last week in the Tarrytown region of the Hudson Valley, researching various Maine homes of a certain family who,  after striking it rich in oil, loaded up their truck and moved to the Hills of Pocantico.  The Hudson valley has always been one of my favorite outings, combining as it does world class scenic grandeur, a romantic history and one of the country's great and varied collections of domestic architecture.   Despite the steady march of Dry-Vit and office parks, the Sleepy Hollow neighborhood around Tarrytown and Scarborough in the lower valley still offers much to see, not the least of which is this dramatic gate on Broadway, as the confusing network of routes 9 are often known on their run up the valley. 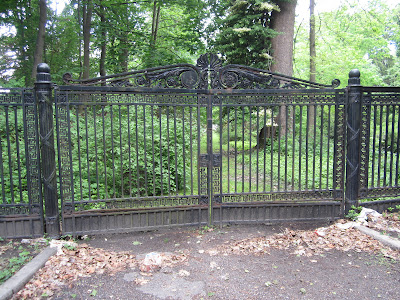 It is the former entrance to Beechwood, an estate originally dating to the 18th century.  The gates were commissioned in the early 20th century by the estate's then owner, Frank Vanderlip, one of the powers behind First National City Bank.  His architect was Rockefeller family favorite William Welles Bosworth, a Beaux Arts trained designer with a special talent for cold, cerebral evocations of the drama of ancient Rome and Greece.   For the reader who has never passed these gates, it should be mentioned that the scale is imperial.  Although the beautiful Grecian inspired iron gate is kept low to increase the dramatic effect, low in the case is actually around eight feet high at the crest, and the superb columns, rescued from a great demolished 19th century New York building---I once knew which, the answer now eludes me---are well over twenty feet.  Mr. Vanderlip must have felt like an emperor, or more aptly, Croesus, when he arrived home after a hard day of counting piles of money. 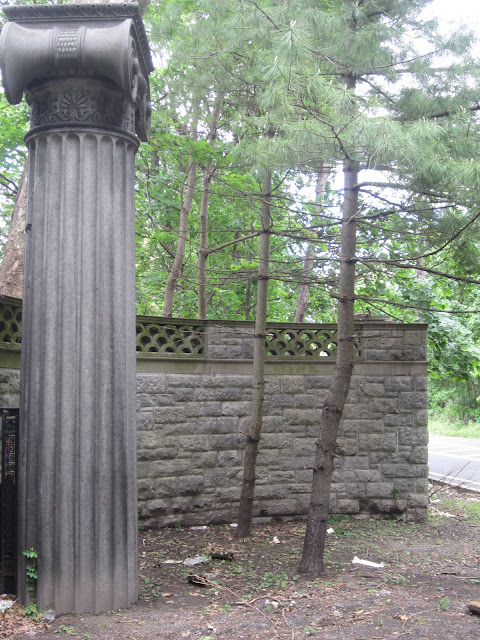 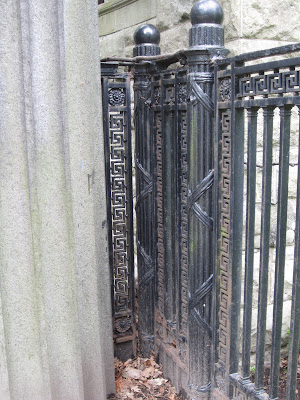 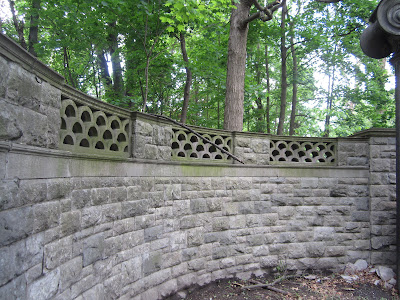 Although the gate is abandoned, the estate itself is condominums, and kept in good order, including the Roman gardens and pool added by Vanderlip, also designed by Bosworth.  The house, originally a relatively simple structure built in the 18th century, was repeatedly enlarged through the 19th and 20th centuries, is one of those places where degrees of separation abound.   The estate was purchased in the late 19th century by H. Walter Webb, a vice president of the New York central, whose brother, Seward, married the boss's daughter Lila, whose sister Margaret Vanderbilt Shepard owned the estate across the street by McKim, Mead & White, now the Sleepy Hollow Country Club.  Webb's widow, Leila Griswold, married Edith Wharton's partner in decorating crime, the confirmed bachelor Ogden Codman, whose first big  job had been for Margaret Shepard's and Lila Webb's brother Cornelius in Newport.  And so it goes.

The early Vanderlip years in the 20th century were the estate's most most glamorous era.  Intellectually inclined, Narcisse and Frank Vanderlip built a Montessori school and private theater (above) also designed by Bosworth, on the grounds for their and the neighborhood children.  The students later came to include those of John Cheever, who rented a charming studio house on the estate in the mid-20th century (Susan Cheever would return there briefly as a teacher).

By the 1970's, semi-abandoned, the mansion itself became the setting for Merchant-Ivory's first production, Savages.  As with all their movies, the set is the star, and James Ivory's memory of that shoot (click HERE, pg.7) is worth a read.

UPDATE 1:  An esteemed and ancient reader with sharp eyes sends THIS LINK to a Gant commercial filmed at Beechwood.  Would that I looked so lean and fit in my seersucker jacket :-(

UPDATE 2:   One of the pleasures of blogging is that if I don't know it, surely a commenter will (thank-goodness).   The columns, whose origin I couldn't remember, were salvaged from the old New York Customs House designed by Isiah Rogers at 55 Wall Street in 1836-42.  After the Customs house removed to Bowling Green, the building was taken over by Vanderlip's National City Bank, remodeled by McKim Mead & White.  Vanderlip had two of the columns, four stories high and turned from single blocks of Quincy granite  Think about what I just wrote.  Single pieces of granite.  Not the pyramids, perhaps, but a fairly huge engineering feat for the time..   No less amazing is that two stories of the columns' height is buried below ground in their current location.

Posted by The Down East Dilettante at 9:56 AM

I'm so glad you didn't get run over! Thanks for risking all to give us the splendid view of that entrance. Of course, with my love of Greek keys, I zoomed in on the details of the gate, which is a fine complement to those columns. It's good to see a classic structure like this still in good care.

Nice post. Thems be fine gates, yessiree. Never seen them, but hope to one day. Beechwood looks to be in pretty good shape, it appears.

I had visited Beechwood in the 1980s before it was converted to Condos.
I met the caretaker who said the columns were from the bank that Mr. Vanderlip ran. The first National City Bank on Wall Street. He even said that they are full size from the building and that half of the length is buried in the ground. An interesting mystery, but if you look at 55 Wall Street, they seem to be the same, http://en.wikipedia.org/wiki/55_Wall_Street

great shot of the gates and half columns (what strange proportions!) the house looks wonderous. Too bad it was converted but it would be interesting to see how it was done and if any of the grander rooms were left unchopped.

In the 1920 edition of House & Garden's Book of Interiors there are few pictures of Bosworth's over the top grecian architectural fantasy apartment. One of the those "studio" double height spaces with a giant 15' tall Tennessee marble Ionic columned fireplace, replete with plaster draped walls and all the furniture by Bosworth. A grecian "couch" style sofa and a white polar bear rug... very Schinkel meets Hadrian's villa in the sky somewhere in NY.

Link to those pictures here---Schinkel meets Hadrian's villa is spot on:

We all have to go somehow, but I'm glad you lived to tell the tale - and show these great images. At first glance, I was a bit thrown by the proportions presented by the half-buried columns, but the unexcavated Piranesi-like quality of it does lend more than just a little drama.

Memo to the Beechwood Homeowners' Association:

Re-paint the gates right now. Not next year, this year. It will be cheaper.

what an unusual gate -such a great repurposing! I'm glad they survived. A pity the condo owners don't use this entrance!

Those columns are indeed fit for a King. I'm popping up to watch the video. I thought you might be interested in reading about The Reynolda Estate in Long Island. I posted Friday. Love your writing!
Best,
Liz

Buried or cut? I do so hope buried!

i love the intertwined connections that this grand house once had.

DED -
In keeping with your request I address your NYSD interview here. The conversation needed direction and focus so nothing wrong that I can see. If there is more that couldn't be published on NYSD could you publish an unabridged version here?
Can't get enough Trumbauer. I have the old version of American Splendor - what other houses are featured in the new version that are not in the old one? If it includes Charleton Hall or the Clews house I may have to buy a second version. ouch.

I was fascinated by this entrance when you posted it a few weeks ago and last weekend saw it in person as I was on my way up to Hudson.

Chip, there is a longer version

I pass this every single day and have often wondered what in the world could be / would have been going on behind those gates. SO nice to finally know. It seems that one of the condo units is currently for sale (for an obscene amount). Would have loved a tour of the estate. Great share!

If you haven’t found out where nonetheless, protect dealing with. Don’t determine. consists of purchase t shirt screen printing