BACK TO DORCHESTER--THE AMERICAN SAPPHO, CHARLES BULFINCH, AND A LITTLE MORE OGDEN CODMAN

Since writing last week about Hepzibah Swan's French-inspired pavilion in Dorchester, Massachusetts, I've been thinking about curves and ovals in Federal architecture.
Although American architecture had started breaking out of the square box as early as 1772, when Thomas Jefferson designed an octagonal bayed pavilion as the first house at Monticello, the movement toward more innovative room shapes did not begin in earnest until after the Revolution. 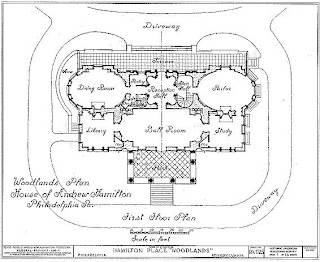 In 1788, William Hamilton built a house in Philadelphia with the earliest known surviving oval rooms in America, in a complex plan probably derived from an English pattern book. The curve and the octagon did not fully enter the American design vocabulary until 1792, when James Hoban won the competition to design the new President's house in Washington, with its garden room centered on an oval bay fronting three oval rooms, each above the other.
The new fashion traveled quickly through the major cities, but nowhere did it gain foothold than the Boston area, where many country houses, beginning with Charles Bulfinch's Joseph Barrell mansion in Charlestown, in 1792.
These houses were built by the city's new plutocracy, the men and women who had come to prominence during the revolution, and the early years of the Republic.  Their portraits were painted by Gilbert Stuart, their houses were often designed by Charles Bulfinch, and they led the stylish aspirations of their day.
Within the next decade, at least a dozen houses with garden facades centered on a curved or octagonal bay were built in the countryside around the city, and in town, the bow front brick town house, first introduced by Bulfinch, became the most enduring architectural symbol of the city.
It was against this background that Mr. & Mrs. Perez Morton, he a lawyer, she a descendant of one of Boston's most distinguished families, the Apthorps, built their country house in Dorchester, practically across the street from the Swan's fashionable concoction.
Although under construction at the same time as the Swan house, the Morton house was less fashion forward than the former, its facade centered on pairs of engaged pilasters supporting a traditional pediment.
To the side was an extraordinary complex of stables and outbuildings, all adjoining---the ultimate example of the famous New England paradigm of 'big house, little house, back house, and barn', in which all services are connected under cover, from main house to privy to stable to wood house, that one might not have to brave snows and drifts to attend to the various functions of life.  In this, the New England houses may be thought to have a direct link to the Italian farm villas.
At the rear, an octagonal bay projected from the house, containing both an oval salon with a chimney piece imported from France, and an upper veranda, a simpler echo of the upper portico at the Barrell house.


The Morton house is sometimes attributed to Charles Bufinch, who was Mrs. Morton's cousin, and he may well have advised, but Mrs. Morton herself wrote that the house was designed to her own 'whimsical plan'.   Sarah Wentworth Apthorp Morton was a woman of considerable talents.  Well educated, she wrote verse as a child, and in 1789, at the age of 30, she began contributing to the 'Seat of Muses' in Massachusetts Magazine.  Her books of verses came to include Ouâbi: or the Virtues of Nature. An Indian Tale in Four Cantos, 1790, and The Virtues of Society. A Tale Founded on Fact, 1799, as well as an anti-slavery poem, The African Chief.  Mr. Morton, like his exiled neighbor across the street, appears to have had a caddish streak, and had an affair with his sister-in-law, which did not end well.
The interiors of the Morton house featured elaborate Adamesque plasterwork ceilings, a relative rarity in the United States.  The slightly awkward oval room featured a coved ceiling, also unusual, and a less sophisticated echo of the Swan's domed circular room across the street.  According to early accounts, the friezes over the doors featured swags centered by American eagles and shields, a first floor room in the octagonal bay had Zuber scenic wallpaper, and the 'sky parlor' in the attic monitor was a room about 10 x 16 feet, with corner fireplace with delft tiles, and windows on four sides looking out to the gilded dome of the State House Boston and the harbor and bay beyond, all now gone.

As he did with the Swan's house, Ogden Codman later mined the Perez Morton house for inspiration for one of his designs in Newport, this time for his cousin, Miss Martha Codman.  Miss Codman's house, Berkeley Villa, was an amalgam of several iconic American houses around Roxbury and Dorchester.  The entrance facade was based on the Crafts house designed by Peter Banner in Roxbury.

As Berkeley villa was much larger than its model, and required an attic story for servant's rooms, a steeper roof line was based on Shirley Place, the surviving Royal governor's mansion, also in Roxbury, both drawn by Codman as part of his study of early American houses in the 1890s.

For the garden facade of Miss Codman's house, the octagonal bay and porch of the Morton house were copied.  Charming though the 'authentic' Federal style facade might have been, this house was in Newport, after all, and for the interiors, Codman abandoned the simplicity of late 18th century America in favor of Robert Adam's England, inserting a rotunda stair hall in the center of the house.

In 1928 Miss Codman married Maxim Karolik a Russian opera singer, and together they formed one of the finest collections of American furniture, with which they furnished Berkeley Villa.  That collection is now a cornerstone of the American decorative arts collection at the Boston Museum of Fine Arts, where of course, also resides the French furniture brought back by James Swan years earlier.

These blog posts are, as much as anything, just me thinking out loud about things that intrigue me, and making connections.  I could go on and mention the garden house (click HERE) designed by Fiske Kimball in 1922 in the grounds of Berkeley villa, that copied one designed by McIntire at Elias Hasket Derby's country estate, and that Kimball in turn was the man who first wrote about Thomas Jefferson's architectural life, as author of the seminal book on McIntire, and that Kimball in turn lived for a time, as director of the Philadelphia Museum of Art, in Lemon Hill, a house built in 1800, with central bow and oval rooms, or I could just go make lunch.
Posted by The Down East Dilettante at 3:58 PM

I love rooms with a shape other than a square or a rectangle and always have at least one classical shaped space, though sometimes just a small one, on every project. These shaped rooms are not usually expressed on the exterior, however, as I like them to be a surprise. And of course it is always a benefit when at least some of the furnishings compliment the style and geometry of the architecture.

Wait -- the Morton house, as well as the Swan house, was built on a berm?

(I'm sure Dilettante will get to the bottom of this -- even if it's only a long-buried Dorchester stream, running through the neighborhood.)

Hello:
We are gratified that some of your time at least is spent writing down your thoughts, as opposed to preparing lunch, for if that were not the case, then we should be deprived of so much of interest!

The possible connection which you cite here between New England houses and Italian farm villas is fascinating, as is the way in which the design of one house influences that of another. Indeed, is any idea totally original?

Great post. That second story, oval drawing room with the unusual ceiling was just gorgeous. And even though the exterior of the Codman place didn't impress me too much, wow, what a wonderful stair hall!

DED, I love the way your mind works; the way you're always making these connections. This post caused me to make an unexpected connection of my own. I had never heard of Sarah Wentworth Apthorp Morton before, but both her home and her maiden name rang a bell with me, vaguely. The pilasters and central pediment on her home sort of reminded me of a colonial house (razed long ago) which I'd once seen on the New York Public Library's website...and had fallen in love with immediately. Located on the upper west side of Manhattan, it was originally called Elmwood but later became known as the Apthorp Mansion. So, I thought to myself, could Sarah Wentworth Apthorp Morton of Boston bear some relation to the owner of New York's Apthorp Mansion? Well, it turns Elmwood was in fact the country seat of Sarah's loyalist uncle, Charles Ward Apthorp. Thank you, Google.

And here are some old pics of that New York house, just in case anyone is curious:
http://commons.wikimedia.org/wiki/Category:Apthorp_Mansion

Ancient---interesting observation. I think it is strictly a by-product of fashion. However, In an 1890 article 'Some Old Dorchester Houses', the writer mentions a sandstone ledge upon which the Swan house is built

J&LH, it is interesting isn't it, that very different climactic and social conditions should nevertheless lead to the same sort of interconnected buildings and functions?

Anonymous, good call about the Apthorp house (how amazing it is to me that a few pre-revolutionary country estates still survived with Manhattan closing in all the time. If you want to carry the connection further, the Apthorp house in New York is sometimes attributed to Peter Harrison, who also designed Shirley Place. And for Sarah's uncle's house in Cambridge, here is another link: http://www.cambridgehistory.org/Cambridge%20in%20the%20Revolution/Apthorp%20House%20edited.html

And I am thinking of Dumbarton House in Washington. . .

I've finally had some time to read this through properly. Dilettante, I learn so much and with such enjoyment! Excellent post!

I can't believe anyone would demolish a home like the Morton House. What a loss.

Another noteworthy Federal house with an oval rooms include the Third Harrison Gray Otis House on Beacon Hill (the oval ballroom is on the side of the house - it now pushes into the adjoining townhouse that was built later). Also quite important examples of oval rooms are at Gore Place in Waltham, Mass., Lemon Hill in Fairmont Park, Philadelphia), and Montpelier in Thomaston, Maine.

It would be cool if you could take a home artist from the 1900's and bring him into this world today. It would cool how he could design homes with new materials and new tools but still keep that classy retro look.