"Red-flannel shirts should be worn in the woods, if only for the fine contrast which this color makes with the evergreens and water"

It has ever been thus 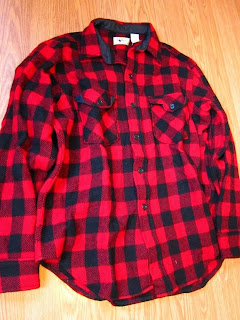 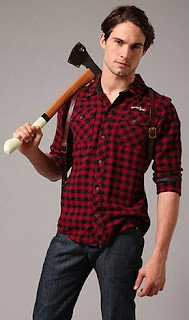 "Red is the great clarifier - bright, cleansing, revealing. It makes all colors beautiful. I can't imagine being bored with it - it would be like becoming tired of the person you love. I wanted this apartment to be a garden - but it had to be a garden in hell."

Thoreau made this foray into fashion advice after his journey to the Chesuncook wilderness in 1853,where he stayed in a log cabin like the one below, and at a public house, whose unexpected presence led him to observe:

"Before our companions arrived, we rode on up the Moulton Road seven miles to Molunkus, where the Aroostook road comes into it, and where there is a spacious public house house in the woods.  There was no other evidence of man but this huge shingle palace in this part of the world; but sometimes even this is filled with travelers.  I looked off the piazza round the corner of the house up the Aroostook Road, on which there was no clearing in sight. There was a man just adventuring upon it this evening in a rude, original wagon, a mere seat with a wagon swung under it.  Here, too, was a small trader who kept a store in a box over the way, behind the Molunkus sign-post. I saw him standing in his shop door. His shop was so small, that, if a traveler should make demonstrations of entering, he would have to go out by the back way and confer  with his customer through a window about his goods. "
11 years later, in 1864, the year in which the above description was published in The Maine Woods, the hotel  described by Thoreau had been supplanted by a new tavern, the Chesuncook Lake House.  In 1882, another traveler, Thomas Sedgwick Steele traveled up for the fishing, and in his book about the journey, Paddle & Portage: From Moosehead Lake to the Aroostook River, he left his own impression of the accomodations: 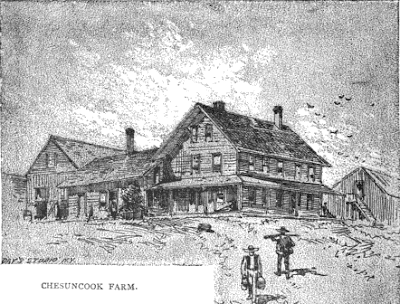 "There is a farm upon this lake It consists of a wilderness of ground and a collection of rickety sheds clustered like barnacles to a major pile which you suspect to be the homestead There is nothing pretentious about the architecture It is of a rather complex order and the span of life never seemed to me so short as at the moment I attempted to determine it Such a view of angles horizontals and perpendiculars never before greeted my eyes It was simply distracting The designing genius must have suffered with a cast in his eye or a mind disordered through indigestion   These farm buildings stand alone in a large open tract.of country.  The sight of them strikes you instantly as strange and unaccountable At first you wonder and half believe yourself in the vicinity of Ararat and a debilitated ark Then you shudder and give thought to a terrible suspicion a small pox hospital perhaps Finally unable to reach a plausible conclusion you forget you are in Maine and in generous sympathy with the glory awarded to all the super dilapidated buildings of the lower states declare at once that the pile must be the old headquarters of General Washington "

The Chesuncook Lake house still operates today.  The population of Chesunccook village, in the last census was 10 (Ten), all of whom, we hope, wear red flannel shirts.
Posted by The Down East Dilettante at 12:36 PM 7 comments: