VARIATIONS ON A THEME: ROUNDING A CORNER

From early 19th century America, when builders and designers were almost incapable of designing an ugly building, a little riff on how design ideas traveled, in this case from the urban centers to the little seaport of Portsmouth New Hampshire.  I sometimes just enjoy pondering these things out loud--and find that even 200 years ago in Federalist America, with travel primitive and distances remote, the degrees of separation rarely added up to six.

Posted by The Down East Dilettante at 3:59 PM 8 comments:

Where would a Dilettante be without his readers?  Tracing design sources is a great interest of mine, but sometimes the answers elude me.  When I mentioned in last week's post that the remarkable bed of former Red Sox owner Thomas Yawkey rang a faint bell, but I couldn't remember why, Toby Worthington stepped up to the plate, as it were, with the answer: 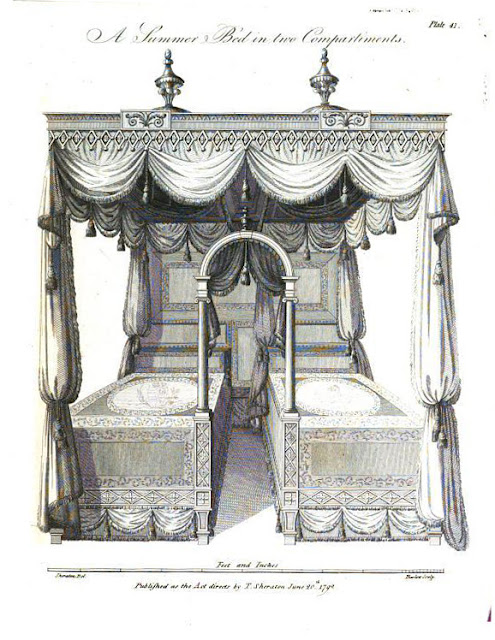 The Yawkey bed was based on plate 41 in Thomas Sheraton's The Cabinet Maker's and Upholsterer's Drawing Book, published in 1791---"A Summer Bed in Two Compartments". (above)


Sheraton, along with his near contemporary Thomas Hepplewhite, and the earlier Thomas Chippendale, was one of the three great furniture designers (four, if one counts the architect Robert Adam, who often had Chippendale execute his designs), and like the others, spread his style and fame by publishing pattern books that could be used by other cabinetmakers. 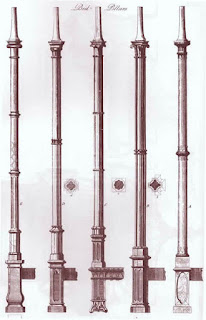 Just as with the architectural pattern books of the era, like Asher Benjamin's American Builder's Companion, these books provided suggested designs, often with mix or match options, along with rules for achieving correct proportions, that helped many a provincial cabinetmaker turn out pieces of compelling beauty, rarely making a wrong move. 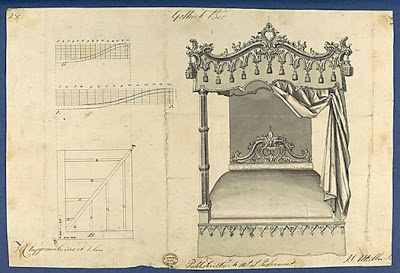 The Yawkey bed does not appear to be antique in the photos, but rather a decorator's inspiration carried out by a talented cabinetmaker.   Rather than the neo-classical design of Sheraton's bed, the rococco cornice details are earlier, and more Chippendale in inspiration. as seen in the plates above from Thomas Chippendales The Cabinetmaker's Directory.

Readers may remember the Chinoiserie bedroom in 'Huntland', the Joseph Thomas house in Virginia, with its dramatic bed later owned by Doris Duke, the design taken directly from plates in Chippendale's Directory. 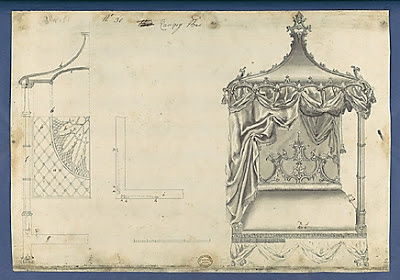 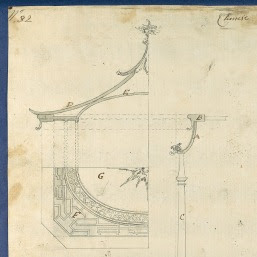 Posted by The Down East Dilettante at 8:33 PM 8 comments:

Posted by The Down East Dilettante at 11:48 AM 1 comment:

I really don't know from baseball.  I once made a home run during a mandatory softball game in elementary school---but only because I was being chased by a big mean kid determined to ensure that I did (I don't know how that plays out in official rule books).  As for baseball in general, I think Roger Angell is one of the finest essayists writing today, but I've never gotten all the way through one of his baseball pieces in the New Yorker---I intend to, I'm seduced by his elegant prose and love of subject, but somehow, next thing I know, I'm in the movie reviews. On the other hand, if none of you have read his autobiographical Let Me Finish, stop reading my scribblings right now and go order a copy--or better yet, order a copy from my favorite bookstore.  Coincidentally, the next and only other time I ever managed to swing a bat and have it hit a ball, was about 35 years later under the tutelage of the very same bookseller, who refused to believe that I lacked the coordination to properly swing a bat (he believes me now)  As I remember, the bat was a green plastic one belonging to his then young son.  I swung the bat per instruction, concentrating on making contact with the ball, and to my astonishment did make contact. The bat went crack, and so nearly did the ball, as it missed his young son's head by a quarter inch.  After that, I permanently retired from baseball and stuck to the sports I excel at---Olympic picture book browsing, competitive cookie eating, extreme lawn mowing...

So what brings me to baseball this morning?  After all, I concern myself on these pages mostly with matters of decorative arts and design, and human foible, not sports--otherwise, I would have a few tart things to say about Lance Armstrong and Manti T'eo,

Anyway, getting to the point, I was wandering through the Gottscho Schliesner archives on the Museum of the City of New York website, when I came across a couple of photos of Tom Yawkey's New York apartment, at 992 Fifth Avenue, taken in 1935.  I vaguely remembered Yawkey as having something to do with baseball---and a quick trip to Wikipedia later, found that he was a mid-western lumber heir who realized his big dream---to own a baseball team, no matter what it cost him, which over the years was apparently a lot---at very least enough to finance several ballet companies, a new opera at the Met, and perhaps the restoration of the entire downtown of a dying city, or send thousands of underprivileged kids to college..   One thing certain from the pictures, is that the money wasn't spent on the decor.  His dining room, with its stolid portrait, of Mother Yawkey, no doubt, and its very ordinary Grand Rapids dining room furniture in the Hispano-Tudorbethan vein, certainly lacks the chic or glamor one associates with fine New York apartments of the era. 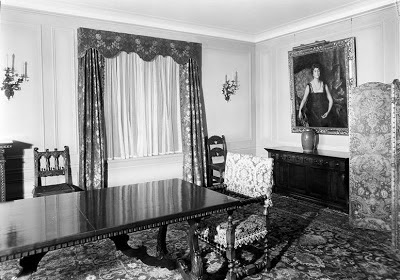 No, what caught my attention was the bed in the master bedroom---an astounding pale confection of two twins beds, joined by an archway under a vast floating canopy inspired by the works of Mr. Chippendale.  Quite something, no?  Just what does that gate symbolize? 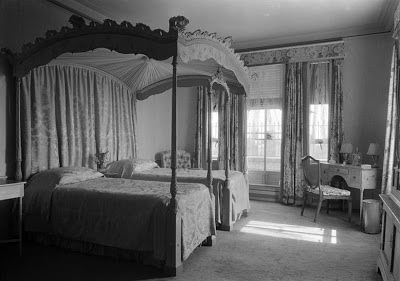 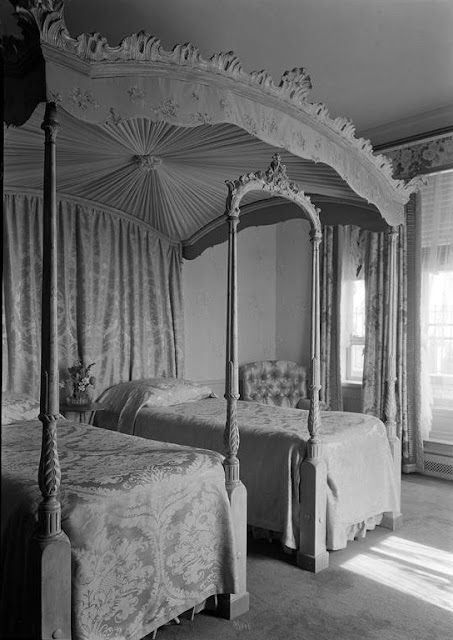 Stubbornly lodged in the back of my overstuffed brain, I know somethign else about this design---or at least it reminds me of something---but it isn't coming to me.
Posted by The Down East Dilettante at 12:48 PM 5 comments:

In the early 1900s, when Bar Harbor socialites were  not busy evoking Marie Antoinette's France or Gainsborough's England, they channeled ancient Greece.  The Dilettante tells you why in today's New York Social Diary. 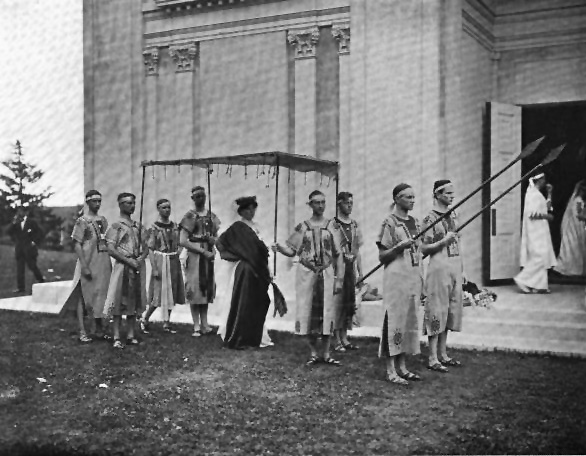 Posted by The Down East Dilettante at 10:09 AM 4 comments: