For example, I've had this illustration, from American Architect & Building News, on file for years,  Designed by James Brown Lord for one Mrs. S.K. Henning. Not much evidence that it was ever built, but curious, I persevered.  Even in the age of Google, one has trouble finding much about Mrs. Henning.  Her first name was Sarah, neither husband nor source of fortune are mentioned, and her social life seems to have been led mostly  Tuxedo Park-Bar Harbor over a brief few years before and after 1900. 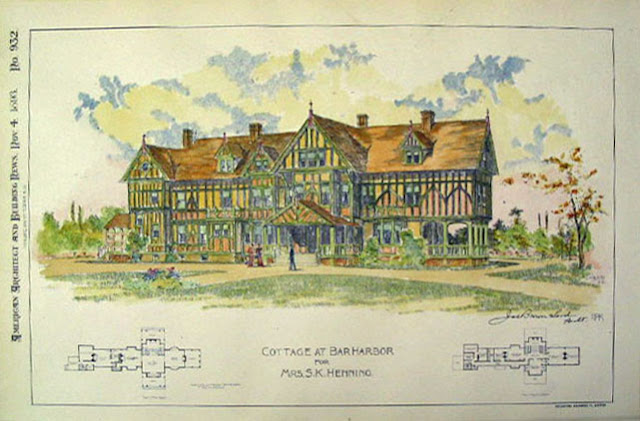 I pursued a few leads.  I found Mrs. Henning in the Bar Harbor cottage directory as a guest at one of the hotels in 1893.  Then I found this house, built for James Henning in 1895 in Tuxedo Park, James Brown Lord, architect.  Not the same design, but certainly similar. 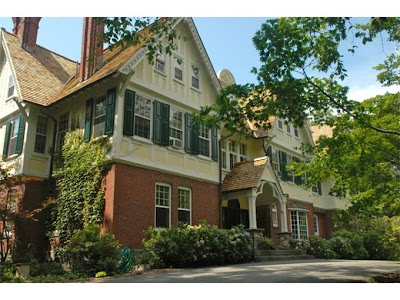 At that point, one assumed that perhaps Mrs. Henning was married to James Henning, and that they decided to build in Tuxedo instead?  At any rate, nowhere in available collections did any larger amount of material appear to exist that would fast-track the Henning cottage into the book, and I moved on.

Since then, the old Bar Harbor newspapers have become available digitally, and a few weeks ago, in pursuit of other information, I came across a mention in the Bar Harbor Record of June 1894 which announced that Mrs. J.H. Henning of Louisville, Kentucky and her two children were guests at the St. Sauveur Hotel while their new cottage on Cleftstone Road was being completed.  Hmmm.  But where on Cleftstone Road, and was it the house shown in American Architect?  This of course, is where your completely undisciplined Uncle Dilettante strays off the path he's supposed to be following, and true to form, I wandered off to find more.  A quick search turned up an article about Mrs. Henning's new cottage, describing a house nothing like the one designed by James Brown Lord, which obviously hadn't been built.

A few days later, again while not looking, I ambled across a longer article about the new Henning Cottage, whose architect was Sidney Stratton (the actual subject of that particular search), who shared office space and occasionally worked with, McKim, Mead & White, and designed a house that will be in the book.

The article was accompanied by a crude wood engraving showing the new house, called 'Air Castle', into which Mrs. Henning and children moved on August 01, 1894.  A further search finds the family in residence for the 1895 season, and then they disappear from the face of Bar Harbor, consistent with the 1896 completeion date of the house in Tuxedo Park, completed in 1896.  One has no idea why they departed Bar Harbor so quickly, after having tried it out for a couple of seasons then having built a large cottage only to sell it two years later but there you have it.  On the 1896 Bar Harbor map, the cottage appears, renamed 'Hillhurst' and owned by one Helen Seely (for those of you who protest that the shape pictured is not consistent with the house pictured, let me assure you that on the more accurately delineated 1904 map, it does appear correctly). 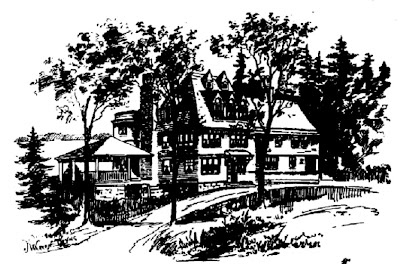 And there this post would end, except that a few weeks later, I was flipping through an old Bar Harbor guildebook, with pictures of cottages, when what should appear but the engraving below: 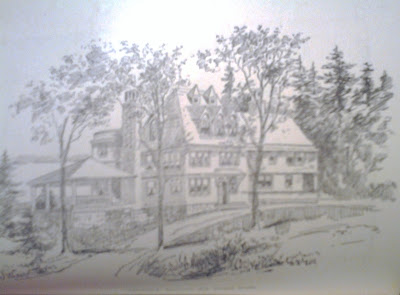 The problem?  In the guidebook, the picture was captioned as 'Cottage at Bar Harbor, designed by Andrews Jaques and Rantoul".

I'm resisting further research.  I have a book to complete.

P.S.,
Speaking of Tuxedo Park, after finishing research at the wonderful Walsh History Center at Camden Public Library, I wandered around looking at buildings (I still haven't put the final nail in my Camden selections. (Sssh, don't tell the publisher), and while wandering around town, I spotted this new little shingle style cottage, which reminded me of something...(and yes, that picture was taken yesterday March 23, the 3rd day of Spring, or as we call it up here, 'February II, the Nightmare Continues') 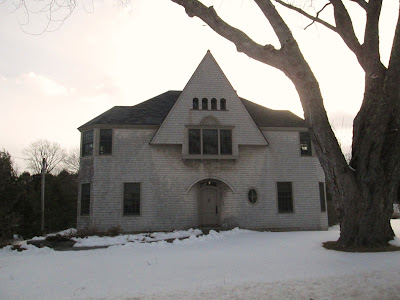 But enough about the weather---certainly we've had enough---the reason that the house looked so familiar is that it was clearly inspired by one of the original houses in Tuxedo Park, Bruce Price's Travis Van Buren cottage, below. 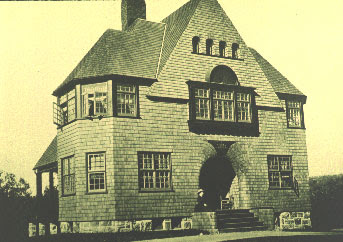 We are embarking on Week III of not particularly cold (for March), but very gray and dreary weather---rain, drizzle, freezing rain, freezing drizzle, dry snow, wet snow, snow mixed with rain and drizzle, rain and drizzle mixed with snow You get the idea.  And the mud!  Oh the mud!  Maine practically depopulates from mid-March to mid-April, and with good reason.  The winter won't kill you, but the spring damn well might.

In the interest of public health, I declare this to be Garden Week at the Down East Dilettante, and in denial, will post nothing but pictures of gardens until this ends. 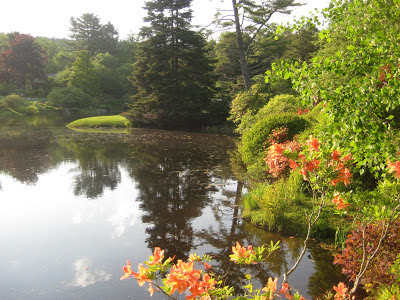 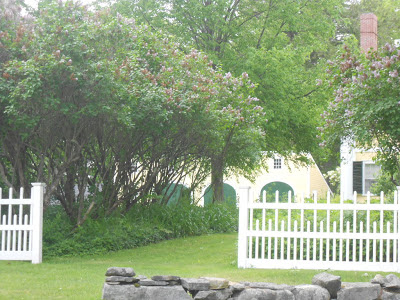 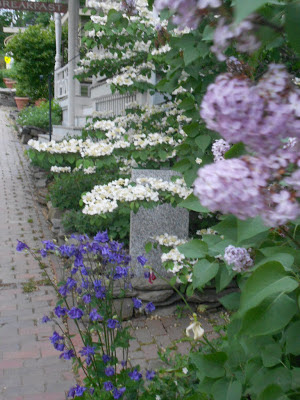 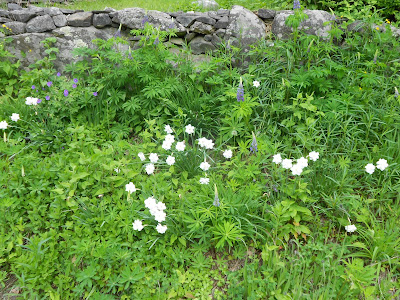 Roadsides and sidewalks that had been covered in gravel and winter debris only weeks before come into bloom. (top to bottom: Castine, Damariscotta Mills, Wiscasset) 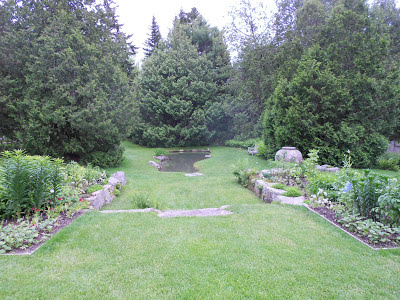 And summer goes on, and suddenly, almost without noticing the change, what looked like this in June 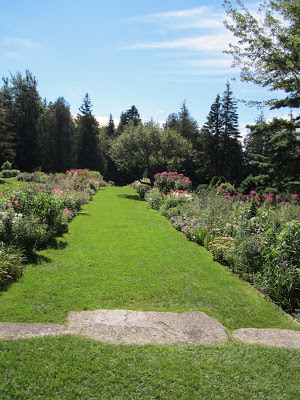 Looks like this by August (Thuya Gardens, Northeast Harbor, two views of central allee toward pool) 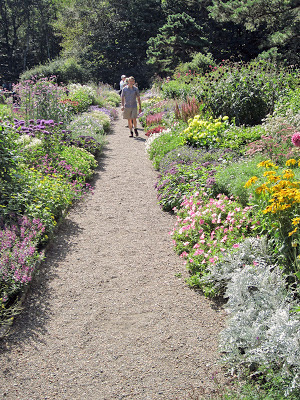 For a few weeks, the Maine climate is as conducive to gardening as any in the world.  Here, a path in the Beatrix Farrand  designed garden on the Rockefeller estate at Seal Harbor.

Posted by The Down East Dilettante at 1:15 PM 7 comments: