The White Pine Bureau,  a joint effort of the Northern Pine Manufacturer's Association of Minnesota, Wisconsin and Michigan and the Associated White Pine Manufacturers Association used to sponosor architectural competitions to promote the use of white pine in building.  The entries for some of these competitions were then published in Architectural Review.    Held in 1917, this particular competition was "Design for a White Pine House to Cost $12,500".   Judging was held at the Greenbrier in its pre-Dorothy Draper days.  Such competitions were a good way for a young architect to get his work before he public---although I seriously doubt that many of the entries could have been built for the money even then.   Adjusting by an inflationary factor of 20, for today's cost it would still be difficult.

Herewith a few of the designs, and some observations about the sources used by the young competitors: 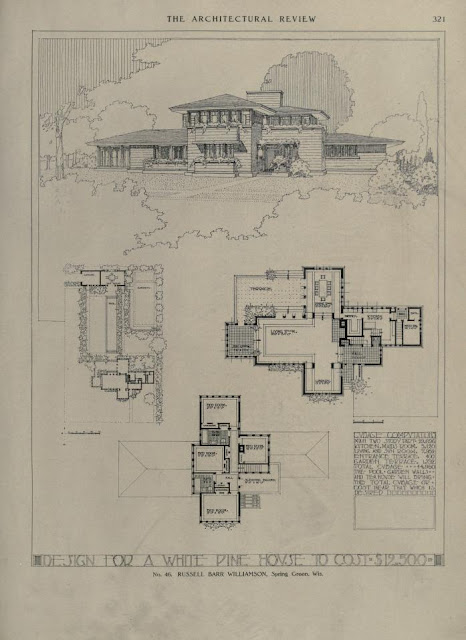 The White Pine Bureau, through their White Pine Series of Architectural Monographs, a promotional series which documented important early American wooden buildings, played a large role in spreading the popularity of traditional American styles in the first half of the 20th century.  Therefore, the Prairie style house above, by Russell Barr Williamson who had spent a few years working in Frank Lloyd Wright's office, is something of an anamoly.  In regards to another Williamson entry in a 1918 White Pine competition, the judges, who included William Adams Delano, had this to say: "This type of house, though somewhat outré to Eastern eyes, has distinct merits, both from the point of view of practicality and picturesqueness." 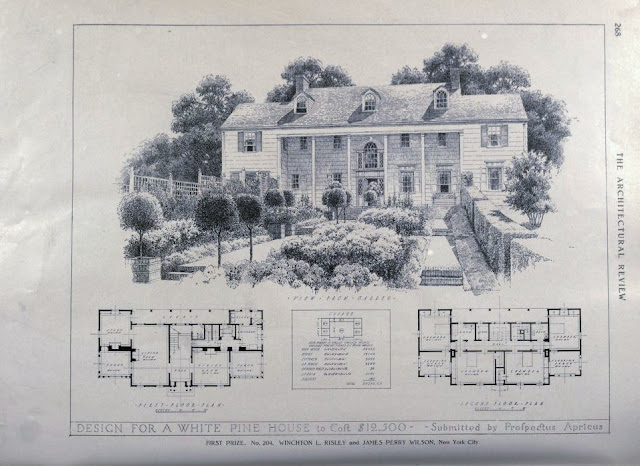 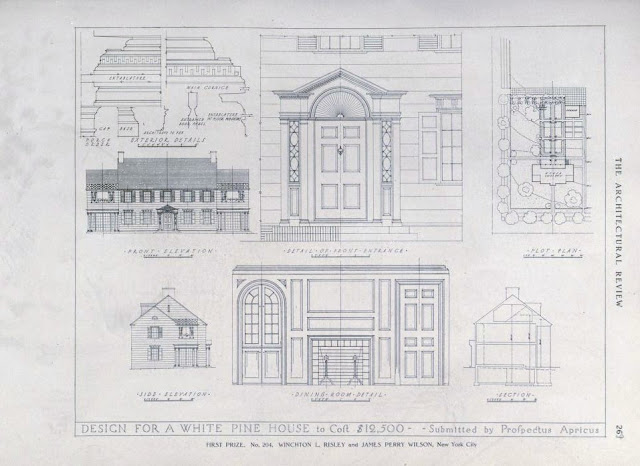 \
$12, 500, Huh?  I don't think so, not even 90 years ago.  That's a lot of expensive millwork indicated for the very conventional house above, which won First Prize in the competition --- the White Pine Bureau clearly had a preference for traditional designs.   But what an improvement over the 'Colonial' builder spec McMansions  that have populated new suburbs in recent years.  The architects, Winston Risley and James Perry Wilson, were Columbia trained The partnership apparently did not continue.  Risley went on to design houses for the Rancho Santa Fe development in New Mexico during the depression, and James Wilson became a painter of note. 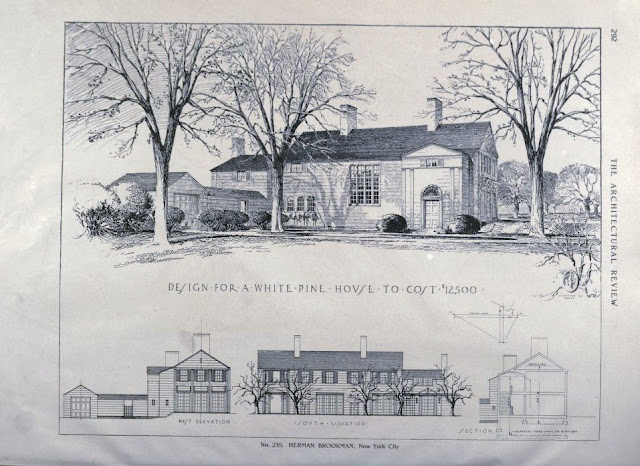 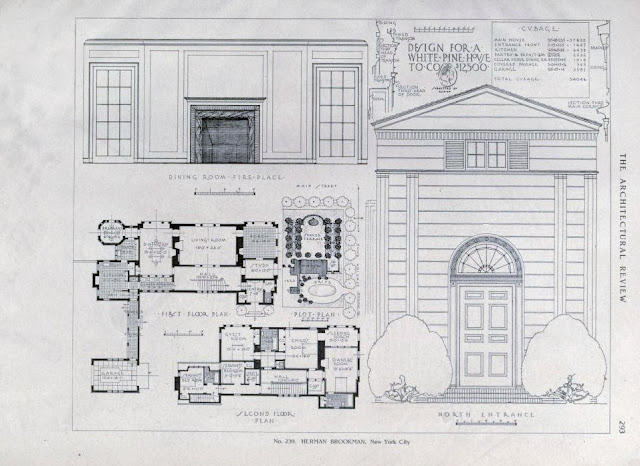 I thought this interesting design was channeling Albro & Lindeberg, and sure enough, the architect, Herman Brookman, had worked in their office before becoming one of the most prominent architects of the Pacific Northwest. (My father used to tell me that someday I'd break my arm patting myself on the back congratulating myself.) 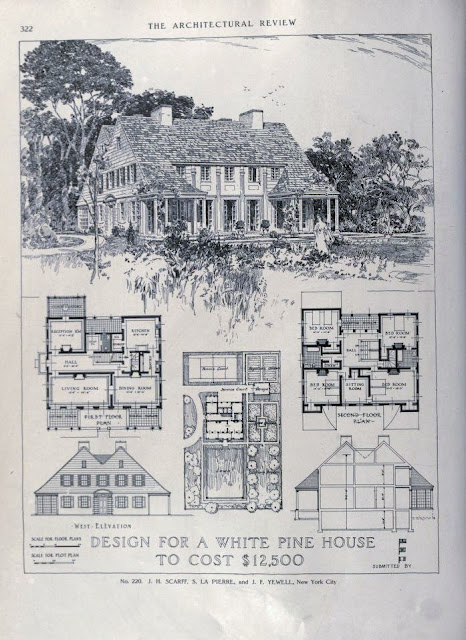 I could find little about Messrs. Scarf & Yewell, but they clearly borrowed from Edwin Lutyens here, and applied his famous facades to a more conventional floor plan. (Help, my Lutyens books are not at hand, and I forgot the name of the house that inspired this design. 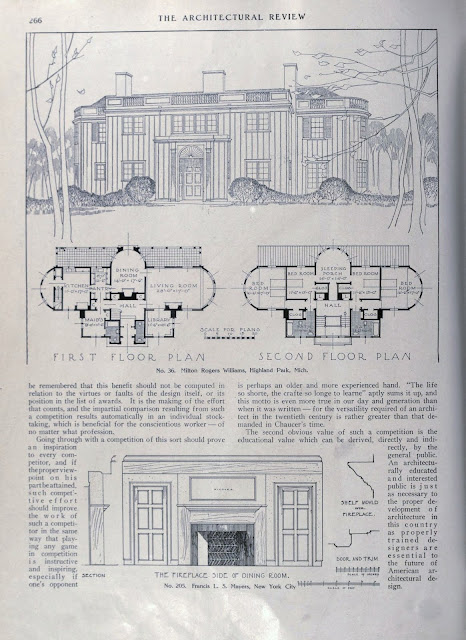 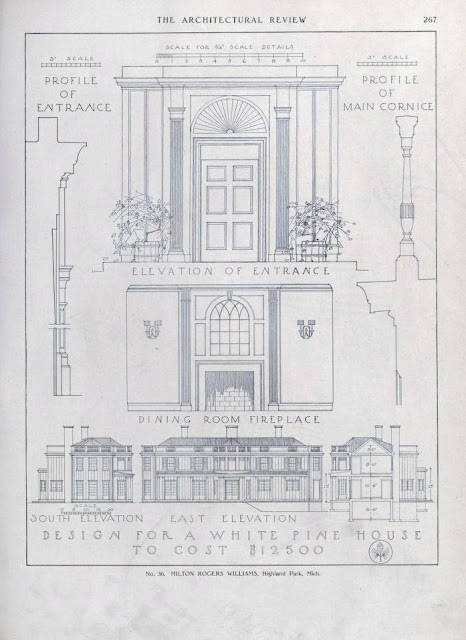 This Hollywood Regency design was submitted by Milton Rogers Williams of Highland Park, Michigan, about whom I could find nothing.   I'm interested to see that he has used Montebello, a famous and now lost Federal era country house near Baltimore as his inspiration, but given the formal design a casual rusticity with his use of batten board siding contrasted with elegant details.  Below, Montebello, the house that inspired the design. 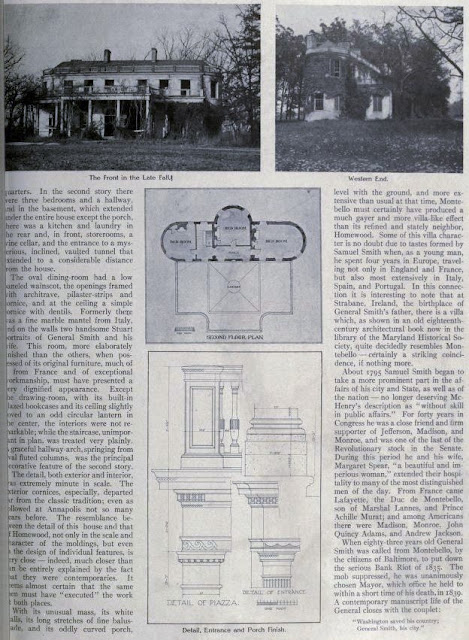 OMG - i want to build both 3 and 4. those huge multi-paned windows are fantastic and that blocky pediment is neat too. and that all those panes are all over the house. on 4, i love the way the wings that stick out are part of the slope of the roof and with those tall narrow windows in between - really striking. my ex hated bungalows so i never told her i'm crazy about them and 4 is a bungalow on a grand scale.
i think you're totally right that all of them push the $$$ limit right off the chart unless their uncle owned a forest, a lumber yard and a contracting company.

who makes these security words up - some of them would make pretty good words eg the one below is "idgest" - that would be the condensed version of your personality.

These are fun. My mother used to say, "Make yourself useful, instead of just beautiful", especially when she wanted me to set the table!

I am just in love with the Herman Brookman house!

Turner and Architect: Well, it's unanimous. The Brookman is my favorite also...neat plan, lots of light, an imaginative elevation.

Dandy--I love your mother's saying. I think sometime I'll do a blog post asking for what parents used to say.

Although the Brookman house is certainly interesting, it is the Scarf & Yewell design that really caught my eye; in addition to being Lutyens-inspired, the garden side also shows a Lindeberg influence. And I am afraid that I will not be able to stop myself from designing my own interpretation of the Milton Rogers Williams 'Hollywood Regency' house.