Eccentric in New England: Mr. Searles and His Many Castles, Part I

I tried, but this one got away from me---it is a story impossible to compress into one post---one man, four castles.  Move over, Alva Vanderbilt.
I have always been fascinated by compulsive builders (Another wing!  Another folly!  A bridge across the lake!  A Tower! ), and by the fantasies they create for themselves.  So taken am I by the creation, that I don't give a rat's bottom about architectural greatness in these cases.  The fantasy is its own end.
Kellogg Terrace approaching completion.  The nave-like wing to the left is the three story music room
Edward Francis Searles was born in Methuen Massachusetts on July 4th,  1841, son of a mill worker and small farmer.   Possessed by beauty at an early age, Searles left Methuen to pursue an artistic career.  By the 1880's the 40-something 'confirmed bachelor' (wink, wink) was working for Herter Brothers, then probably the leading decorating firm in America.  Fortuitously, he was assigned to a job for Mrs. Mark Hopkins, widow of the California railroad tycoon, for her new house on Nob Hill, now the site of the Mark Hopkins hotel.

Mrs. Hopkins was also building a summer house in her home town of Great Barrington, Massachussets, to be called Kellogg Terrace. It rises improbably at the very edge of the Main Street, a fairy tale Loire Valley chateau of blue dolomite transported to the Berkshires.  The architects were McKim, Mead & White, but soon Mrs. Searles's new decorator, with plenty of. ideas of his own, was pushing them aside as he embellished and burnished the new mansion, with a vast domed music room containing one of the largest residential pipe organs in America ( a theme that will keep re-appearing in this series).   Young W.E.B. Dubois, also a Great Barrington native,  had a job as timekeeper on the construction site, and in his autobiography remembered "Searles had the glamor and clothes of an English gentleman, and soon the whole direction and control of the Hopkins fortune passed into his hands." 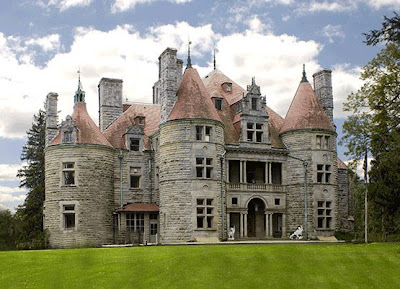 Kellog Terrace, Entrance front, showing juxtaposition of Loire Valley inspired towers, Serlio arch, and native stone.
Soon the bachelor and the widow, who was 22 years his senior, married.  Plans for the castle got ever more elaborate----a lover of music, Searles created a baroque music room with one of the largest  residential pipe organs in the country.  Searles was also an inveterate wall builder.  Kellogg Terrace, facing open countryside on the south, and backing up to the town of Great Barrington on the north, was soon surrounded by a castellated and fortified wall, presaging the many more miles of such walls, ever grander, that lay  in Searles's future.. 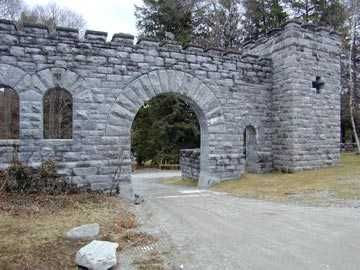 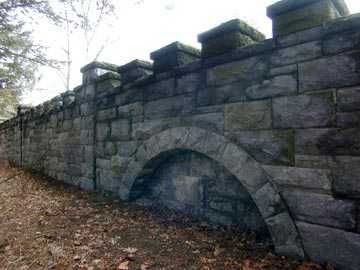 The crenelated stone walls of Kellogg Terrace were but a simple harbinger of the miles, ever grander, of such walls Searles would cause to be built during his 30 year building spree. 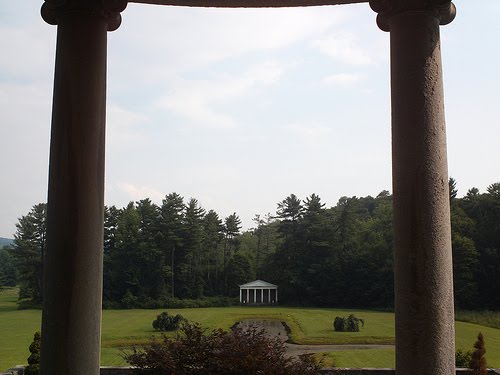 A view of the park from the terrace. (photo courtesy of brushbin via Flickr) 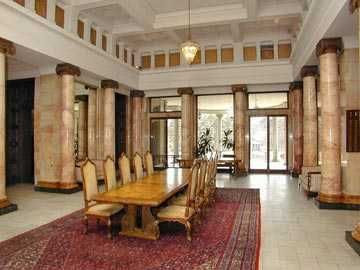 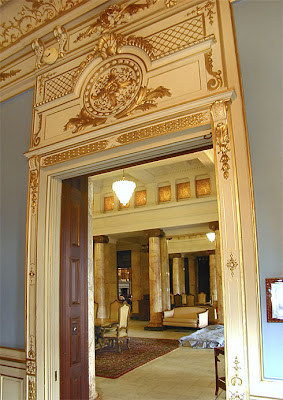 Vista from Drawing Room to Dining Room (above).  The level of finish at Kellogg Terrace is of the high quality of the era, if a bit overwrought.  (below), detail of drawing room ceiling 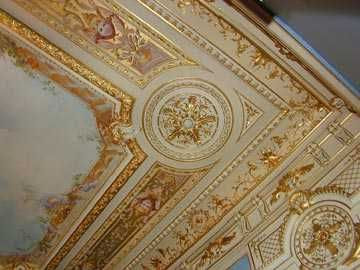 Library
For summers, there was White Hall on Block Island, a double house with separate matching wings for Mr. & Mrs. Searles.  Back home in Methuen, Searles took over his mother's modest Federal style house on East Street, at what was the edge of town, and began turning it into a mansion, which he called  Pine Lodge. Here the middle aged decorator brought his bride, and together they enlarged and embellished the estate, and donated money to myriad local causes. 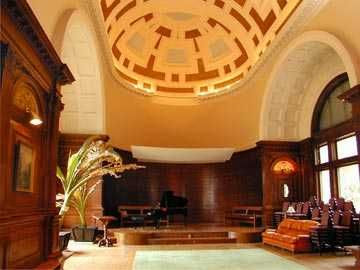 The Music Room, minus the organ and marble columns later removed to Pine Lodge.  The sofa at right gives an idea of scale
Then, in 1891, tragedy struck.  Mrs. Searles became ill and died.  There ensued the usual tabloid accusations of foul play, and will challenges by disgruntled relatives.  After a suitable mourning period, the widower picked himself up, and took his $21,000,000 dollar inheritance (around a billion in today's money, for those not impressed by such a small sum), and selling Kellogg Terrace, went home to Methuen, and started on what was to become an almost endless round of remodeling and enlarging Pine Lodge. 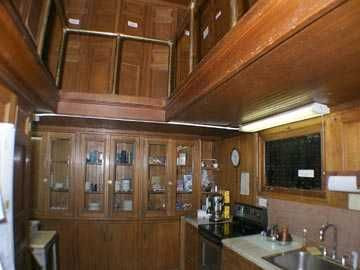 Two story butler's pantry.
Since the 1880's, Searles' partner in building had been English born gothicist Henry Vaughan, who was achieving note as one of the prime ecclesiastical architects in the country.  Now, with any financial constraints lifted, the two literally went to town.  Tomorrow, we will explore the marvelous story of how the two men remade Pine Lodge, and the town around it to Mr. Searle's generous and fantastical vision.  Kellogg Terrace in Great Barrington was mere rehearsal for what was to come next. 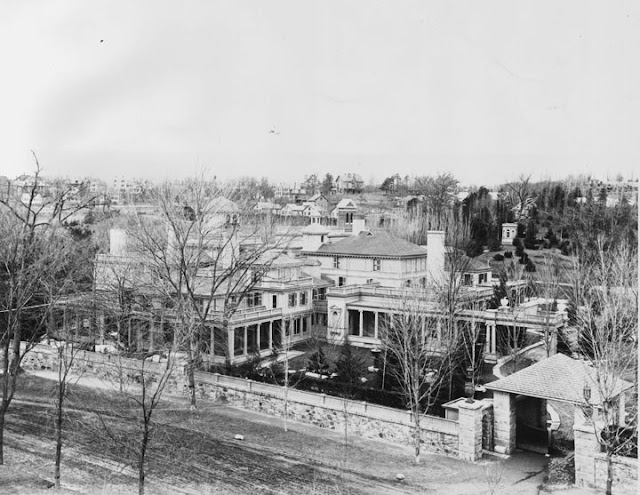 Pine Lodge, the Searles estate in Methuen,Before.  Tune in tomorrow for After
Posted by The Down East Dilettante at 5:20 PM

As I scrolled through this post my mouth was wide open in awe, I
can't imagine living there.
You wouldn't have to have Alzheimers to get lost in there.

I literally can't wait! I wish I had seen this post TOMORROW when the other was up as well LOL. Just amazing.......I did a quick google search and saw that searles castle was for sale in 2007 for $15 mill - if I had the money what a great blogger retreat center it would be! haha
'tragedy struck' - haha...oh i'm sure that old queen never had a happier moment in his life!

you knew i'd say something. this is my favorite style - huge and eccentric. also, i am a member or ATOS (american theater organ societry) so am doubly interested. sunday, i am going to hear a restored theater organ installed in a surburban house in freeport.
now this is architecture. none of that dreary puritan right angle stuff. guys like searles, mizner, etal knew how to build. (and build and build). its like potato chips - you can't eat just one.
waiting with bated breath for more.

Resilience, helpful with a billion. The bounce back was inevitable- His castles are something, but nothing to rival Biltmore-the other Vanderbilt's summer retreat here in NC (of course I would have to add this) It is fairly amazing and still own and managed by the family. Come for a visit. http://www.biltmore.com/

The Searles "castle" is now a school for troubled children, and a building I drive by regularly. I have been curious to know more about it; thank you for teaching me its history!

The Searles castle in Great Barrington, MA ("John Dewey Acadamy") has been on the market for quite some time - initially at $15M - and with no takers. It is now down to $12.5M which would still make it the most expensive in Berkshire Co if the sale transpired but is very unlikely to occur any time soon.

one of the finest blog ever and thanks for sharing such a useful information.
- great barrington ma hotels

I live half my life in the Town of Methuen Ma
I know about some Searles Estate
But this is more than I remember
It is quite the story
I would like to know more about it.
Pastor Jim Bauchman