For almost every decade of the last century, one of the standard arguments in design has been new vs. old.  On one hand,  modernists insist that new is the only true religion, and that copying is bad.  On the other, traditionalists will put a gable roof on anything from cabin to shopping mall, and be satisfied that their God is being served.  Both sides have their points of course, but in the end, to my own eye, only one question matters---modern or traditional, is it good?  And in the last twenty years, as big traditional houses have come back in fashion, that question is more pertinent than ever as huge palaces of vinyl and sheetrock  have risen across the country, blighting the landscape wherever they land, often replacing older and better houses. 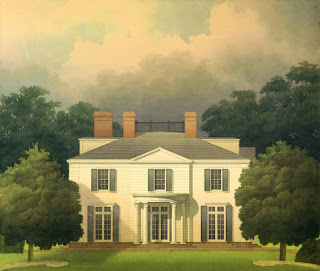 Rendering of a house in Massachusetts, from Peter Pennoyer, Architects.  Described as 'Federal' in the book, it more fairly reminds this writer of the smaller houses of Philip Schutze. 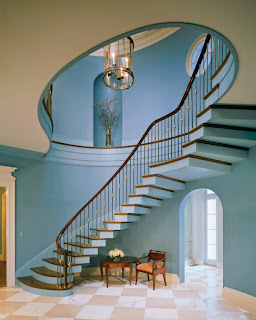 Stair hall in the Massachusetts house.  Graceful in design & execution (I especially like the boxed treads and landing above the arch), its location in the center of the house recalls Ogden Codman's Berkely Villa at Newport


The reason I mention this is that I recently received a review copy of Vendome Press's new monograph, Peter Pennoyer, Architects, by Anne Walker, Pennoyer's collaborator on previous monographs about Delano and Aldrich, Grosvenor Atterbury, and Warren & Wetmore, and as I turn its lush pages, the question of tradition vs. modernism is foremost in my mind. 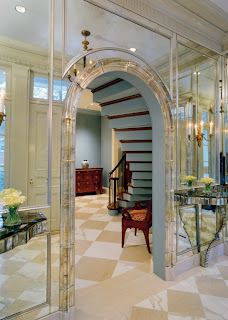 Mirrored Entrance Hall leads to central stair hall
Mr. Pennoyer first entered my consciousness years ago, when his country house for Louis Auchincloss was published.  It was an interesting house, designed for a book lover, traditional, based on Swedish precedent, and with more than a nod to post-modernism in its interiors.  Since then Pennoyer's houses have grown increasingly pure in their traditionalism, and exponentially larger and more expensively detailed, following exactly the pattern of wealth redistribution that has overtaken the country.  When looking at one of Pennoyer's designs, one is transported back to those halcyon years before the great depression, when understated but lush country houses were being built on Long Island, and quiet, elegant townhouses rose on the upper East side.  Mr. Pennoyer's architectural world recalls sleek limousines (not limos), silver cocktail shakers and Lanvin gowns, and nobody practicing today does it better. 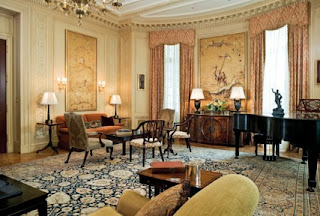 Drawing Room in an upper East Side town house betrays no sign that it was not built and decorated in the 1920's
And herein, as I carefully examined each house pictured, trying to keep thoughts of revolution, or at least tax reform, from clouding my critical judgement, I had what was for me an interesting revelation.  And that is, that the houses that Mr. Pennoyer and his peers are creating for the latest generation of plutocrats, impeccably detailed, beautifully crafted, are interesting, not just for themselves, but because they are a new generation of the type---based not on early precedent, but rather on the latter work.  Thus, if a 1920's Long Island country house of classical Georgian design draws its inspiration from 18th century English precedent (or 17th century  England or Italy, or 18th century France, pick a style)---Jane Austen meets the jazz age, if you will---and the 18th century house in turn evoked ancient Rome, Pennoyer's houses go back to the latest model, and give a new, respectful version for the 21st century of the sophisticated, tasteful, architecture of ninety years ago.  In short, think if Ogden Codman channeled Blondel, Pennoyer is channeling Codman channeling Blondel.  This was brought home to me by a photograph caption, which gave inspiration for a beautifully carved Corinthian capital to Clarence Hanson, the carver who did much of Philip Schutze's millwork, rather than to the 18th century carvers who in turn inspired Hanson. 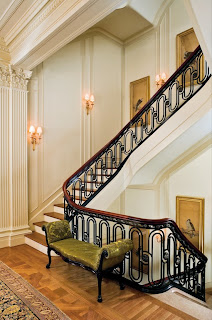 Stair hall in upper East Side Town house, again, purely evoking the pre-depression past
The best of these houses are beautiful indeed, with a level of correctness in design (no shortcuts taken here, moldings are full and complete, curving staircases sweep beautifully skyward), and a sure sense of proportion that is rarely seen in traditional architecture today.  These are buildings meant to convey a message of taste and luxury, of money that is correctly spent, and that rebuke the sprayon stucco chateaux and palazzi that have appeared across the country, in this latest gilded age, filled with Real Housewives waiting for their closeups. 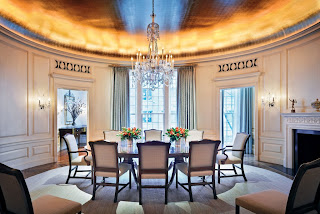 Channeling Delano & Aldrich--a Georgian paneled drawing room mixes with neoclassical in its oval shape, and acanthus grilles above the windows
If I have a quibble with the Pennoyer firm, it is that they are almost too respectful in their homage, and missing is the light anarchy of some of his heroes---the sublimely elegant reductionist designs of Delano and Aldrich, who made traditional so modern, or the picturesque and materials-oriented Atterbury, or the over the top, rule-breaking Warren & Wetmore. 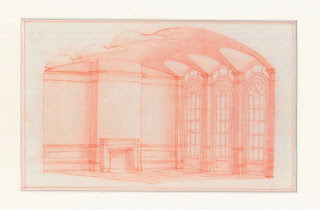 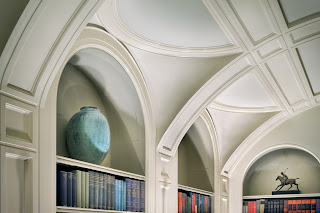 But these are small quibbles indeed, and for this Down East Maine boy, the issue was brought home by a very large shingled summer house that Pennoyer designed on an island not far from here.  Variations on the Shingle Style have been the favorite of big new houses up here for the last two decades, and many of them are just bad---overwrought, over detailed, and over constructed.  Too many of these wannabes borrow too much from the famous examples, and are turreted, gabled, Palladian windowed and gambrel roofed within an inch of their over-designed lives.   This house takes it down a couple of notches---paying close attention to the local vernacular---and succeeds admirably, addressing its site and the conditions of the region, with none of the cliches that characterize much modern shingle work 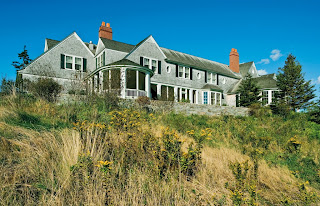 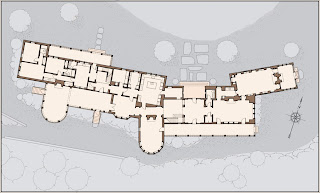 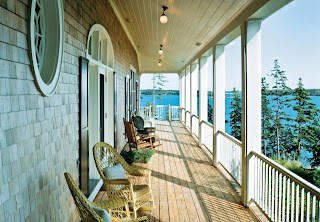 A shingled summer house on an island overlooking Penobscot Bay in Maine pays careful homage to the local vernacular without falling prey to standard cliches
The production values and photography in this book are first rate, as is Anne Walker's text., a welcome contrast to several recent design books.  As one would expect with a monograph of a living architect, critical assessment is beside the point, but the book is beautiful, and thought provoking, nevertheless.  I was especially delighted with the inclusion of several splendid renderings and sketches illustrating the Pennoyer firm's couture approach to design. 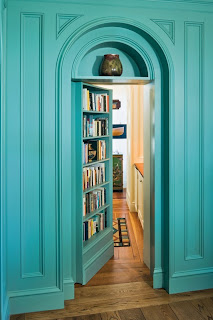 What could be more perfect than a library with a secret door?
Posted by The Down East Dilettante at 10:44 AM

This is the best review of this book yet! Thank you for such wonderful insight.

Just wonderful - you give us something to think about. I really loved the book and think you hit every point spot on!

Wonderful review of Peter Pennoyer's work, Dilettante~
staggering in it's breadth/range/scope and the depth of its perspective. As you can see, I'm running out of
superlatives....still dazed by it all.

I really like your blog. And I love all the great photos of the different architecture. -BC

Down East -
Your ruminations are distilled into a thoughtful and interesting essay here - thanks!

Fabulous post! Just found your blog and am very impressed with your eye and your style of writing! Thank you for such a comprehensive narrative on Pennoyer's book.
Kindly,
Jamie Herzlinger

a wonderful post, and book. I prefer this pure approach too-with all the horrors out there now- this all seems radical. I couldn't live in a house that didn't look old, and much prefer the real thing. I must get the book .

Dilettante, a wonderful review on Pennoyer's book. I am very impressed by your insight.

When we were young we sometimes wished we could have back some tiny fraction of the consumption our grandparents and great-grandparents enjoyed thinking they were building for the ages; now that we're old, I see we're no wiser than they were.

So when I see a house like this, which is exceedingly fine, I think it's great that there are still people who will spend millions on good architecture knowing full well that it will never be recouped when sold. But I also know that the difference between "patron of the arts" and "patsy" can be vanishingly small, particularly with regard to "name architects."

(That said, I can think of only a half dozen contemporary architects I admire as much as Pennoyer.)