The Pratt Who Got Away

Standard Oil tycoon Charles Pratt had eight children and a strong dynastic streak.  He famously bought 1100 acres of land in Glen Cove, New York to create a compound for his family, giving each child a share of the property.  Ever the efficient businessman, he consolidated estate operations for the various family houses into one compound, called the Pratt Oval, with a central administration building and stable and service facilities for each property. 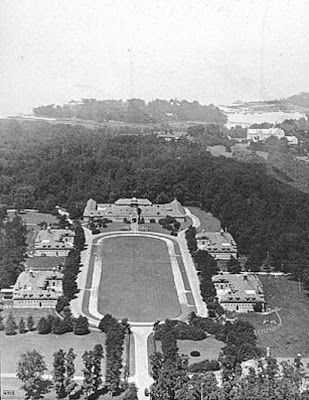 The Pratt Oval, the administrative and service buildings for the Pratt family compound at Glen Cove
Although Pratt died soon after creating the estate, his children embarked on major building sprees, building five famous mansions at Glen Cove, among the most admired houses of their time, using architectural firms such as James Brite, Delano and Aldrich, Walker & Gillette, and Charles Adams Platt.  In turn their children built more houses on the family property, until Depression and World War II took their tolls.  Most of the Pratt houses are today public or semi-public facilities, and the Pratt Oval is just a memory.
But wait---that accounts for the six Pratt sons and one sister, but there was a sixth Pratt child unaccounted for in Glen Cove.  What happened to her?  Where did she live?
In New England of course, almost in the Dilettante's back yard.   Helen Pratt married Ernest Blaney Dane, a wealthy investor and president of the Brookline Savings & Trust Company, and unlike her siblings who had their beachheads on Long Island and Park Avenue, she lived in Brookline, with a summer home in Seal Harbor, Maine, where also lived the son of her father's old business partner, John D. Rockefeller.  The E.B. Danes houses were perhaps not as architecturally distinguished as those of her brothers, but they were, nevertheless, impressive by most standards. 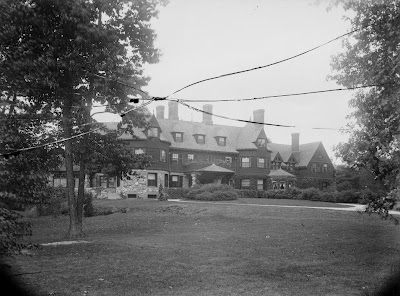 'Roughwood', as originally built 1889-91 for William Cox
Soon after their marriage, the Danes bought the Cox estate, Roughwood, on Heath St. in Brookline.  It was a very large chateauesque shingle and stone house designed a few years earlier by Andrews, Jacques, & Rantoul.  One of the assistants on the project was a young MIT graduate named Charles Sumner Greene, who would soon move to California with his brother, where they became famous as the firm of Green & Greene. 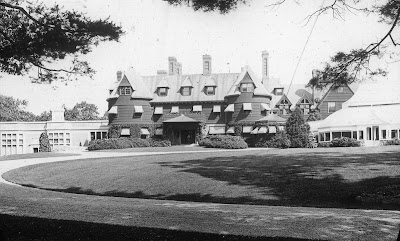 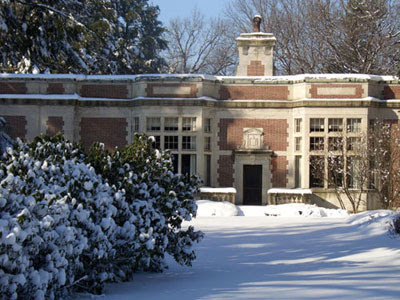 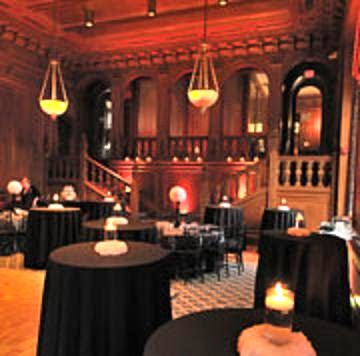 The music room wing added by the Danes
After purchasing the estate, the Danes made many improvements, adding an Elizabethan Music Room wing, and an enormous crystal palace style palm house at the other end of the mansion. 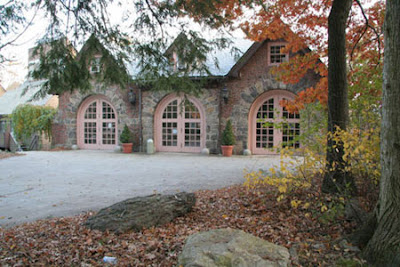 The garage at 'Roughwood'.  The true scale of the building is not apparent in this photo.
Early devotees of motoring, they built a large garage, capable of holding nine cars, with a lower level carwash and machine shop, and chauffeurs quarters above.  This garage was published often in its day as a model of modern efficiency. 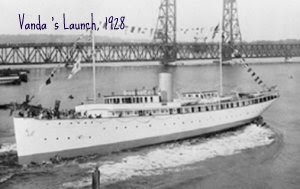 The Dane yacht 'Vanda' at its launch at Bath Ironworks
E.B. Dane was a devoted yachtsman, and in the summers they went to Seal Harbor on Mt. Desert Island in Maine.  In 1909, they purchased Glengariff on Dodge's point, a roomy shingled cottage designed by Long Island architect Isaac Green only a dozen years earlier, and demolished it. 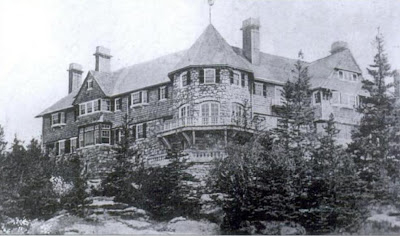 'Glengariff', Ernest and Helen Pratt Dane's summer home at Seal Harbor
In 1911 work was completed on a new and much larger stone and shingled cottage designed by F.L. Whitcomb of Boston, also called Glengariff.  V-shaped, the house dominated the end of the point. The new Glengariff was 40 feet deep and stretched 244 feet from end to end.  Offshore were anchored Mr. Dane's successively larger yachts, culminating in the 240 foot Vanda, commissioned from Bath Iron Works in 1928. 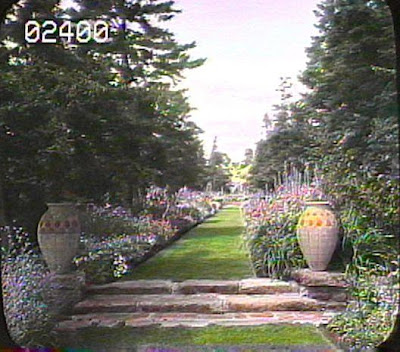 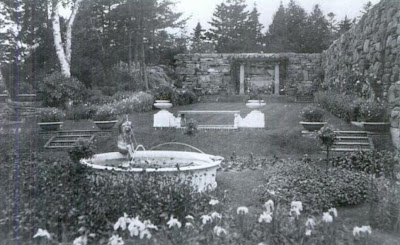 Two vintage views of the gardens at Glengariff
A dedicated plantswoman, Helen Dane first had I. Howland Jones of Andrews Jacques & Rantoul lay out terraced formal and informal gardens among the ledges on the rocky steep property---nature tamed by money.  Later, Beatrix Farrand, who maintained an office on her estate at Bar Harbor, was brought in to make changes and improvements, and by 1933, when the Garden Club of America visited Mt. Desert Island, the Dane garden was one of the highlights of their tour. 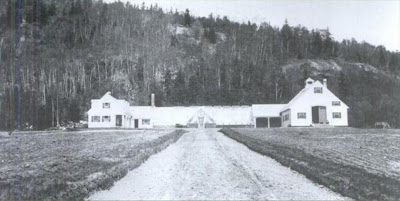 The Dane's home farm at Seal Harbor
Lacking the Pratt Oval, the Danes purchased land half a mile from the main house for a small gentleman's farm whose barns, gardens and greenhouses supplied the estate with food and flowers and necessary services. 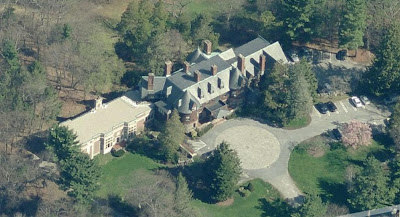 'Roughwood' as it appears today, as the main building of Pine Manor College.  The parking lot to the right is the approximate site of the palm house wing
The Dane estates weathered the great Depression, but by WWII, things were drawing to a close.  The Vanda was requistioned for duty in the war.  The Brookline estate was left in favor of a gentleman's farm in New Hampshire, where Mr. Dane died in 1942.  The Brookline estate became a private school, and later Pine Manor college.  John D. Rockefeller Jr., in whose view shed Glengariff stood, bought the house for a song in 1946 and had it demolished (His son David later built a house on the property).  The Seal Harbor farm was later used as a riding stable connected to Acadia National Park.
The Pratt estates on Long Island are extensively documented on the blog 'Old Long Island', and those posts can be accessed by clicking HERE.
For a fascinating 1919 Country Life article about the Pratt estates at Glen Cove, click HERE
For a New York Times 'Streetscapes' article about the Pratt town houses, click HERE
And as always, click on any picture in this blog to enlarge for more detail.
Posted by The Down East Dilettante at 7:53 PM

That some of these incredible buildings are conceived, built, and then disappear forever in a matter of decades boggles my mind.

Wow beautiful place, and the garden is so big. You can plant more lovely flower here.

"You will never be happy if you continue to search for what happiness consists of. You will never live if you are looking for the meaning of life" - Albert Camus

You can get more happiness quotes at http://www.quotelandia.com/category/Happiness

I often find the outbuildings as interesting as the main house.

Down East -
What an interesting post. You constantly surprise (in the nicest way)!

for my part, the pratt oval is the embodiment of the long island lifestyle. it is purpose driven but put together in such a beautiful style and they spent so much money on it. its a synergyistic masterpiece. altho they're just service buildings, they all hang together and are landscaped. it's perfect. one poor little piece still exists but i almost wish it didn't.

the rest of the post shows how different the rich are. they blow in and tear down a house 10 years old and build an absolutely exquisite mansion which another too rich guy tears down 30 years later. except for sucking down some of that wealth, the locals must have laughed themselves into a conniption (sp?) fit. too bad, too, as i totally love that Glengariff house. too bad they couldn't just donate those houses to those who would appreciate them (you or me) with the taxes paid for life of course.

security word def - "fulsptok" - Very rich Lithuanian Christmas dessert. the name derives from the untoward noises made when you eat too much of it.

PS - whatever happened to all those multi hundred foot yachts. every time i hear one mentioned, they were all requisitioned by the government for use in WWII. did U boats sink them all or what? you'd think serving on them would be a real treat but probably the navy painted all their hand carved panelling olive drab as the military seems to be threatened by the beauty in all these rich houses and boats they commandeer.

security word def - "stero" - my audio system with only one speaker

Down East -
2nd comment - I feel better now that all the Pratts are accounted for (in that generation anyway)!

Merry Christmas Down East Dilettante, all my best to you and yours.

I grew up living on the Roughwood Estate as my dad was the poultryman on the farm. The photo of the main house from 1900 showing a white building addition on the right must be a architect's rendering as there was never an addition like that. The buildings were all magnificent including he barn which still stands with weathervane intact. We spent many summers riding the cows in for milking. I have a picture of the "cottages" which housed four families who worked on the farm if you are interested.
Peggy

Dear Peggy, my name is Nathaniel Dane and E.B. Dane Jr. was my grandfather. I loved hearing your personal memories of that time. My dad and uncle's have both told me stories of messing around at Roughwood as children. I wonder if you knew them or played with them? Thank you!

I dont remember any of the Danes playing with us on the farm. I went to hear Bert Dane talk last Nov at the house. His recollections were fun. But not the same as mine. We were Tom boys, always in trouble, chased off the farm by the super all the time. I remember hiding in the hayloft above cow barn and he was poking a pitchfork into the hay trying to find us. Bert saying he played in the hayes Bales, but we never had a Baker. Sneaking into the bulls yard was always fun. We were skinny enough to fit thru the iron bars, irritate the big bull and slip out. I remember my Dad had to go get the huge 300 lb pig, Lucy on Hammond Street as the police were going to shoot her. He took a bucket of grain and she followed him home. So many fun memories......