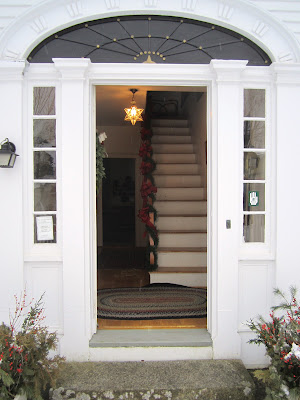 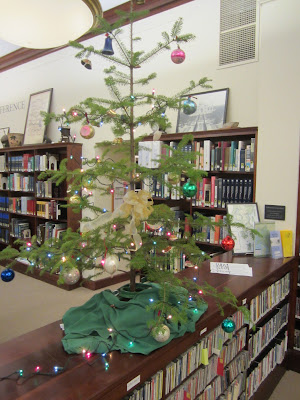 Posted by The Down East Dilettante at 11:53 AM

Love that Adelphi paper. Thanks for sharing.

Lovely. Merry Christmas way up there!

I love the wallpaper! It reminds me of an Albert Hadley designed intricate crackled stripe paper. While one may not appreciate a sample of either, the effect in a room is very successful for certain decorative schemes.

A Christmas tree in a public library! Anemic or not, what a sight to behold; that must be a rarity.

And I was inspired by the improvised fanlight in the house museum in the link!

Best wishes for the new year!

Thanks for reminding me how fortunate we are to have Stephen and Tabitha King in our state.

I always love seeing our town through your eyes. I agree, the decorations were very restrained this year and I especially missed the greenery on the bridge. The soft snow all day on Christmas made up for all of it! Happy Boxing Day DED!

Interesting that you should write that Christmas decorations were subdued in your town this year. We did not put up any lights outside at Darlington this year--the first in many we didn't. We also only put up one small wreath, homemade, instead of half a dozen or so. I confess that we just didn't have all that much of the Christmas spirit this year. Overly busy at work up until the last minute, and exhausted by it. And we are not alone, I find, from discussing this with friends and colleagues. I'm not aware of any of our friends throwing a party this year of any scale, including us. We have much to be grateful for, certainly, but what we are celebrating is more subdued, and focused on our immediate family, and not as expansive as in years past. We also made a conscious choice to not spend indiscriminately, and our gifts to each other were small, tokens, really. Merry Christmas to you and yours, DED.

We've given up the traditional Christmas thing. It just got too big and too meaningless. We put out topiaries with lights by our front door on the night of the winter solstice and turn them on each night until the first day of spring. Inside we cook wonderful food, drink new wines and give each other the gift of meaningful time shared without stress. My only regret is that we didn't do this much sooner. Happy holidays without the holidaze.

Happy after-Christmas and New Year to you and all your readers. I agree with you on all your post points and am extremely tired of eating (and even drinking, which really alarms me!) I think the waspy restraint at Christmas can sometimes be a bit dull; here on Chestnut Street we are somehow culturally constrained to single white candle lights in our windows while the rest of Salem is much more colorful.

Beautifully described, as usual. How nice that the library (unlike our accidental governor) realizes that those less gloriously endowed in the Pine Tree State need love as well. Just as we must suffer the gov, though, we are fortunate indeed that Stephen King — one of the most generous private citizens in the country — lives in our area.

I wonder if any other writer in the U.S. has contributed as much over time to support his/her home state.

Having just spent my first Christmas away from home, it brings tears to my eyes to see snippets of BH. I'll take whatever I can get. There is nothing like a lone tree of colored lights on a snowy Maine road. Glad to know you properly over indulged. Merry Christmas!