I'm a sucker for 'then and now' photo essays.  Sadly, the 'now' is rarely as good as 'then'---collectively, we are not making the world a prettier place---but there are exceptions, as you will see in today's post.

Grindstone Neck in Winter Harbor is a small but elegant summer colony on the Down East coast---in fact, the easternmost example of the genre in America.

Grindstone Neck happened almost overnight.  John Godfrey Moore, a native of the nearby village of Steuben,went to the big city, made his fortune in railroads and finance and returned home, buying  Grindstone Neck, as well as the even more spectacular Schoodic Peninsula, now part of Acadia National Park. 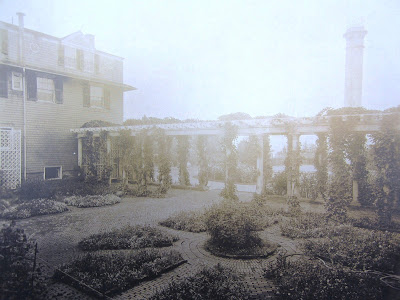 The Gilded Age was coming into its own, and  Bar Harbor, only four miles across Frenchman's Bay, had become known as one of the fashionable stops on the international social tour, Mr. Moore, by now a New Yorker and  group of like-minded investors, all Philadelphians, sought to replicate that success by creating a first class summer resort at Winter Harbor.  To do this, they formed the Landscape architect and engineer Nathan Barrett was engaged to layout the plan of the point, with lots and roads arranged around a central oval.


A water company was formed, plans were made to build a hotel, a yacht club, a swimming club and casino, and a steamer landing, amenities designed to attract potential buyers.  To design these buildings, a young Philadelphia architect, Lindley Johnson, was hired  as company architect, also available to design cottages.   Although he designed other prominent architects also executed commissions, including Wilson Eyre of Philadelphia and W.W. Kent of New York, who designed Godfrey's own cottage. 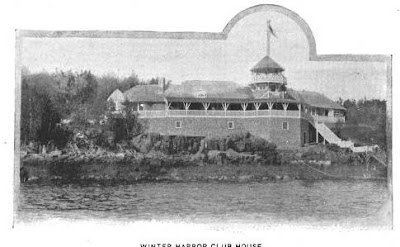 The first lots were put up for sale in 1890, with deed stipulations requiring that cottages be built within a year, and that the minimum cost be $3,000.00.  By 1891, Grindstone Neck, but a gleam in the developer's eyes just two years before, had appeared like magic, and within two more years, the majority of the 40 or so cottages built on the neck over the last hundred years were completed.  Almost all of the cottages were built of natural materials, shingle and stone, nary an Italian villa or Georgian manor in the bunch. Several were clearly influenced by Bruce Price's published work at Tuxedo Park, the ultimate resort development of the era. In a collective master stroke, landscaping was minimal---no more than was need to help the natural landscape of granite, blueberry and spruce achieve full beauty. 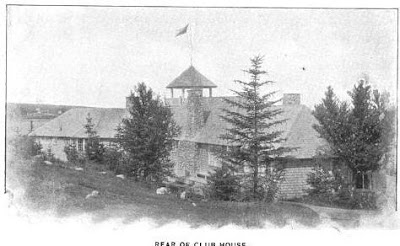 Soon the New York Times had added Grindstone to their weekly accounts of summer social doings on the eastern seaboard.  As with most of the Maine coast, the original colony was heavily Philadelphian (the epicenter, Northeast Harbor, was known as 'Philadelphia on the Rocks'), with many families returning generation after generation. 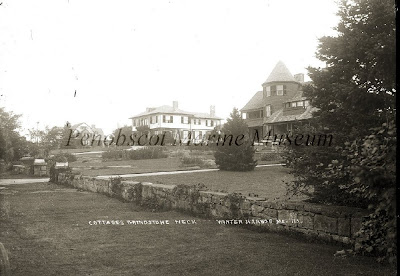 Grindstone did not grow significantly after that first burst of development.  After the Depression and WWII, a few cottages were demolished, and in 1956 the Grindstone Inn burned. Today, trees are taller, roads are paved, but otherwise time stands still in this corner of Down East. 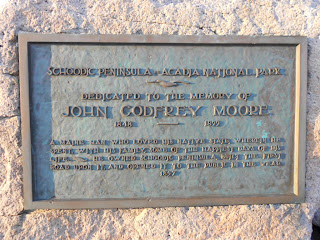 After looking at a copy online of the Gouldsboro Land Improvement Company's 1892 promotional booklet, proudly displaying several of the cottages that had been built in those first two years, I took a late afternoon walk on Grindstone to see how many could still stand, and how they have fared.   Of the 15 cottages pictured in 1892, 13 still stand, some barely altered, some greatly enlarged.  Unless otherwise noted, the cottages are the work of Lindley Johnson. 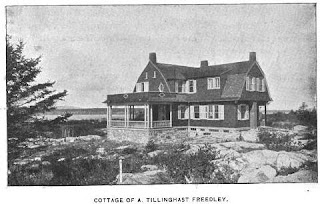 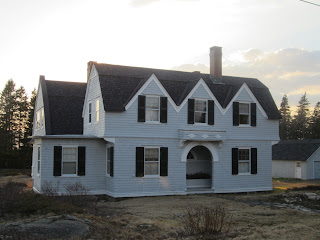 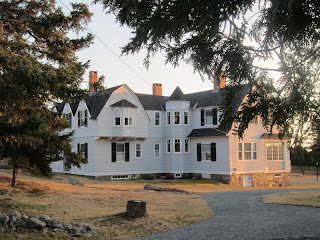 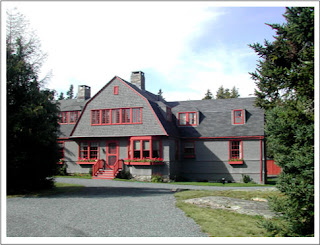 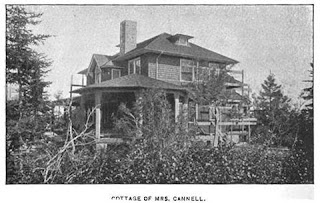 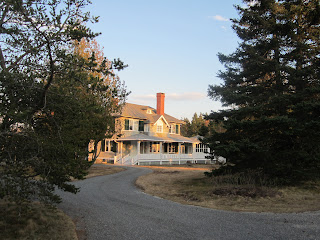 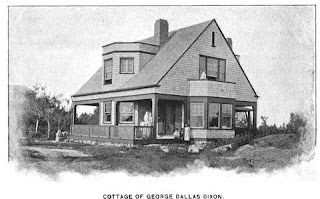 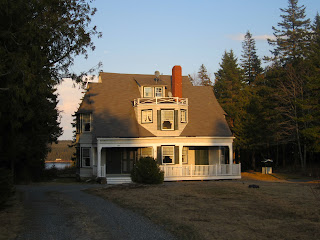 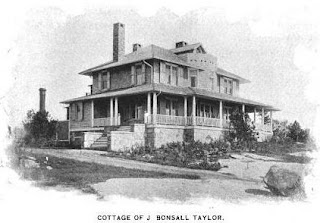 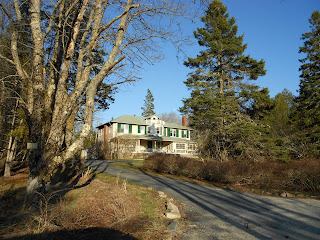 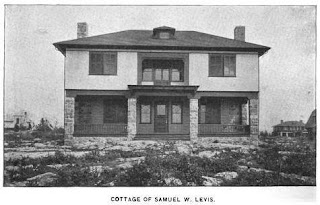 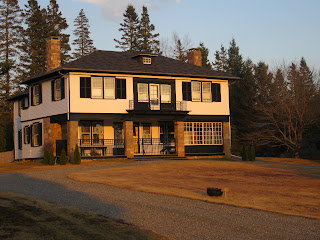 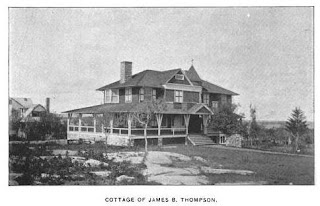 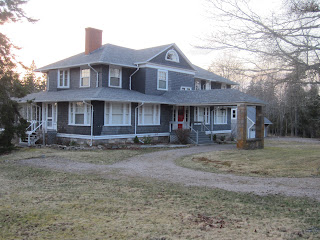 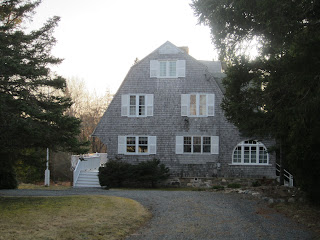 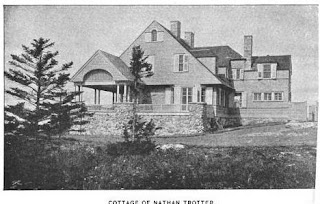 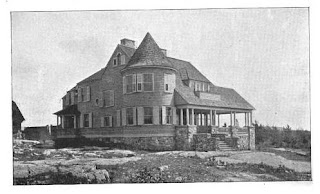 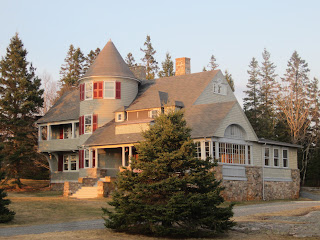 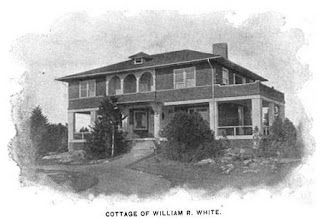 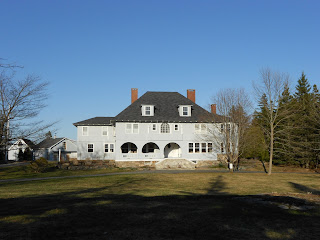 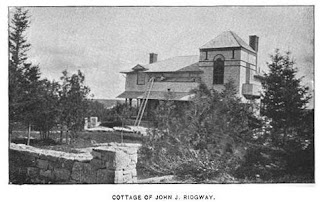 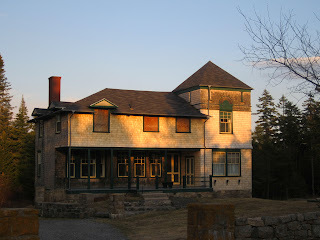 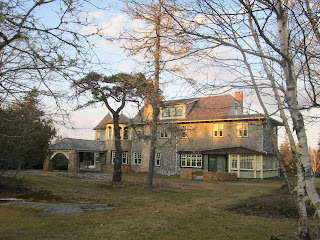 Posted by The Down East Dilettante at 7:36 AM

I share your feelings on Then & Now essays, but glad to see that so many wonderful examples of historic seaside houses have been preserved here.

The forlorn John Ridgway cottage is one of my favorites.

Devoted, these are only the earliest dozen of about 30. Stay tuned for more.

Scott, the Ridgway cottage is my favorite too--a really neat little piece of architecture---and not in the least forlorn--the plywood window covers are just winter boarding.

DED -
This is so heartening to see! It seems like pictures of wonderful old houses are often followed by a note * demolished or * burned. And before and afters usually depict some sort of desecration while these are all mostly intact or even improved!

I am especially impressed by the sensitive expansions of the Berkeley Taylor and Nathan Trotter cottages.

fitz dixon owned the one called "harbor hill" and ran it as an inn for a time. i spent 3 glorious days of my honeymoon there 42 years ago ($43/day double occ. american plan - all meals included) and we returned to celebrate our anniversary for the 12 years the marriage lasted (that's the last one pictured i think). we even got to meet mr dixon one time we were there. we then headed for nova scotia in a brand new VW beetle ($1839) with $143 in our pocket. simpler (and much much cheaper times). gas was 28 cents a gallon.

you didn't mention the fantastic carved granite bench down on the water that you can sit on and stare at mt desert across the bay.

Chip, the renovations on the Berkeley cottage were done in 1934. The Trotter cottage renovations were completed no later than 1915. Be sure to click on the modern view of the Berkeley cottage, another favorite of mine, because the continuous wave pattern of the shingles is really terrific. Grindstone owes its remarkable understated state of preservation to the son, referenced below, of Eleanor Widener, who married the grandson of George Dallas Dixon (cottage also pictured) in a quiet ceremony shortly after her father & brother went down on the Titanic. She preferred rugged Grindstone to the limestone and gilt splendors of her mother's Miramar in Newport.

Charming memories---and they make me nostalgic for my own beetle. Gas had gone up to .27 a gallon when I started driving. I nearly posted a picture of the bench---now I see I should have (its memorial plaque in honor of Samuel Wetherill has long been stolen)

I'm heartened too! Not a bad turn of non-events, except for poor Tillinghast Freedley's cottage. (Love that name; I'm sure he was widely known as Tilly)

HaHa - of course it figures that I would like contemporaneous additions.

So how did Mr. Dixon preserve this colony? He didn't own all the cottages did he? And what about Erdenheim Farms - did he preserve that too?

Donna--the additions to the Freedley cottage are actually charming, and were made only a few years after original construction--making of the original house a dumbell configuration.

Chip, the family purchased most of the shore front lots, thus restricting development and preserving landscape, and yes, he bought and resold many of the cottages over the years. My impression is that he was very devoted to both the larger community where his philanthropy was epic, and to preserving the character of Grindstone.

this is such a nice and useful information for us...i appreciate urs word........Miami Boat rental