Mystery House and a Wonderful Photo 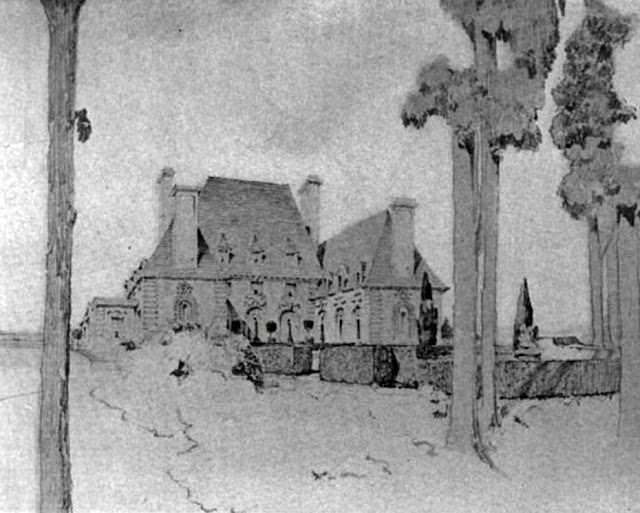 I found these renderings of an elegant French style manoir in a 1911 issue of Architectural Record.  The caption reads 'Cottage at Bar Harbor, John Russell Pope, Architect'. There is no evidence that this house was ever  built, and I'm curious to know more. 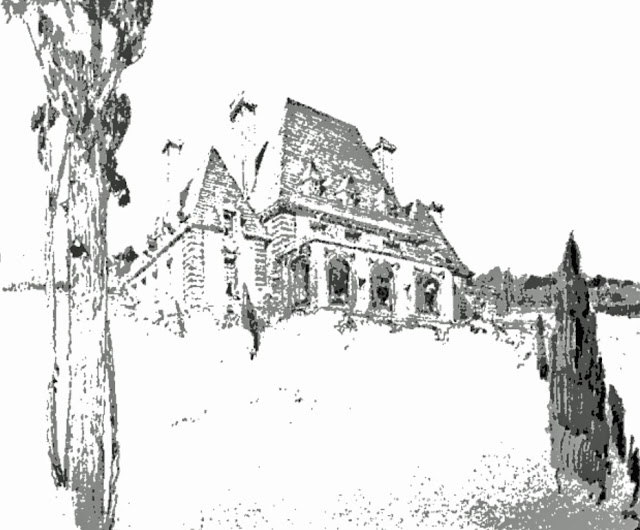 My best guess is that it was designed by Pope for his frequent Washington clients the Edward B. McLeans, she the Hope Diamond wearing mining heiress Evalyn Walsh.  They had bought Briarcliffe, a large old fashioned shingle style cottage at Bar Harbor in 1910, and the following year, the New York Times reported that they were remodeling.  Perhaps they had first contemplated tearing down Briarcliffe and changed their minds?
In the end, they instead added to the old Briarcliffe, including a bowling alley wing, a ballroom with murals of the Bay of Naples, a third floor nursery suite above, and a wing for Mrs. McLean's mother, Mrs. Thomas Walsh.  The resulting hodgepodge of turreted and shingled wings was held together by a new classical courtyard. 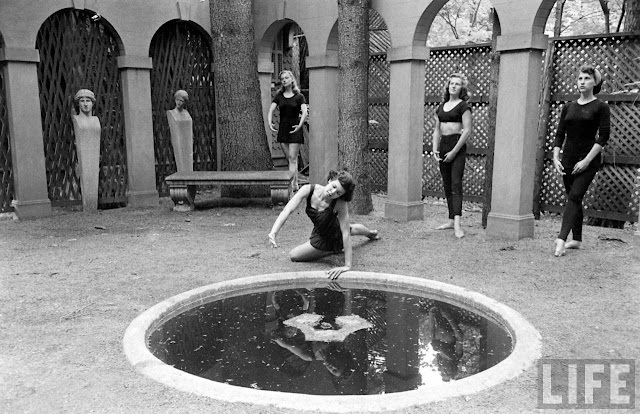 As an aside, Briarcliffe was originally designed by William Ralph Emerson for J. Montgomery Sears, owner of America's Cup challenger Puritan. Between the Sears occupancy and the McLean purchase, the cottage was leased by the John D. Rockefellers, Jr., and was the birthplace of their son Nelson.  And with that, I've wandered far from the original question of the identity of the mystery house.

(Please note the poor quality of the second scan from Architectural Record via Google Books.  This poor quality is something we can expect more of as libraries continue to purge books, and the people who scan can't even be bothered to de-screen when they scan halftones.  Are you with me, Blue?  I think that a lot of important visual information will be lost.  We are soooo screwed.)
Posted by The Down East Dilettante at 7:03 PM

I'm with you, all the way, Dilettante. Today in the university library that they are going to digitize old microfiche keeping only the text - the images are not considered of importance. As you say, we are totally ph - kt. Hyphen for decency's sake. Just got home and read your post.

looks french from the front and egyptian from the back but thats the beauty of these fairytale castles in BH and long island, et al. did briarcliffe go in the fire or does abandon mean they just left it to decay and where was it in BH. i'm a big fan of BH mansions and spent many hours tromping through the woods picking up bits and pieces of post fire relics.
PACK RATS - TURNER, MAINE

Blue: I think we should get all the interested bloggers together and do a library digitization awareness day.
My problem is less with digitization than with the baby going out with the bathwater in the rush to drain the library tub. Personally, it matters way more in the world than what one's cleaning woman wears....

Anonymous. Agreed about the Gould House. They do indeed resemble each other, though the Bar Harbor one is more academically correct. Chateauiver had The oddest roof ever.

Briarcliffe was on the Shore Path beyond the big English Tudor place, Breakwater. The bowling alley wing, with huge arched windows, survives, as does a little portion of the servant's wing as a separate building.

I used to be absolutely fascinated with exploring the ruins also. They're mostly all gone, grown over, or built over now.

What a great post! What is even more interesting than the history that you've shared is your note at the end of the post, and the comments that followed. I agree with you completely. ..I'm still reeling from the topic of what constitutes as proper attire for a cleaning woman...

There's a good book: Architecture of John Russell Pope, with introductory text by Royal Cortissoz (c.1924-1930)...I'll see if I can get my hands on a copy.

Dilettante - I have no problem with digitization but with doing it incompletely. To be selective is to censor and denies another generation what it could need. That the material that has been digitized should be kept seems to me to be self-evident, but who am I when faced with the arguments of cost-cutting, efficiency and modernization? My real fear is with the attitude that information is perfectly safe when digitized. Could that be hubris? The baby is already gone out with the bath water, culturally speaking, and seemingly few people are noticing.

So who's suggesting that the debate raging amongst my most cherished followers regarding the appropriate attire for one's housekeeper ranks anywhere near such more pressing concerns as the destruction of libraries? Come now, let us have some perspective on these matters, please!

Isnt this house in the Pope book that came out a few years ago? Wasnt it torn down? Or does it just look alot like one of his other houses that was indeed torn down?

I just read about Alex Mc Queen, it is so awful. He was so young and his poor family..Had a lot of talent..

That is my family's property on the Shore Path. I was so surprised to find this blog when I googled John Russell Pope and The Briars. I would love to see the whole article and photos from the 1948 Life magazine. It's amazing to think that the classical style courtyard was once on the property. There is a structure (still standing) called the music house that we believe was designed by Emerson but the portico was added later by Pope.

Anonymous, this comment just caught up with me. I am fascinated to hear that the portico was by Pope, which gives credence to the idea that Pope may have designed the unfinished house for the McLeans. I'm sorry this reply is so late, but if this catches up with you, please email me that we might continue this discussion.

Thanks for adding the new photos. I now can see where the courtyard was- right next to the servants quarters. The fountain is still there in a new garden that we have created.You have posted a picture of the music house. This is the structure that we believe has the Pope portico.