In a small town, life is lived in close-up.  One runs into family, friends, and not so friends alike in the space of a few blocks.  Everyone knows the latest gossip instantly. And in a small town, the populace  celebrate and mourn together. 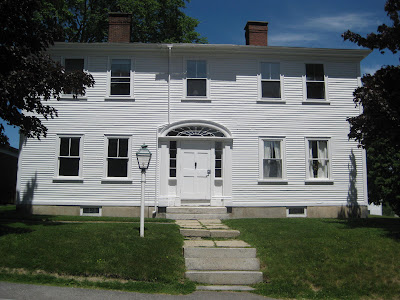 The foundations of this house had just been laid in 1813 when the British invaded our peninsula during the War of 1812, and the house was not finished until after the occupation ended.

A couple of days ago, I happened upon my parents, suddenly in their 80's, suddenly tiny and bent over, leaving for the cemetery to place geraniums at family graves for Memorial Day.  I can remember back fifty years---my great grandparents going to the cemetery on this Spring ritual, then my grandparents, and now  watching my parents walk toward their car with trowels and plants (they cheerfully declined all offers of help), I realized with a start that soon I will be the one taking the geraniums to the cemetery.   Sobered and reflective upon this realization, I walked over to Seaside Cemetery (yes, the dead in our village enjoy ocean frontage), and paid a visit.   Flags were fluttering on the graves of all known soldiers buried there, veterans of all wars since the 1812, when a local militia unsuccessfully defended against British occupation.  The soldiers who served in the Revolution are buried in a yet older cemetery on my street. 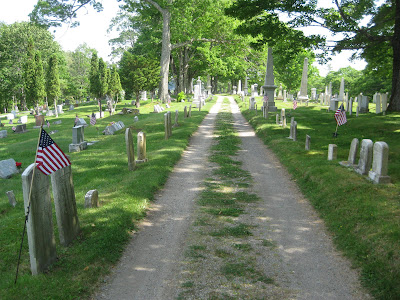 I read that Memorial Day is not celebrated in many places nowadays.  Not true here.  In my lifetime, the veterans of the Spanish American and First World Wars have gone, and now marching in our parade can be seen the veterans of World War II (ever fewer), Korea, Vietnam, Bush War I, Bush War II, and Afghanistan.  Behind the soldiers were cub scouts, and children on tricycles, just excited to be in a parade, not really yet understanding what the day is really about, and sadly,  unless we finally learn from history, all too soon there will be a war for them to remember too.... 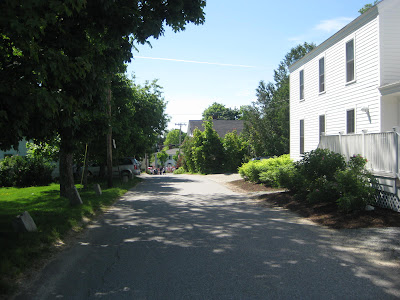 From a quiet side street, a crowd can be seen gathering for the parade on Main St.

It was a breathtaking day---summer came to Maine early and with great sincerity this year--gone the rains that have dominated the last three years.  The lilacs whose fragrance usually perfumes the parade were long past,  the temperature is in the 70's, and the sensation everywhere is of green leaves and brilliant blue sky and sparkling water. The excellent high school band played with verve, the veterans marched proud, the firetrucks gleamed.   And the stupid Dilettante, not paying attention, snapped dozens of pictures, not realizing that he hadn't changed the camera settings from video, resulting in  snapshots that didn't, hence there are no pictures of the color and pageantry here.  Sorry. 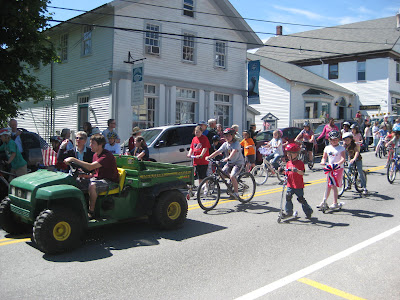 The Dilettante discovered too late that his camera was on video and not taking the snaps thought he was capturing.  This is the tail end of the parade, after the soldiers, the tank, the high school band, the firetrucks and the cub scouts.... 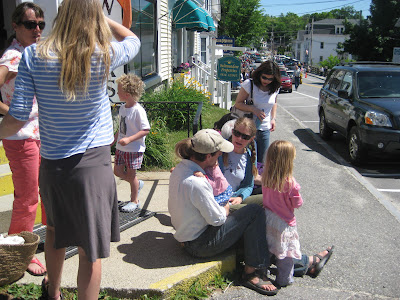 Waiting for the parade to return from the cemetery 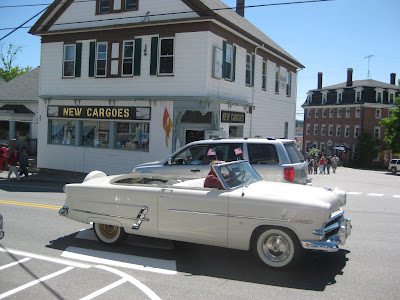 Old cars have been brought out for the summer, here with flags flying in honor of the day

The parade begins at the Legion Hall, in the original village academy building, where a small and dedicated group struggle to keep alive the memories of those who have served.   The cannon on the lawn was fired in salute.  Across the street, in the meadow in front of a village house, there is another memorial, a very evocative one, thousands of tiny white flags remembering the dead, military and civilian, killed in the current Bush War.  Here each Sunday, a peace vigil is held.   Just up the street lived my grandparents, and their neighbors, the Westcotts.  Each family had two sons in World War II, the boys grew up together.   My father and his brother returned safely---cruelly, the Westcott sons did not. 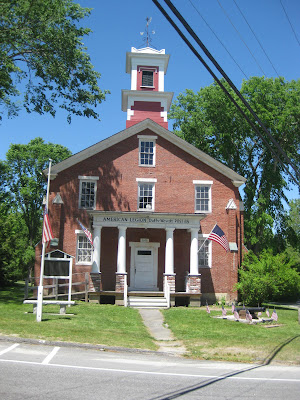 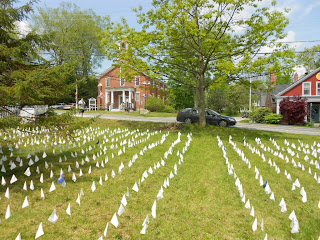 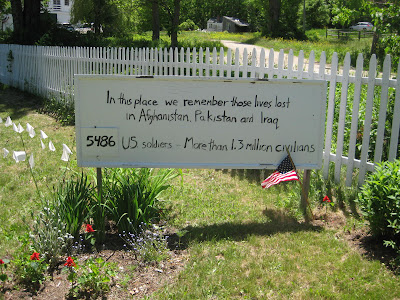 After a stop on the bridge overlooking the harbor, where a 21 gun salute honors the dead of all branches of the armed forces, followed by Taps, the parade moves on to the cemetery, where flags flutter on the graves of Veterans of every war since the Revolution, and a wreath is laid at the Civil War Monument in one corner. 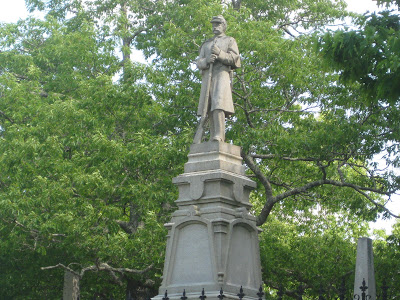 The parade then breaks up, and we all leave for our barbecues. 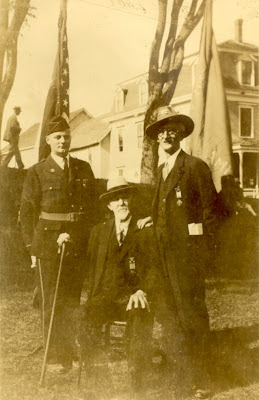 Posted by The Down East Dilettante at 2:28 PM

Dilettante, you've written about our town in a way that is deeply felt, but also with the unique perspective of someone with deep ties. I have noticed that a number of photo blogs and flickr are full of images illustrating respect and reverence, honoring this day. Many people are still appreciative of those who fought and did not come home.

This is quite beautifully put. I relate to the small town and some of the responsibilities that will pass and I never ever dreamed they would- pass to me, as I get older I understand more. Small town south carries much history-some most unpleasant and it still exists, but still there is beauty. One thing that is sure- Next year you can capture images much like you saw today- pgt

I have been reading about 'intangible heritage' recently, meaning the traditions and customs not captured by stone and bronze and canvas but voluntarily enacted by succeeding generations, and this post illustrates that concept really well.

Dear DED-
I found this post particularly moving. I myself have taken on the job of taking my nearly 80 year old mother to the graves of her mother and other relatives. There seem so few who visit and maintain the gravestones now. The memories have faded. I do consider it somehow a singular and soulful task in which young people appear to have no interest. At least in a small town the true meaning of "in memoriam" seems more deeply felt. Thanks again.

This post literally brought tears to my eyes. How sad to have all these wars to remember -- how lovely that we do remember, particularly in this direct and connected way. Every year this is the moment that the point of living in this lovely town touches me the deepest.