So Many Awards, So Little Time, or Once Again I'd Like to Thank All the Little People Watching at Home...

It all started simply enough.

Hibernian Homme, writer of an eclectic, personal, and very entertaining blog, having been nominated for a Beautiful Blogger award, nominated me as one of his seven.  Very kind, very flattering.  I had once before been tagged, and had to perform the required exercise, to tell seven things about myself that my readers might not know (for that list, click here).   Now I had to overcome my natural modesty ( I ask my friends to be quiet here, no chortling) and tell seven more of my most personal secrets.  Okay, needed a couple of days for that.  One does not give up personal details too easily in print. 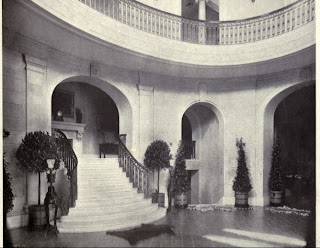 For Hibernian Homme, a stair worthy of Norma Desmond
But then, whilst I'm noodling over this, wonderful Little Augury, who was deservedly awarded by another blogger, tagged me again, and sneaky lady, she did a twofer and nominated me for both Prolific Blogger, and Beautiful Blogger again.  For these, the required exercises were name seven blogs I love, and seven things that readers might not know about me.  Okay, it can take me four weeks to pick a shade of white paint, now I've got to choose seven favorite bloggers from a list of fifteen favorites?  And can I nominate the people who have already nominated me, as they absolutely make the short list?  Plus seven things not well known about myself.  Combined with Hibernian's award, does that mean I have to come up with fourteen?  I'd better go lie down...... 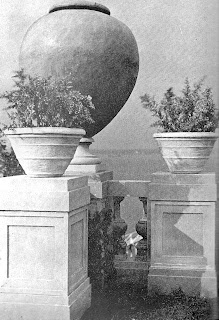 For Little Augury, the urn she so admired, complete with seaside setting
I had little time to ponder this question, for THEN the divine Barbara of It's About Time, and Early American Gardens tagged me, and the essay she wrote for her seven nominations was both so kind and lovely, and her list of what she loves so dazzling, that now the bar had been raised impossibly high. And again the question of math?  Do I do a list for each nomination, or just seven of each for all?  And in nominating Barbara back, do I nominate both blogs or just the blogger?   Hmmmm....... 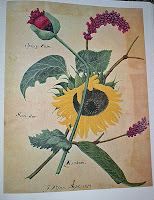 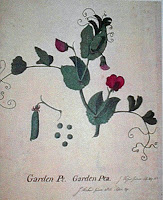 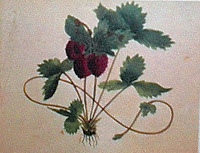 For Barbara, early 19th century watercolors by Jonathan Fisher of plants in his garden
So, just as I'm starting to phrase my thanks, and winnowing down my lists, along comes another nomination, from darling Reggie Darling.  Reggie was another Little Augury double nominee, so now I am again charged with another conundrum.  My  head, swollen to frightening dimensions by all these nominations, is about to explode....All those lists to make!  And which way shall I play it?  If I respond with a separate list for each nomination, no favorite blogger goes unnoticed, BUT, then I have to tell 28 things about myself.  And I, who can barely even make a grocery list (actually I don't make grocery lists, but I'll save that for the seven things not known....) 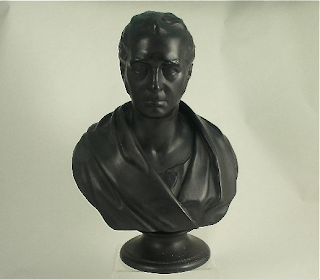 For Reggie, a little something in basic black
So, how do I handle all this acclaim from my fellows, other than with becoming modesty?  Where are my lists?  Tune in tomorrow for the answers.  Right now, I have to go and finish whitewashing a plank ceiling.  Don't ask what shade....
Posted by The Down East Dilettante at 6:48 AM

Brad, I love these watercolors!!! Thank you so much.

We, your faithful readers, are on stand by.

I say, DED, what a clever post, and what a lovely basalt bust. Thank you! I look forward to your follow on post, because I know that it will be (a) well-researched, (b) well-written, (c) include at least several little-known facts, and (d) be amusing -- but then I suppose that describes ALL of your posts, which is why I come back again and again. Reggie

Oh D.E.D.dy these are wonderful! I love the staircase you gave me (it'll be perfect for throwing uncooperative servants down!)