While trawling old architectural magazines in search of Maine material, I came across this delightful little building built in 1922 for the Hincks Brothers Bank in Bridgeport, Connecticut.  I could find  nothing about the building or its current status. 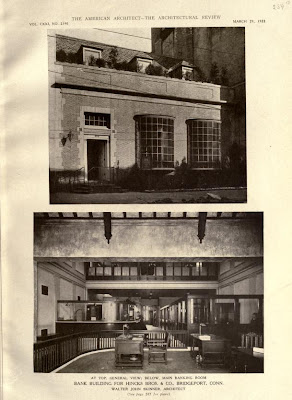 The architect, John Skinner, received his M.Arch from Harvard in 1921, so this must have been one of his first works, and what an impressive debut.  It is clear that he was following what was going on in England with Lutyens, Blomfield, and the rest of the modern revivalists.   I'd move my banking here just for the pleasure of conducting my financial affairs in such stylish surroundings. (This comes at a moment that the Bar Harbor Banking & Trust company is doing a really, really REALLY  badly designed remodel to their branch in our village, so it especially resonates with me this week.). 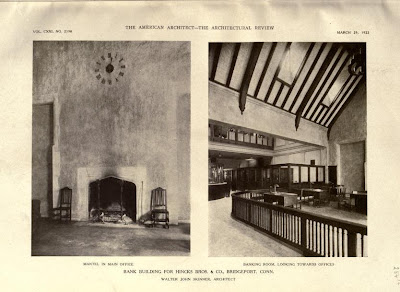 I don't know much about Skinner after this building.  He went on to become dean of the Architecture School at Georgia Tech, and there the trail ends.  Here though, it's clear that he knew how to play with traditional forms, and had a feeling for texture and materials, much in the tradition of Delano & Aldrich and Harry T. Lindeberg. 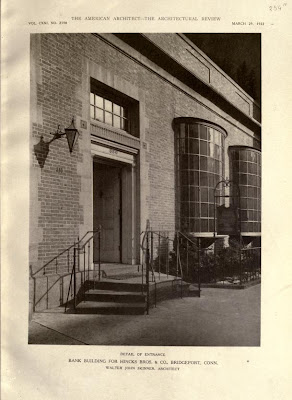 And of course, in case you didn't know, all pictures can be enlarged for better viewing by clicking on them. Posted by The Down East Dilettante at 4:30 PM

The contrast between the civic architecture (and I include bank buildings in that loose designation) of pre WWII America with what is foisted off on us today never ceases to amaze me. We, as a nation, with few noteworthy exceptions, no longer appreciate the importance of symbolism in our civic buildings, nor the impact they have on our communities. The newly-constructed Town Hall (and that's a misnomer if there ever was one) in the neighboring village to ours is little more than a shed more appropriate for storing asphalt and salt for the nearby parkway than it is for the administration of justice that is supposedly carried out within its ugly, cheaply appointed, and hideously lighted rooms. Ugh.

Reggie, I couldn't agree more. In our village, the town hall is a grand affair, white clapboard, sort of colonial, with a little Chicago World's Fair beaux art eclecticism thrown in for good measure (it was built the year after the Fair opened, and the influence is unmistakeable).

It sits on a rise at the fork of two streets, and anchors the entire village. It also now overlooks the planning and aesthetic disaster of the new Bar Harbor branch I alluded to, an old house having given its life for one of the buildings. I was on the board of our local library, a handsome neo-georgian brick, and when we renovated, I firmly and successfully fought the choice of all architects who proposed an informal addition, or closing off the traditional axial main entrance.

Here in Maine, that sort of thinking has resulted in some near comid situations. The Walker Art Museum at Bowdoin college, a small classical masterpiece by McKim, Mead, and White, now cannot be entered by its grand main entrance. One has to take a staircase underground from a little glass pavilion, and then go up a new glass walled back stair to a rear gallery. It is literally impossible to experience the building as the architects intended. This was the expensive end result of several ill begotten designs to provide necessary handicap access to the structure. The simplest and most direct solution never seemed to occur to anyone involved.

I have to agree with Reggie as well -a very sad state of affairs. Too much worry over 'cost' while so much is wasted elsewhere....
This bank is really a gem, I wonder if it could be found?
I have to admit I joined my bank for the building. It's near my office but not the most convienent location for home -but the space is lovely and very well preserved.

Stefan, I googled every different way I could think of (banks bridgeport, hincks bridgeport, architecture, etc.), but turned up nothing, then I took a Bing Maps 'flight' over downtown Bridgeport, and found no sign. Downtown Bridgeport is a sad place, with an urban renewal blighted downtown, lots of parking lots in mid-blocks where buildings used to be, lots of boxy 'plaza' buildings, lots of empty lots. sigh. It appears to be lost.

That is a lovely building, the windows are beautiful and how nice to have a fireplace in a bank.

Banking needn't be grim and purposeful, least of all in a building as nice as this one. Have you ever been inside the Piccadilly branch of Barclay's Bank in London?
All done up in a restrained version of 18th century
chinoiserie, with lacquered panels, exotic chandeliers
and a boldly patterned marble floor. It can take the
edge off the generally dispiriting business of exchanging one's dollars for pounds.

its got to be gone - nothing this eclectic or beautiful would have survived 60's urban renewal. look at downtown bangor or auburn maine. they're deserts. i like the a&c outside light and those barrel windows. also, it would be great to see a side or top view as the profile looks great too. the fireplace, minimalist clock and stucco interior - man, its all fantastic.
an even better example of entry butchery is the lewiston, maine library that now has the entry on lisbon st and the imposing greek granite temple with enormous columns on park st is closed and inside that entrance behind the front desk was a beautiful huge fireplace with intricate woodwork which now is used as a storeroom. in order to get more room, they discarded all the beauty of the place. do architects these days get training in anything besides bean counting and space saving?