ART: MR. BLANEY OF IRONBOUND, AND HIS DISTINGUISHED FRIENDS

The cliffs of Ironbound Island, in Frenchmans's Bay, with the hills of Mt. Desert Island in the background
Maine, thanks to the quality of its remarkable light and scenery, has long had a significant place in American art,  particularly and not surprisingly, landscape painting. From Alvan Fisher in the 1830's, to Fitz Henry Lane, Frederick Church and Thomas Cole in the mid 19th century, to John Marin,  Marsden Hartley, Rockwell Kent, and Thomas Bellows in the 1930's,  to William Kienbusch, Fairfield Porter, and of course, those damned Wyeths, in the 50's and 60's, many of America's best painters have passed through and left a record of our landscape as they saw it.   I have long intended to do a series of posts about the artists who have left their mark up here in our part of Maine, Down East of the Penobscot River, and today I offer the first story, about Dwight Blaney of Ironbound Island, and a few of the friends who visited him there. 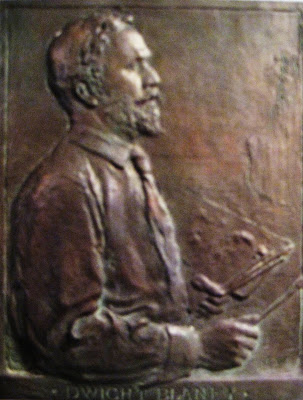 Bronze bas relief portrait of Dwight Blaney by Bela Lyon Pratt (American 1867-1917).  In his hands, Blaney holds palette and brush, and in the background are the cliffs of Ironbound Island.
Dwight Blaney was born in Salem, Massachusetts in 1865.  After attending the Chauncey Hall School in Boston, he trained as an architect, and worked for a time as a draftsman in the firm of Peabody & Stearns.  Deeply influenced by the impressionists, particularly Monet,  on a European trip, Blaney was one of the earliest of the American painters to use the new style. 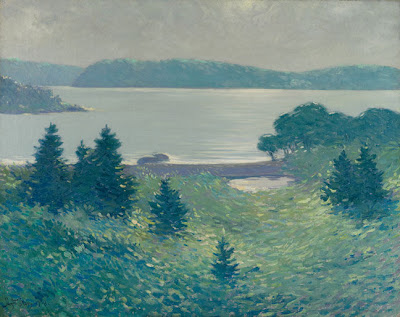 Dwight Blaney.  View from Ironbound Island To Frenchman, Oil on canvas, 1908
After marrying an heiress to the Eastern Steamship fortune, in 1880s, financial constraints were lifted, and Blaney, a convivial man of many interests, was free to pursue these with vigor.   He was one of the earliest collectors of American antiques, beginning in the 1880's, and a founder of the Walpole Society, that most exclusive of collecting clubs, whose ranks were to include Wallace Nutting and later, Henry Francis DuPont.  He was one of the first to buy and restore an early American house as his country home (in Weston, Massachusetts) His fascination with exploring the shell middens left behind by the ancient Native Americans led to one of the finest collections of artifacts of its day, and which later constituted constituted the first bequest to the new Abbe Museum in Bar Harbor when it opened in the 1920's.  After purchasing Ironbound Island, in Frenchman's Bay 3 miles off Bar Harbor as a summer home for his family, he spent the summer of 1904 studying the land snails of the Island.  From 1901-1909 he dredged Frenchman's Bay for marine mollusks, eventually identifying 149 varieties.   Two of these were new varieties, which were named for him:  Tonicella blaneyi (a chiton) and Oenopota blaneyi (a gastropod).  In 1904, he studied the land snails of Ironbound, and in 1916, he and Frederick Loomis Brewster, a palenontologist, extricated 23 varieties of mollusks from pleistocene clays on Mt. Desert.  He sailed.  And, he painted, maintaining a studio on Ironbound in the summer, and the rest of the year at the Fenway Studio in Boston from 1906-1943, a year before his death. 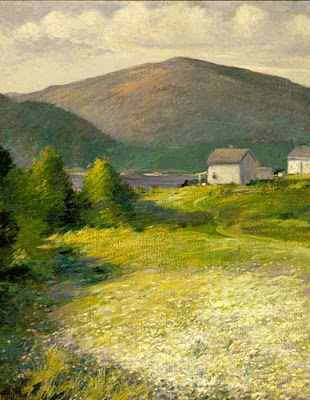 Dwight Blaney.  Ironbound Island, Oil on canvas, 1910
Although the idea behind Ironbound Island was an idyllic summer life, without the pressures of fashionable resorts, the Blaneys were nevertheless a wealthy couple with position, and Ironbound was only three miles offshore from Bar Harbor, then at its height as one of the country's most fashionable watering places.  The Blaneys partook of the social life there, their presence at parties and as patrons of events duly noted in the Society pages of the New York Times. When the fashionable world came to Bar Harbor, an invitation to Ironbound often followed. and the Blaney's guest book recorded visits by leading society figures, famous writers, a prince (Rainier I of Monaco, who came to see Blaney's famous collection of shells), and most importantly, many of Blaney's fellow artists.  And what artists they were.  Below a few of the paintings of Ironbound created by Blaney's friends on visits to his magical island: 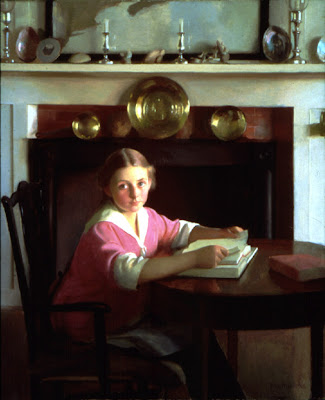 William McGregor Paxton, American, 1869-1941.  Oil on canvas, 1916.  This portrait shows Blaney's younger daughter in front of the drawing room fireplace of the main house on Ironbound, long since burned, with some of Blaney's antiques collection on display.
And there were others, including, in 1920 and 1922, John Singer Sargent, who was visiting his cousin Mary Hale at her Bar Harbor summer home, and no doubt touching base with his many clients and subjects in the summer colony.  He went out to Ironbound to stay with the Blaneys for a few days and produced seven paintings and sketches while there, of which these two below offer a seldom seen side of Sargent at rest with friends.
Although the main house burned many years ago, the island remains, with other structures, with conservation restrictions,  in the hands of the Blaney family, and is private.
Personal History:  After Blaney's death, the Dilettante's father, in the market for a boat, happened to go out to Ironbound to look at Blaney's boat,  Irona, a classic 38 footer with cabin, and purchased it.   On one mid-summer afternoon  in 1953, my parents--my mother nine months pregnant---were on that boat when it became clear that perhaps outer Blue Hill Bay was not where they should be.  Fortunately, it was a fast boat, and the local hospital is only a few hundred feet from the town dock, so I was not born on  Irona, after all  Many years later, I chanced to go out to Ironbound twice, once as the guest of a mutual friend of the Blaney's, who had been loaned one of the houses there for a long fall weekend, and again time with another friend who was visiting the Blaney's daughter Elizabeth Cram, then in her 80's.     It was a distinct pleasure to have her show me, in the amazing Ironbound guest book, along with sketches by the many famous artists to visit the island, the photos of my father taking away  Irona some 35 years earlier.
Yesterday I asked my father about Irona, and he replied, deadpan, 'yes, handsome boat.  We had a lot fun with it, your mother and I.  Probably would still have it if you and your sister hadn't been such expensive children.  Particularly you."
Posted by The Down East Dilettante at 2:22 PM

Down East -
Interesting (& educational) post - as always. Checking in to see if you ever came across the book from 40 years ago with a section on Filoli. Curious as to what it's called. Also - have you ever seen a book (or maybe a series of articles)c. 1914 called "The Twelve Best Country Houses of America"? Author of at least part of it was Henry Saylor.

Chip, the book in question was More Great House of America by Henry Lionel Williams & Ottalie Williams. I'm not sure if I still have a copy---all my office books are still packed awaiting completion of renovations. Filoli was also featured in Antiques magazine sometime in the 50's or early sixties.

I know that I've seen The Twelve Best Country Houses, but beyond that not so sure.

DED: Thank you for a lovely post. I especially like Paxton's work, and one of my favorite paintings is his "New Necklace" at the BMFA. The portrait of Blaney's daughter is a charming portrait.
I have not of Blaney before this, and look forward to other art posts.
E

Down East, so beautifully told. I am fascinated by the artists that visited the Blaney's Ironbound and their inspirations. I just ran across this Sargent photograph in a WOI, I think. He is an intrigue-what gorgeous work he achieved here. Especially the painting of Dwight. It seems the Blaney's had an idyllic summer retreat. I love the entwined elements with your own family! I am so very glad you shared all this with me. pgt

What an interesting story about your parents' trip on the Irona II, and your near birth thereon. The Sagent picture is quite unlike others I have seen by him, (the more formal portraits), and it's a joy to see the photograph of him painting.

Thanks for sharing this.

Now I know how to cure artist's block: buy an island.

Interested in your mention of the Walpole Society since the V & A has a wonderful exhibition 'Walpole and Strawberry Hill' I didn't know what to expect, not being familiar with Horace, but was enchanted by his collection precisely because it was curated/annotated by him. Otherwise I might not have found the individual paintings, porcelain, antiquities etc. so compelling. Context eh.

Since I'm going on, I have been meaning to tell you that my impressive American godmother Martha Wentworth came from Maine. She and her English husband, Derek Hill of Higgs & Hill ( the firm that built Liberty's) had a summer house on the English south coast. It was a magical place to me as a child and Martha had your East Coast written all over her which I somehow perceived before I'd even heard of your eastern seaboard! It's like V Woolf's Lighthouse to me.. but I WILL get there one day.

Maine will always be an artist's muse, to those both well known and otherwise. Thank you for introducing one who captures that northern light so well.

My fave is the breck - magic!! and the rest are monet (did i mention how much i love monet?). spectacular work in an inspirational place.

keep em coming if you have time between grifting the suckers - 'scuse me - serving the tourists.

security word def (dilletante - are you making these up?) "beambo" - gymnatis prostitute

sorry - typing with the wrong set of fingers. i meant gymnastic prostitute but the good news is now i get another word. yea!!

Another Salem native! Like Benson. They must have known each other; they're in the same generation. I'm going to go find his family house now.